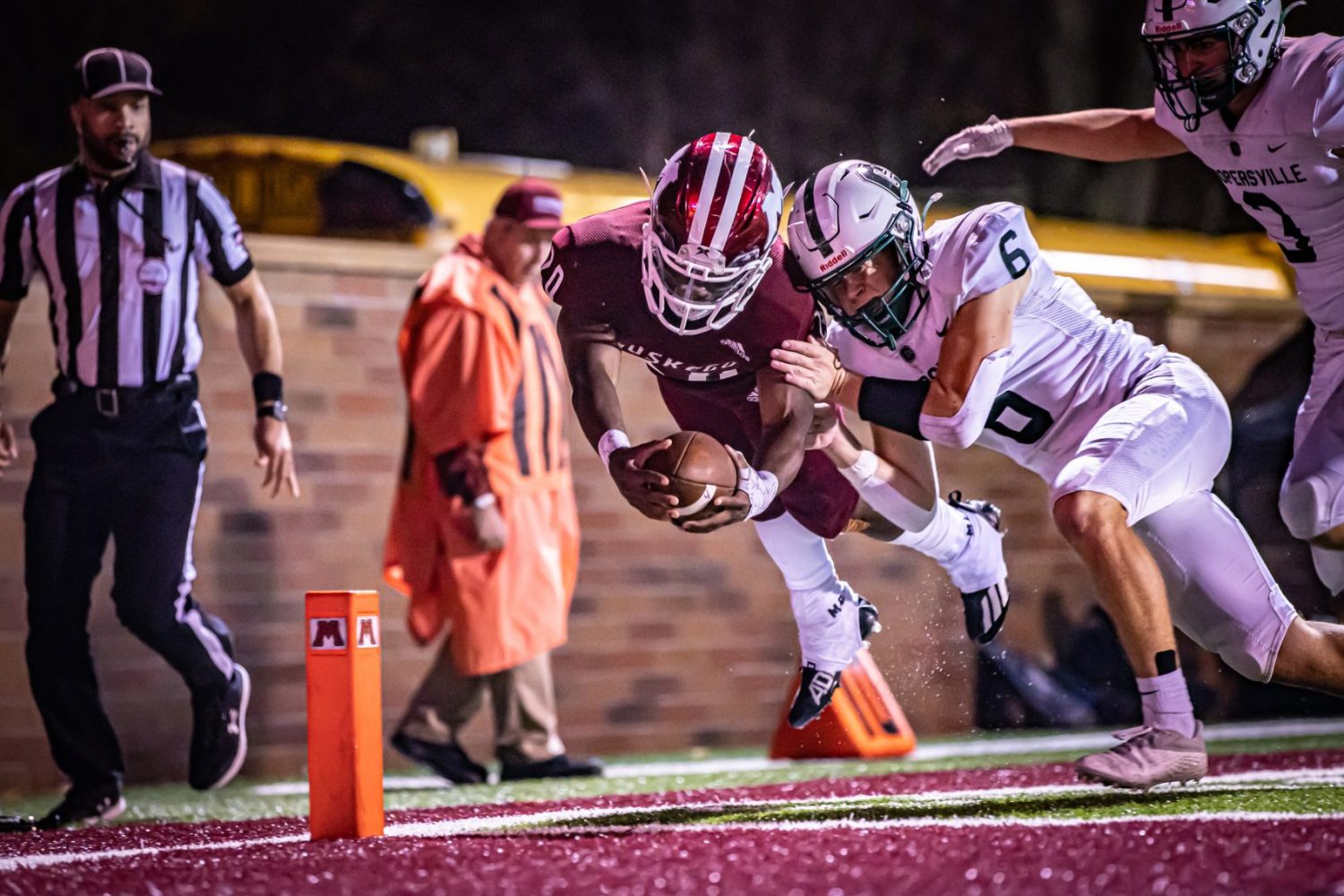 MUSKEGON–The Muskegon Big Reds have faced several deficits during the season.
On Friday night, with a Division 3 district title on the line, the Big Reds fell behind the visiting Coopersville Broncos in the first quarter.
However, the Big Reds stormed back with 40 unanswered points and cruised to a 40-14 victory.
“No flinch mentality,” Big Reds’ coach Shane Fairfield said. “We’ve kind of adopted that from Jared Pittman, a former Big Red player who came and talked to the guys like 6 weeks ago. When we were down 7, I told the guys, hey we’ve been down before. So let’s not flinch and play our football.”
Coopersville found early success thanks to the legs of quarterback Colton Bosch. Bosch, after several carries, found Nick Gordon open in the flats and he scampered around the right end for a 51-yard touchdown.
The Big Reds defense tightened up and that gave the offense time to settle in. Behind a Jakob Price 1-yard touchdown, the Big Reds evened the score with just under 5 minutes remaining in the half. Muskegon forced a Broncos three-and-out on the next drive. Junior quarterback M’Khi Guy found the end zone on an 8-yard carry with 1:13 left in the half.
In the third quarter, the Big Reds broke the game open with its big-play capability. Guy found Alyjuuan Paris open for 44-yard strike to set up a 2-yard Price touchdown. A bad punt by the Broncos gave the Big Reds excellent field position at the 40. On first down, Guy connected with junior Destin Piggee for a 40-yard touchdown reception.
Price and Guy scored on rushes of 41 and 14 to finish off the scoring for the Big Reds.
Muskegon’s offense had 358 yards. Price led Muskegon with 25 rushes for 180 yards and three touchdowns. Guy had 148 yards of total offense and three touchdowns.
The defense limited Coopersville to 138 total yards and the Broncos did not convert a third down all game. Adrian Rankin Jr. led Muskegon with nine tackles and a sack. Terrance Davis Jr. had six tackles and a sack and Amariyan Glover had six tackles and an interception.
“Years ago, I kind of got so selfish that I always said this isn’t the trophy we want,” Fairfield said. “We’d always trade it in and I think the kids weren’t able to enjoy the ride and enjoy the moment; So we started to sit back and smell the roses a little bit and have fun with the victory. We’ll just worry about next week, next week.”
Muskegon hosts Zeeland West at 1 p.m. next Saturday at Hackley Stadium. Zeeland West defeated Muskegon 38-36 earlier in the season.