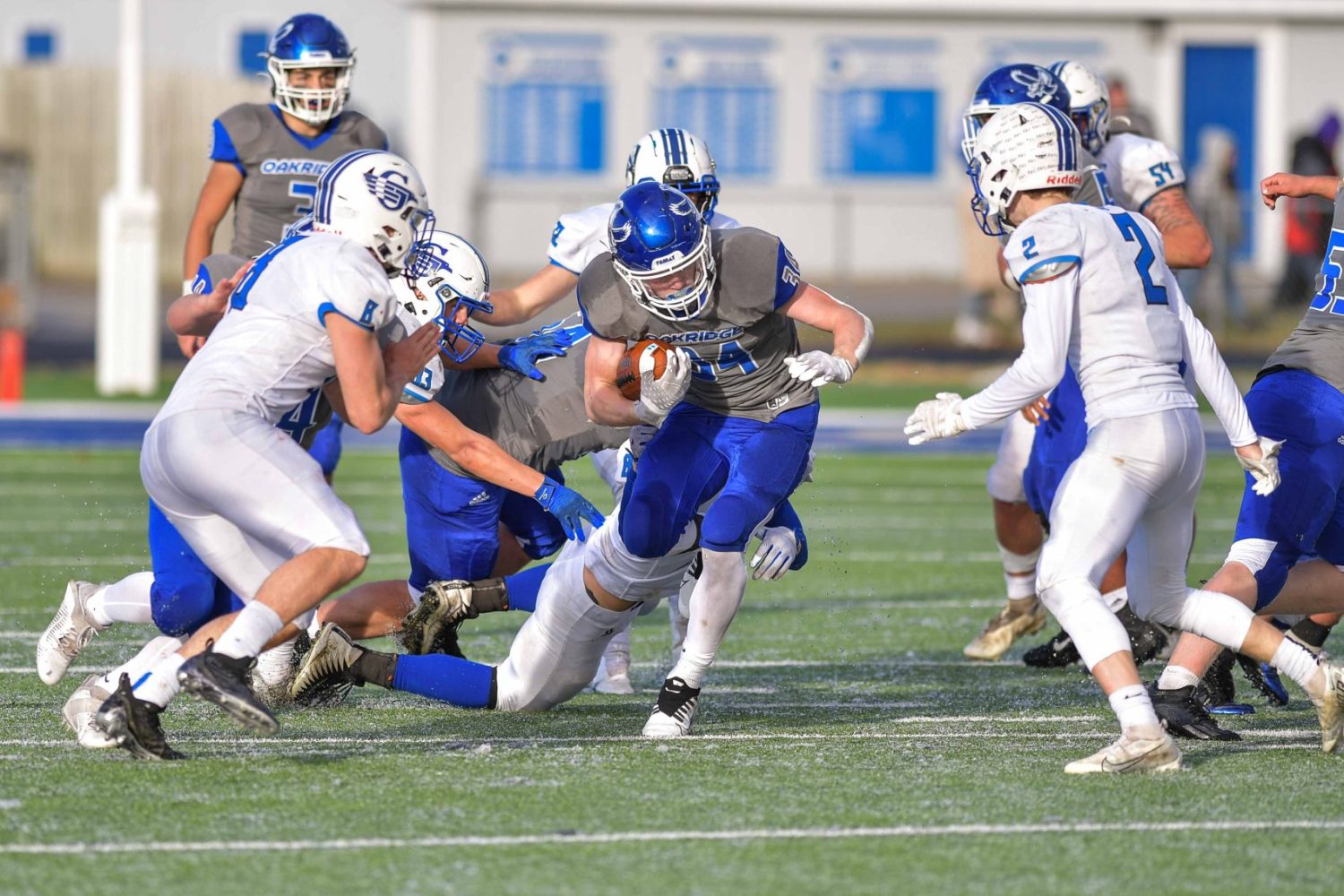 EGELSTON TOWNSHIP — It didn’t take long for the Gladwin Flying G’s to set a favorable tone for the second half.

Trailing 8-6 at the break, the undefeated Flying G’s scored on a 62-yard run on the first play of the second half and rode that momentum to a 26-8 victory over the host Oakridge Eagles (10-2).

That long run, by senior Earl Esiline, was the first of three unanswered touchdowns in the second half by Gladwin, which now faces top-ranked Grand Rapids Catholic Central in the state semifinals next Saturday at Ithaca High School.

The hard-fought opening half produced just two touchdowns, one by each team.

Gladwin (12-0) scored on the first play of the second quarter when a handoff was fumbled, bounced up in the air and senior tight end Isaac Hale caught it and stepped into the end zone.

Oakridge’s answer to that score took 14 plays and covered 70 yards. Workhorse running back Trever Jones, who rushed 26 times for 162 yards, ran the ball 12 times in those 14 plays. His 3-yard touchdown run and quarterback Matt Danicek’s run for the 2-point conversion, gave the Eagles an 8-6 lead.

Both teams were plagued by turnovers in the opening half. In fact, Oakridge’s first two drives were stopped by an interception of  Gladwin’s Kaden McDonald and a fumble recovery by Michael Tackett.

Gladwin also had a pair turnovers – an interception by Oakridge senior Lorenzo Garcia and a fumble recovery by senior Riley Beane.

“I felt good at halftime,” Oakridge coach Cary Harger said. “Ugly first half with the turnovers and the ball going back and forth.”

But along came the second half and all the momentum immediately shifted to Gladwin after Esiline’s long run.

“It’s one of those that you kind of try to blow off,” Harger said. “They read something and they wanted to take advantage of it right away. Let’s regroup and it just didn’t seem like we were able to do that in the second half.”

In the final seconds of the third quarter, Esiline scored again, this time from 13 yards out. That made it 20-8. That drive took nearly seven minutes, 14 plays and 90 yards.

In the fourth quarter, another Eagle drive ended with a fumble at the Oakridge 45. Quarterback Nick Wheeler had a 35-yard run during the drive that culminated with Wheeler’s 3-yard touchdown run.

“This time of year you have to be on point and we weren’t able to do that,” Harger said.

Besides Jones yardage on the ground, Danicek ran for 36 yards on nine carries. In the passing game, Danicek completed 6-of-10 passes for 36 yards.

“Trever is our guy,” Harger said. “In our offense, we tried to take a little pressure off him and run Matt a little bit from the quarterback spot. We tried to get our slots involved with some speed across, but then covered those edges very fast and didn’t allow us to get outside.”

Defensively, Julian Primmer had 10 tackles and Bryson Stephenson had nine and Brody Jennings had eight. Wyatt Douglas had a sack for the Eagle defense.

Gladwin’s balanced rushing attack featured Esiline with 10 carries for 145 yards, Wheeler with 14 rushes for 78 yards and Logan Kokotovich with 48 yards on 16 rushes.

Wheeler completed 6-of-9 passes for 48 yards. 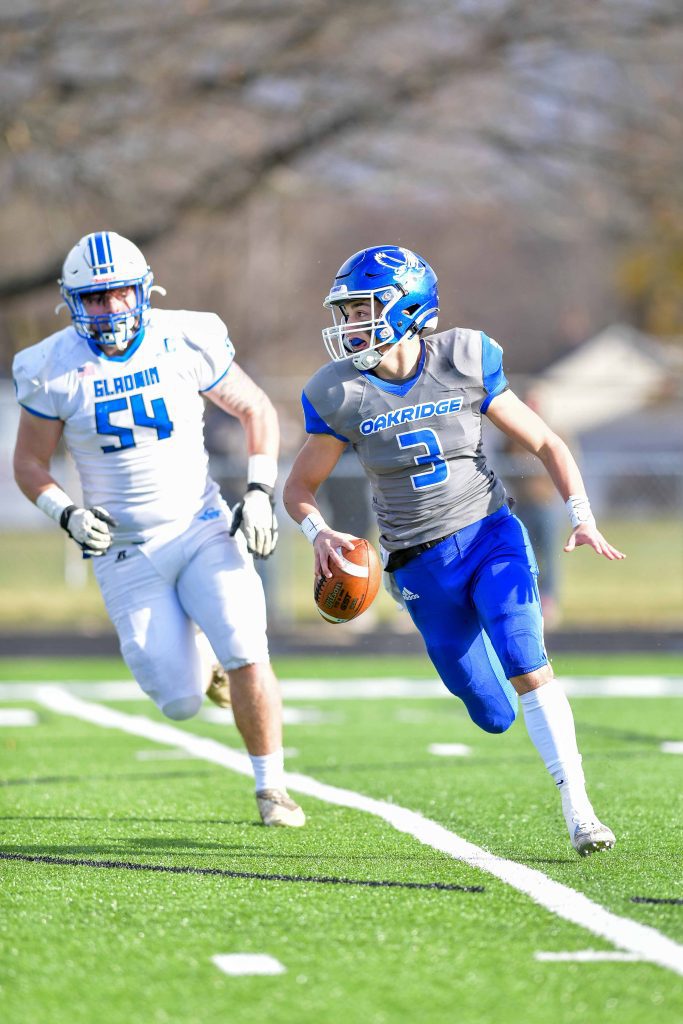 Oakridge quarter back Matt Danicek is chased out of the pocket early in the contest. Photo/Eric Sturr 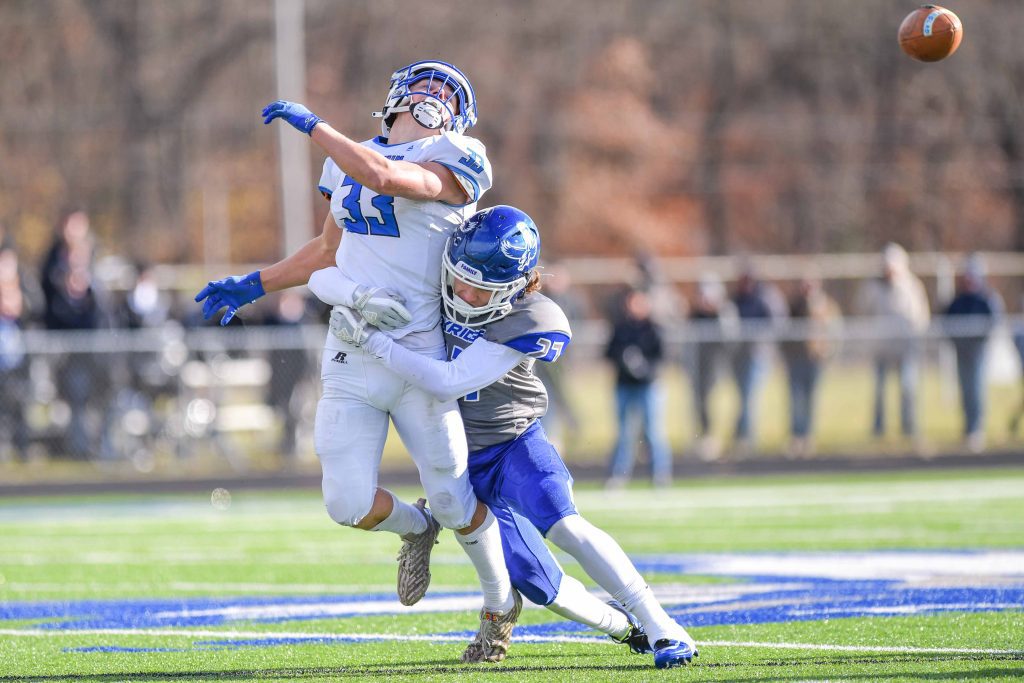 Oakridge’s Brian Elizondo puts a big hit on the Gladwin receiver resulting in an interception for the Eagles. Photo/Eric Sturr 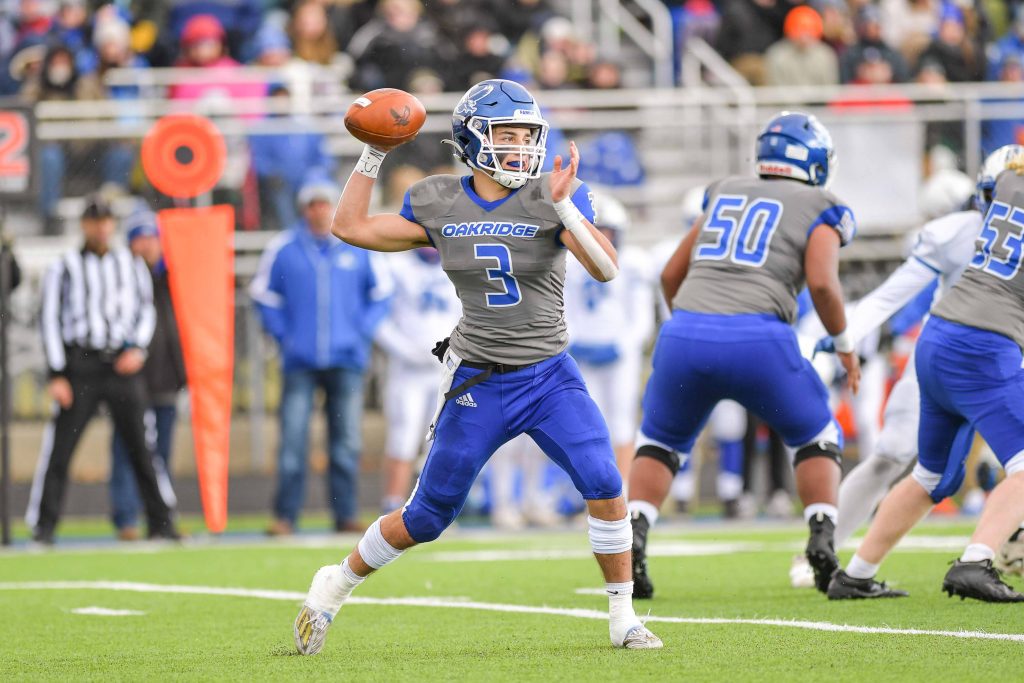 Matt Danicek fires a strike to his receiver. Photo/Eric Sturr 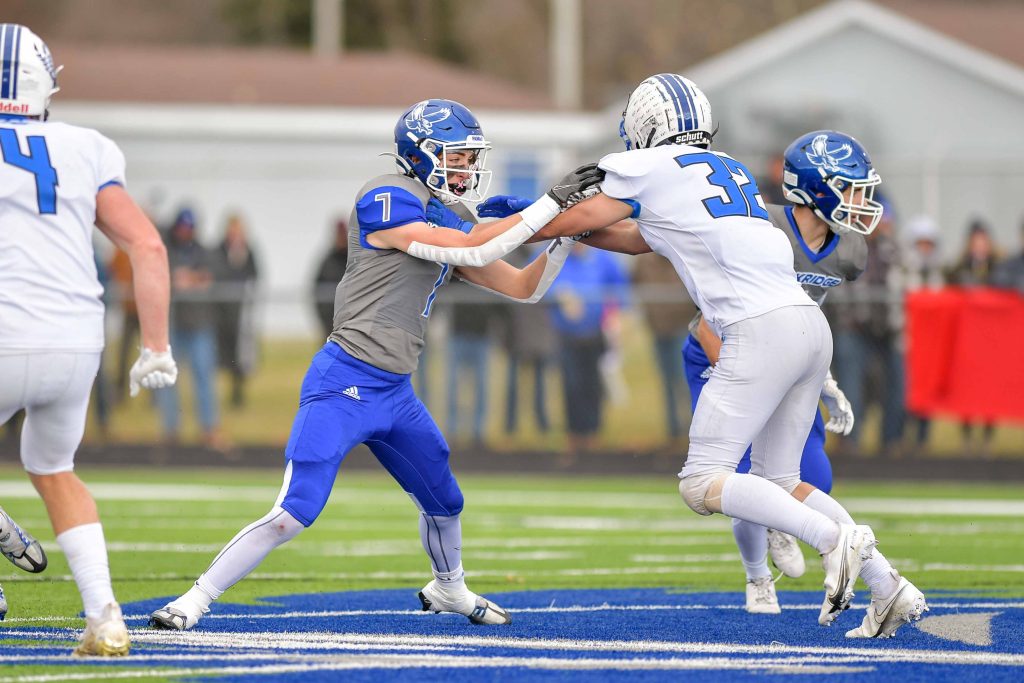 Evan Miller holds his lead block to allow Trever Jones to get around the corner. Photo/Eric Sturr 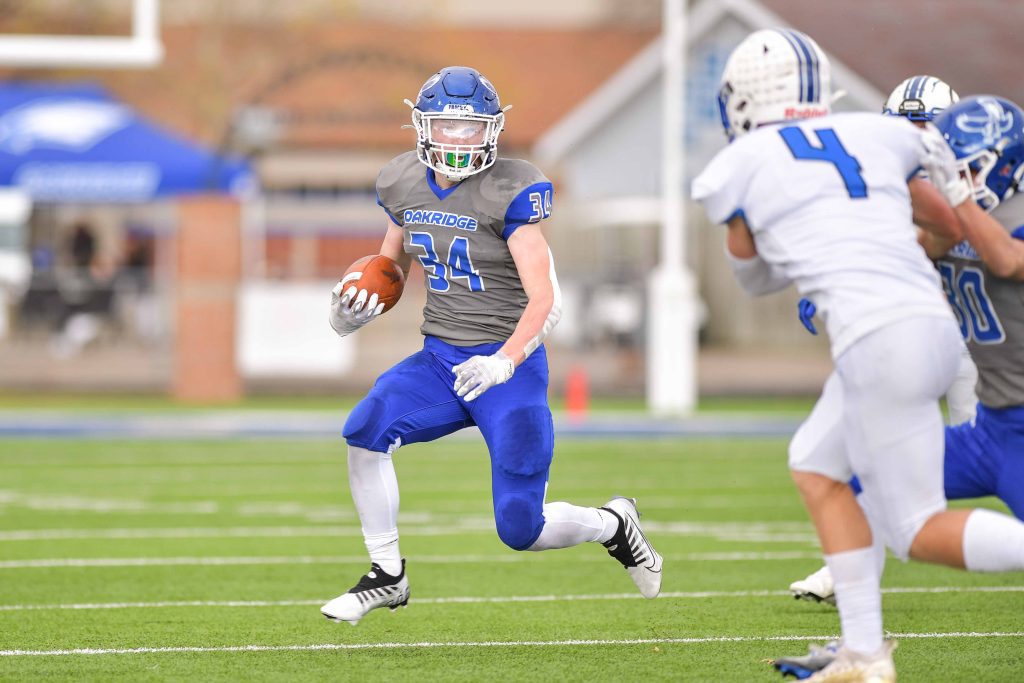 Trever Jones turns the corner for an Oakridge first down. Photo/Eric Sturr 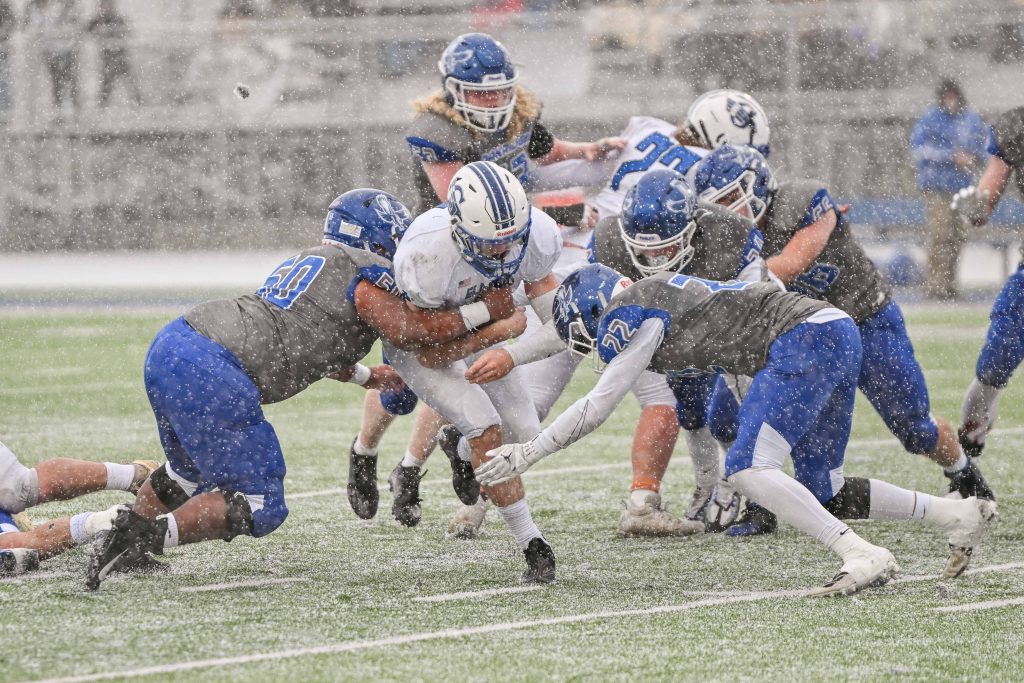 Lumberjacks kill off a slew of penalties, then rise up in the third period to beat Green Bay Gamblers 4-1