A golden anniversary of basketball glory for the Shelby Tigers 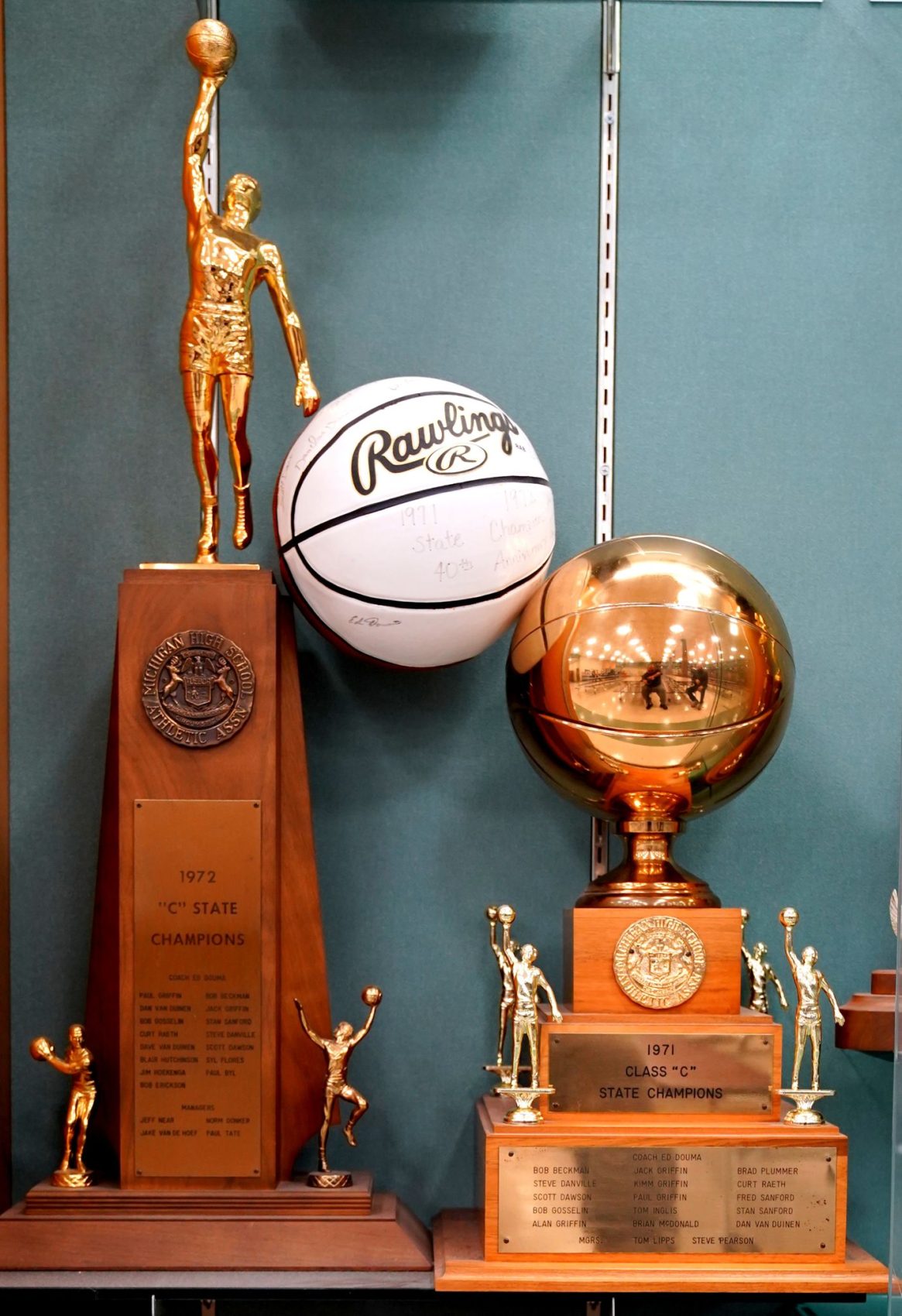 SHELBY–Basketball is different now, with the internet, cell phones and, with a few finger taps, reports from far and wide. In the 1970s, there was no YouTube, no Hudl, no social media video. There were no Mick McCabe preseason rankings of the state’s top 25 players in the Detroit Free Press to kick off the upcoming season.

Today, visually, there would be no missing Shelby’s All-State selection, Paul Griffin, who rose from a small western Michigan small town of less than 2,000 on to a college career at Western Michigan University, then a seven-year stint in the National Basketball Association. But back in the ‘70s, news travelled across the state, game-by-game, season-by-season, by way of ink splashed beneath headlines via press services in something called newspapers.

“I haven’t seen (Griffin) play,” veteran coach Leo ‘Sam Franz, told one of those services some 50 years ago, just a few days before his team was scheduled to square off with Shelby’s Tigers for the Class C state basketball championship.

For Franz, the mentor of the Saginaw St. Stephen basketball team, this was, in a sense, old hat. He had previously guided the Saginaw St. Mary basketball team to a Class C title in 1953 then led St. Stephen to the Class C finals in 1968, a championship in 1969 (and would return to the title game again in 1973). “I don’t know where he plays – we’ll just have to see what he does and go from there. We’ll have to hold him down.”

Franz, too, had an outstanding ball player on his squad – a 6-foot-4 junior named Elijah Coates. St. Stephen, 20-3 on the year, but surprisingly unranked, had just upset No. 1-ranked St. Ignace, 67-57, in the semifinals behind Coates’ 29 points. 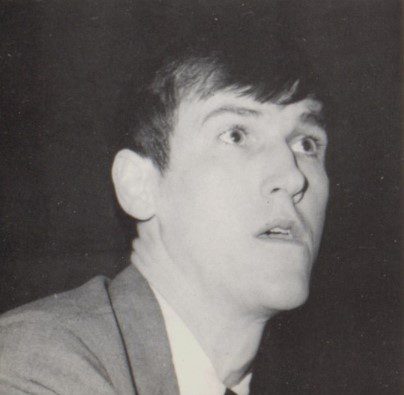 The Purple and White Tigers
Shelby was coached by Ed Douma, who landed in the district because of a college tie.

“I ended up at Shelby because I played (basketball) at Calvin College,” said Douma, recalling his start. “My coach at Calvin, Barney Steen, heard the job was open and he called me and said, ‘You should apply for this.’ I was pretty young at the time – I had only taught for 2 years at Lowell. The Shelby job was my third year and my first head coaching job. The superintendent there was a Hope grad, so there was a connection there.”

Members of the Michigan Intercollegiate Athletic Association – better known as the MIAA – the Calvin and Hope cage rivalry that dates back over 100 years, is considered one of the greatest in college basketball.

For Douma, the 1968-69 school year marked the start of an incredible coaching career that included a quick path into college ball, capped by a return to Calvin and the MIAA. The budding coach was blessed to find an ideal place to start.

“There were some pretty good players there,” Douma said. “The previous coach, Jimmy Darrow, did a really good job with a youth program. Ted Zoulek ran that program. That got a lot of kids interested in basketball and at that time there was quite a bit of talent there.”

(Ted had played ball at Shelby in the 1950s. In turn, his son, Rick, has guided the Tiger boys basketball team for over 30 years and coached the Shelby girls for 11 until the sport switched to winter in 2007-08).

Douma’s success was immediate. The Tigers posted a 13-4 mark in 1969 and a 14-2 record in 1970. However, come tournament time, both seasons ended immediately in district play with losses to Western Michigan Christian. In high school, Douma had been a starting guard on the Warriors’ 1962 Class C state title team, coached by legendary Elmer Walcott.

Ranked No 2 in the state, Shelby wasn’t really tested during the regular season, with their closest game a 79-63 win over WMC. They’d trounced their semifinal opponent, Norway by 25, 69-44 with Kimm and Paul, a junior, scoring 21 and 15 points, respectively. 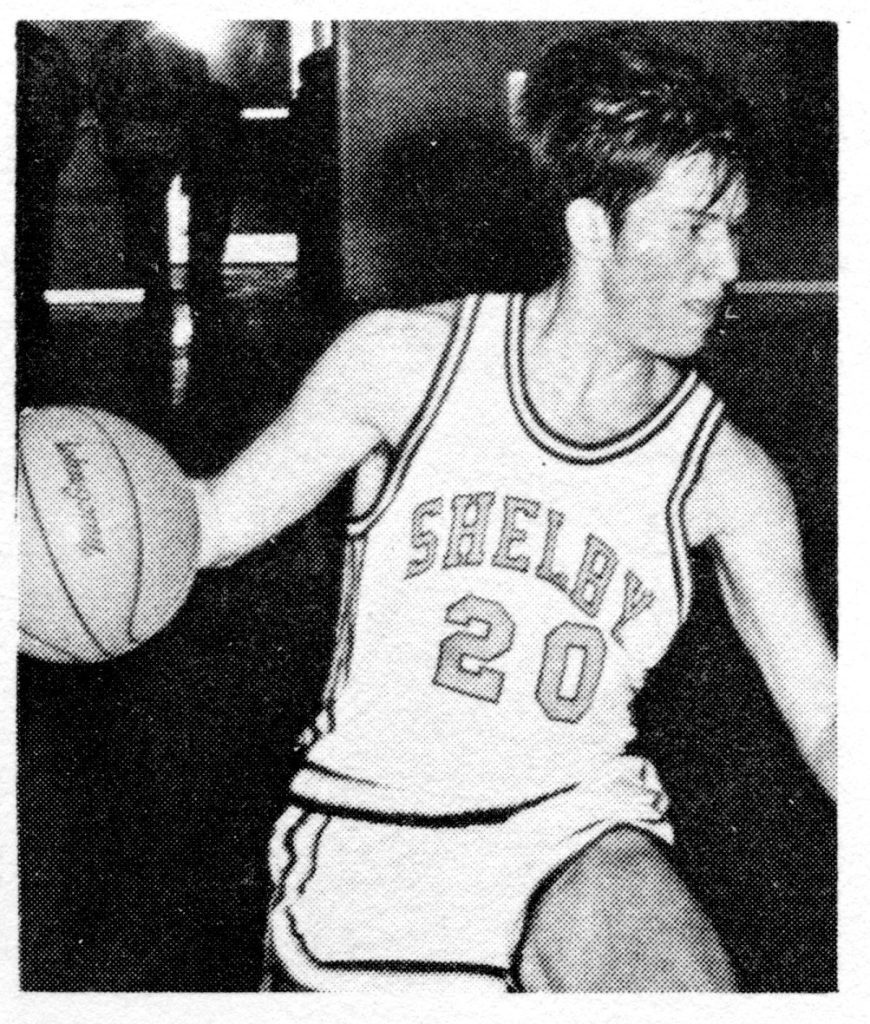 The largest challenge was expected to be the title game with Stockbridge. A dream matchup of the state’s top two ranked Class C teams, it matched a pair of unbeatens in what was billed at the time as likely “the most interesting game on the final day of the tournament.”

On paper, Coach Phil Hora’s No. 1-ranked Stockbridge squad featured a true challenge, highlighted by 6-foot-8, 200-pound junior Jesse Campbell, another consensus All-State pick. In a 95-61 dismantling of Battle Creek Springfield in the semifinals – then played a week before the championship games – Campbell posted 31 points, 30 rebounds and 11 blocked shots. The Panthers featured five starters who all averaged double digits. Stockbridge had made it to the semifinals a year previous, falling to eventual state champ, Western Michigan Christian.

“We never saw them play until we played them, (but) we knew all about him,” said Douma, chuckling. The Class C semis placed the teams in two separate locations, preventing the teams from opposite brackets from watching each other play. “I’m pretty sure I sent a couple of scouts to watch him play, but I had never seen him myself.”

After years of playing the state championships exclusively at Michigan State’s Jenison Fieldhouse, the MHSAA began a program of hosting the games at alternating sites, with the ’71 finals played at University of Michigan’s recently opened Crisler Arena.  In the end, the Class C game, scheduled for 4:30 p.m., was a mismatch. Kimm scored 10 of his game-high 22 points in the first quarter, as the Tigers dashed out to a 21-10 lead. Senior Fred Sanford, another key cog in the Tiger machine, scored 19 and grabbed 16 rebounds. Paul added 14 points, with eight coming in the fourth quarter as Shelby cruised to a 71-57 win. With Paul stationed between Campbell and the basket, the Panther star was held to 15 points on five field goals and had 15 boards.

Like with so many small towns earning a title, the post-championship celebration began immediately.

“The first parade was really remarkable,“ recalled Douma. “In those days, there was no superhighway. When you got to Whitehall, the highway ended. You would get on what they now call Oceana Drive. At that time it was 31. And literally, right north of Whitehall to Shelby, there were people on the side of the road – every possible stop. It really was incredible. It was a two-way road and they could park their cars on the side of the road and they cheered us all the way.” 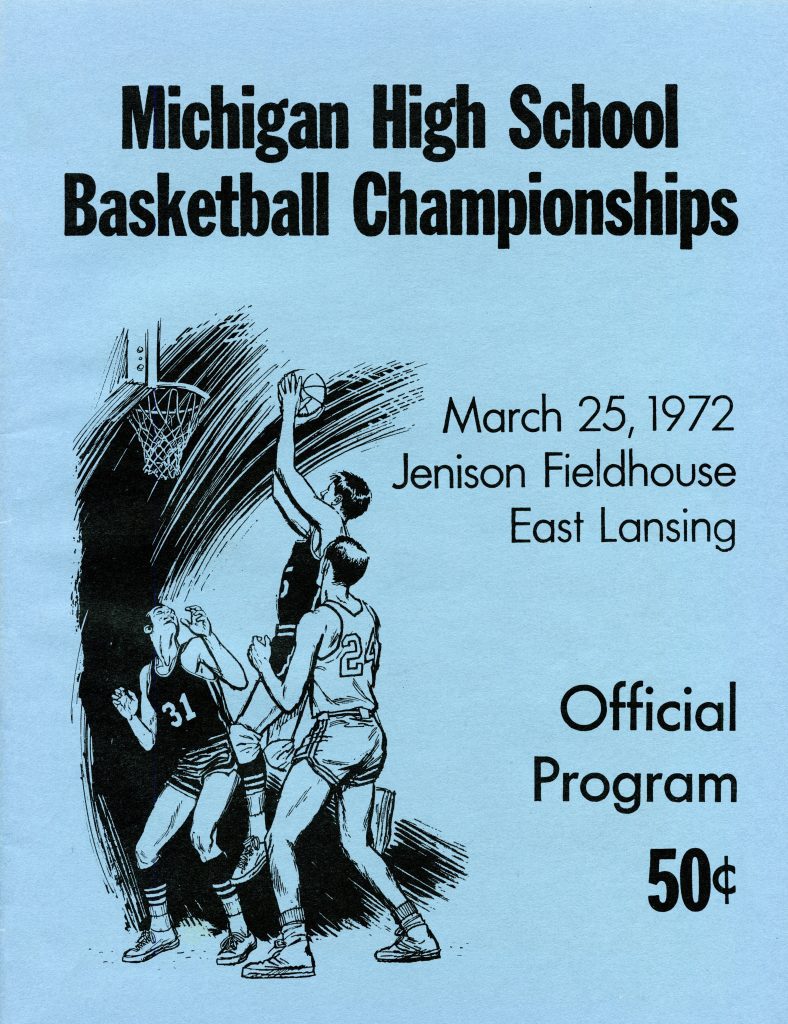 Seniors Paul Griffin and Beckman returned as starters, with Dan VanDuinen, another senior with plenty of minutes on the floor in 1971, were expected to “form the nucleus” of the squad.

“We have less experience starting out this year than last, but have more speed and we should use the fast break more often,” Douma told the Oceana Herald in early December.

No team had repeated as MHSAA Class C champions since Lansing St. Mary turned the trick in 1937 and 1938 and the challenge to do so surfaced quickly. The Tigers eked out a 69-67 win over Fremont in their second game of the year, followed by a loss to an outstanding Scottville Mason County Central team, coached by Jack Shriver, and led by Wally Claveau and Rick Smith. That ended Shelby’s streaks of 39 straight victories over West Michigan Conference rivals and 29 straight wins against all opponents. It was followed by two more losses – to Western Michigan Christian and Manistee – over the next five games.

They were growing pains that would ultimately prepare the team for the clashes ahead come tournament time.

Shelby opened the postseason with easy wins over Hart and Hesperia, then trounced Western Michigan Christian, 68-45, in the district final. Their first major challenge came in their regional opening battle with Wyoming Lee, played at Calvin College.

“They had Dale DeBruin, who was a very good player,” remembered Beckman.

The Tigers were up 54-45 headed into the fourth, before Lee, led by DeBruin, went on a 16-3 tear to snag the lead, 61-57, midway through the final frame. Shelby finally awoke with key buckets by VanDuinen and Beckman, and six free throws by Griffin in the last minutes, to escape with the win, 72-67. Griffin and DeBruin shared high scoring with 28 points apiece.

“(DeBruin) ended up playing at Western with Paul,” added Beckman.

The team had an easy time with Fennville to win the regional, but the quarterfinal game with Bangor, the first MHSAA final-rounds game ever at Muskegon’s L.C. Walker Arena, was anything but easy. A thrilling physical battle of big men, Shelby escaped with a 68-61 win, played before an overflow crowd of 5,400.

“He was big and strong,” said Beckman, remembering the tangle.

The pair had each fought their way to 14 rebounds during the first three quarters, with Griffin holding a single point scoring advantage, 27-26, during the span. With 58 seconds gone in the fourth quarter, and the game tied 49-49, Cloud was whistled for a charge.

“They both had four fouls. (When) Walt got his fifth foul, that helped us finish them. They were a very good team.”

It was only the second loss for Bangor, and the first time Cloud had fouled out in his high school career.

The Tigers soared past Orchard Lake St. Mary, 71-56 in the semifinal. Griffin finished with 35 points, while junior Bob Gosselin added 13.

Casting Lifetime Connections
The last game of the day, the Class C title game didn’t tip off until nearly 9 p.m. and was played before 12,500 at Jenison. Shelby held a 10-point lead early in the fourth, but saw it disappear as St. Stephen rallied for 13 of the next 16 points to tie the game at 56-56 with 3:31 left to play. But a free throw by junior Jack Griffin, (Kimm’s brother) followed by a 14-5 run by the Tigers in the final minutes allowed Shelby to repeat with a 71-61 victory. Double-teamed most of the night, Paul finished with 23 points, followed by 17 from Beckman and 15 by VanDuinen.

Again, the postgame celebration was glorious, with a gathering at the gym.

“It was unbelievable,” Beckman said, who would later coach basketball at Hart. “The gym was just packed. It wasn’t just Shelby people, there were Hart people, and Montague people and everybody in our league and area.”

The players have friendships that last a lifetime.

“We still get together every summer and play golf. This has been going on for years and years,” noted Douma.

Like his cousin, Paul Griffin received All-State acclaim. College offers flowed in from Michigan, Michigan State, University of Detroit, Weber State, and University of Toledo, among others. In the end, he selected WMU, as he felt most comfortable with the coaching staff.

Douma, too, was courted, receiving coaching offers following the season. That May, he accepted the freshman basketball coaching position at Western Michigan University. It was the start of a college coaching career that spanned 34 seasons, stops at seven schools, and included 555 victories and a NCAA Division II National Championship at Calvin in 1992.

“You gotta have leadership that knows what it takes to win,” said Beckman, summing up the run. “We definitely had that.” 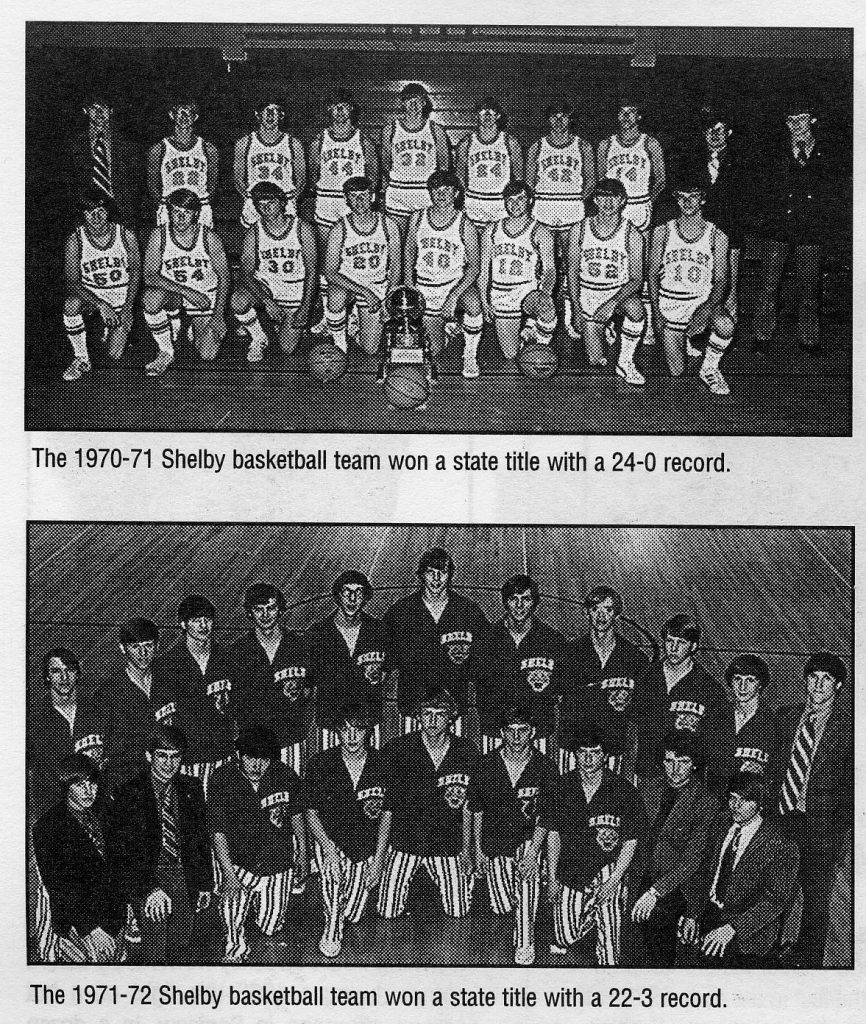