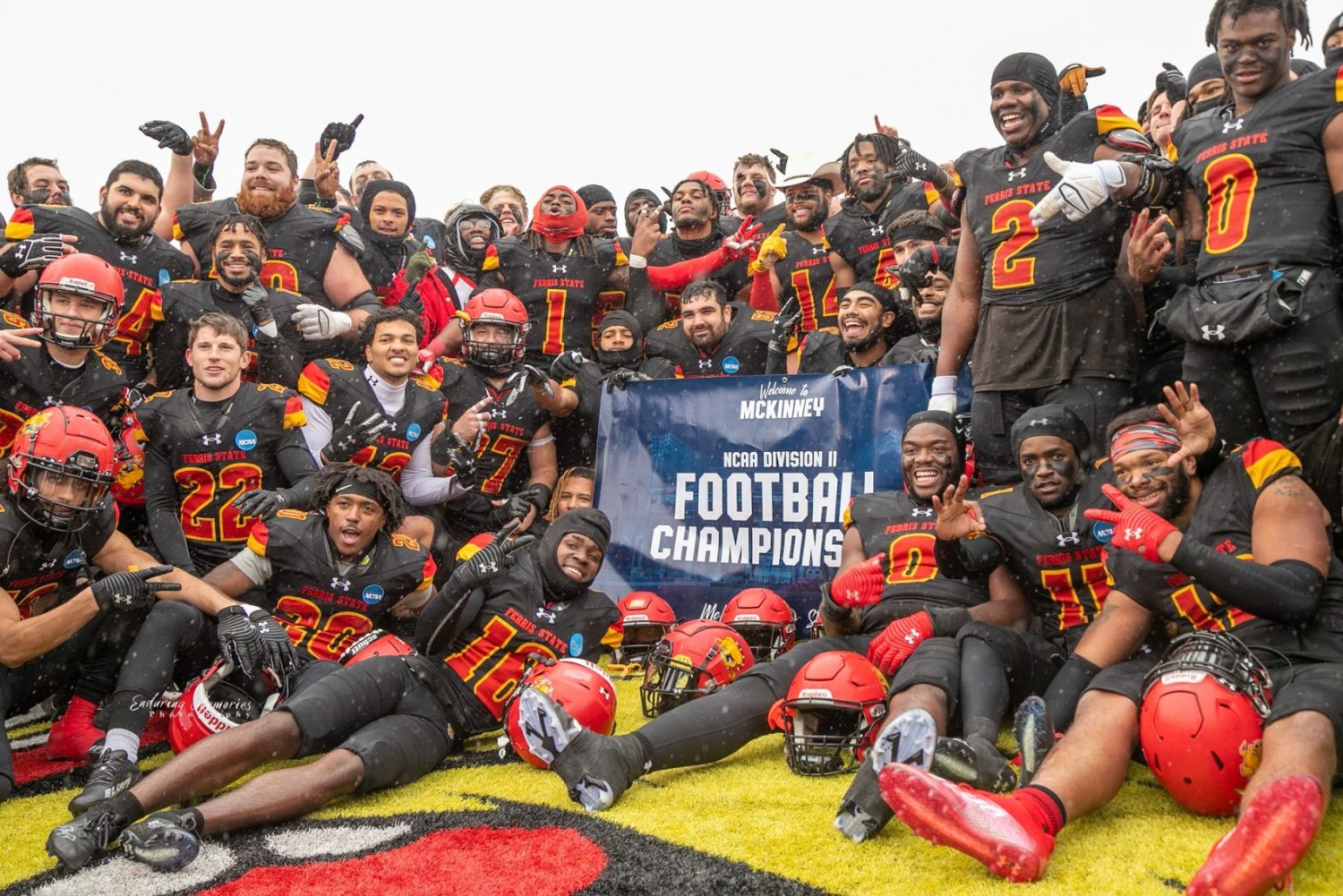 BIG RAPIDS- – For the second consecutive year and the third time in the last four seasons, the Ferris State University Bulldogs are headed to the NCAA Division II National Championship Game in Texas.

The Bulldogs rolled up 309 yards rushing and outscored the Argonauts 21-0 in the second half to improve to 13-1 overall this year. With the win, FSU has an opportunity to defend its national championship Saturday at the McKinney ISD Stadium in McKinney, Texas.

Ferris State opened the game strong as the Bulldogs drove 69 yards in 13 plays to score on their first drive with redshirt freshman quarterback Carson Gulker rambling in from 3 yards out for his first of three TDs on the day.

West Florida responded with a nine-play, 71-yard drive before settling for Griffin Cerra’s 23-yard field goal, which cut the lead to 7-3 with 4:13 left in the first frame.

The Bulldogs answered with a 64-yard jaunt and needed only four plays to push the score to 14-3 on Gulker’s one-yard keeper late in the opening period. FSU then added a 28-yard field goal from freshman Eddie Jewett only 50 seconds into the second period to push the advantage to 17-3 following a short drive after a key defensive stop.

However, in the second quarter, West Florida scored on a pair of possessions to knot the game up at 17-all at halftime. The first came on quarterback Peewee Jarrett’s 58-yard scoring throw to wideout David Durden. Later, Jarrett added a 10-yard scoring run to finish a seven-play, 73-yard drive that tied the game up.

The second half, though, belonged to the Bulldogs. After stopping West Florida on the first drive of the second half, the Bulldogs moved 66 yards in nine plays on a drive that lasted more than four minutes, reclaiming a 24-17 lead on Dezmin Lyburtus‘ 3-yard run with 4:46 left in the quarter.

The Bulldogs later added a pair of fourth-quarter scores to put the game away. FSU used the short field and Gulker reached the end zone for the third time only 31 seconds in the final quarter to finish off a six-play, 36-yard march, giving FSU a 31-17 edge.

Finally, the Bulldogs drove 38 yards in five plays and sealed the win with Marcus Taylor‘s 9-yard scoring run midway thru the final stanza.

Overall, Ferris State totaled 400 yards of offense to 298 for the Argonauts. FSU finished 6-of-10 on third down while scoring six times in seven red zone opportunities. The defensive also came up with five sacks and forced a turnover.

Taylor led FSU with 181 yards rushing on 20 carries in the game while Gulker added 18 carries for 64 yards and three scores. He split time with Mylik Mitchell, who completed 8-of-9 throws for 87 yards and added 34 rushing yards. CJ Jefferson, from Muskegon, led the receiving corps with five grabs for 51 yards.

For West Florida, Jarrett completed 9-of-16 throws for 185 yards and a score. Shomari Mason led UWF on the ground with only 36 yards on 10 carries as FSU held one of the nation’s top rushing offenses to only 113 yards on the ground. Durden caught three balls for 98 yards as West Florida finished the year with a 12-2 overall record.

The Bulldog defense was led by Major Dedmond with 12 total tackles. Konnor Near added six stops. FSU’s Caleb Murphy finished with a sack, 1.5 tackles for loss and a forced fumble in the win.

The contest pitted each of the last two national champions as West Florida had defeated FSU in the first-ever series matchup in 2019 in Big Rapids to win the program’s first national title. The Bulldogs claimed the 2021 crown with a perfect 14-0 record.

Ferris State will face Colorado Mines in the national championship game Saturday in McKinney, Texas. Kickoff is set for 1 p.m. on ESPNU.