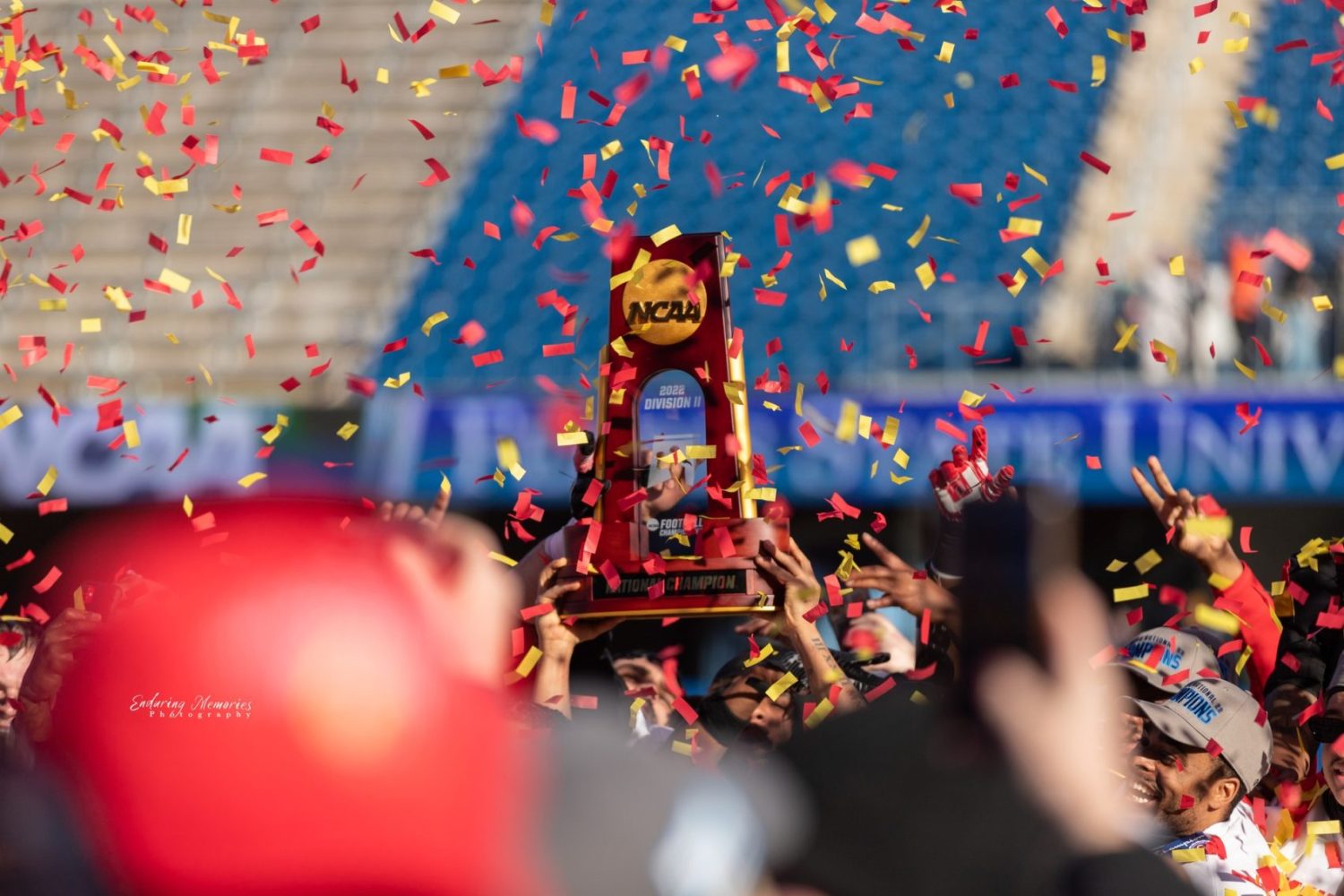 FSU built a 27-0 first-half lead and cruised to the victory, capping off back-to-back national championship seasons under head coach Tony Annese. FSU closed the year with a 14-1 overall record and now owns a 28-1 mark over the past two title seasons.

The Bulldogs, who were playing in their third national championship game in the past four seasons, totaled 432 yards of offense in the game and held one of the nation’s highest scoring offensive units to only 212 total yards, including only 21 yards and two first downs in the opening half. Ferris State totaled 214 rushing yards in the win. 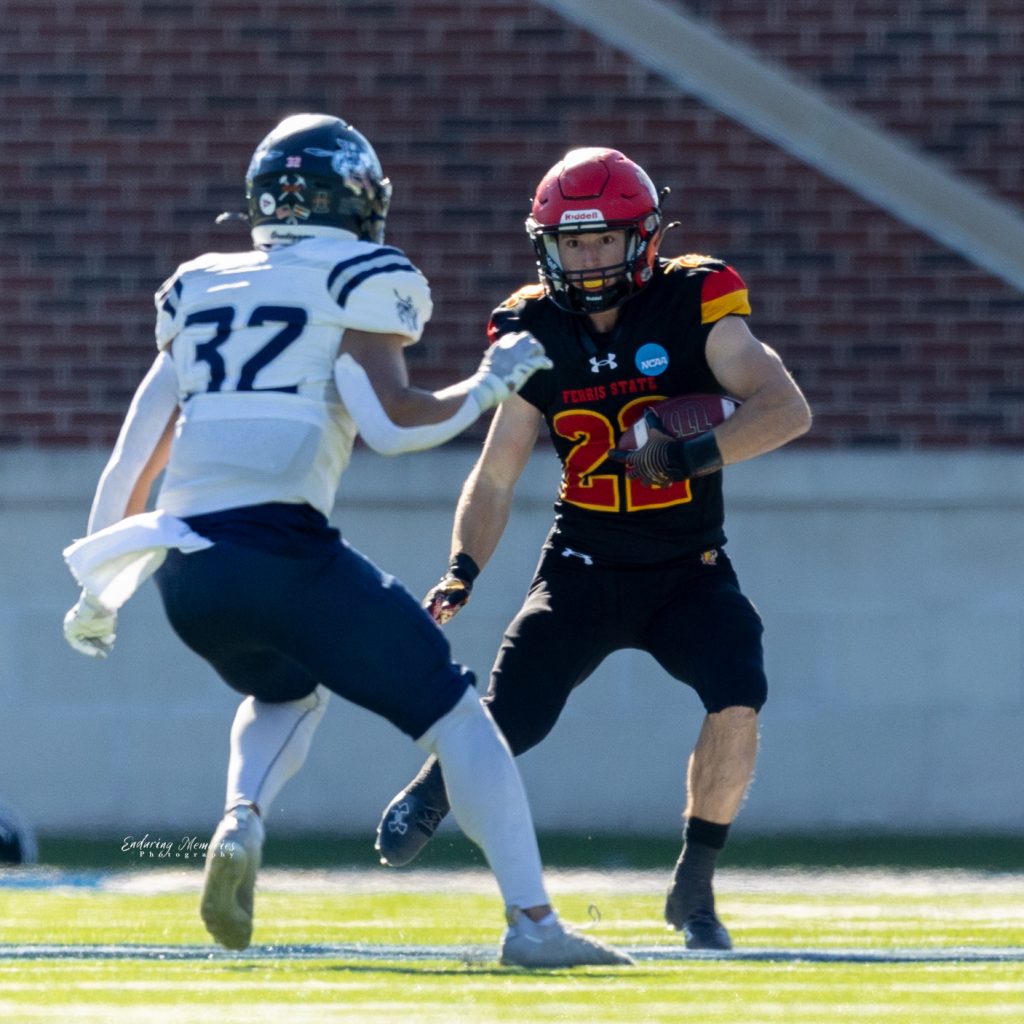 Ferris State started the game strong as the Bulldog offense drove 79 yards in seven plays on the opening drive with quarterback Carson Gulker notching his first of three rushing touchdowns in the contest on a two-yard blast, giving FSU an early 7-0 lead.

The score stood until the second frame when the Bulldogs tallied 20 points to push the advantage to 27-0 at the break. Freshman kicker Eddie Jewett booted a pair of field goals in the stanza. His first one, from 33-yards away, completed an eight-play, 41-yard drive. The second, a 22-yard field goal, finished a five-play, 52-yard jaunt to make it 13-0 with 8:56 left in the half.

The Bulldogs got the ball back with five minutes left in the opening half and drove 75 yards in eight plays to find the end zone. Junior slot receiver CJ Jefferson raced around the left side on the pitch and scored on a 19-yard run with only 32 seconds left in the period to push the margin to 20-0.

Ferris State then came up with a big defensive play as senior cornerback Sidney McCloud intercepted a pass that bounced off a Mines receiver and raced to the end zone on a 31-yard pick six with 23 seconds left. 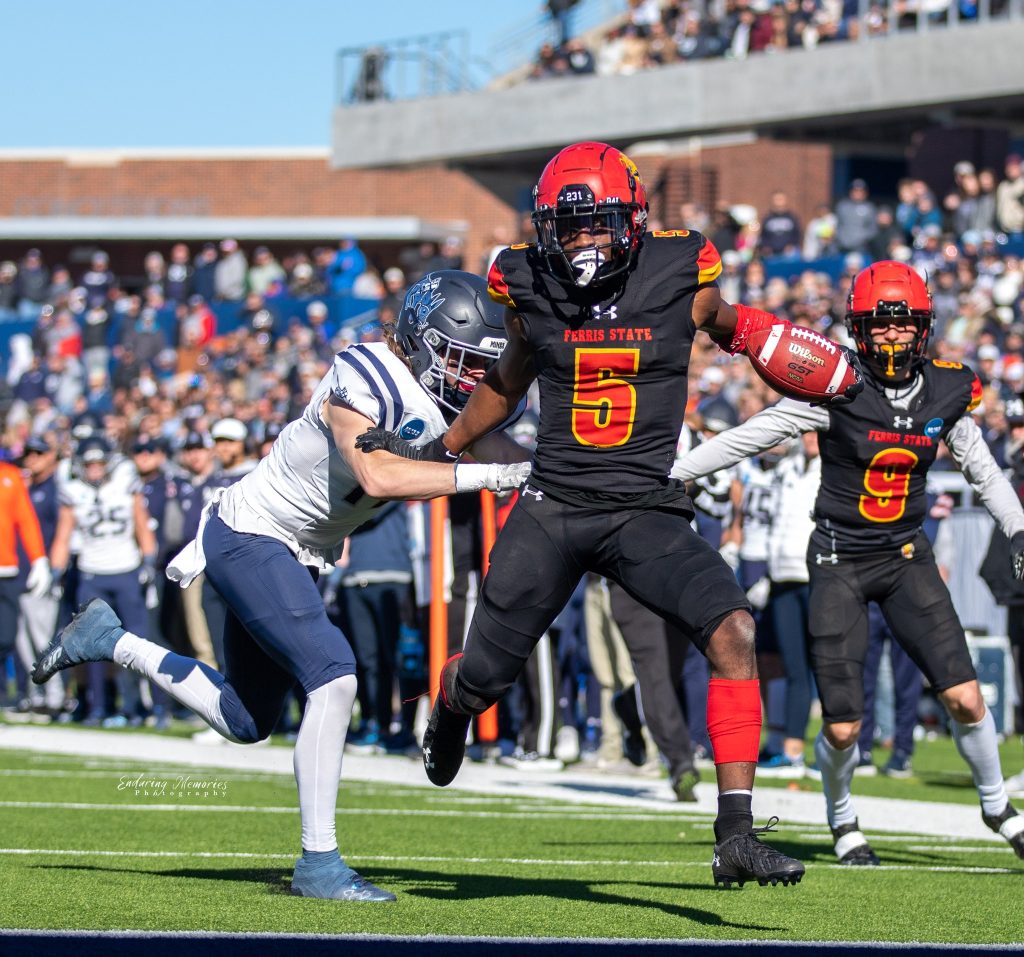 While Mines found the scoreboard twice in the second half, the Bulldogs responded each time with scoring drives of their own. The first points of the third quarter came from the Orediggers with 1:02 left in the period on John Matocha’s 10-yard throw to tailback Michael Zemen, finishing a nine-play, 85-yard scoring drive.

The Bulldogs answered as Ferris State drove 75 yards in nine plays and Gulker reached the end zone for the second time on a one-yard carry with 12:12 remaining in the game, making it 34-7 in FSU’s favor.

The Orediggers put up their second touchdown with 6:24 to play when Matocha found Josh Johnston on a 14-yard scoring throw on a three-play, 53-yard drive.

Ferris State’s final score of the afternoon capped the scoring with 4:24 to go when Gulker powered his way up the middle behind the Bulldogs’ offensive line on a six-yard TD run. It capped a four-play, 37-yard scoring march. The touchdown run was Gulker’s 31st of the season and represents the most rushing touchdowns ever in a single-season for a Division II quarterback, breaking the record of 26 set a year ago by FSU’s Jared Bernhardt in the Bulldogs’ first national title campaign. 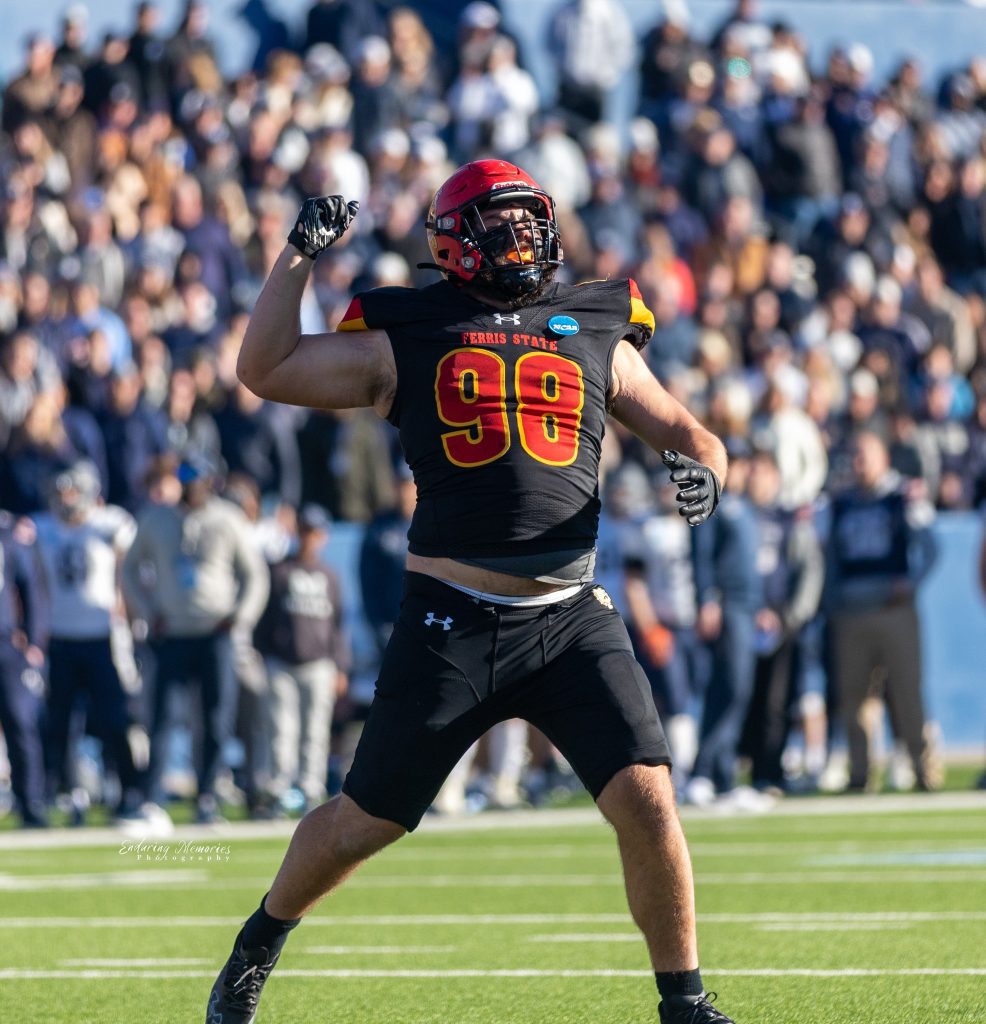 The Bulldogs were led on the ground by senior back Marcus Taylor with 103 yards rushing on 13 carries. Quarterback Mylik Mitchell completed 14-of-18 throws for 170 total yards. In the receiving game, freshman Brady Rose hauled in five balls for 83 yards and Jefferson had six catches for 71 yards. Rose also ran for 39 yards on five carries and completed a pass for 48 yards in the win.

Defensively, the Bulldogs held Matocha, the Harlon Hill Trophy winner, to 22-of-38 passing for 208 yards and two scores. He was sacked six times. Zemen led the Orediggers with eight carries for 26 yards while Johnston had six catches for 85 yards and Tristan Smith added six grabs for 42 yards.

Ferris State was led defensively by senior safety Cyntell Williams with six tackles while senior defensive tackle Jordan Jones added five stops, including two sacks and 2.5 tackles for loss. McCloud had four stops and a pass breakup in addition to his interception return for a score.

The Bulldogs became the first Division II school to win back-to-back National Championships since Northwest Missouri State in 2015 and 2016.