Tomas Holmstrom officially announced his retirement from the Detroit Red Wings on Jan. 22. 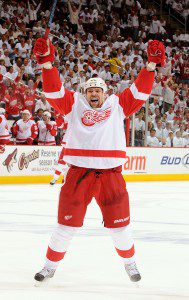 It signaled the end of a long, bruising 15-year career in which Holmstrom appeared in more than 1,000 games with the Wings.

“It was my knees, the wear and tear and the pain,” said Holmstrom, who was in Muskegon on Saturday night as part of the Muskegon Lumberjacks’ Red Wings Night. “I feel good about my decision. I feel  great, there no more banging on the knees. Now it’s just tennis and I can rest 2-3 or even four days.”

He’s staying busy in retirement, but he still hangs out at the hockey rinks. Only nowadays, it’s with his kids and their teams.

“We have something every day except Wednesdays,” said Holmstrom.

As a player, Holmstrom went long periods of time without seeing his kids. Between his practices, games and road trips and the kids hectic schedules, there,  at times, were weeks he didn’t see much of his kids.

That means anything beyond coaching his sons’ hockey teams will have to wait.

Some of his fondest memories were winning four Stanley Cup championships, hanging out with his teammates and hanging out in front of the net looking for a loose puck he could bang into the opposing team’s goal.

“The highlights were the four Stanley Cups” Holmstrom said. “And each was different  in their own way. The first one, I didn’t play that much, but still, we hadn’t had the cup in 40 years. There was the parade and the millions of people on Woodward Avenue, it was crazy.

Holmstrom was called upon to do a lot of the dirty work along the boards, behind the net and in front of the net. The bumps and bruises from that banging took a toll, but it was a role he relished.

“I didn’t mind it at all,” he said. “I never thought twice about going to the net. You know sooner or later the puck is going to come to the net. Sometimes you get beat up, sometimes you take the puck and score a goal or draw a penalty. I miss that.”

And now that he and Nicklas Lidstrom have retired, there is a new look to the team.

“There are a lot of good hockey players in Detroit,” Holmstrom said. “I am sure they will keep going with the great tradition they have in Detroit.”

“I really like the way he plays,” Holmstrom said. “He’s more my style. He works hard and gets in there. I think he is getting better and it’s great to see he signed and will stay in Detroit. I was happy to see that. He is a really teammate.”

Of course, Holmstrom would still love to be part of the team and the teammates, but after 15 years, the time had come to step away.