There’s good reason for that. 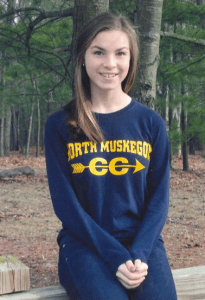 As a freshman in 2011, the North Muskegon runner finished 34th overall at the Division 4 state finals, barely missing All-State status.

Last fall she improved to 14th overall to win All-State honors as a sophomore.

So this year she had every reason to believe that the sky was the limit.

But so far she’s experienced some ups and downs, and she’s planning to get back on track Friday at the Greater Muskegon Athletic Association City Meet at University Park Golf Course.

Lowe opened the season with a lackluster time of 20:39 at the Benzie Central Invitational. That wasn’t too surprising, since it was early in the season, and she had taken a month away from her summer training regimen to tour France with her classmates.

A few weeks later, at the Michigan State Invitational, Lowe started to show definite progress. She turned in a time of 20:17, which had her ranked 19th in the state in Division 4.

Two weeks ago she cut 10 seconds off that mark, running a season-best 20:07 at the Allendale Invitational. That time left her ranked 17th in the state.

But she hit a bump in the road last weekend at the Portage Invitational, turning in a mark of 20:27.

North Muskegon Coach Dave Waterstradt said conditions were muggy and all of the runners were kind of sluggish in Allendale. He also said Lowe had stayed out a bit late the night before, since her school was celebrating Homecoming.

Lowe pleads guilty to that charge.

“I decided to stay out later and go have run rather than go home and go to bed early like I should have,” she said, explaining that a close friend was in the Homecoming court, and she wanted to enjoy the night with her.

“I was disappointed with my time, but it made me want to go harder in the next races.”

Lowe said she will have plenty of motivation at Friday’s city meet, competiting against a lot of familiar faces from local schools.

“I’m excited,” said Lowe, who finished among the top 15 runners at last year’s city meet. “It’s definitely one of the best races of the season. We’ve all been racing against each other our entire high school careers, so it will be interesting to see where everyone is at.”

Running has been second nature for Lowe since she was a small child.

“My dad has always been a big runner,” Lowe. “He runs road races. I think he ran in the Boston Marathon a long time ago. I started running with him when I was really little. He’s been a really big influence.”

Later she participated in the “Girls on the Run” program for elementary students, and decided to join the cross country team in
middle school.

The problem was that North Muskegon really didn’t have a middle school team. It was just Lowe and one classmate, and they had no idea how they might stack up against other kids their age.

Lowe found out how she compared in a hurry, and it was good news.

“We realized when we started winning, all by ourselves, that we could be really good,” she said.

She’s been a lot better than good in high school.

Running with a group of standout upperclassmen as a freshman, she finished 34th individually at the state finals while her team took second in the state. And last year she broke through to win All-State honors for the first time.

She said the older girls on the state runner-up team taught her a lot about hard work and dedication.

“They showed me what you could accomplish if you keep working hard, and what can happen if you don’t put in the effort,” Lowe said. “They were always pushing me to keep up with them to be the best I could.”

That’s the kind of leadership Lowe is trying to provide for her teammates this year. Before the season she had the rare honor of being chosen as a team captain as a junior.

The Norse have a young girls team this year, and expectations haven’t been high. But Lowe said her teammates have been improving rapidly.

“They’re doing awesome, they’re really improved a lot,” Lowe said. “I definitely want all of my teammates to go with me to state. Our times have been a little bit off lately, but we were talking to our coaches, and they said that if we can improve and hit certain times it might be possible to get everyone there.”