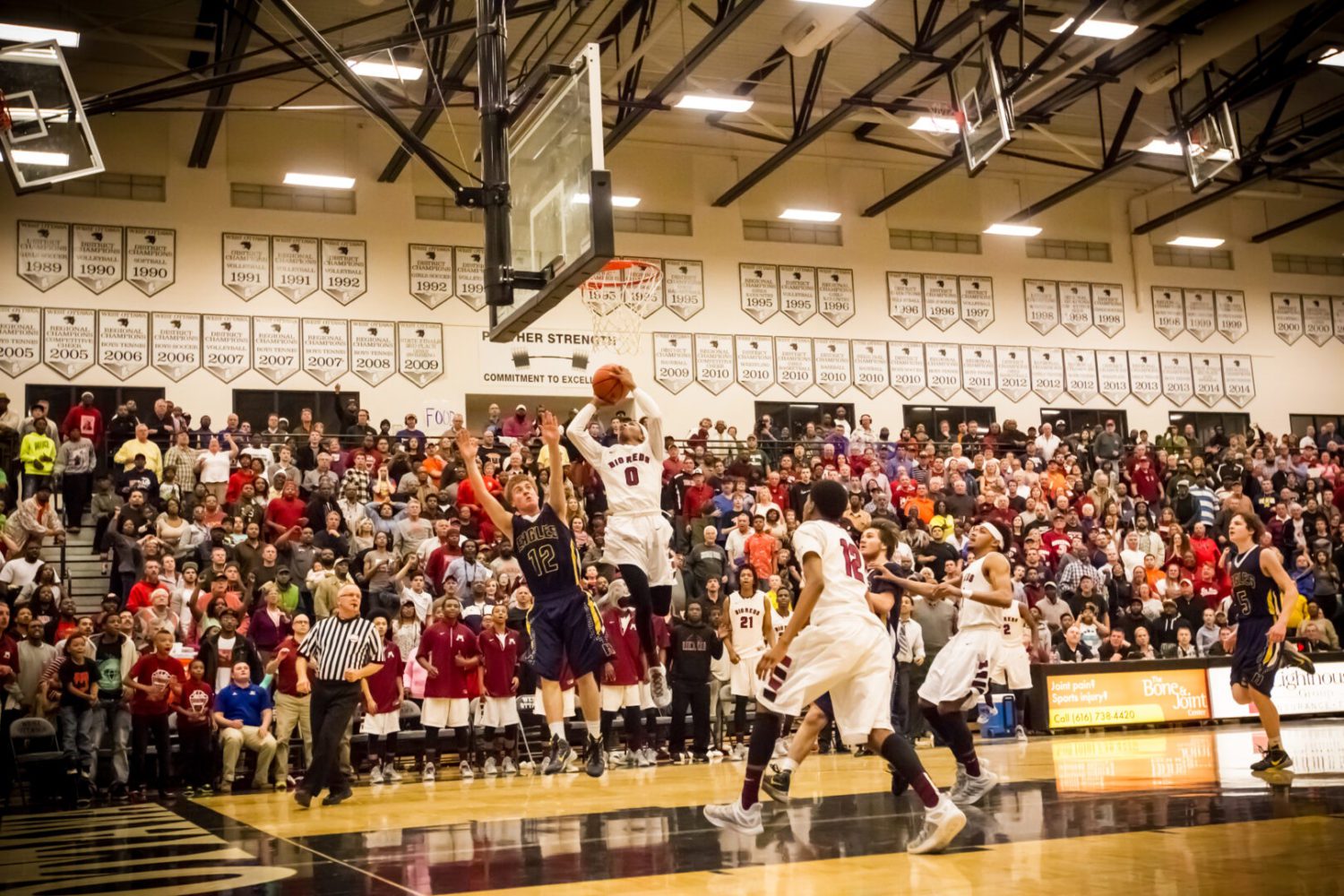 HOLLAND — In a game deserving a Hollywood script, it was a player nicknamed “Hollywood” who stole the final act. 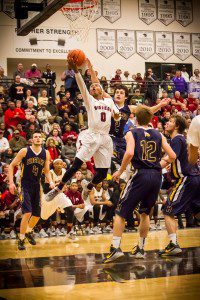 Muskegon’s Michael Littlejohn drives to the hoop among a host of Hudsonville defenders. Photo/Tim Reilly

With the victory in the remarkable marathon, before a standing-room-only crowd, the Big Reds (23-1) keep their quest to repeat as state champions alive.

Their next challenge comes Tuesday when they travel to Lansing Eastern High School to tangle with Lansing Everett, which defeated Kalamazoo Central on Wednesday.

Littlejohn, who finished with 15 points, smiled when asked how tired he was after playing in a thriller that covered 48 minutes.

“My legs were getting real tired,” he said. “We knew we had to keep fighting.

The Big Reds will get a few days to rest their legs before facing the next challenge. But whatever lies ahead will be pressed to match the incredible show of perseverance that both teams displayed on Wednesday.

The Big Reds withstood a talented Hudsonville (16-8) squad without star center Deyonta Davis, who picked up his fourth and fifth fouls with 5:14 left in the fourth quarter. He was whistled for a loose-ball foul, then a technical, after he slammed the ball to the ground in frustration.

“(The technical) was awful,” said Muskegon coach Keith Guy. “What else can I say?” 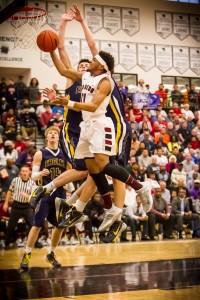 Jason Loera gets up and fights for two points for Muskegon. Photo/Tim Reilly

Davis, who posted a triple-double in Monday’s regional semifinals, finished with just four points. He also missed nearly the entire second quarter after he picked up his second foul.

But as Guy pointed out, his Big Reds “are not a one-man show.”

“We showed it tonight,” Guy said. “I was so proud of the effort of some of our guys off the bench. It was a total team effort.”

Muskegon survived due to a tremendous showing by senior guard Joeviair Kennedy, who paced the Big Reds with 27 points and 13 rebounds.

Hudsonville stayed alive at the end of the fourth quarter with two clutch 3-pointers by junior Bryce Elliot – including the tying triple that evened the contest at 47-47 and forced overtime.

Points were hard to come by in the first three extra periods, as Hudsonville played stall ball, turning every possession into a highly-valued commodity. The Eagles stalled the final 1:20 off the clock in the first overtime, only to come up empty on their final shot.

The second overtime was wild. The squads were scoreless for the opening 3:20, until Hudsonville picked up a Muskegon turnover and found a streaking Brent Hibbits open for a fast break layup and a 51-49 lead.

Muskegon responded by getting the ball to Kennedy, who drilled a long jumper to tie the contest again. The referees debated if the shot was a 3-pointer, but Kennedy’s foot appeared to be a step inside the line. 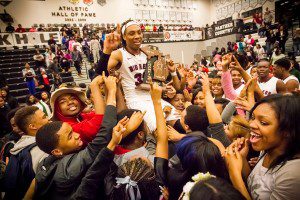 The Muskegon Big Red faithful hoist Joeviair Kennedy on their shoulders in celebration of their Regional Championship. Photo/Tim Reilly

The teams only managed one field goal apiece in the third OT, setting the stage for the Big Reds.

Littlejohn provided Muskegon with one more burst of energy, leading off the final overtime with eight points. The Big Reds went on to outscore Hudsonville 17-7 in the final overtime. Before that its largest lead was four points.

Hudsonville repeatedly misfired down the stretch, showing signs of exhaustion.

“We’re built for this,” Guy said. “This is why we put in all the work that we do in the offseason. I feel we could’ve played five or six more overtimes.”

“Honestly, it was kind of scary,” Littlejohn admitted of the back-and-forth showdown. “But we were able to dig deep.”

Junior guard Jared Blum led Hudsonville with 17 points, including eight-straight in the third quarter, helping the Eagles surge to their first lead.

The 6-foot-8 Hibbits, Hudsonville’s leading scorer this season, struggled with his outside shot, but still totaled 16 points. Physical forward Mason Opple, who drew Davis’ fourth foul while boxing him out, added 11 points for the Eagles.