FRUITPORT – It may have been the strangest quarter of high school basketball played in these parts in a long time.

And it worked out perfectly well for Muskegon Catholic. 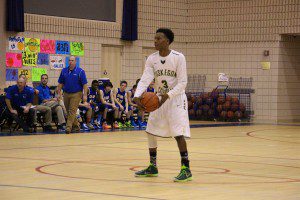 Calvary Christian scored a basket to start the third quarter, then MCC went into a prolonged stall, holding the ball almost the rest of the quarter, for about seven minutes.

Calvary outscored the Crusaders 2-0 in the quarter, but it made little difference as MCC rolled to a 42-17 victory and their fifth consecutive district title.

Muskegon Catholic will play Fulton Monday in the first round of regionals.

A lot of fans didn’t care for MCC’s stall tactic, and voiced their disapproval, but both coaches understood it. MCC was trying to draw Calvary out of its zone defense, but the Eagles wouldn’t budge, so there was a prolonged stalemate.

“We were up 13 but we had struggled a little bit with their zone defense,” said MCC Coach Lamar Jordan, whose team improved to 16-6. “In the third quarter we came out in our Carolina offense, which is kind of a stall and kind of isn’t, because we wanted them to guard us and play man-to-man. 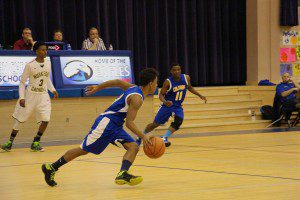 “They didn’t but it didn’t really bother us cause we were up by 13. The game didn’t change too much.”

Calvary Coach Matt Payton knew his team would have to eventually come out of the zone, but said he was hesitant to do so because of a lack of depth after two starters left with injuries.

“Ouy guys were kind of confused (by the stall) at first, but they did all right and didn’t get impatient,” said Payton, whose team finished the season 6-16. “I’m proud of the way our guys handled themselves. They played hard and didn’t quit.”

The game was competitive in the first quarter with MCC holding a 10-8 lead at the buzzer.

The Crusaders got rolling in the second quarter, outscoring the Eagles 16-5 to grab the 26-13 halftime lead. Christian Martinez led the uprising with eight points in the quarter, including two 3-pointers.

Calvary’s Isaac Burns scored the only bucket of the third quarter, leaving MCC up 26-15. 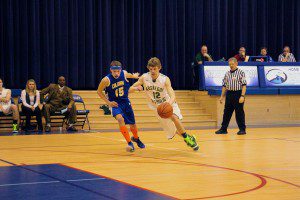 MCC’s Erik VanFossen got hot in the fourth quarter, netting eight of his game-high 14 points as the Crusaders sealed the district title.

Calvary was hurt by turnovers all night, due to MCC’s full-court press as well as a number of unforced errors. The Eagles ended up with 18 turnovers, one more than their point total.

Martinez finished with 12 points for MCC while Brendan Hamilton netted seven points for the Eagles.

While he was happy with the easy win, Jordan refused to make any postgame predictions about how far his team can advance.

“One of the things I’ve learned is the saying ‘win and survive,” Jordan said. “That’s all we want to do is survive and have an opportunity to compete another game. We’re going to face a good team on Monday.

“The team has been successful but we have to be grounded and take it one game, one possession at a time.”