EGELSTON TOWNSHIP – The Muskegon Mustangs won the Great Lakes Football League championship on Saturday with a 27-13 win over the Detroit Ravens at Oakridge High School.

The victory provided a measure of revenge for the Mustangs, who lost the league championship game last season.

“Three years in a row, we haven’t lost at home and I’m glad today wasn’t that day,” said Muskegon coach Brad Haney. “It’s been hard all season, but we told them to stay focused, don’t lose your composure and finish the game out.” 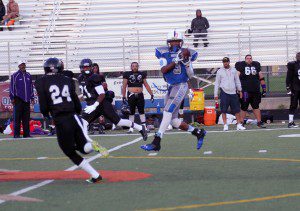 Jamarcus Martin pulls in the reception for Muskegon. Photo/Scott Stone

Muskegon fell behind 7-0 in the first quarter, then Demonte Collins put the Mustangs on the board early in the second quarter with a 30-yard touchdown reception from Aaron James.

“I’ve seen the play roll down and I’m taking Demonte Collins,” said Aaron James. who also is an assistant football coach at Mona Shores. “Once I sent him deep, I found him in the back of the end zone.”

With 4:44 left in the half, Aaron James broke into the end zone with a one-yard scamper and the blocked PAT put Muskegon up 13-7.

Detroit responded with 1:54 left in the contest with an eight-play scoring drive that was marred by Muskegon penalties.

Maurice Sherrill finally put the game in the bag for Muskegon with a 47-yard touchdown run which ignited the Mustang bench.

“Basically my offensive line did their job, they found their key blocks and my fullback definitely made a key block and it was all good teamwork,” said Sherrill. “This game meant everything. This was a chance to not only put on a show for my home town but to bring a championship home.” 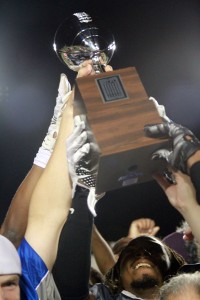 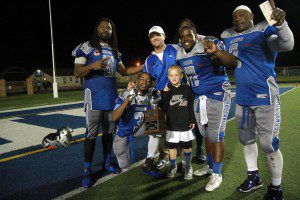 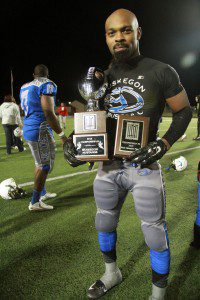 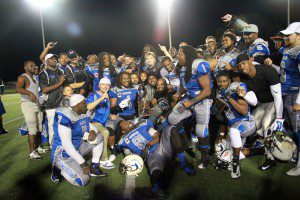