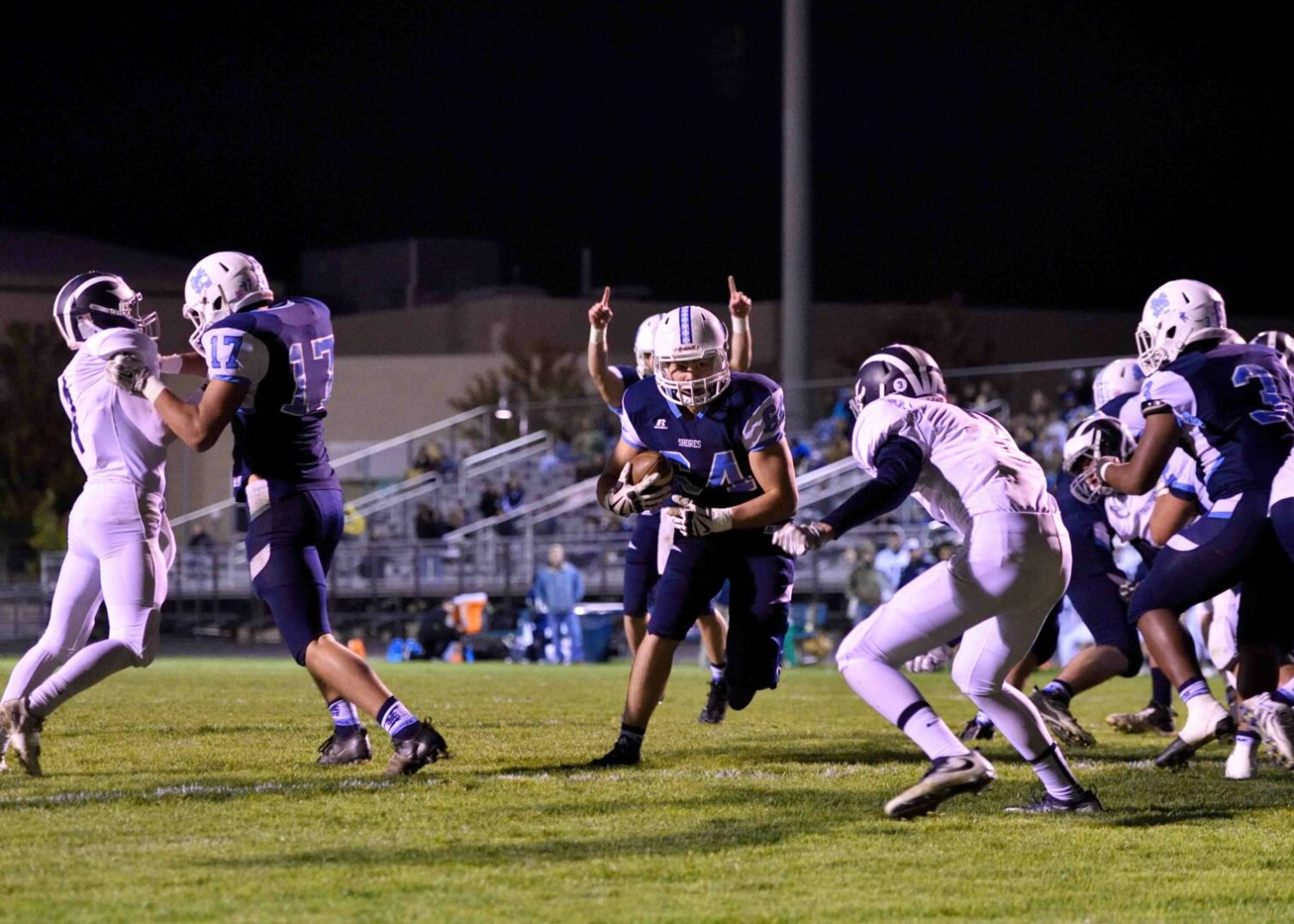 NORTON SHORES – It seems the Mona Shores football team has a glimmer of hope of extending its season.

The Sailors needed to win Friday’s regular season finale against Fruitport, and get some

help from other teams, to increase their playoff point total.

The Sailors did their part, dominating the Trojans from the first play of the game en route to a 41-14 victory and their fifth win of the season.

“I’ll watch film and the news and do the math and see what happens. I feel bad for our kids, but we kind of did that to ourselves. That’s what happens when you go 5-4 and leave it up to fate instead of getting that sixth (win) that guarantees getting in.” 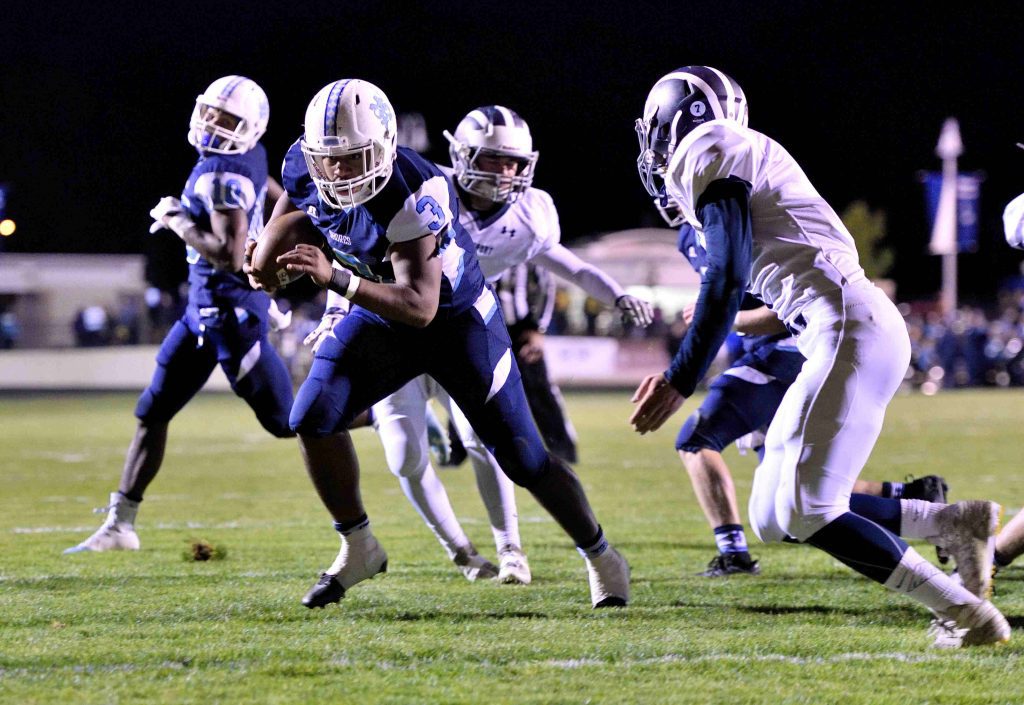 Mona Shores’ Marcus Collins (3) punches it in for a touchdown. (photo/Eric Sturr)

The first play from scrimmage saw Sailor quarterback Tristan Robbins launch a pass nearly 30 yards to Keyshawn Summerville, who rumbled the last 40yards to the end zone to put the Sailors up 7-0.

Fruitport senior Levi Six took over on the Trojans’ first possession, rushing four times for 71 yards – including a 10-yard scoring scamper – to tie the game at seven. Six provided the bulk of the Fruitport offense, finishing with 143 yards on 32 carries in his final varsity game.

The Sailors answered with touchdowns from Robbins and Marcus Collins to take a commanding 21-7 lead. Collins finished with 136 yards rushing on just 14 carries to lead all Sailor running backs.

On Fruitport’s first possession after the Collins score, Six fumbled the ball and Sailor defensive lineman Chuckie Anthony picked it up and rambled down to the Fruitport two-yard line. 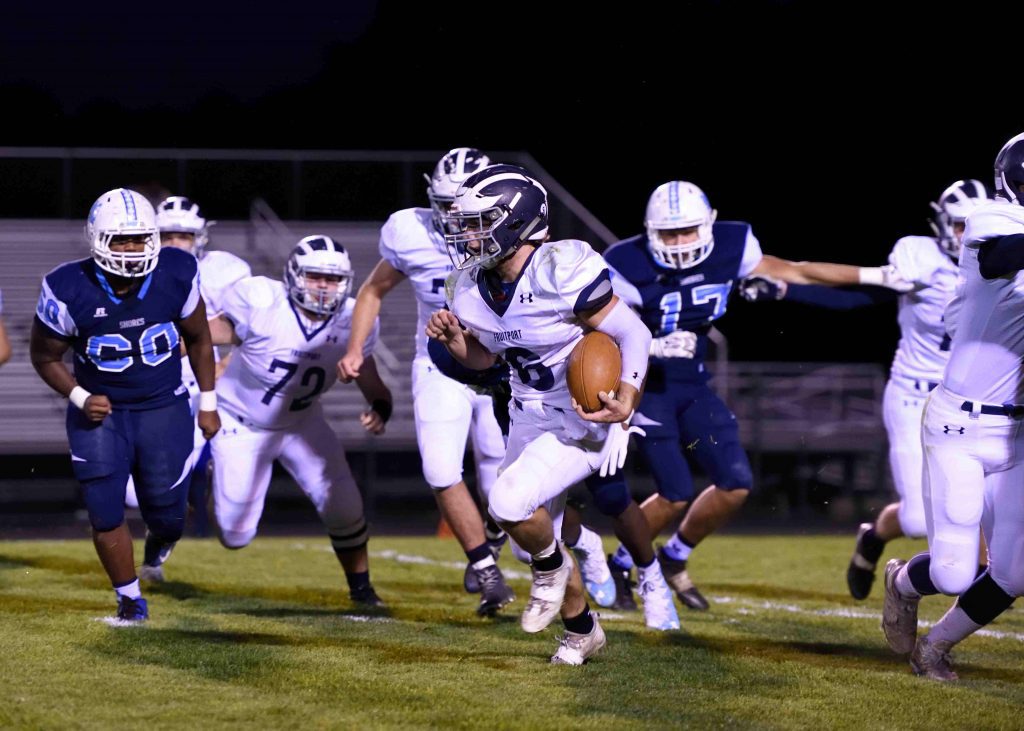 Being so close to the goal line, Koziak lined up senior Evan DeYoung in the backfield.

DeYoung, a lineman for his entire football life, tore his MCL earlier this season and missed significant time. But he got the handoff and scored the two-yard touchdown, giving Mona Shores a 28-7 lead after one quarter.

The second quarter was all Fruitport.

The Trojans held to ball for more than 10 minutes on a 21-play scoring drive that stretched 74 yards. Six finished the drive with a three-yard touchdown run around the left end to make the score 28-14 at halftime.

Anthony Davis broke loose for a 41-yard touchdown run with 41 seconds remaining in the third quarter to extend the Shores lead to 34-14.

The final scoring drive lasted just two plays. Robbins hit Emari Hardy over the middle for a 48-yard gain, then Collins hit paydirt with a seven-yard touchdown to put the Sailors up 41-14.

Though Koziak says he will know his team’s playoff fate by Saturday night, he may keep his players in the dark the build the suspense.

“We’re going to meet Sunday regardless, and maybe put them in suspense a little bit…we’ll see,” he said. 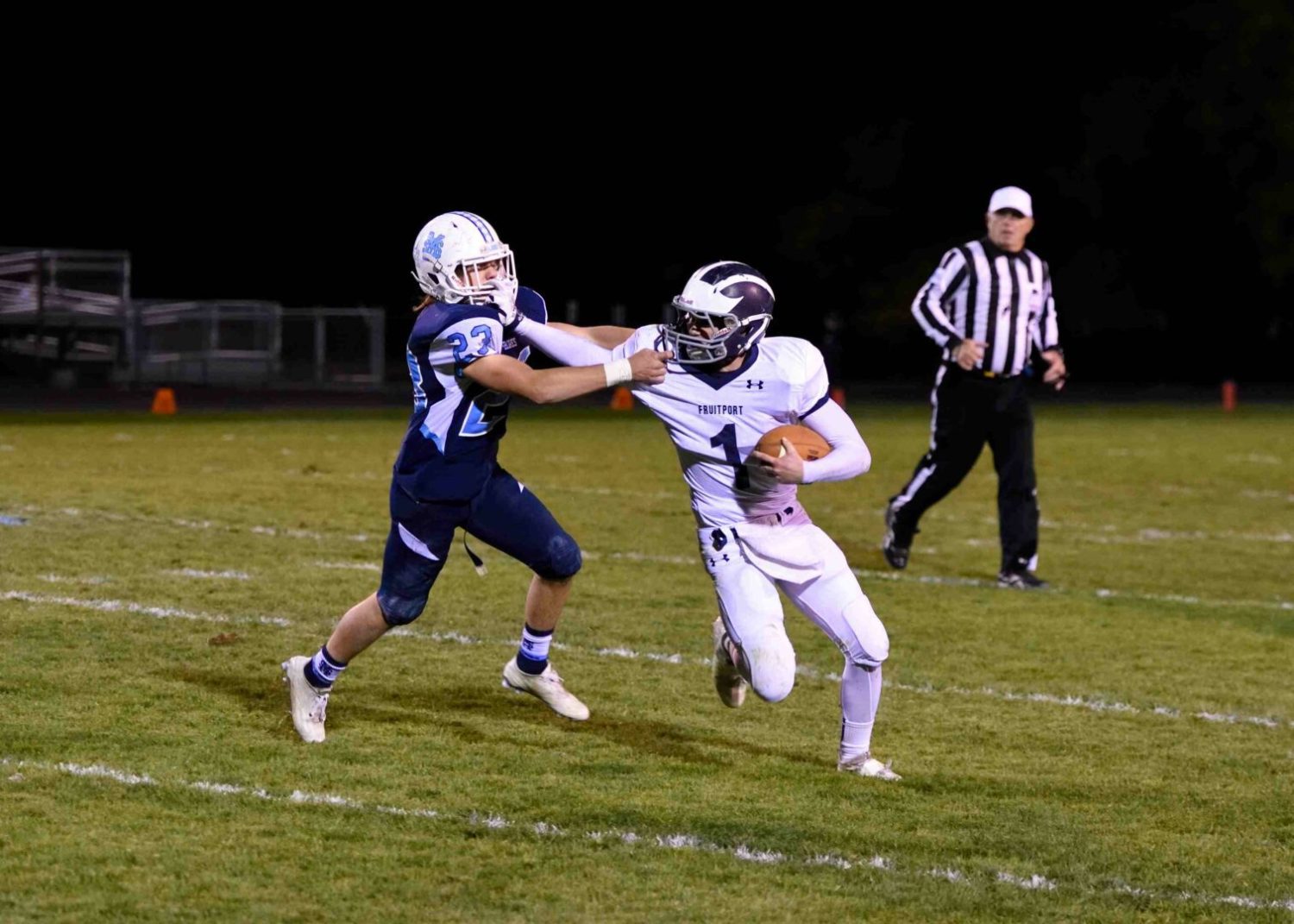 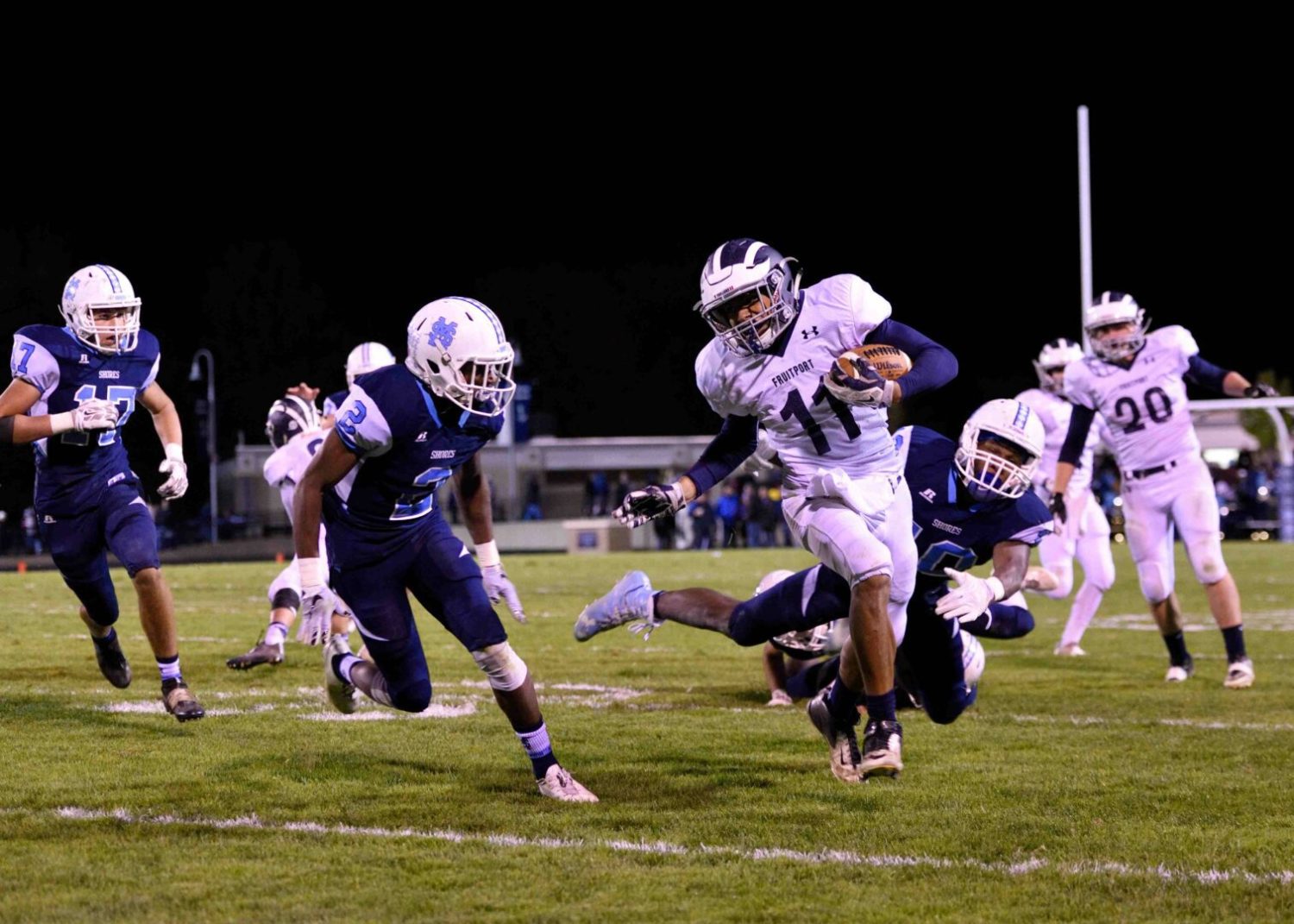 Fruitport’s Corey Oleen (11) turns the corner past Ke’Vonte’a Pegues (2) for a first down. (photo/Eric Sturr) 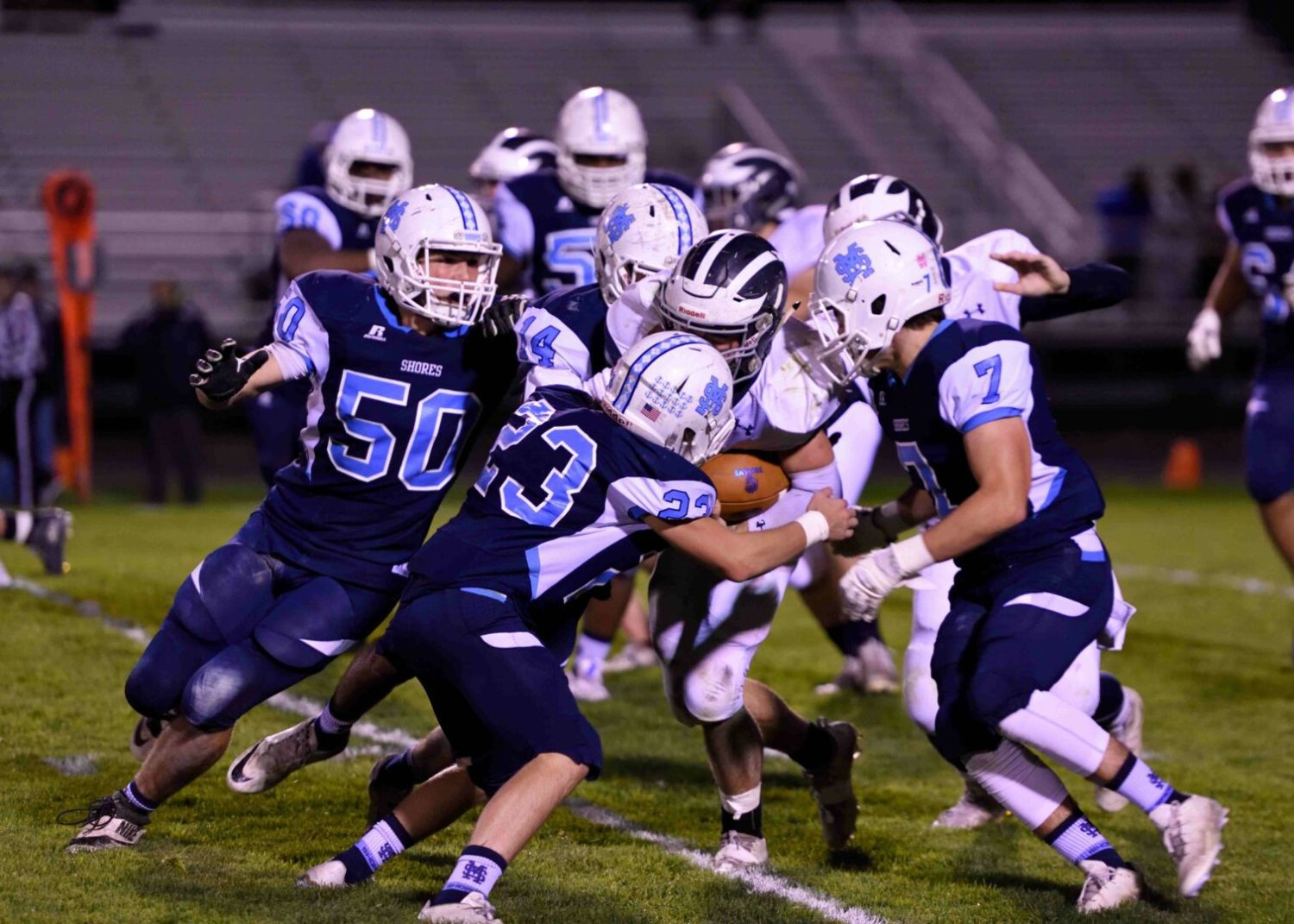 Mona Shores’ Evan DeYoung (64) scores through a big hole to put the Sailors up by 21 points. (photo/Eric Sturr) 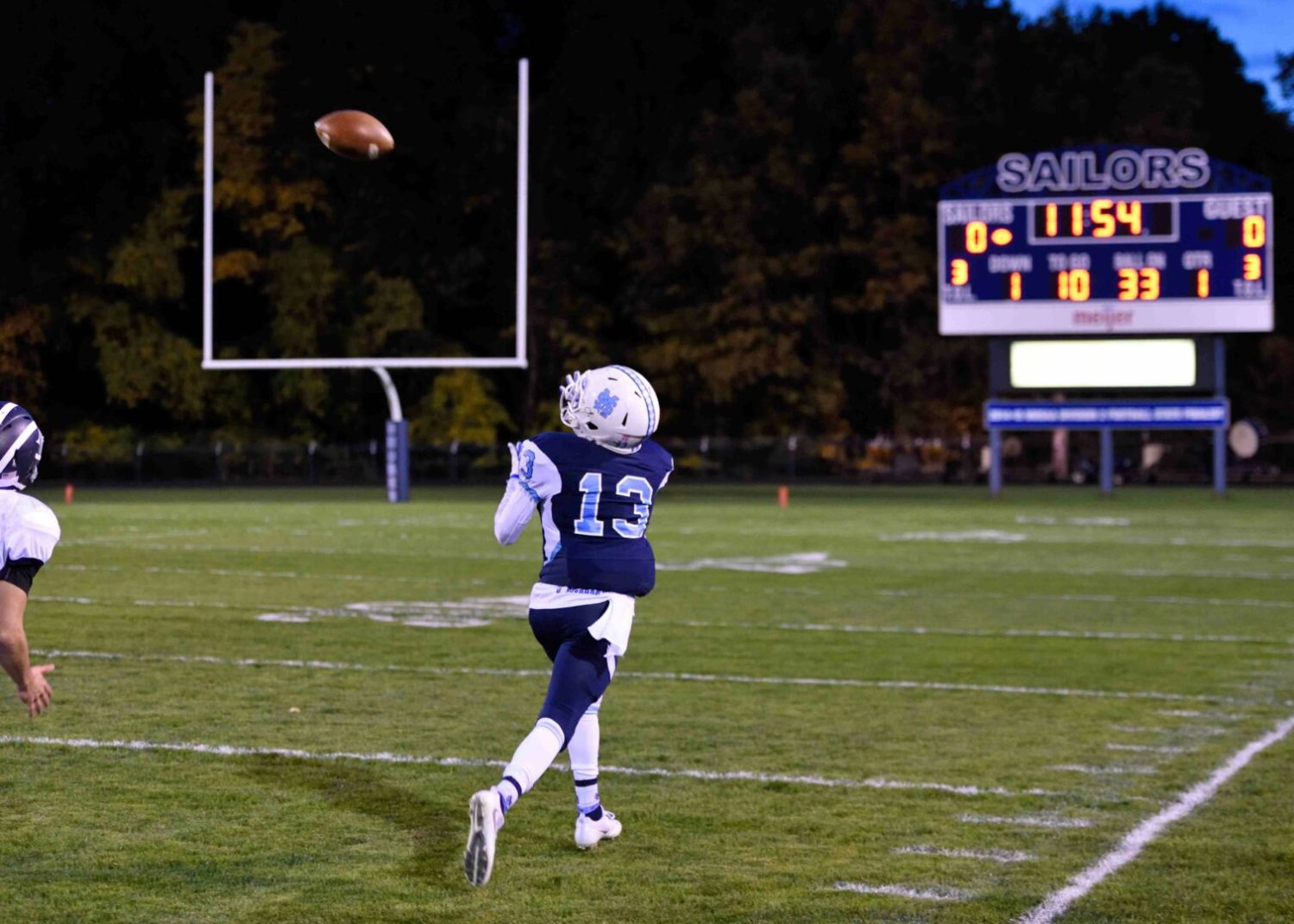 On the first play from scrimmage, Keyshawn Summerville (13) catches a 67 yard touchdown pass to put Mona Shores on the board. (photo/Eric Sturr)