WHITEHALL – The Fremont boys basketball team’s perfect start to the season is no more.

Host Whitehall went toe-to-toe with the previously unbeaten Packers in a non-conference showdown Tuesday, and earned an exciting 68-66 win. 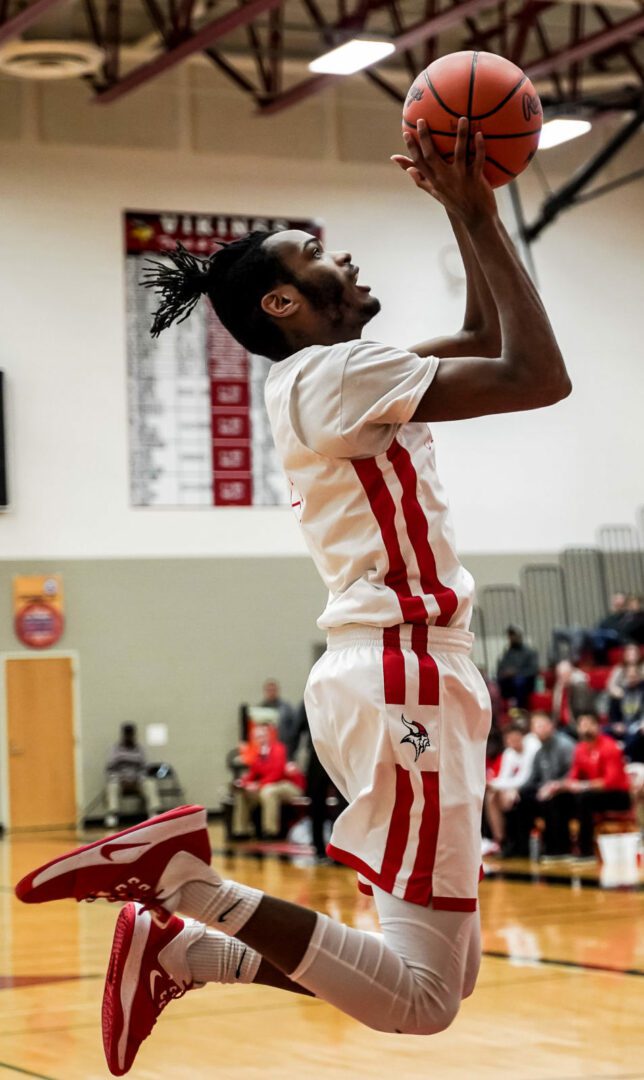 After dropping both of its games last week, this was a much needed win for Whitehall, which is now 4-6 on the season.

Fremont fell to 10-1 overall, but continues to lead the CSAA Gold Division with a 7-0 conference mark.

“We needed that,” said Whitehall Coach Nate Aardema. “It was one that could help us turn things around after we have been scuffling for a while.”

The game was tied at 46-46 after three quarters, then Whitehall built a 54-50 lead after Dayton Cole’s layup with five minutes remaining in the game.

But for every Vikings bucket, Fremont answered with Christian Kennedy and the long ball.

On three straight possessions, Kennedy hit 3-pointers to answer Whitehall, cutting the lead to 60-59 with 3:20 left.

Whitehall’s Red Watson was quickly fouled and missed his free throw, then grabbed the offensive rebound and was quickly tied up by a pair of Fremont defenders.

The possession arrow gave the Packers a final possession, but they turned it over without a shot and Whitehall added a free throw with less than a second left.

“Credit Fremont with hitting some crazy shots, they were never out of it,” Aardema said. “They’re having a heck of a year, and are a quality opponent, so this is a huge win for us.” 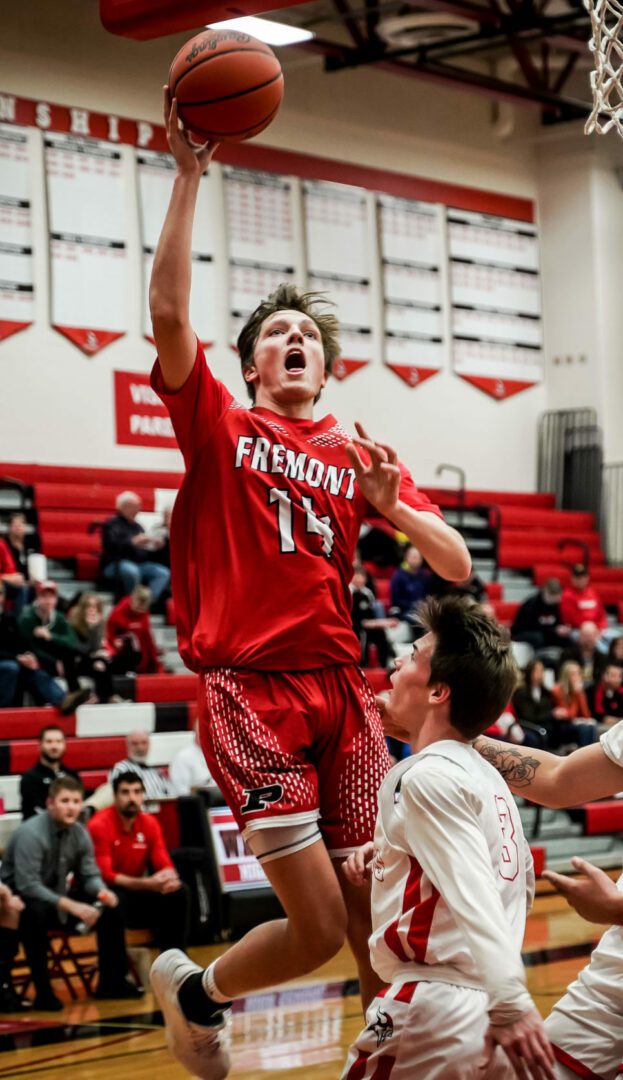 Whitehall handled the Packers’ full court press well all game, especially in the opening quarter, when the Vikings guards continually broke free for easy 2-on-1 opportunities.

That gave Cole plenty of easy buckets underneath, and he scored 10 of his game-high 25 points in the first quarter. But his team still trailed 15-12 at the end of one.

Three 3-pointers in the second from Moon gave Fremont the biggest lead of the game, 28-17, with 2:40 left in the first half.

But Whitehall continued to handle the press, and finished the second quarter on a 14-6 run to head to halftime only trailing 34-31. Watson scored 11 points for the Vikings in the quarter.

“There were two things that were keys to the game,” Packers coach Peter Zerfas said. “Don’t let them dribble through our traps and keep them out of the paint. So the top two things on our board that we were trying to accomplish, we didn’t do.”

A layup from Cole with 3:20 left in the third quarter gave Whitehall its first lead since early in the game, 39-37.

The Vikings held that lead until Kennedy hit his first 3-pointer of the game with 15 seconds left in the third quarter, tying the score at 46-46 heading to the decisive fourth.

“This is the tenth game of the season for us,” Aardema added. “So we can mark this game as the start of our second half of the year and go from there.” 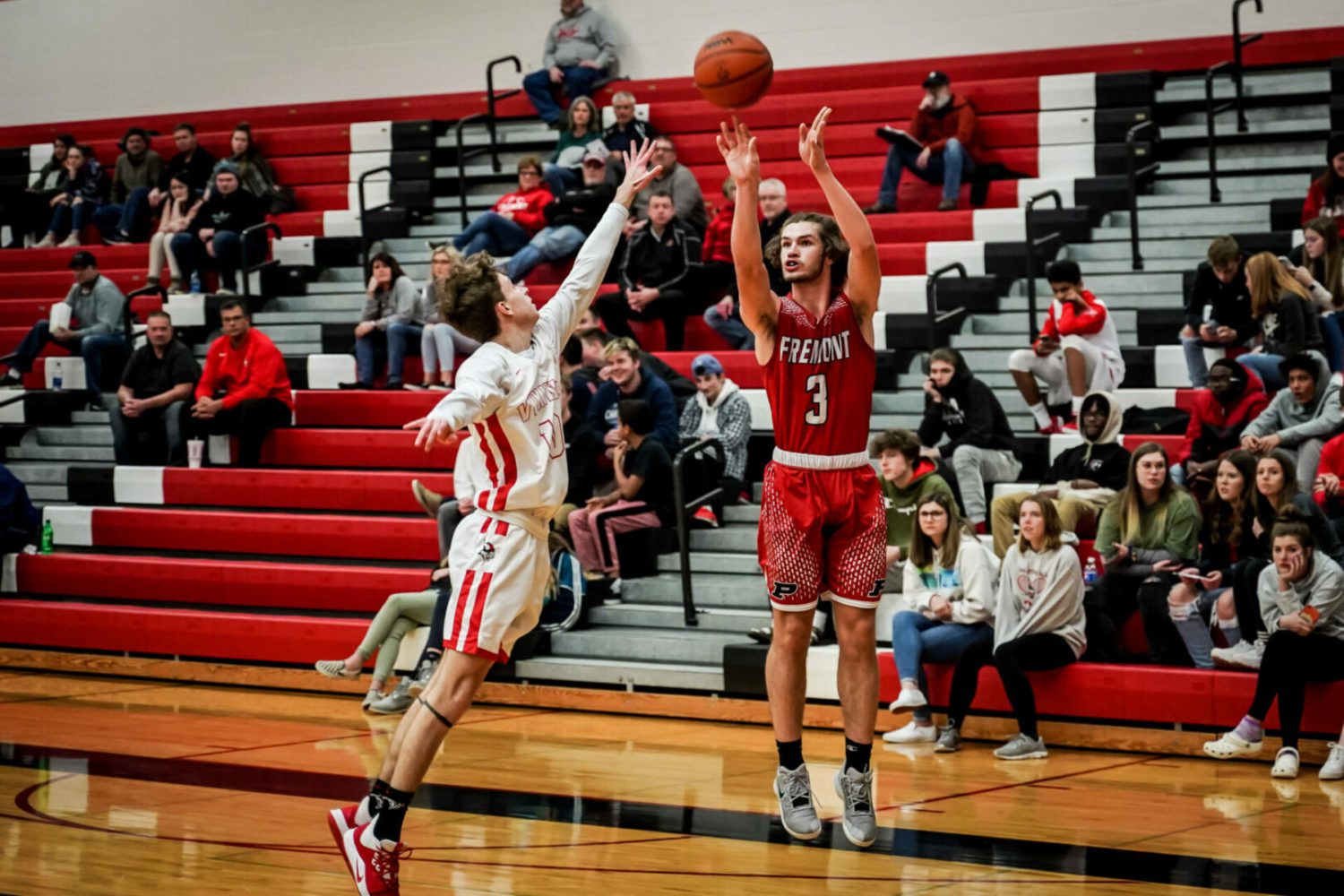 Fremont’s No. 3 Braiden McDonald takes a three-pointer as Addison Bluhm puts a hand up to block the shot. Photo/Kris Rake 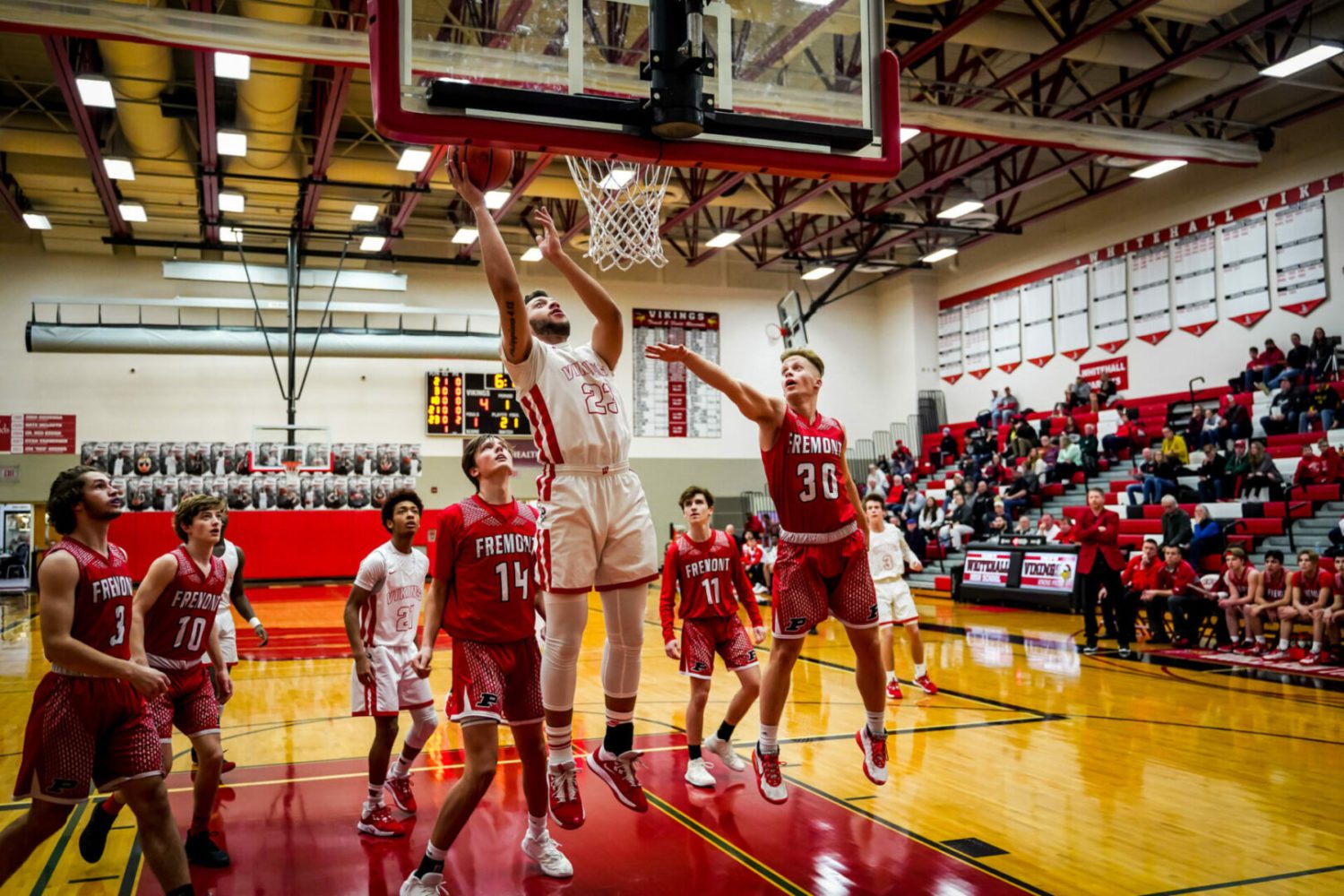 Dayton Cole goes up for a layup as Fremont’s No. 30 Carter Moon tries to block. Photo/Kris Rake 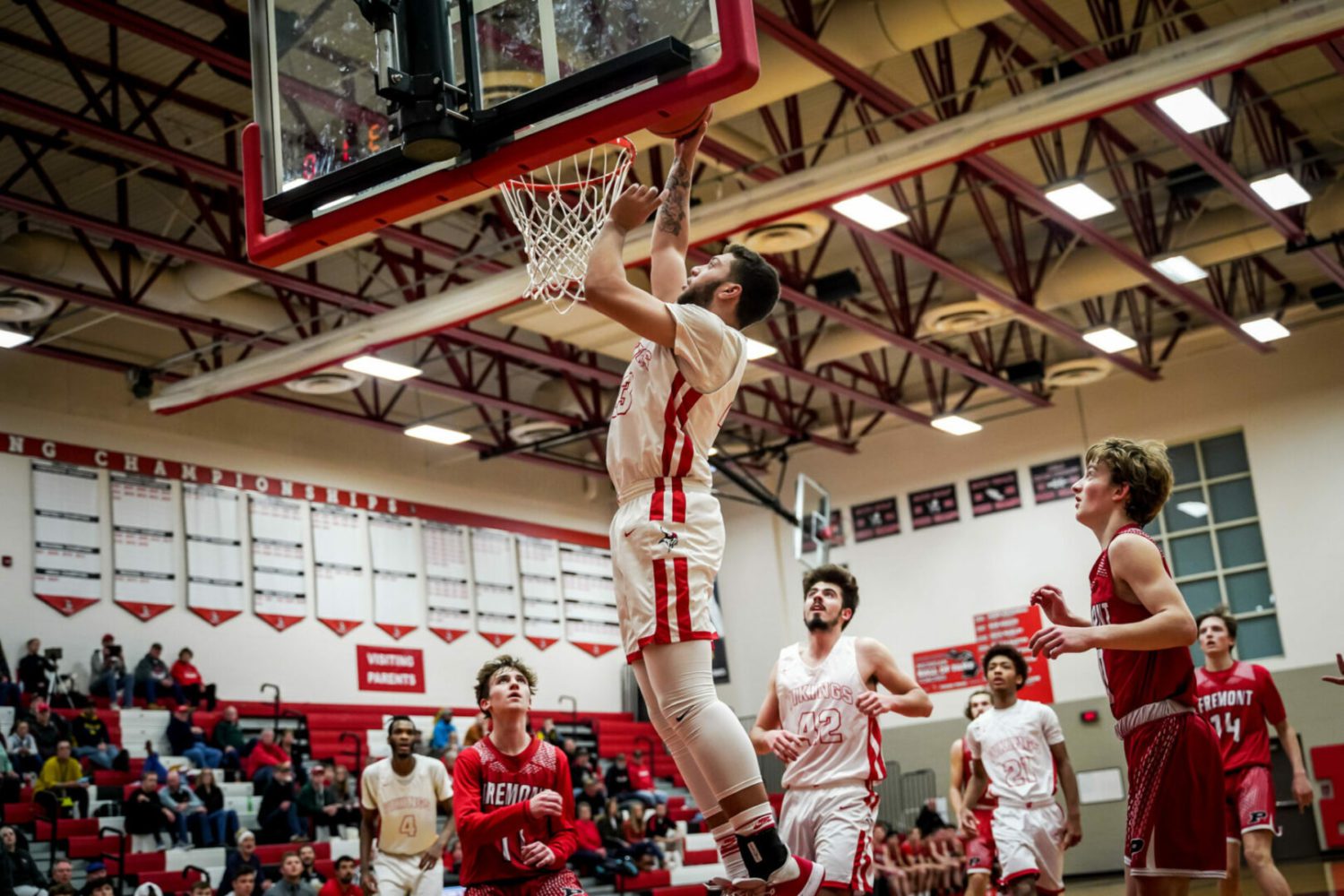 Dayton Cole goes up for two of his 25 points for Whitehall. Photo/Kris Rake 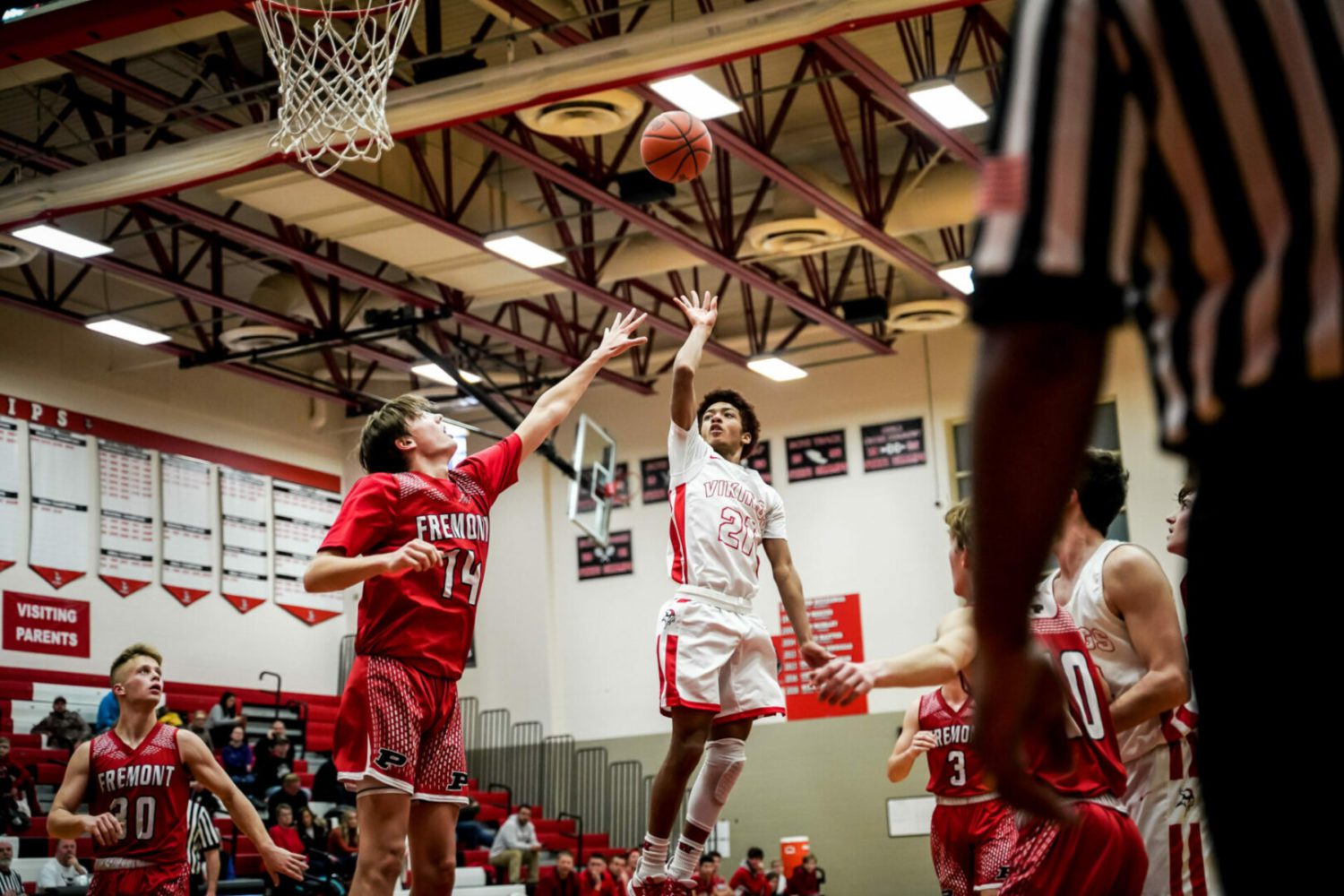 Red Watson floats in a shot over Fremont’s No. 14 Tristan Campbell. Photo/Kris Rake 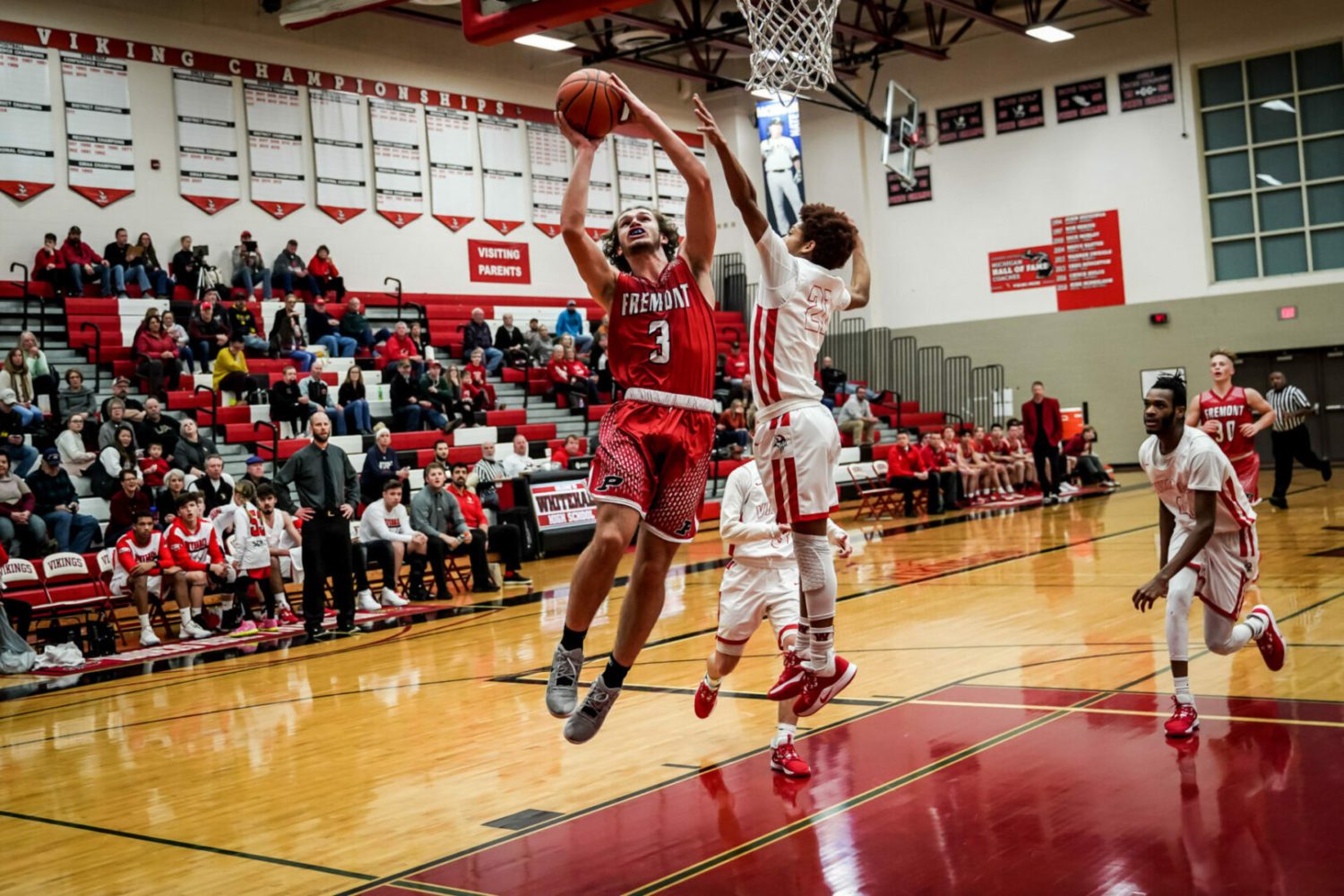