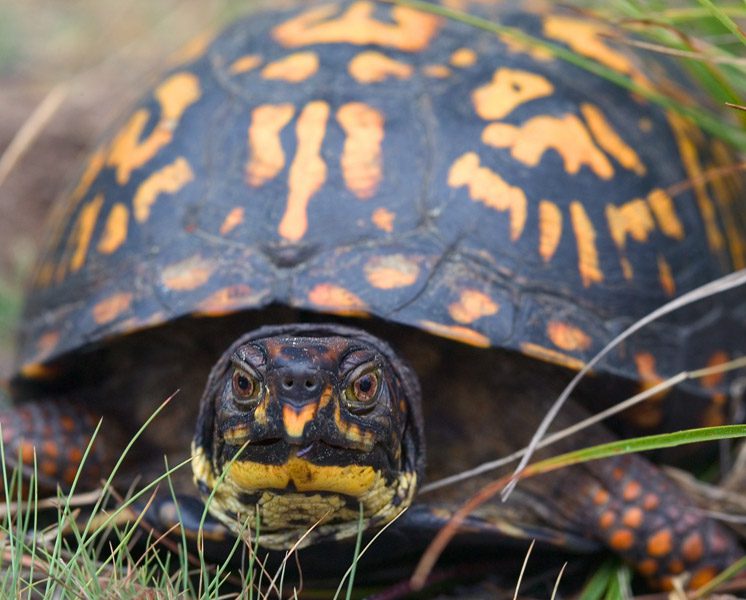 Humans have used dogs as helpers in innumerable pursuits for centuries, and that relationship seems to expand daily. John Rucker, a life-long bird hunting enthusiast, has always kept dogs to help him pursue upland game, but he’s also trained his Boykin spaniels to perform an unusual task. Rucker’s dogs have been trained to find and retrieve turtles.

The 65-year-old Tennessee resident was in Michigan recently to help members of the Department of Natural Resources’ Parks and Recreation Division find Eastern box turtles at Fort Custer State Recreation Area, near Battle Creek. The box turtles, a species of concern in Michigan, inhabit the woodlands and adjacent fields of Fort Custer. Parks and Recreation staffers are attempting to understand the turtles’ seasonal habitat usage to make sure ecological restoration efforts – prescribed burns, mowing and the use of herbicides – do not negatively impact the reptiles.

Alicia Selden, a DNR stewardship analyst, has been working on the turtle project for two years now. She says Rucker’s help has been invaluable.

“He finds as many turtles in a few days as it takes us a month to find,” Selden said.

Employing the services of an army of volunteers, many of them Michigan State University (MSU) fish and wildlife students, Selden and her helpers survey the agricultural field and prairies adjoining the woods on Fort Custer, finding turtles as they nest in the spring. The critters are typically homebodies, Selden said, but will travel a fair distance – maybe a half mile — from their woodland homes to find appropriate nesting habitat or a place to burrow and overwinter. What they’ve learned so far has already resulted in changes to their land-management practices, she said.

“We’ve pretty much put a hold on spring burns until we have a better understanding of the impact on box turtles,” Selden said “We’re shifting over to burns in the summer and fall.”

Rucker, who travels the country with his dogs to work on turtle conservation projects, said he “just sort of fell” into turtle-hunting more than a decade ago. He was walking with his dogs one day, found a turtle, and showed it to one of his dogs. A short time later, the dog came up to him with a turtle in its mouth. He’s been training his dogs to do the same since.

This spring, with Rucker’s assistance, the crew found close to 30 box turtles, often in the grass near the woods – where Michigan’s only terrestrial turtles spend most of their time – and the sandy agricultural and prairie grass fields. It was a pleasant surprise.

“Last year we found 13,” Selden said. “It really scared us. We had more than 600 hours of volunteer time on the ground for that. It scared us.”

Tracy Swem, a graduate student at MSU who will spend the summer monitoring the turtles, said making sure the park staff does not impact the turtle population with its land-use practices is important to protect the viability of the population as the Fort Custer crew works to restore the prairie habitat that once dominated the area.

“The reason this matters is they can enter into a slow extinction cycle if they lose just a tiny bit of the breeding population – about two percent,” she said. “They aren’t sexually mature until they’re about 10 years old, and you lose about 98 percent of the hatchlings.”

It takes several years for the turtles to form their hard protective shells. Until then, they are vulnerable to predation, particularly to raccoons, which also heavily predate nests by digging them up and eating the eggs.

Box turtles are unique among Michigan turtles. Though they are terrestrial, they are true turtles, not tortoises – they have claws on their feet – and they have a unique evolutionary trait, a hinged underside of the carapace, which allows them to fully retract and protect their head, tail and legs.

Some of the turtles the crew has found this year show damage on their shells from previous burns. Some biologists argue that these turtles have evolved with natural fires and can live with them, though others contend that natural fires do not occur as often as prescribed burns and repeated exposure to the fires over time could damage the population.

Some of the long-lived box turtles, which have been captured, have been fitted with radio transmitters – epoxied to their shells – so they can be located year-round. The knowledge gained about their habitat usage will help land managers better refine their management techniques. In addition, the turtles are marked with a series of notches filed into the outer edge of their shells, so researchers who find a turtle can compare locations to where it was last seen.

The shell-notching is a standard practice among turtle researchers. The crew at the recreation area found two turtles this year that had been marked by a Purdue University researcher in 2006 on the nearby military training grounds.

The Parks and Recreation crew made several important discoveries this year. They caught a 3-year-old – turtles can be aged by counting the rings on the plates on their shells, like growth rings on a tree – the first juvenile found in the two years of the project. Similarly, when a park staffer picked up a young turtle (7 years old) crossing the road the other day and brought it to Swem, she deemed it “an important find” because “we hadn’t found any between 4 and 10 years old.”

Parks and Recreation Division staffers and volunteers will continue to monitor the box turtles into the future. Ideally, the changes in land-management practices brought about by this research will ensure that they’ll be able find many more box turtles in the years ahead, while restoring southern Michigan’s prairie habitat.

Weekly DNR fishing report: Where are the fishing biting this weekend?

DNR’s deer check stations will be open until Friday 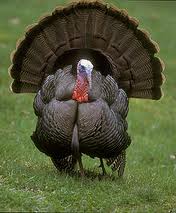