The recent death of “The Gator,” Detroit Tiger pinch hitter extraordinaire Gates Brown conjured up some great memories for this ‘ole announcer. 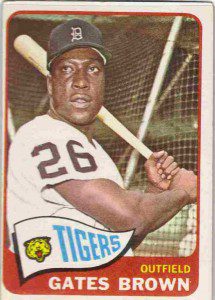 Brown passed away last week at the age of 74 and his funeral was held in the gymnasium at his old high school in Crestline, Ohio, where he was eulogized by many past notable Tiger teammates, and close friends.

Included among those remembering their departed friend was his high school quarterback, whose last name may ring a bell to many of you – Harbaugh.

Jack Harbaugh, who had a couple of sons who roamed the sidelines in an incomprehensible moment as the head coaches in last year’s Super Bowl, was the quarterback of Brown’s high school football team.

The solemn crowd did enjoy a touch of levity during Harbaugh’s moving tribute to his star high school running back that erupted in laughter when Harbaugh recounted one scoring sequence from high school.

He got quite animated describing the 16-play drive.  “All but the last play were either handoffs to Gates or passes to Gates, which got us to the cusp of the goal line,” recalled Harbaugh.

“Gator,” Harbaugh said in the huddle, “I think you’re tired.  I can take it from here.”

Harbaugh called his own number at the 1: Quarter back sneak.  Touchdown. “He was such a kind, loving guy,” Harbaugh said, “He could laugh about it.”

Living virtually my entire lifetime a couple of hundred miles or more away from Detroit prevented me from attending as many Tiger baseball games over the years as I would have liked, but there was one date that will remain with me forever.

It was a day like none other that Gates Brown would experience in his 13 year MLB career, all spent as a Detroit Tiger.

The date was August 11, 1968, and at the time, I was living in Traverse City, where I had just completed my first year broadcasting high school sports for radio station WTCM.

How we acquired tickets for this game has long been forgotten over the ensuing 45 years since the Tigers faced the defending American League champion Boston Red Sox in the doubleheader.

Nor could I have ever comprehend what the future held for my three travel companions from that day.

Making the long trek from Traverse City with me were Frank Majerle, Tom Kozelko, and John Naymick.

Who could have grasped at that time that a pair of Frank Majerle’s little 3- and 4-year old gym rat sons would become basketball icons.  “Little” Dan Majerle would be a three-time NBA All star while big brother Steve would lead Rockford to a high school Class A state championship as their head coach in 2003.

Kozelko and Naymick had just completed their high school basketball season for one of the top Trojan teams in school history.  Kozelko would be the Mid American Player of the Year in both his junior and senior seasons at Toledo before playing 3 years in the NBA.

The 6-foot-8, burly Naymick, whose father Mike Naymick pitched for the Cleveland Indians in the late 1930s and early 1940s, was an outstanding three-sport star at Traverse City. Many years later, John would enjoy watching his nephew, Drew Naymick, help lead Michigan State to the Final Four as the Spartans all-time leading shot blocker.

Coincidentally, Naymick and Kozelko’s high school coach in 1968 was Wayne Hintz.  Hintz had taken the coaching position at Traverse City after serving as the head coach at Alma College, where one of his star players was the hitting hero of the 1968 World Series, Jim Northrup.

After departing Traverse City near the break of dawn for the Motor City, hours later we finally settled into our seats, located about a half dozen rows up in the second deck along the first baseline. We had excellent seats at the historic ballpark on the corner of Michigan and Trumbull.

The day did not get off to a promising start for our beloved Tigers as the BoSox pummeled Tiger starter Earl Wilson for four first-inning runs, knocking Wilson out of the box after facing but six Sox batsmen.

After Dalton Jones hit the second home run of the inning off Wilson, Tiger skipper Mayo Smith replaced Wilson with one time Ohio State quarterback Joe Sparma.  Fortunately, the Tiger bullpen completely shut down the Boston hitters over the next 13 innings.

Appropriately, the pitcher who replaced Sparma was Jon Warden, one of the former Tigers who gave a eulogy of Gator at last week’s funeral.

Fred Lasher and Don McMahon followed Warden to the mound before giving way to a Tiger pitcher who will be forever remembered by Tiger fans as the hero of the 1968 World Series Championship team.

Can you imagine any of today’s managers bringing in one of their starting rotation pitchers in the midst of a ball game to pitch not just one inning, but five innings in a regular-season game?

Calling upon Mickey Lolich would be comparable to Jim Leyland inserting Max Scherzer or Justin Verlander.  It would never happen today.

The Tigers had a less than comfortable 5 1/2  game cushion over their closest challengers for the American League lead, in the last year before playoffs were added at the close of a regular season.

The Tigers kept chipping away at the Boston four-run lead with single runs in four separate innings to eventually even the game at four runs apiece.

With the game headed for extra innings, Smith called upon his portly lefthander Lolich to keep the hard-hitting BoSox at bay, exactly what the future donut impresario did, pitching five shutout innings as the game was extended into the 14th inning.

In the Tiger bottom half of the 14th the first two Tigers were retired by Red Sox relief pitcher Lee Stange.  I quickly bolted from my seat, headed for the nearest restroom when I was quickly stopped in my tracks when I heard the PA announcer announce:  “Now batting for Lolich, Gates Brown.”

I wasn’t the only one who stopped their movements toward the nearest restroom or concession stand when Brown’s number was called, as Brown had a penchant for the dramatics throughout this magical season.

Sure enough, the Gator delivered.  I can still vividly picture his line drive that was headed towards the right field line.  Would the drive stay fair, and if fair did it have enough height to clear the right field fence?

The answer was yes to both of those queries and the Tiger faithful of nearly 50,000 fans went berserk as the Gator had a game-winning home run (No one called them “walk off” home runs in this era) and Mickey Lolich picked up a well-deserved victory.

There was still another game to play in this wonderful period of baseball when a Sunday doubleheader was standard fair.  No way could the nightcap of this doubleheader top the dramatics from Game One – But it did!

Gary Bell got the start for Boston in the nightcap while Mayo Smith gave the start to a guy best remembered in Tiger lore as an ace relief pitcher, John Hiller.

The two starters dueled for six scoreless innings before Boston outfielder Reggie Smith broke up the shutout with a two-run home run in the top of the seventh.

The Tigers rallied in the bottom of the eighth inning to tie the game on a two-run single off the bat of “Stormin’ Norman” Cash, driving in Mickey Stanley and Gates Brown, who was rewarded for his first-game heroics with a rare start in left field. That gavemWillie Horton a well deserved break.

Our sense of euphoria for yet another Tiger thrilling victory quickly took a nosedive as that man Reggie Smith belted his second home run of the game to drive Tiger reliever John Wyatt from the game and Mayo called upon Jon Warden.

But before the smoke had cleared Boston had plated a couple of insurance runs to give the visitors a seemingly safe 5-2 lead heading into the Tigers last bat.

I can yet remember our conversation the four of us had as the Tigers came to bat in the ninth inning.  We all were satisfied that we had already witnessed one Tiger victory that day as well as that eighth inning comeback that tied the score just minutes earlier.

Current Tiger radio broadcaster Jim Price started the inning off by drawing a walk.  Things looked bleak for the Bengals when Wayne Comer, who had homered in the first game and was pinch hitting for the Tiger’s weak hitting shortstop Ray Oyler, flied out for the first out.

Smith called upon yet another pinch hitter when the regular Tiger catcher Bill Freehan hit for Warden.  Freehan came through with a base hit and Boston’s Hall of Fame manager Dick Williams replaced his starter Bell with Bill Landis.

When Dick McAuliffe greeted Landis with a solid single to right to drive in Price, and move Freehan up to second, Tiger Stadium was now a madhouse.

Stanley made venerable Tiger Stadium rock even further with a base hit to center to drive in Freehan and send McAuliffe racing all the way to third.

With the tying run at third, Hall of Fame outfielder Al Kaline came though with a single to right to drive in McAuliffe and the Tigers had come all the way back from the brink of defeat to tie up the game at five runs apiece.

And then up to the plate strode ‘The Gator.”  Williams called for the bullpen yet again to summon eccentric left-hander pitcher Sparky Lyle to pitch to Brown.

With the winning run at third one has to wonder why Williams even elected to pitch to Brown, but waiting on deck was Cash, swinging a hot bat with three hits already to his credit during the game.

Sure enough, Brown came through once again with what has to be a rarity in baseball terminology today, two “walk off” base hits on the same day!

And John Warden, who was a speaker at Gates funeral along with Brown’s lifelong friend Willie Horton, picked up the win in his now departed friend’s best day ever in his major league career.

Many Tiger baseball pundits noted the doubleheader sweep as the turning point in the pennant-winning season for the Tigers.  Detroit gained  1 1/2 games on their closest pursuers, the Baltimore Orioles, and all but crushed any Boston hopes for an AL repeat as they fell a hopeless 12 games behind our beloved Bengals.

I like to pride myself as being a somewhat reserved spectator over the years in watching athletic events.  But that was certainly not the case on August 11, 1968.

It took me nearly a full week to regain my voice as my loud cheering on this date gave me the most serious case of laryngitis in my lifetime.

And it was “The Gator” who did it!

Thanks for another everlasting Moyes Memory, Gates.