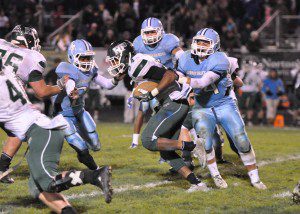 And while it didn’t rain Friday night, the grass was wet and the field churned up and muddy, compromising footing and taking enough of the edge off the high-powered Mona Shores offense for the Rockets to earn the tough 32-28 victory on the Sailors’ home turf.

The win, the biggest in years for Rockets, ups Reeths-Puffer’s record to 7-1 overall and 4-0 in the OK Black Conference, setting up next week’s season finale versus likewise 7-1, 4-0 Muskegon for the outright league title.

“It was crazy, it was up and down,” said a jubilant Garrett Blanshine, Rocket senior quarterback. “It was like a rollercoaster. But I think it was that we were able to stay cool most of the game, and that, I think, had a lot to do with us coming out on top.”

Read more of Blanshine’s thoughts about his team’s incredible run by clicking here.

“I can’t say enough about (how we) responded to…their big-play offense,” said Jewett. “That can take the wind out of you quickly. For us to face that adversity and come back. It says a lot about our character.”

Mona Shores, which slips to 6-2 overall and 2-2 in the league, travels to Grand Rapids Union next week  looking to end the regular season on a high note.

“Our kids played hard,” said Mona Shores head coach Matt Koziak, “but we had too many penalties and it was almost like we weren’t in sync. Obviously it had something to do with their defense; they were well prepared. The effort was there. We just had too many mistakes to beat a good team like that.”

The first half was a track meet.

Shores scored first, dinking and dunking down the field on its first possession, and then capping the eight-play drive with a two-yard TD run by Asontay Brown. The Rockets, however, used a defensive alignment that forced all the play to happen in front of their safeties, who were positioned 20 yards off the ball. It was the hope of the Rockets’ staff the alignment would slow down the potent Sailor throwing attack, and indeed it did, eventually. 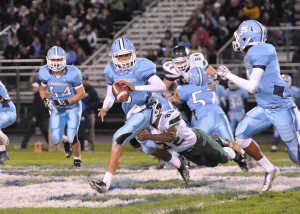 Mona Shores junior Tyree Jackson pitches at the last second as he is being tackled by Reeths-Puffer’s Evan McCrary. Photo/Eric Sturr

The Rockets benefited from a fumble recovery on the Sailors ensuing drive, turning it into six points as 21 took it 63 yards on the Rockets’ first play of the possession, and then capped with a one-yard Corey Plichta TD run to put Puffer up 12-7.

After trading punts, the Rockets made it 19-7 when Plichta ran it in from two yards out, keyed by a 58-yard slant pass to DeAndre Oakes-Owens, who took it down to the Sailor five.

Shores cut the Rocket lead to six with an 83 yard, 12-play drive that highlighted all of the ways Mona Shores can beat you. Brown, Marquan Sargent and Hunter Boersma each contributed to the score, with Brown finishing things off with a four-yard pass from Tyree Jackson.

But the Rockets punched right back, putting together a 14-play drive that featured just three passes.

Unfortunately for the Sailors, one of those passes, coming on a fourth-and-one on Mona Shores’ 26, was a perfectly executed play-action where Blanshine connected with tight end Evan McCrary for the score, making it 25-13. 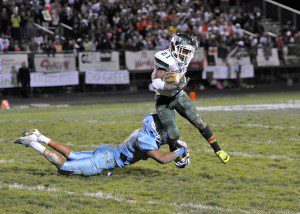 The Rockets dominated most of the third quarter with a six-minute drive that covered 57 yards, and looked like they might just seal the deal with a first-and-goal on the Sailor five. Hoping again to fool the Sailor defense, which routinely had all 11 of its defenders within five yards of the line of scrimmage, Jewett dialed up another play-action pass, to disastrous results when Blanshine’s pass was picked off by Sargent.

“I thought that was huge,” said Koziak. “They drive and drive and it looks they’re going to score. They call a pass play, and we get the interception. At the time, it seemed like the momentum had shifted toward our side.”

Back the other way the Sailors went, but were forced to punt, pinning the Rockets in their own territory. Eventually, the Rockets had to punt as well, but Brown returned it to the Rocket 33, where – following a 23-yard slant pass to Brown and then a lengthy injury delay where the Rockets’ Trevor Mosher had to be carted away by ambulance to a local hospital in what looked to be a back injury – Jackson took the keeper up the middle and ran untouched for the score to make it 25-20. 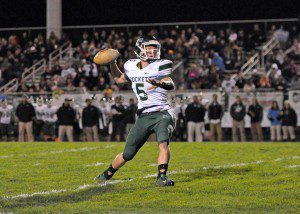 After another Rocket punt, the Sailors appeared to be in the driver’s seat, needing just two plays to score after a 68-yard TD pass from Jackson to Brown, who shook a Rocket defensive back and ran it in for the score to give his team, after Jackson connected with Brown again on the two-point conversion try, the 28-25 lead.

Like it had all night, Reeths-Puffer answered on what would prove to be the winning possession, driving 63-yards in 10 plays, where Plichta scored from four yards out for his third TD of the night.

The Sailors had two chances to drive to the winning score, the first ending on a fourth-and-25 punt, the second ending with a Jackson interception by Puffer’s Chase Smith.

After what seemed like a bout between to boxing heavyweights, Jewett was impressed with the way his team fought back.

“Honestly,” said Jewett, “(his team) is self-driven. They want this. They understand the gravity of it. When you got players like that who can be self-coached and lead from the middle, you really got something.” 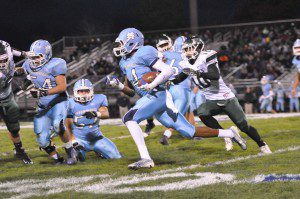 With the Big Reds on the horizon, the Rockets are elated to be in the position to beat one of the state’s best teams and win an outright conference title.

“It’s exciting,” said Blanshine. “If you want to be the best, you have to beat the best. We all are aware that the game is for the conference title. And that’s about all you can ask for heading into Week 9.”

Munday led all rushers with 186 yards on 28 carries, while teammate Dereko Riley didn’t have too bad an effort himself, finishing with 125 yards on 20 carries. Plichta, recently returning from a knee injury finished with 64 yards on 10 carries, and Blanshine added 31 yards on six carries. Blanshine finished with four-for-eight passing for 102 yards, one TD pass and two picks.

Oaks-Owen led the Rockets with three catches for 76 yards.

Defensively, Riley finished with a game-high 12 tackles, with teammates Austin Malotke and DeAngelo Williams adding eight and six stops, respectively, for the Rockets.