It could be a very good sign for the Mona Shores baseball team, heading into Saturday’s Division 1 district tournament:

That’s right – 23 home runs. All of the other players who participated combined for 11. The fences were shortened with the players hitting from the pitchers mound. 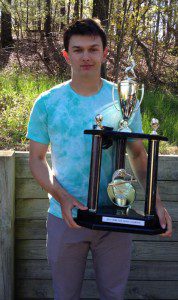 Tyler Trovinger stands with the Home Run Derby trophy coach Lent rehabbed from the trophy case for the event.

“Once I started cranking, it was just natural,” said Trovinger about his derby performance. “It was back-to-back-to-back, I was just feeling it. Every home run I hit, I was just grinning ear to ear because my swing just felt so perfect that day.”

The derby was a fundraiser for the Mona Shores baseball program, with varsity, junior varsity and freshmen players competing.

For $10, sponsors could have their name put on a baseball. All of the balls that were hit for home runs during the derby were put in a bin for a drawing, with several picked as raffle winners.

Players in the home run derby received one “out” for every $10 they raised. Trovinger sold $150 worth of sponsorships, so he had 15 outs in the derby. An out is any hit ball that is not a home run.

But Trovinger didn’t need very many outs, because most of his swings sent the balls over the fence.

“It was amazing how effortless his swings were,” said first year Mona Shores head coach Bill Lent. “It was just one right after the other. He’d just square up and go. After a while, I lost track. We had to count how many balls were in the bucket.”

Actually Trovinger’s performance was not that surprising, considering how he’s been hitting in real games.

After going hitless in the first five games of the cold and short season, he’s raised his average to a sparkling .360 with 24 RBI and three home runs.

Those are very good numbers for any high school player, particularly an underclassman. 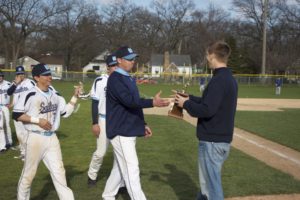 Trovinger has also contributed with sharp defense at shortstop, and has pitched two games, with his fastball clocking in the mid-80s.

“He has a very good arm and has made some incredible plays at short this season,” said Lent about Trovinger’s shortstop abilities. “He has a lot of work to do  to be the shortstop he can be, but he is well on his way to being one of the top players in the area, if not the state.”

Trovinger’s play has earned him a spot on the O-K Black All-Conference team in each of his two varsity seasons.

He is clearly benefitting from four years with the West Michigan Riptide, an elite junior traveling team. He’s also participated in many summer baseball camps, including one at the reputable Under Armour Baseball Factory in Florida.

“Every coach that we’ve played against, they all say he has all the tools for the next level,” said Lent. “I can’t hear enough from coaches who play against him. It will be fun to have him for a couple more years, too.”

Their first game will be a continuation of their heated rivalry with league rival Reeths-Puffer. The two teams have split four games this year, but the Rockets will be out for revenge after losing a one-run extra inning game to Mona Shores in the Greater Muskegon City Tournament championship game.

The winner will advance to the title game later in the day against the winner of the Kenowa Hills-Grand Haven semifinal.