MUSKEGON – Tom Marchin and Matej Paulovic have been producing a lot of goals for the Muskegon Lumberjacks lately.

But they can’t score goals when they aren’t on the ice. 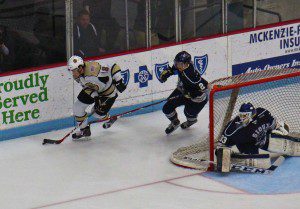 Marchin received a 10-minute misconduct penalty in the first period Saturday following a fight with a Sioux Falls player. The same thing happened to Paulovic in both the second and third periods, for a variety of misdeeds.

With those two big guns missing from their lineup for a big part of the contest, the Lumberjacks saw their four-game winning streak come to an end in a 7-3 loss  to Sioux Falls in front of 1,793 fans at L.C. Walker Arena.

Both Friday and Saturday’s games with Sioux Falls were filled with fights, shoving matches, hard hits and lots of penalties.

The two teams combined for 71 penalty minutes on Friday and 74 on Saturday.

Those sort of games aren’t necessarily ideal for the Lumberjacks, who have a lot of skilled players who are more suited to scoring than the rough stuff. 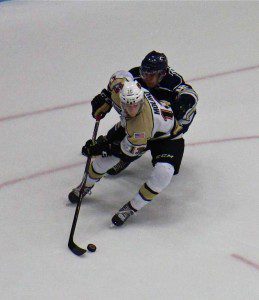 “Losing Paulovic for 16 minutes, and then losing Marchin for 15 minutes, and you’re already missing (Christian Wolanin, who’s out of town in a tournament) … you know, it was kind of just one of those nights,” said Muskegon Coach Todd Krygier.

“I thought we gave them room right off the first shift. We didn’t work as hard as we needed to.”

Penalty-filled games are also a problem when you can’t kill power plays. After holding Sioux Falls scoreless on five power plays Fridays, the Lumberjacks gave up goals on all three short-handed situations Saturday.

Krygier admitted he used some more offensive-type players on the penalty killing unit, in an effort to gain a much-needed goal, and it backfired at few times.

The game got off to a rough start when Sioux Fall’s Logon O’Connor scored just 48 seconds into the first period.

Muskegon’s Jack Rowe tied the game at 1-1 at the 4:56 mark, after taking a nice centering pass from Paulovic. Both Paulovic and Griffen Molino were credited with assists. 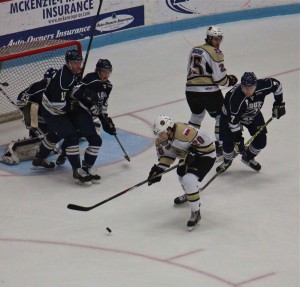 Trevor Hamilton pulled Muskegon within one when he scored on the power play at the 16:46 mark with a slap shot from the blue line.

The second period started as badly as the first, when Daniel Warpecha scored for Sioux Falls at the 57 second mark. Sioux Falls led 4-2 after two periods.

The Stampede expanded its lead to 6-2 in the first half of the third period with two power play goals, from O’Connor and Clint Lewis.

Hamilton scored his second goal for Muskegon with about five minutes left in the game to make the score 6-3, but Sioux Falls finished off the Jacks at 18:52 with an open net goal by Loggins.

For Chris Bobryk kiteboarding is his way [VIDEO]