Spring Lake’s Kyle Zietlow is that type of player, and he proved it in late January, when his team played Muskegon Catholic for the first time this season. 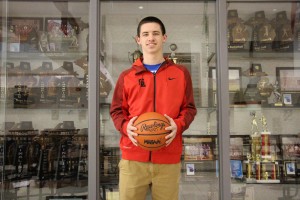 Zietlow, a senior point guard, had just missed three straight games with an ankle injury, and was no sure thing to make it back for the MCC game.

He not only managed to play, but recorded a double-double with 12 points and 10 rebounds. He also made several clutch free throws down the stretch to help the Lakers secure an important 49-45 victory.

“(Zietlow) was cleared to play the night before and he dressed, but we weren’t sure how much he was going to play,” Spring Lake Coach Bill Core said. “He ended up playing way more than we thought because of how the game went.”

Now Zietlow and his teammates must face MCC again, on Thursday night at Muskegon Catholic, with the Lakes 8 Conference title on the line. Both teams are 8-1 in the league going into the final night of the regular season.

Spring Lake will be fighting for its third straight Lakes 8 boys basketball title.

“We’re pretty confident in what we have going right now,” Zietlow said, regarding his team’s chances against MCC. “We haven’t been in this situation before, with everything on the line, but we just have to execute on the offensive and defensive ends of the court.

“It would mean a lot to win three (Lakes 8 titles) in a row because I don’t think any team here as done that before. It would truly be an honor.”

The first game between the Lakers and Crusaders was physical, with 50 fouls and 61 attempted free throws.

Both Zietlow and his coach are expecting a similar battle Thursday, and they say the team is ready

“It could be a little chippier, I think,” Zietlow said. “Both teams know what’s at stake, so we expect it to be hard fought and physical.”

If there are a lot of fouls and free throws again, the Lakers should be in pretty good shape. Both Zietlow (12.8 points per game) and Keegan George (13.8), their top two scorers, are both shooting over 70 percent from the line this season.

Zietlow can also get hot and light it up from 3-point range.

“If he shoots the three ball for us, that makes us a whole lot more dangerous,” Core said. “It could also come down to whoever makes their free throws. (MCC) will have the advantage down the stretch. We’re hoping we can get Kyle to the free throw line as much as possible.”

“My teammates do a good job at getting me the ball,” Zietlow said of his ability to score. “I just try to get to the free throw line as much as I can, and if the three ball starts going in, I can go to that as well. But I have to give most of the credit to my teammates.”

Zietlow is no stranger to winning championships. Thus far in his busy high school career, his soccer, basketball and baseball teams have combined to win seven Lakes 8 titles.

A victory on Thursday will bring the trophy count to eight, and the Spring Lake baseball squad is among the early favorites to win the conference in the spring.

“There’s two things you can say about Kyle,” Core said. “He’s a natural leader and winner. He has a realistic shot at winning nine conference championships, three in each sport.”