MUSKEGON – For most teams, losing two All-Staters to graduation would probably spell trouble.

But that’s not the case for the Oakridge softball team, which boasts an impressive collection of skilled young players and just keeps on winning. 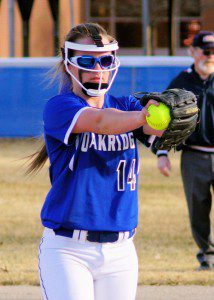 Alyssa Fessenden gets ready to deliver a pitch for Oakridge. Photo/Sherry Wahr

One of those young players is sophomore pitcher Alyssa Fessenden, who has done a great job helping to replace both departed All-Staters – pitcher Nicole Depender and shortstop Morgan Giddings.

On the mound Fessenden had a lights out 9-0 record through last week, with 68 strikeouts in 54 innings and a seriously low .778 earned run average.

She’s also done a lot of damage at the plate, taking the sting out of the loss of Giddings, who had the big bat for Oakridge last year.

Fessenden had a robust .567 batting average as of last week, with four doubles, two triples, one home run and 12 RBIs.

Oakridge Coach Joe Coletta is more than happy to have a young player contribute so much, particularly on the mound.

”For any team in fast pitch softball, your pitcher means everything,” said Coletta, whose team will face a tough challenge Saturday against several strong opponents in the Greater Muskegon Athletic Association City Tournament.

“If you have a dominant pitcher, you’re going to win a lot of games. (Fessenden) is developing as a young athlete and she learned a lot from DePender last year. She’s just a leader and a fierce competitor. On top of that, she’s a great hitter. She just understands the game.”

Despite her early success, Fessenden talks like a typical sophomore who is just happy to be on the varsity squad and contribute as much as she can. 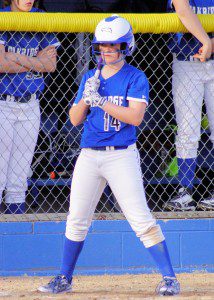 Fessenden is also excelling at the plate. Photo/Sherry Wahr

“My focus when I’m pitching is to just stay confident out there,” said Fessenden, who was an honorable mention All-State selection last spring as a freshman utility player. “I just want to do my best to lead my team. I just worry about one pitch at a time.”

The Eagles start just one senior and two juniors. The rest of the team is made up of freshmen and sophomores. But the Eagles are doing just fine, starting the season with a 12-1 record.

They are convinced they have a good chance to do at least as well as they did last year, when they won the West Michigan Conference title and advanced to the Division 3 state quarterfinals.

Oakridge lost in the quarterfinals to Gladstone, which went on to win the state title.

“They’re not your average, run of the mill freshmen and sophomores,” Coletta said. “We have five players that played key roles last year. If they’re capable, they’re capable, it doesn’t really matter about age. Our biggest challenge is mental – staying mentally strong against senior-laden teams.

“We expect to compete in the conference, district and region, and hopefully get at least as far as we did last year. We can’t settle for mediocre and the girls have been great so far this year. It was instilled in us last year and we realized that we weren’t that far away from going all the way.”

Fessenden is completely on board with Coletta’s expectations.

“The girls we got back will help a lot,” she said. “I think we can be just as good this year as we were last year.”

Lowe is second on the team with a .552 batting average. She has started for the Eagles for three years and was an All-Conference selection as a sophomore.