Walt Gawkowski just finished managing two baseball teams for five solid months in back-to-back seasons, which is a lot, even for someone who loves the game as much as he does.

So what did he do to mark the end of his grueling baseball season? 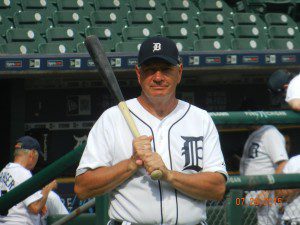 Walt Gawkowski does a baseball card pose at Comerica Park.

His wife, Joan Gawkowski, and his two grown children were wondering what to get him for a retirement gift. The Tiger fantasy camp idea came up recently, and Gawkowski gave it a thumbs-up.

After all, what lifelong Tiger fan wouldn’t want to spend an entire weekend playing on the storied field at Comerica Park, wearing the Olde English D and being coached by former Tigers like Dave Rozema and Dan Petry?

The only snag was that Gawkowski didn’t quite realize just how much baseball he was signing up for.

He played in two games on Friday night in Detroit, four games on Saturday, and another four on Sunday. There was also a big dinner and a little casino action on Saturday night.

“I guess I’m a little sore,” Gawkowski told LocalSportsJournal.com. “I just got done playing 10 games and used a few muscles I haven’t used in a while. It wore me out, to be honest with you. I wasn’t moving too well on Sunday.

“My plan was to start slow and taper off from there, but I’m not sure I followed my own advice.” 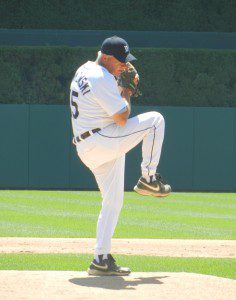 Gawkowski in the middle of his pitching windup at Comerica Park.

He retired as the Mona Shores baseball coach once already, following the 2013 season, but found himself back on the field coaching the Sailors one more time this spring.

That sort of grueling pace is now a thing of the past for Gawkowski, who decided it was time to wind up his career in education for good. He will be joined by his wife, who’s retiring from her job this week.

“They say you will know when it’s time, and I wanted to retire when I was still in good enough health to enjoy my retirement,” said Gawkowski, who still plans to manage the Clippers next year. “The first 61 years went pretty fast. It seems like 15 minutes ago I was 25.

“Both of my children live out of state, I have one grandchild with another on the way, and we wanted to maximize the time we can spend with the kids and grandkids.”

Gawkowski said the fantasy camp experience really began when he and the other players entered the visitors clubhouse at Comerica Park late Friday afternoon. He found a locker with his name on it, and a shiny new Tiger uniform waiting for him, with the name “Gawkowski” and his traditional number 15 on the back.

There was batting practice on the field and in the tunnels. There was food served in the clubhouse. There was a Saturday night dinner provided by the fantasy camp staff at Hockeytown in Detroit, and there were lots and lots of baseball games. 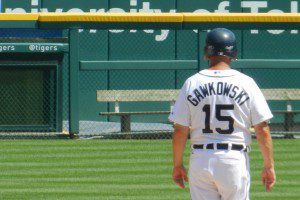 What Michigan kid doesn’t grow up dreaming of having his name on a Tiger uniform?

There were 45 players in camp who were split into three teams of 15, playing what Gawkowski called “old man’s baseball.” The average age of the players was 53, which meant Gawkowski was older than most.

But he certainly didn’t shy away. He played every position on the field, tried his hand at pitching a few times, and had quite a few hits in his many at-bats.

“I pitched a little bit,” Gawkowski said. “I wanted to pitch off the same mound as Justin Verlander and David Price.

“The quality of pitching was not very good, but Saturday I had a bunch of hits. I thought I gave a pretty good account of myself.”

Gawkowski had a previous experience on a Detroit playing field, He coached a team in a 1995 Michigan high school All-Star game at Tiger Stadium.

But that game was about the players, because it was Gawkowski’s job to focus on them. This trip was all about Gawkowski, and putting a personal exclamation point on his lifelong love affair with baseball.

“This really took me back to my youth,” he said. “I was 10 years old the first time I went to a game at Tiger Stadium. My dad took me.  I think back to that old ball park, the first time you walked through the tunnel and saw the green grass and the beautiful white uniforms. That was etched in my mind forever.

“This was pretty cool too. To be in a major league uniform with my name on the back and the number 15, which has always been my number, was kind of surreal. I guess that’s why they call it a fantasy camp.”

Whitecaps swept in South Bend, fall to 35-74 overall on the season