MONTAGUE – The Montague volleyball team has an uncommon mix of youth and veteran talent this year, and it seems to be working just fine.

It’s only fitting that such a young group be led by a junior. 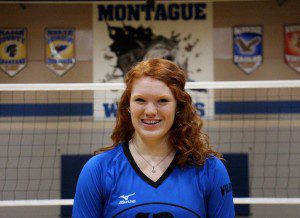 Emma Flagstead, a 6-foot-3 middle blocker, has been the catalyst for Montague’s overwhelming volleyball success in 2015.

Flagstead may be listed at middle blocker, but pigeonholing her to one spot on the court is neither accurate nor wise for opposing defenses.

“Her position is middle but she hits from everywhere she swings – left, right, middle,” said Montague head coach Shawn Bectel, whose team enters the week with an impressive 28-7-1 record.

“Emma is one of those one-of-a-kind players where there’s not very many people that can stop her. When she’s on, you can’t do anything about it.“

Flagstead’s numbers in 2015 back up her coach’s words. She leads the team with 366 kills and a .350 hitting percentage.

She reached the milestone 1,000 career kill mark over the weekend. While her coach isn’t certain, he said she may be the first Montague player to accomplish that feat.

“It’s a pretty big deal,” Bectel said. “Emma is one of those kids that not a lot of programs have. This is only her third season. She could reach 2,000.”

Flagstead has also recorded a team-best 64 blocks this season. The Wildcats as a team only have 136.5.

With imposing height and a lethal swing, Flagstead is the focus of nearly every defense that takes the court against the Wildcats.

On Tuesday, that defense will be Whitehall’s, and the stakes could hardly be higher for a regular season matchup.

Montague and Whitehall are both perched atop the West Michigan Conference with 4-0 league records. Tuesday’s match will leave one team leading the conference, and give the winner temporary bragging rights in the neighborhood rivalry between the two schools.

The Wildcats will be trying to start the process of dethroning Whitehall, which has won seven consecutive conference championships.

Both teams understand that Flagstead’s play could be a decisive factor on Tuesday, one way or another.

“I know that when I’m on at least, we work really well,” Flagstead said. “I feel like when I have a bad game it kind of affects everybody so I really work to make sure I always play my personal best or as hard as I can because it brings everyone else up.”

Colleges have already started to look at Flagstead, though she still has another season of high school volleyball in 2016. Grand Valley State has interest, and would like to use Flagstead to continue the process of restocking an abnormally bare cupboard.

But for now, Flagstead is helping to build a program of her own.

Flagstead convinced many of her teammates to join her on a club team, and as a result the Wildcats have played a lot together and gained a lot of chemistry on the court.

“I started our club but more girls got more involved,”  Flagstead said. “A bunch of them played with us last season.”

Flagstead’s influence goes further than this year’s team, however.

Bectel, in his fourth year with the team, runs a youth camp every season to bring young athletes into the sport before high school.

Flagstead helps with the camps and convinces young players to stick with the program. That will help build a healthy future for Montague volleyball.

“Off the court, Emma is a great role model for kids,” Bectel said. “When we’re working youth camps and stuff, she is great with the kids. That for me as a coach is wonderful because when they see one of our best players is giving them the time of day, that’s huge for a kid, and that means a lot to our program.”

The best example Flagstead could set for the youngsters is to lead Montague to a conference title and a long run in the state tournament.

The Wildcats may have a pretty young roster, but with Flagstead on their side, nothing is out of the question.

“I think we could have a shot at state,” she said. “This is our best year to do it and we should really capitalize on all the stuff that we’re working so hard for. We’ve all been together for a couple of years now, we all kind of work as a machine, we all have our roles.

“We all know what we have to do so we’re good.”

Flagstead leads Montague over Whitehall in Class B volleyball semis