EAST LANSING – They don’t play much American football in Liberia.

So until he moved to the United States as an 11-year-old, John Waller had never even heard of the sport.

But suddenly the 2012 graduate of Western Michigan Christian High School is a brand new member of the Michigan State University football squad, the second-ranked team in the nation. 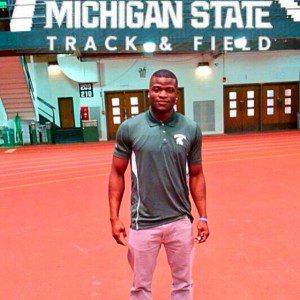 John Waller inside the track and field practice facility at Michigan State University.

He hasn’t suited up for a game yet, but he has been practicing with the Spartans, and  was on the sidelines when MSU hosted Air Force and Central Michigan University.

That’s pretty impressive for a young man who enrolled at MSU over the summer to study political science and participate on the Spartan track team.

“Two or three weeks ago I was watching these guys on TV,” Waller told Local Sports Journal. “Now I’m in the locker room having normal conversations with them. This is surreal.”

While Waller is eager to demonstrate his skills for the MSU coaches, he said he also wants to shine a positive light on his high school.

“I want to represent WMC,” he said. “It’s a small Christian school and a lot of people don’t know about it, but it’s had some great athletes, in soccer and basketball and other sports. Now I want to do something in football.”

Waller was an athletic jack-of-all-trades in high school. 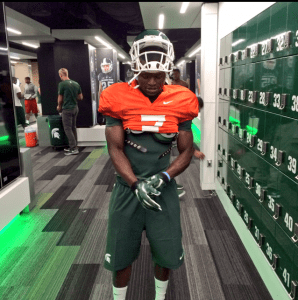 He starred on the varsity soccer team as a freshman and sophomore, played basketball for several years and earned All-State honors in track as a senior.

He traded soccer for football in the 11th grade. WMC doesn’t have football, so he joined the North Muskegon varsity as a running back/defensive back through a co-op agreement between the two schools.

Waller earned a football scholarship to Ferris State University. He sat out as a redshirt freshman in 2012 and played for the Bulldogs as a defensive back in 2013, before leaving the program and the school for personal reasons.

He enrolled at Muskegon Community College in 2014 and spent the fall playing for the MCC soccer team.

This year he enrolled at Michigan State University on a partial track scholarship. He was running on campus this summer when he was spotted by an MSU football coach who kicked up a conversation, learned of his background and offered him a tryout.

Waller tried out for the team the week after the Oregon game and was awarded a walk-on spot on the roster.

“I’m just so grateful that the coaches are giving me the opportunity to be a small part of something special,” he said.

Last week he found himself on the practice squad, playing defensive back against the Spartan’s first-string offense. That means he was assigned to cover a receiver that Spartan quarterback Connor Cook was throwing to.

“I’m not sure when I might be suiting up (for a game),” Waller said. “Right now I’m just really happy and excited to be part of the team.”

Waller said he had an exciting moment in practice last week when Spartan head coach Mark Dantonio gave him a compliment.

“I was on the kickoff team and I got down there pretty quick, and after the drill he said ‘Good job,” Waller said.

Just standing on the sideline in street clothes for his first game as a member of the team was a thrill for Waller.

“People say playing Division 1 sports is different, and it’s day and night,” he said. “That stadium was full of crazy people. You can’t hear yourself think. It was truly amazing. It gave me the chills. I can wait to dress up with the team and run into that stadium.”

A long way from Liberia

The truly amazing part of the story is that Waller grew up in the western African nation of Liberia, not far from the capital of Monrovia.

He said his birth mother left the family when he was very young and his father was rarely around, so he was left in the care of his older sister.

By the age of 10 he had the courage and audacity to walk into Monrovia and seek help for himself at the American embassy, where he happened to meet Darin and Angela Waller of New Era.

Months later he was adopted by the Wallers, who brought him back to West Michigan and enrolled him in the Christian school system.

He said he was thrilled when he learned the Wallers planned to make him a part of their family.

“That was the best news I had ever heard,” he said. “I’m very grateful for my family and my life.”

Waller said athletic skill has always come naturally to him, but before his adoption his only experience was playing street soccer in Liberia.

“My Dad introduced me to American football,” Waller said. “I finally started to like the sport. I like the team element and the energy on the field.

“I always thought I could be a good athlete. I’ve always wanted to show people I could be good. In Liberia I never got the chance.”

Darin Waller said he was thrilled to hear the news that his son had made the Spartans.

“He called me the morning after his tryout and said he wasn’t sure if he did good enough,” Darin Waller said. “I said, ‘How cool would it be if you made it, that’d be great.’

“Now everyone asks me how he did it, and I say I don’t know, he just did. All things are possible through Christ. Just look at it. If you believe, anything can happen.”

Waller agrees with this father about God’s role in everything, but he also gives a lot of credit to his parents.

“They came to Liberia to pick me up,” he said. “They are the most amazing people in the world. They have nine kids, five of whom are adopted. They’ve done so much for me. If it wasn’t for them I wouldn’t be talking to you right now.”