He had enough to worry about in the No. 3 singles championship match against Whitehall’s Connor Briegel. 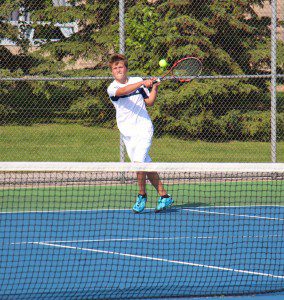 The two of them battled for three long, hard sets, with Briegel taking the first in a tie-breaker and Gossett coming from behind to take the second.

By the time they were battling in the third and deciding set, all of the other matches were done and everyone was gathered around their court.

What Gossett didn’t realize was that Mona Shores and Whitehall were tied in team points at 36. The winner of his match would earn six points for his team and the loser would get five.

That meant the winner would clinch the tournament championship for his team.

Without that knowledge, Gossett calmly rallied from a 4-3 game deficit in the final set, battled to a 6-6 tie, then beat Briegel 8-6 in a dramatic tie-breaker. 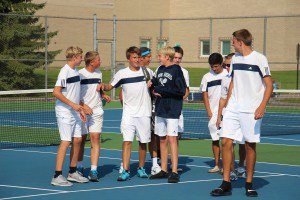 Koby Gossett reacts in disbelief after being informed his match decided the city championship for Mona Shores. Photo/Jason Goorman

That gave Mona Shores the team title on its home courts with 42 points while Whitehall finished second with 41. Reeths-Puffer was third with 27 points, followed by North Muskegon (23), Western Michigan Christian (22) and Fruitport (13).

“I figured it out right after I won,” Gossett said about fully understanding the impact of his victory. “My teammates came out and told me right afterward. I am very happy I didn’t know before that. It would have been way harder.

“I am very happy. This is the most happy I’ve been in a while, because I was able to pull it out for my whole team.”

Taking second in their flights for Mona Shores were Casey Walukonis (No. 2 singles) and Max DeVoogd and Destry Follet (No. 2 doubles). 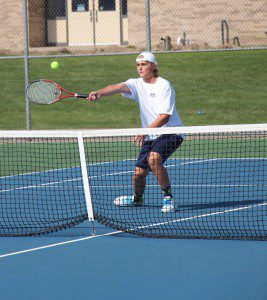 “It’s something else to have it come down to the last match to decide first and second place, but (Gossett) played very well,” said Mona Shores Coach Craig Kelley. “It was just so much like college basketball. Somebody will make a run then stop, then somebody else makes a run.

“It was just a very good match. For it to be the last match and go three sets to decide the tournament, you couldn’t ask for much more.”

Whitehall also had a very strong day, placing finalists in all but one flight.

Winning flight championships for the Vikings were Drew Bolles and Judd VanBergen (No. 3 doubles) and Spencer Trnka and Ben Stenglein (No. 4 doubles).

Besides Briegel, runners-up for the Vikings were Andy Esh (No. 1 singles), Connor Boyd (No. 4 singles), Eric Butzer and Alec Milliron (No. 1 doubles) and Jack Zwemer and Andrew Tallquist (No. 3 doubles).

The top individual honor of the day went to North Muskegon senior Nick Schanhals, who defeated Whitehall’s Esh 6-2, 6-4 in the No. 1 singles championship match. 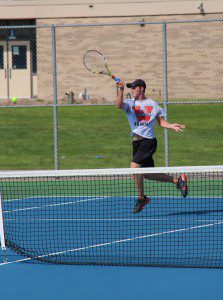 Andy Esh on the Whitehall return during the No. 1 singles finals. Photo/Jason Goorman

While the more intense Esh hurt his chances with unforced errors and complaints about a few calls on the court, Schanhals played a more relaxed match and won key points when he had to.

“We’re out there to have fun,” said Schanhals, a second-time city champion who avenged two previous losses to Esh.

North Muskegon’s Bobby Tarrant won the championship in No. 2 singles. Reeths-Puffer’s Dan Enberg and Chris Manette were runners-up at No. 4 doubles.