Mom, 24, returns to college as the top runner for the MCC women’s cross country team

MUSKEGON – Muskegon Community College runner Deanna Near was unsure what to expect from herself before her first race of the season. 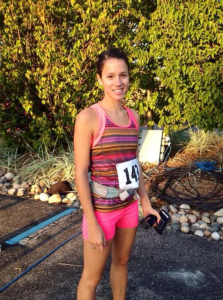 “I’m going into this with no expectations,” she said. “But I’ve been feeling really good in practice. We’re running really good, so I’m hoping the meets will be the same way.”

As it turned out, Near did a lot better than good.

The 24-year-old freshman came in 12th out of 58 women runners, and first on her team. The former high school standout from Montague took second among female freshman – mostly 18- and 19-year-olds – with a 5K time of 20:25.

Her success continued last weekend at the Jet Invitational at Jackson Community College, where she won the women’s race overall and set a collegiate women’s record on the 5K course with a time of 21:25.

College may be treating Near well, but she is not typical freshman. After years away from competitive running, and having two young children, Near is returning to school and dealing with obstacles many of her competitors know nothing about.

“I started at 25 minutes and I slowly started getting better,” Near said. “It was hard.”

Running for Montague by her maiden name of Pineda, the 2008 grad set a school record of 19.06 in the 5K before she married Robert Near and moved with her Army husband to Alaska. The Nears returned home a short time later and Deanna dedicated most of her focus on raising her daughter Haley, 5, and son Xavier, 3.

In 2012, Near competed in several 5K fun runs, and the following year completed two marathons. This year Near decided to return to school full time, inspired in part by her husband’s master’s degree.

“I stopped running up until my son was nine months old,” Near said. “I’ve been a stay-at-home mom for six years and I just felt like I needed to use my brain.”

Near participated in an MCC 5K fun run before the fall semester began, and word quickly got back to Jayhawks cross country coach Dan Fishel, who invited Near to join the team. 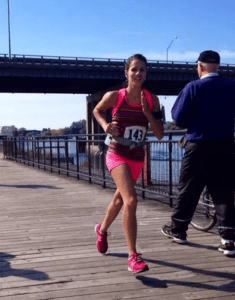 Deanna Near runs the boardwalk in a recent race.

“I recognized her maiden name and she was a really good runner in high school, I remember.”

Near joined her younger classmates at the team’s training camp at Wilderness State Park in mid-August and quickly earned their respect, Fishel said.

“She’s a bit older than the other girls, but it doesn’t seem to make a big difference,” Fishel said. “They respect her because, right now, she’s the fastest girl on the team.”

“I don’t know how fast she’ll go, she keeps improving quite a bit,” he said. “I have a feeling if she doesn’t get hurt, and continues to train like she’s been training, she can beat her high school (personal record) by the end of the year.”

Near said a new personal best is her goal for the cross country season, but stressed that she’s equally focused on her studies, which wasn’t always the case in high school.

“In high school I was more about sports than academics,” she said, adding that the responsibilities of motherhood and family life have convinced her to make the most of her time in the classroom.

“Now that I have a family, I’ve been doing a lot better,” said Near.

“It takes a lot of sacrifice and dedication … and she’s doing it especially well,” Fishel said. “I’d say this is the best women’s (cross country) team we’ve had at MCC and she will probably be our top runner, so it’s a pretty exciting time.”