The Sailors had six golfers in the top 10, and only the top four scores on each team count.

That performance was more than enough to help the Sailors capture the tournament title at Stonegate Golf Club with a score of 378, followed by North Muskegon (389), Reeths-Puffer (398), Fruitport (463), Whitehall (472) and Western Michigan Christian (517). 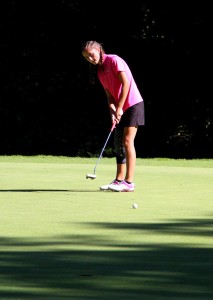 Maddie Burda and Kendall McKinley, whose scores did not count, both shot 99’s for the Sailors.

“Winning any tournament that includes teams from the Greater Muskegon area is a big deal,” said first-year Mona Shores Coach Mike Phillips. “Most of the girls know each other from summer tournaments, local events or conference meets. I think that’s what makes this tournament special. It’s about cross-town bragging rights.

“I’m just real happy for our girls and their parents who have been so supportive all season. It’s a great team win.”

Reeths-Puffer freshman Karina VanDuinen overcame a shaky start to shoot an 85 and take first place in the tournament.

VanDuinen shot a 44 on the front nine and started the back nine with a double and a triple bogie before finding her winning stroke.

“I kind of stopped worrying about my score, and as shots came close and putts started to fall, I just kind of changed a little bit from being mad at myself to getting back in it,” VanDuinen said. 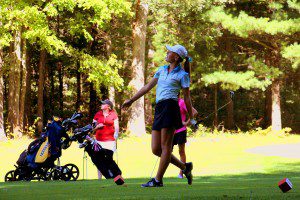 “Pressure doesn’t get to me, I’m all about playing. I don’t let it get to me because I am not worried about anyone beating me up too bad. Unless I’m playing someone really good, they will have to beat me.”