Oakridge boys hoops squad tightens up on ‘D’, heats up from 3 in win over North Muskegon 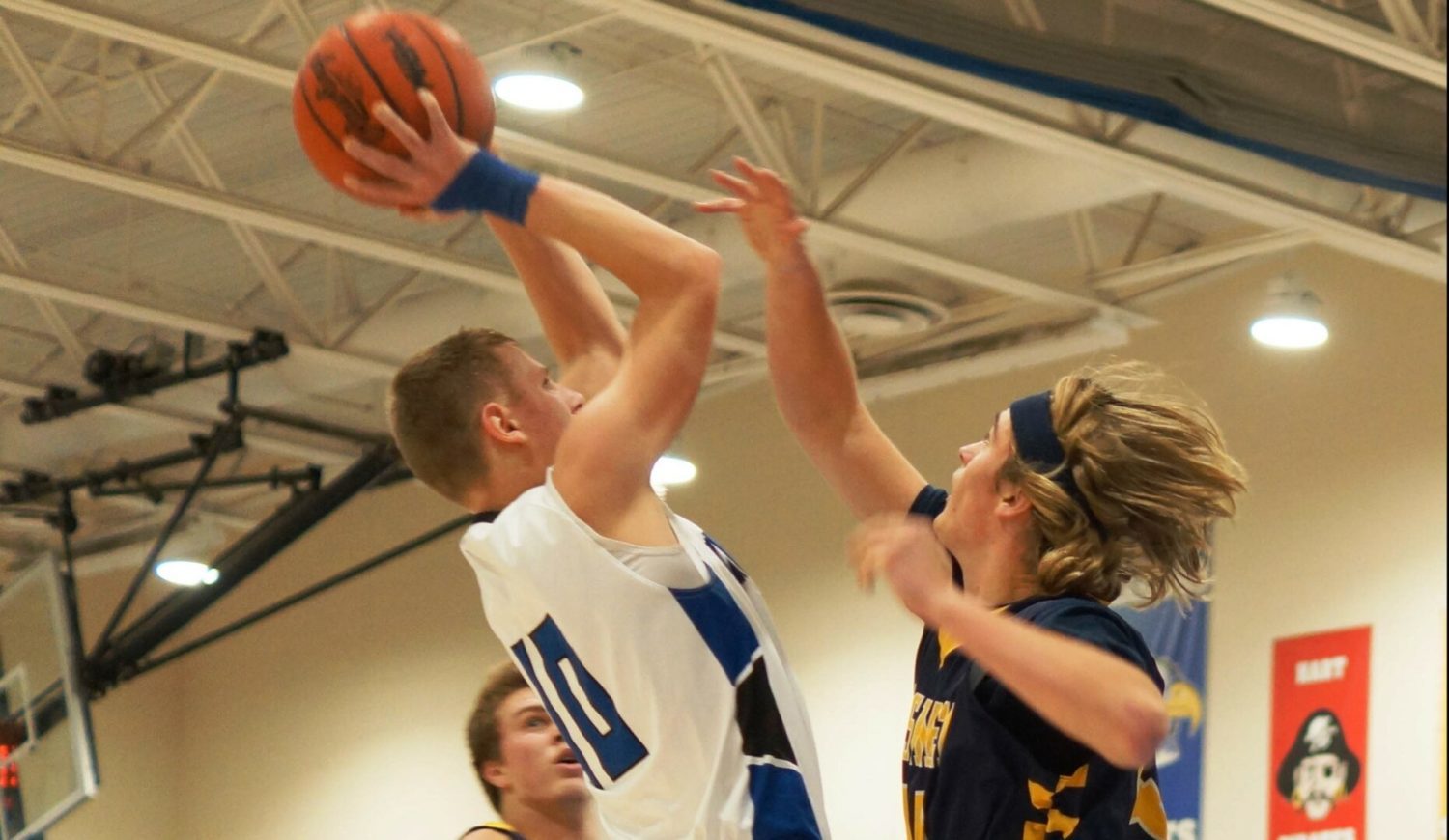 EGLESTON TOWNSHIP – In a gauntlet like the West Michigan Conference, winning games at home is key.

Coming off a tough loss at Whitehall on Friday, Oakridge hosted North Muskegon Tuesday, looking for the season sweep against the Norse.

The Eagles found their groove in the second half, pulling away from North Muskegon and earning an impressive 61-44 victory. The Eagles improved to 8-4 overall with a 6-3 mark in the WMC.

Oakridge now goes on the road for their next four games. 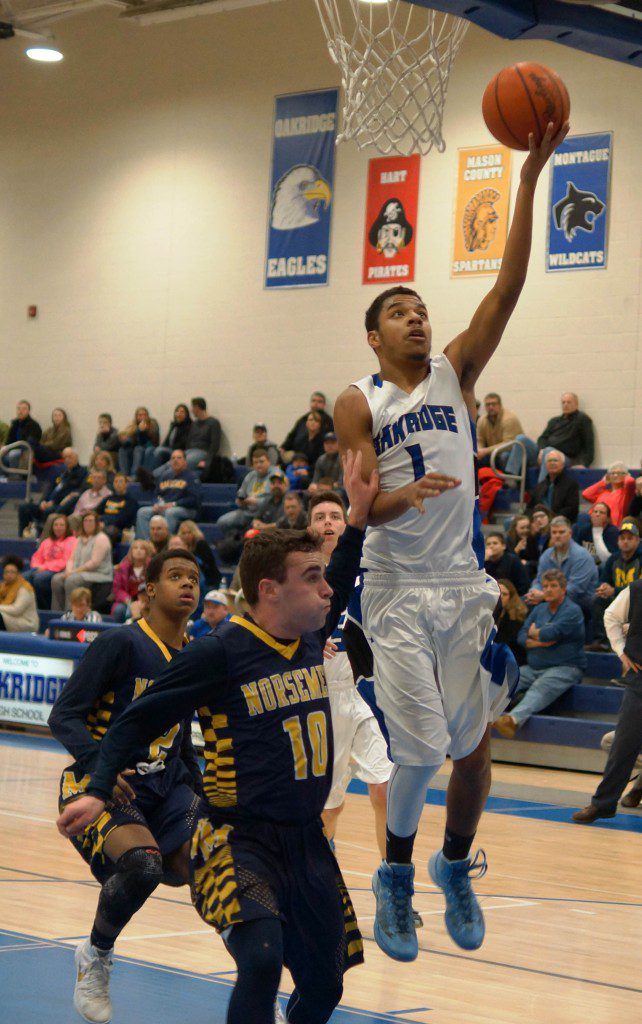 “I think that surprised them, I think we caught them off guard. We just wanted to try confusing them with our defense. We mixed in a lot of different things at them just so they had to think every time on the floor.”

The game didn’t start out especially well for either team. The first half featured 19 combined turnovers and saw North Muskegon (8-4 overall, 6-3 league) shoot just 25 percent from the field.

Oakridge didn’t fare much better, shooting a meager 29 percent but it was good enough to carry a 23-21 lead into halftime.

“You’re not going to win against Oakridge scoring 44,” said North Muskegon head coach Chuck Rypstra. “That’s a low output for us, credit them for their defense… 44’s not going to win many games.”

Oakridge exited the locker room with a new focus. Led by Nate Wahr, the Eagles hit four out of five from beyond the arc and outscored the Norse 27-14 in the frame, leading 50-35 entering the fourth.

Wahr scored seven of his 16 total points in the third quarter. The Eagles got three-pointers from some unlikely sources out of the gate, as Fletcher Chase and Jaegar Beattie connected from deep and Brady Luttrull hit two of his own to put the game out of reach. 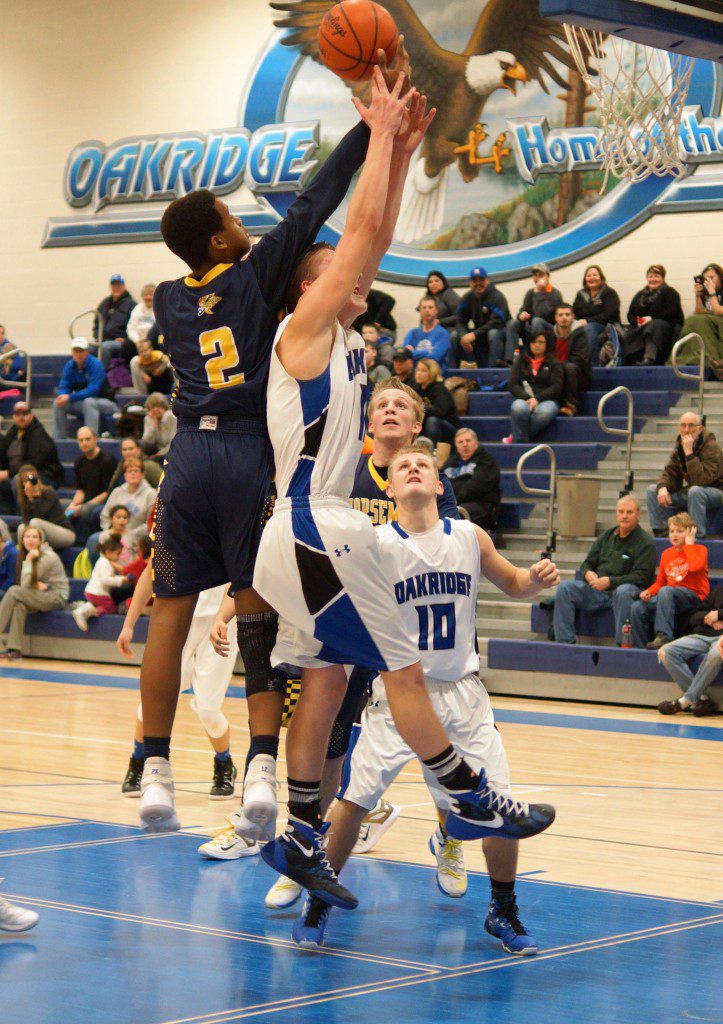 TJ McKenzie gets up for the North Muskegon rebound against Oakrdiges Nate Wahr. Photo/Sherry Wahr

“The first half I think we made a couple of careless mistakes, I think we took care of the basketball better in the second (half),” Ruel said. “Going in at halftime, I told the guys that we had probably one of our worst games in the first half but yet we’re still two points ahead.

“I figured once we got in rhythm, once we got it going…we got Brady some open shots, Nate Wahr did well in the middle of the paint and (James Cooper III) did a good job. He didn’t have his shot tonight but he made a lot of good passes, got a lot of rebounds, and did the other things we needed him to do.”

Facing a 15-point deficit entering the fourth quarter, North Muskegon tried to make a comeback but Oakridge was able to run out the clock and clinch the win.

Luttrull led all scorers with 21 points while Erick Bleakley was the only Norseman in double figures with 15 points in a losing effort.