MUSKEGON – Gus Keur has been a crucial  lifeline for the North Muskegon girls’ soccer team all season.

But her performance in Thursday’s Division 4 district semifinal game against Muskegon Catholic may have been her most important to date. 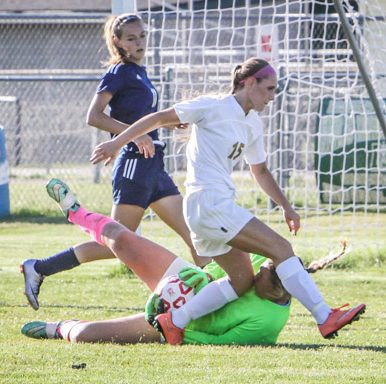 Goalie Gus Keur puts herself on the line to make the save as MCC’s No. 15 Maddie Olsen nearly gets the loose ball. Photo/Joe Lane

The senior goalkeeper was on her game in the first half, when her team was being dominated by Muskegon Catholic. She stopped eight shots before halftime, many from close range, to maintain a scoreless tie at the break.

Her teammates woke up in the second half and took their turn dominating play. North Muskegon finally broke the deadlock with 7:14 remaining in the game with a goal by Hannah Landstrom and escaped with a 1-0 victory on MCC’s home field.

A district championship would be icing on the cake for North Muskegon, which went 10-0 in league play this season and won its first West Michigan Conference girls soccer title in years.

In the first half it looked as though Muskegon Catholic would have a successful day.

The Crusaders outshot the Norse 8-1 and had several great opportunities to score.

But Keur was more than up to the challenge, stopping nearly everything that came her way. By the end of the game she had registered her 14th shutout of the season.

“She worked so hard during the offseason and she’s had a breakout year,” North Muskegon Coach Ryan Berends said about Keur. “She’s been beyond belief. I’m so proud of her and this team. They have built something special.” 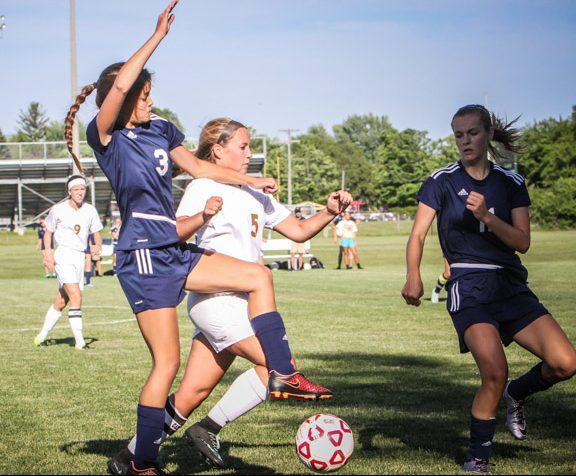 MCC sophomore No. 5 Adeline Bonnette gets wrapped up by No. 3 Megan Sroka. Photo/Joe Lane

North Muskegon turned the tables in the second half, outshooting MCC 9-1.

Isabelle Bertolone, Muskegon Catholic’s sophomore goalie, took her turn being brilliant, making great save after great save to keep the game scoreless until the final minutes.

But Bertolone was whistled for stepping out of the goalkeeper’s box while punting the ball with 7:14 left in the game, giving North Muskegon a free kick in front of the goal, must outside the box.

Landstrom calmly placed the free kick to Bertolone’s right and found the mark, providing North Muskegon with the winning goal.

“When that happened I was so excited,” Landstrom said. “At first I thought it was going to be an indirect kick, but when they said it was a direct kick I really wanted to take it. I’ve been practicing that shot for so long.”

Muskegon Catholic finished with a 12-6 record, its most successful season in years.

“It’s the best record we’ve had in a while – even the games we lost were close games,” said Muskegon Catholic Coach Michael Banka. “I’m very proud of how the girls played. I thought today was an amazingly tough game and all the girls played really well. But teams played great for 80 minutes.” 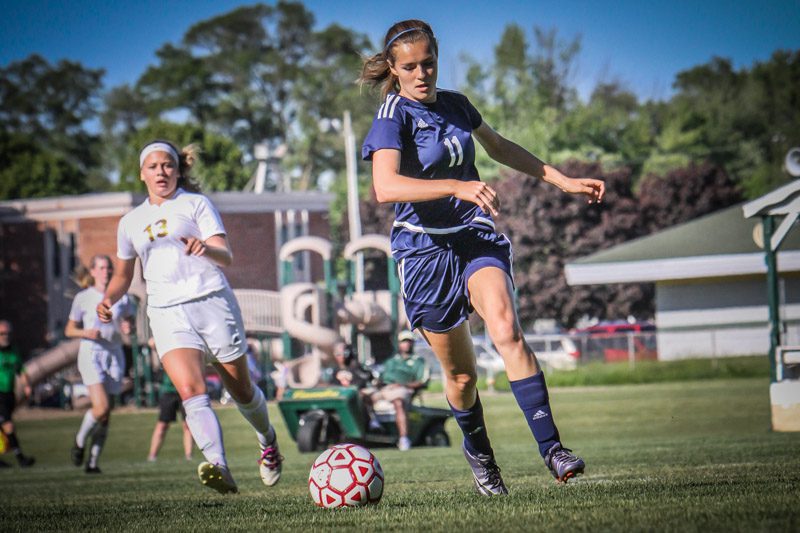 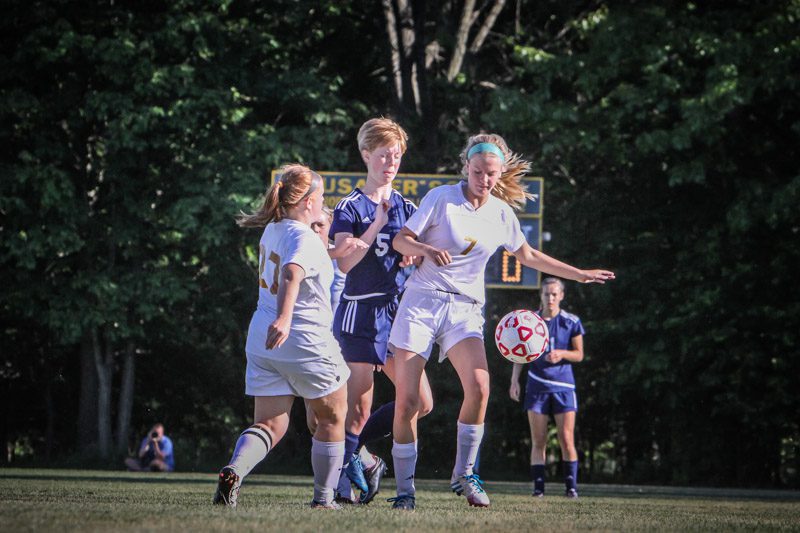 No. 5 Grace Berends tries to split up MCC pair No. 7 Emma VanFosse and No. 27 Erin Ladd. Photo/Joe Lane 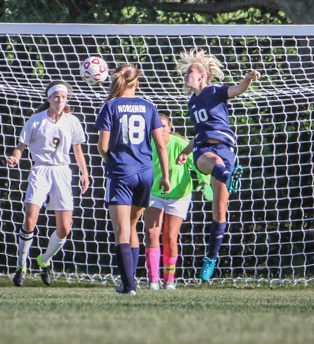 Jim Brandstatter to be guest on WLCS 98.3 FM Power Hour, Lumberjacks come to town on Friday and Saturday