MONTAGUE – The Montague-Whitehall rivalry is one of the most hotly contested in Michigan.

The Battle for the Bell series was an even 36-36 coming into Friday’s showdown, and both teams were

coming in unbeaten for the first time since 1985.

So everyone expected a great game. But Montague spoiled the hype.

The Wildcats dominated the game from start to finish and walked away with a 41-20 victory.

Montague improved to 5-0 overall and 4-0 in the West Michigan Conference standings. Whitehall fell to 4-1 and 3-1.

Most of the scoring came in the first quarter, with the Wildcats grabbing a 27-13 lead. Montague added a touchdown in the second quarter to take a commanding 34-13 halftime advantage.

Montague moved the ball with ease in the first half and played strong defense throughout the contest to capture the surprisingly easy victory.

Montague head coach Pat Collins said the game was a good measuring stick for his team.

Montague’s No. 6 Josh Weesies gets away from Whitehall defense. Photo/Tim Reilly

“Whitehall is a great team,” he said. “They played hard. I think that shows just how good we are.”

Defensive play was a huge key for Montague. The Wildcats intercepted three passes on the night, including two by Bryce Stark, and forced five turnovers on downs.

Collins said the team’s versatility was also a key.

“We don’t have great numbers,” he said, noting the fact that the Wildcats only dress about 20 players. “But our guys can play football.”

The two-headed rushing attack of Eddie Caviedes and Stark led the Montague offense, combining for more than 250 yards. Collins says Caviedes, who is also the team’s placekicker, is one of the best around.

“He’s a fire plug,” Collins said. “Pound for pound he’s the best player in the state.”

Whitehall got on the scoreboard first, thanks to a 60-yard kick return by Jack MacArthur that set the Viking offense up at the Montague 18-yard line.

The Montague defense stopped the Vikings short of the end zone, but a roughing the kicker penalty gave Whitehall another chance. Quarterback Casey Huizenga ran it in from one yard out, and the extra point was blocked, giving the Vikings a 6-0 lead in the first quarter.

Then Montague’s offense took over, scoring three touchdowns in the next 3:46.

Quarterback Dylan Stever hit Jake Jancek with a 16-yard touchdown pass to even the score at 6-6. Caviedes ripped off a 74-yard touchdown run on the first play of the next possession and Montague led 13-6.

Stark finished off the scoring flurry with a six-yard touchdown run, making the score 20-6.

Bryce Stark looks back at the Whitehall defense. Photo/Tim Reilly

Whitehall responded with a 35-yard touchdown pass from Huizenga to Lukas Evans with 1:06 left in the first quarter.

The Wildcats struck again when Josh Weesies took a 63-yard pass from Stever for a score to end the first quarter.  Kenyon Johnston scored the only touchdown of the second quarter on a 34-yard reception, giving Montague a 34-13 halftime lead.

Stever added a one-yard scoring run in the third quarter to put Montague up 41-13.

The final score of the game came on an 85-yard interception return by Whitehall’s Justin Brown.

Caviedes finished with 134 yards on the ground while Stark added 123 for Montague. Stever passed for 138 yards, including two touchdowns. Weesies had a game-high-88 receiving yards for the Wildcats.

JoJo Dowdell was the bright spot for the Vikings’ offense, running for 119 yards. Brown led Whitehall with 39 receiving yards and had two interceptions on defense. Huizenga finished with 123 passing yards. 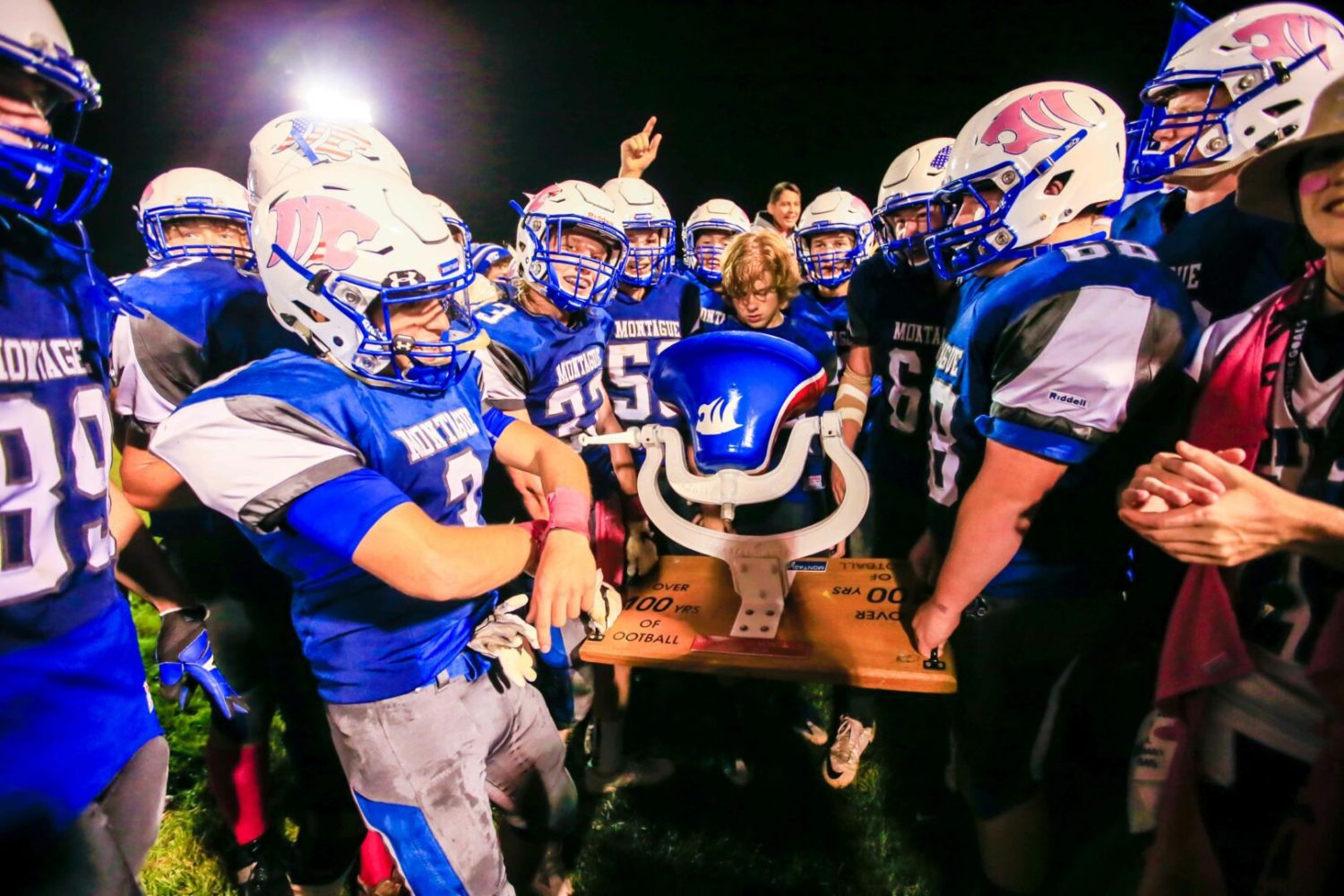 Montague celebrates winning the bell following its win in 2016. Montague has won the “Battle of the Bell” for the. past three seasons and will renew the rivalry this Friday at Montague’s field for a 7 p.m. kickoff. Photo/Tim Reilly 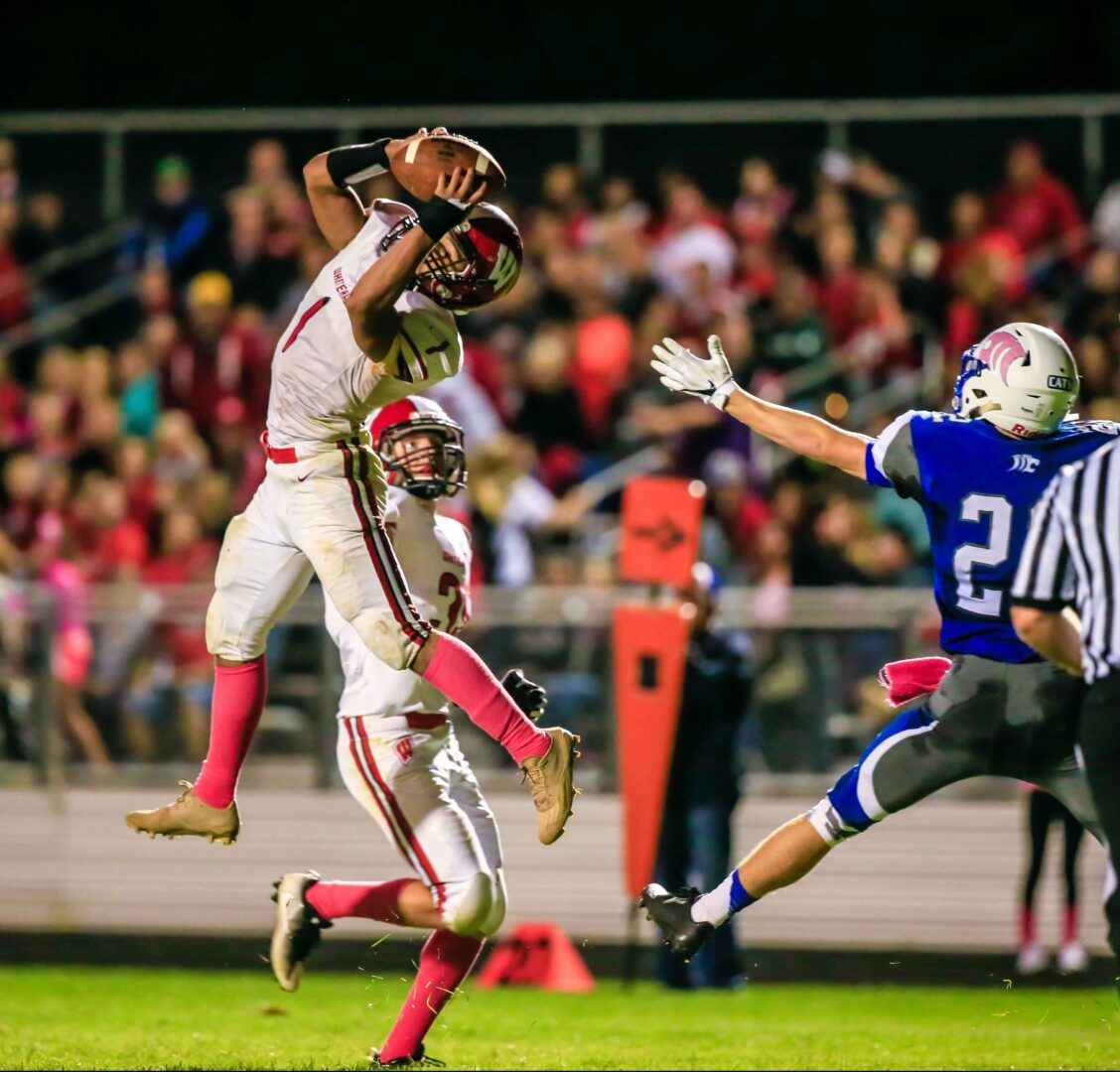 JoJo Dowdell comes down with the Whitehall reception. Photo/Tim Reilly 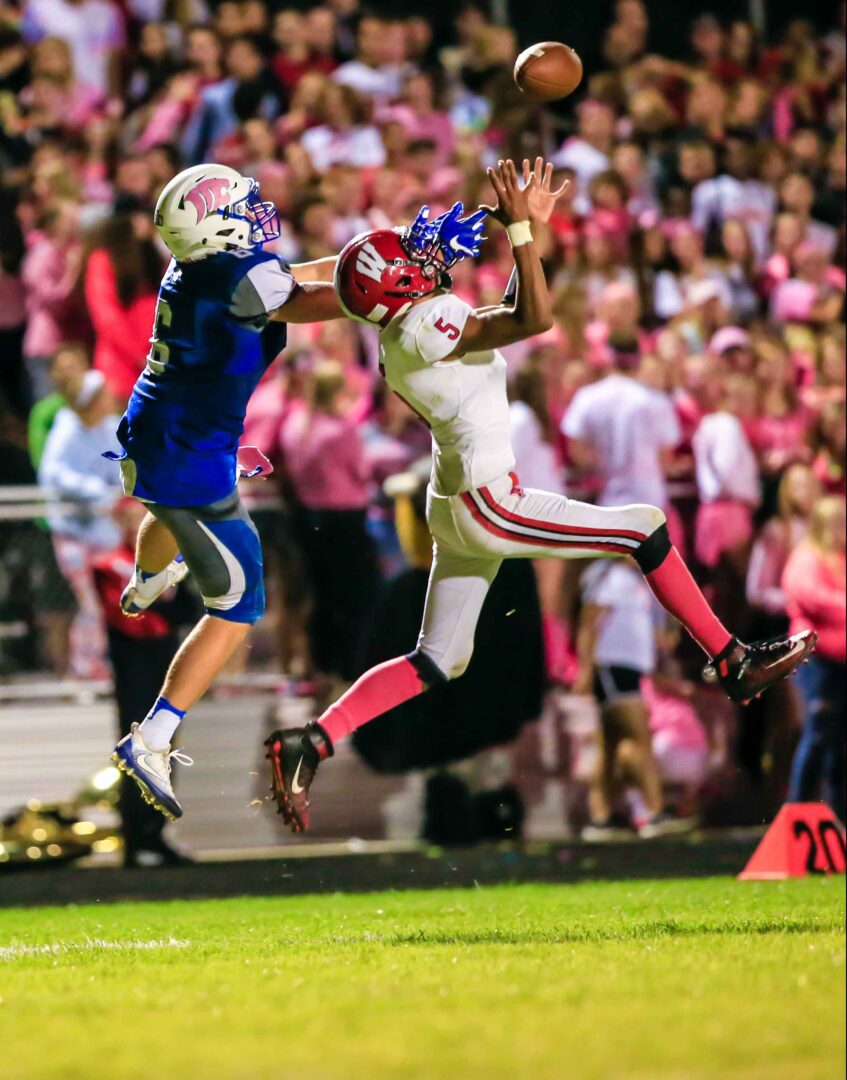 Whitehalls No. 6 Donnell Smith tries to get in front of Montagues No. 6 Josh Weesies on the pass. Photo/Tim Reilly 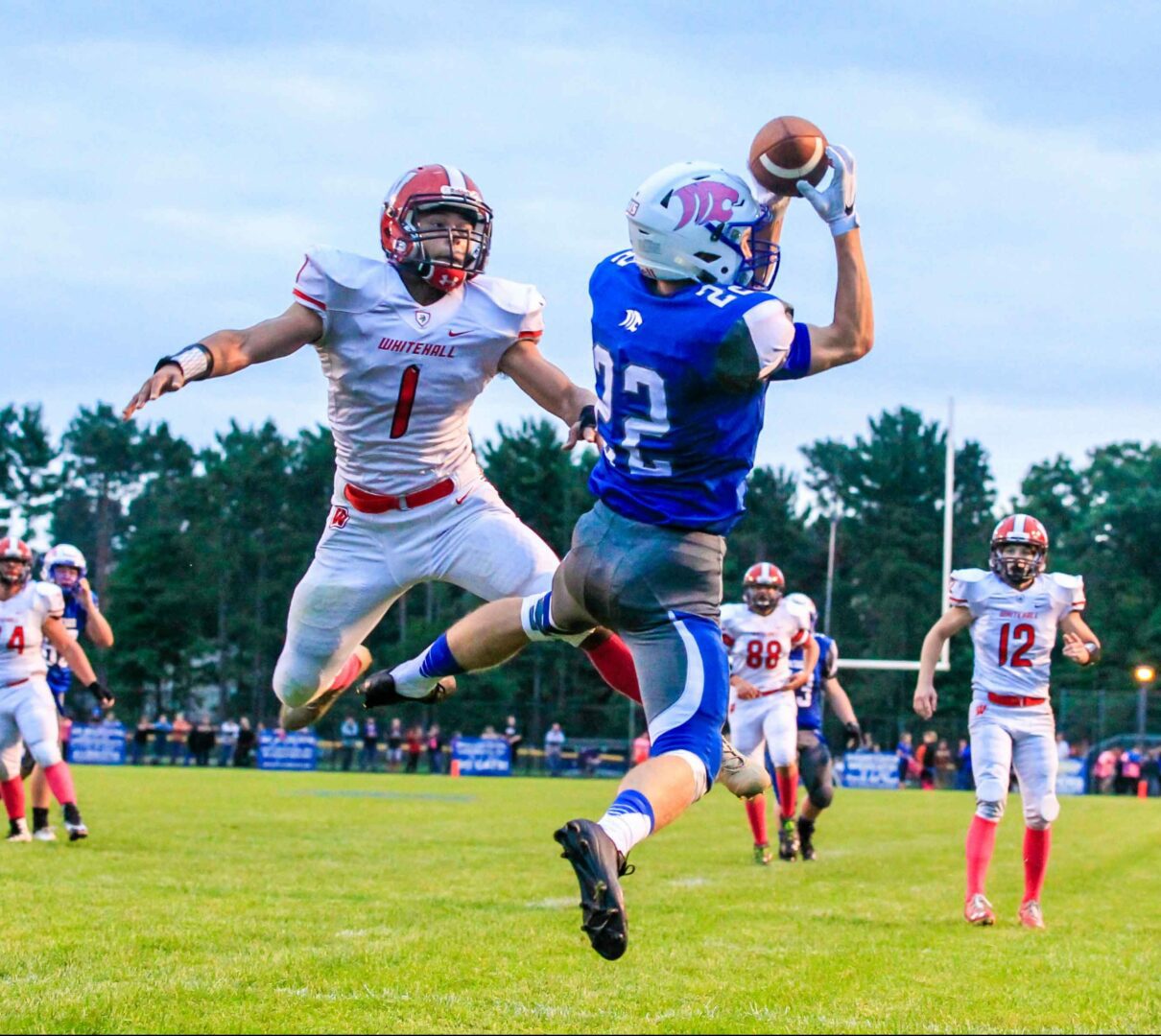 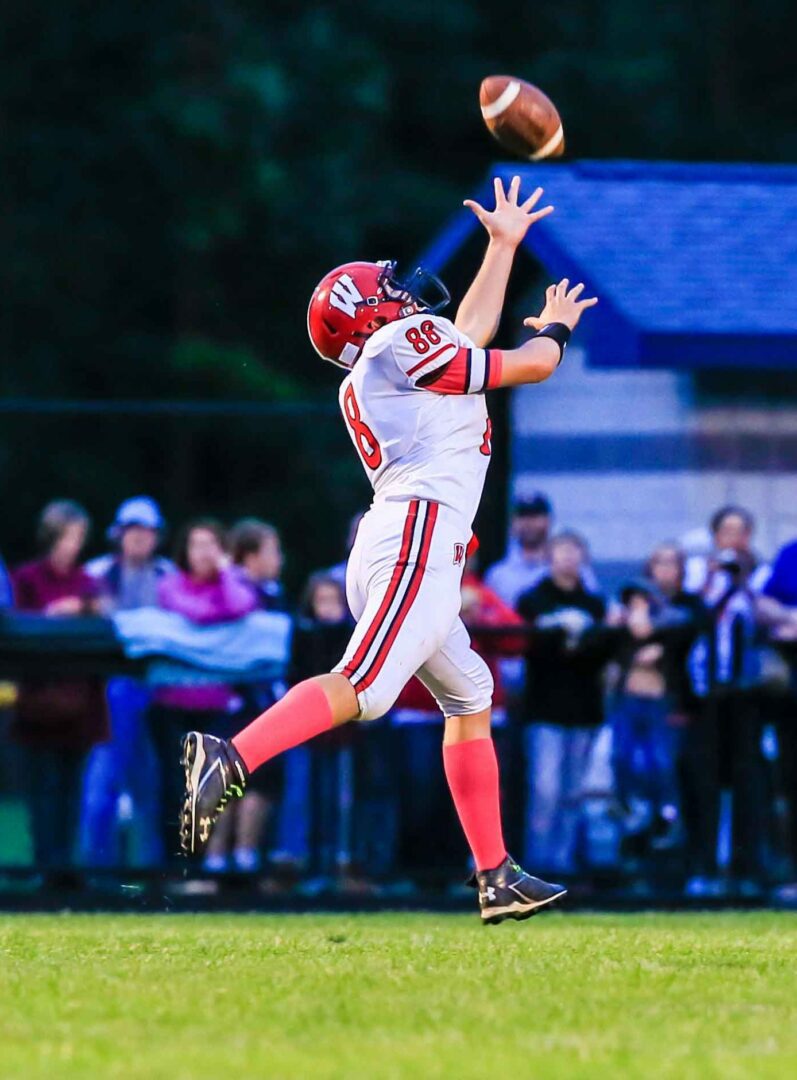 Luke Evans looks for to make the catch for Whitehall. Photo/Tim Reilly 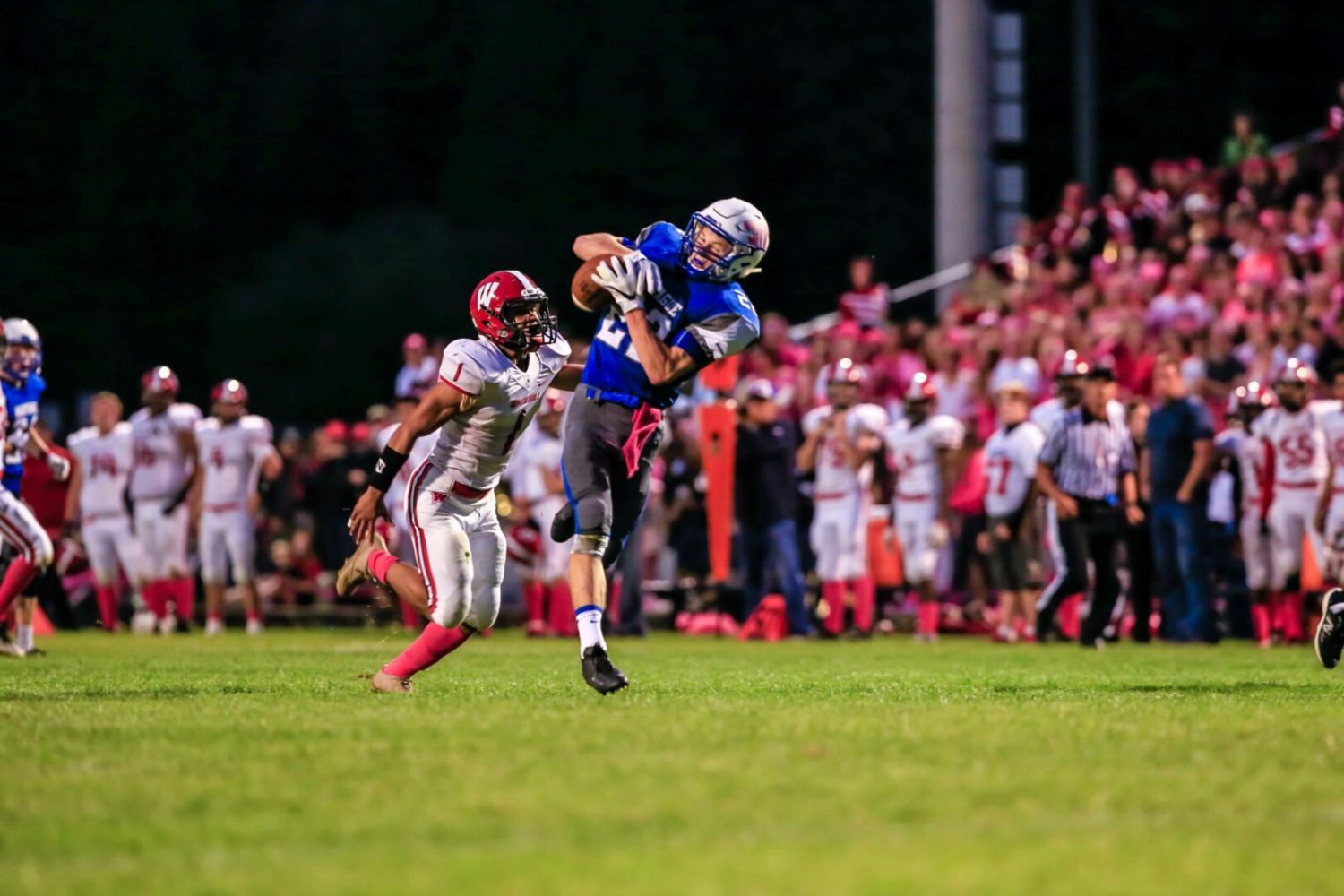 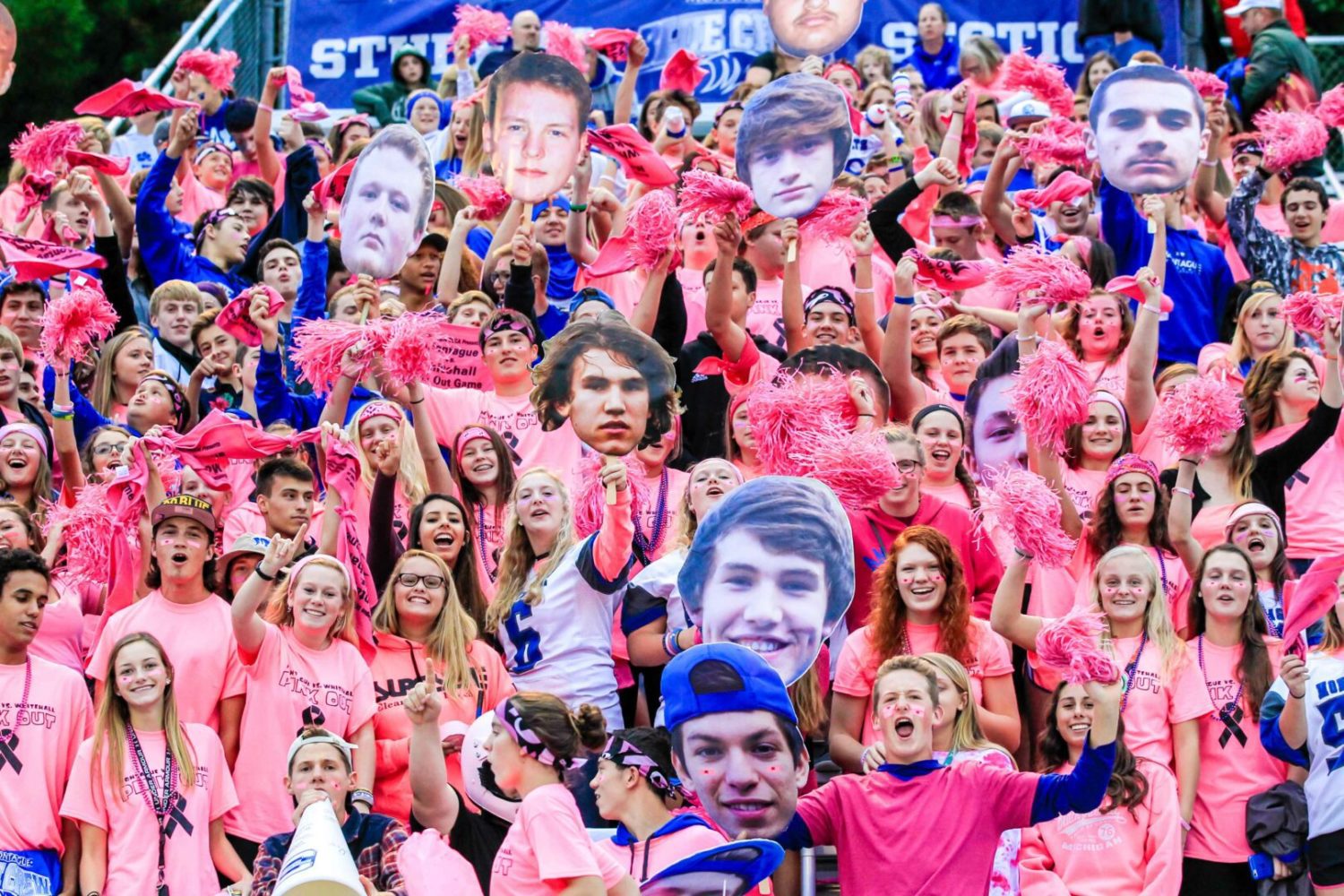