Big Reds respond to a challenge from East Grand Rapids, pull out a 28-10 win

MUSKEGON – Muskegon football coach Shane Fairfield summed up Friday night’s playoff victory when he talked to his team after the game.

“It’s not about running clocks or blowing people out,” the coach said.

That line was particularly relevant for the Big Reds, who have won most of their games by very large margins this season. But in the playoffs even great teams get pushed, and winners respond appropriately. 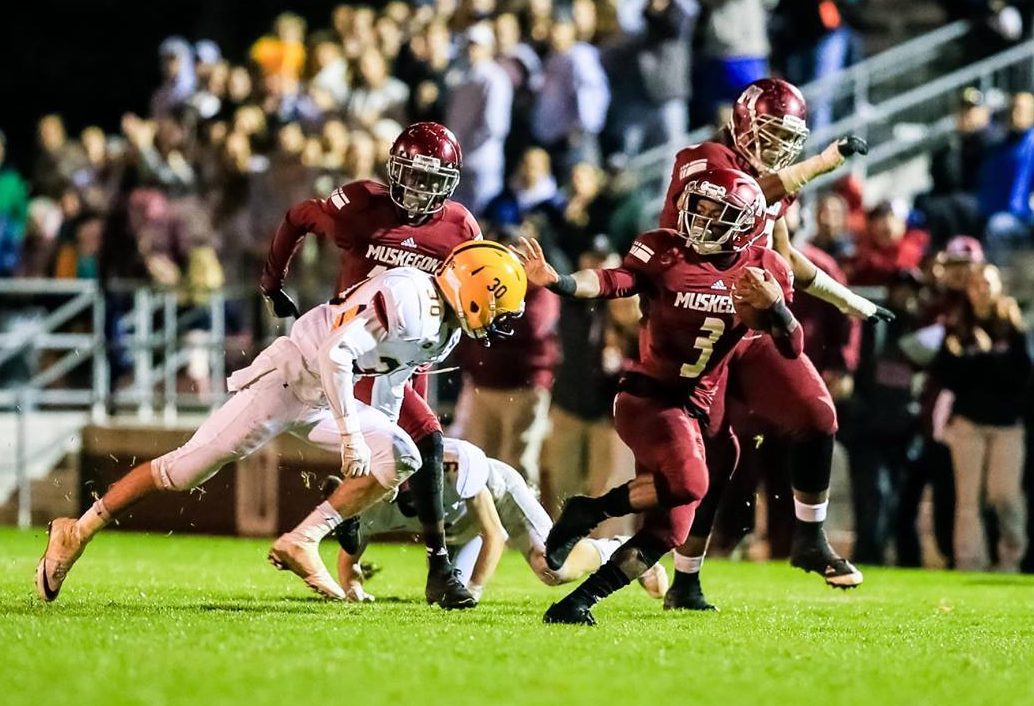 The Big Reds proved they can handle a little pressure by overcoming a first-quarter deficit, and some tight situations in the second half, to defeat East Grand Rapids 28-10 in front of a big crowd at Hackley Stadium in a Division 3 district championship game.

The victory puts Muskegon halfway to clinching a visit to Detroit’s Ford Field for the state finals. The Big Reds, now 10-1 on the season, have two playoff wins under their belts, with the state quarterfinals coming up next week at home against Bryon Center.

“We only had the ball four or five plays in first quarter – those things are going to happen.,” said Fairfield, who added that next week’s game will probably be Friday night at 7 p.m. “As long as you have one more point at the end. (East Grand Rapids) is a great football team that played its heart out.

“I’m happy that our kids understand that they don’t have to score 60 points to feel good about themselves. We have to be able to know we can win the close ones. If you think you’re going to score 60 on everybody in the playoffs, you’re fooling yourselves.”

Fairfield said the Big Reds would not be overconfident next week against Byron Center, a team they whipped 49-14 earlier in the season. Byron Center advanced on Friday by beating Grand Rapids Christian 55-28.

“Not after they blew out Grand Rapids Christian,” Fairfield said. “They’ve been scoring a lot of points since we played them.”

The biggest hero for the Big Reds was junior quarterback La’darius Jefferson, who had three rushing touchdowns, including a 2-yard run and a 38-yard burst in the second quarter, and an 11-yard TD late in the game to sew up the win. 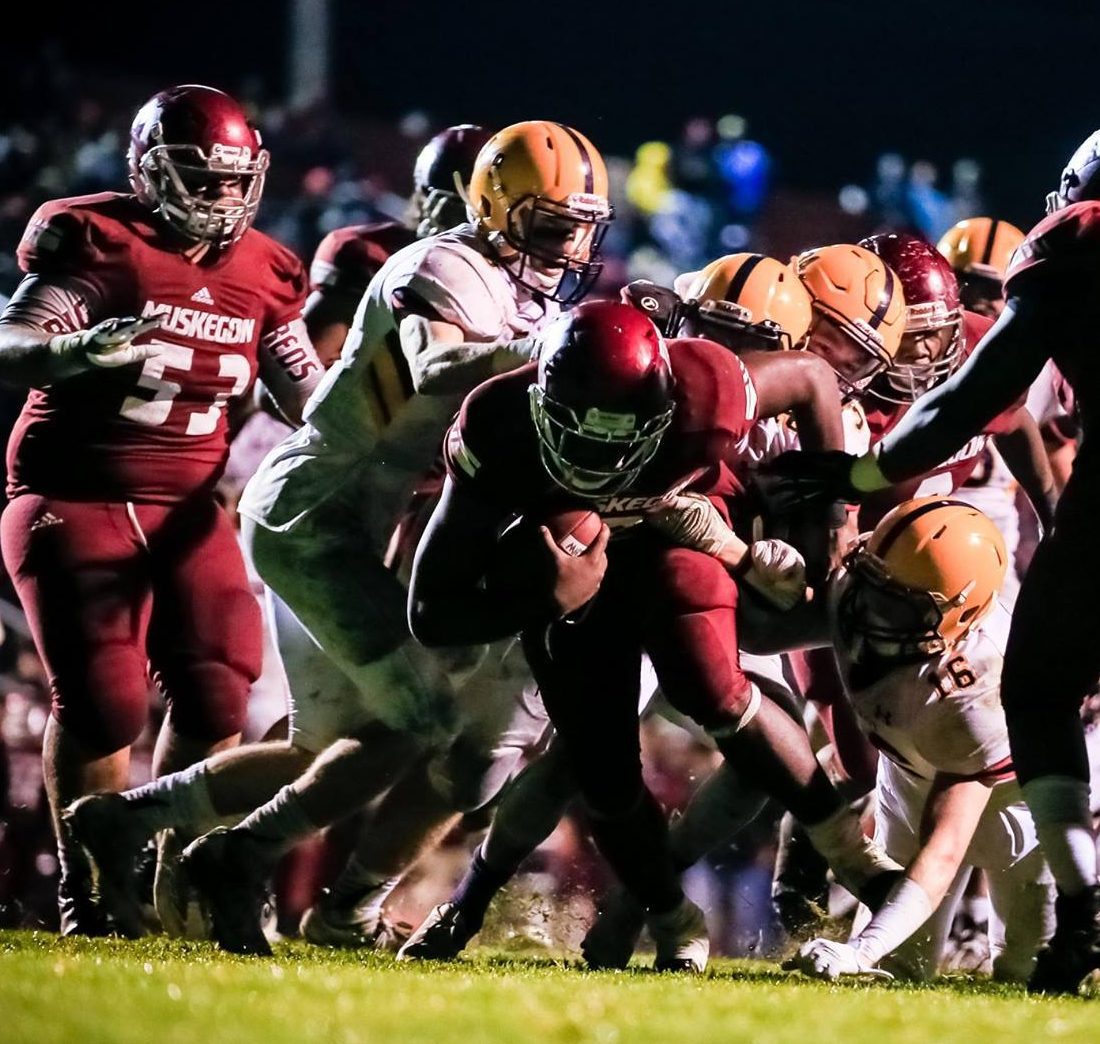 La’darius Jefferson fights his way to the end zone to put Muskegon up 28-10. Photo/Tim Reilly

He finished with 121 yards rushing on 20 carries and completed 5 of 6 passes for 61 yards.

“It was a great test for us to get hit in the mouth, and we responded real good,” Jefferson said. “I’m playing with a lot of confidence now. The coaches told me I had to buy into the system, which I wasn’t doing earlier in the season, but now I am and we’re doing great things. It’s fun to be winning.”

East Grand Rapids opened the scoring with a 35-yard field goal from Joe Bolea in the first quarter.

The Pioneers threatened to extend their lead early in the second quarter when they drove to the Muskegon 28-yard line. But the Big Reds got a defensive stop on fourth down, got the ball back and drove downfield, leading to a two-yard touchdown run by Jefferson.

Jefferson added a 38-yard touchdown run in the second quarter to give the Big Reds a 14-3 halftime lead.

The Pioneers narrowed their deficit to 14-10 with a 26-yard touchdown run by Hub Hejna on their first possession of the third quarter.

But Muskegon responded on its next play from scrimmage when Pimpleton broke tackles, weaved through traffic and raced up the sideline for a 63-yard touchdown. The extra point gave the Big Reds a more comfortable 21-10 lead.

East Grand Rapids threatened to make things interesting again when it drove to the Muskegon 26 in the fourth quarter, but the Big Red defense ended the threat with a fourth-down sack.

Muskegon then put together a sustained drive that culminated in a game-clinching 11-yard touchdown run by Jefferson with 2:30 remaining. 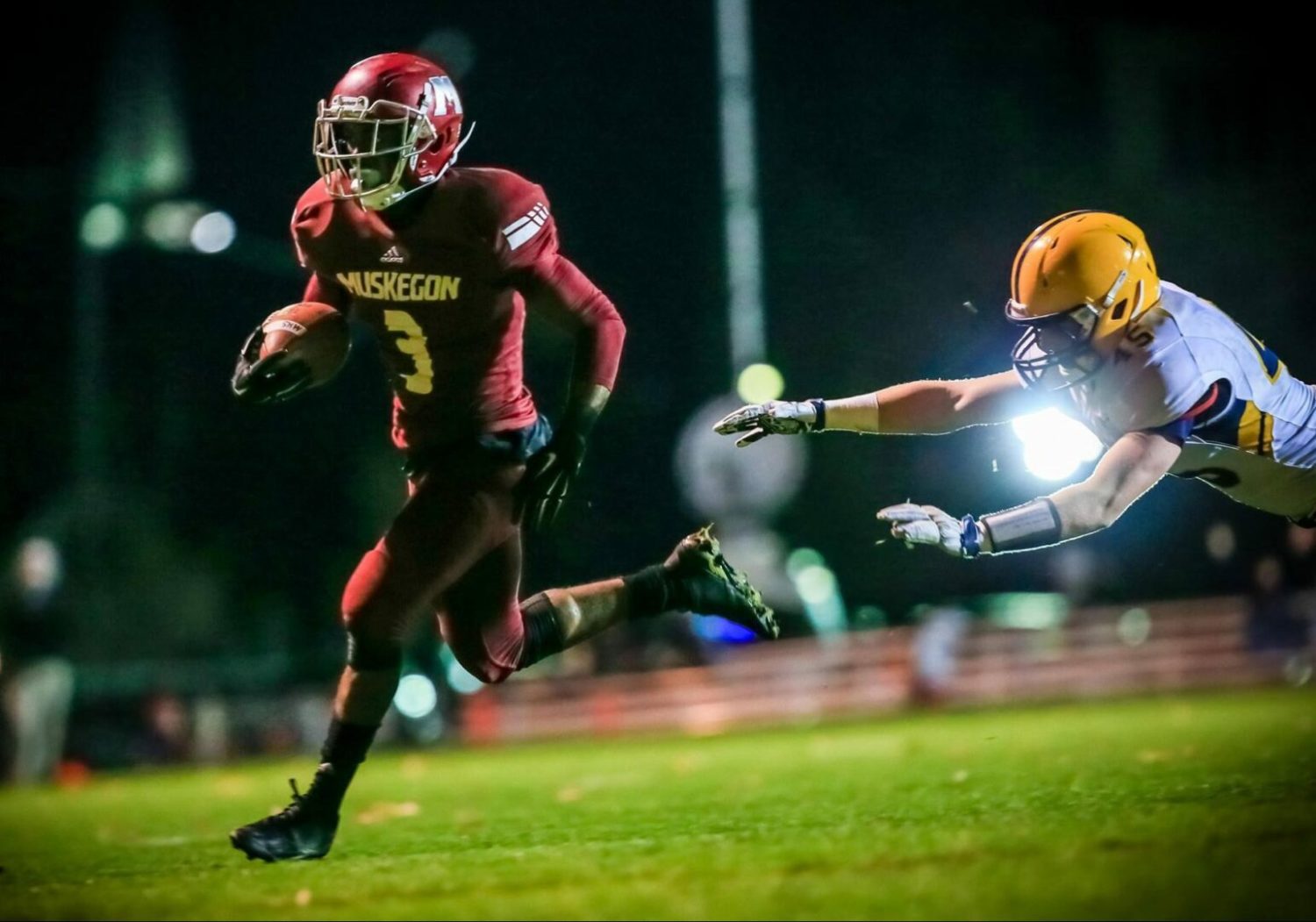 Kalil Pimpleton rushes toward the end zone for Muskegon in the second quarter. Photo/Tim Reilly 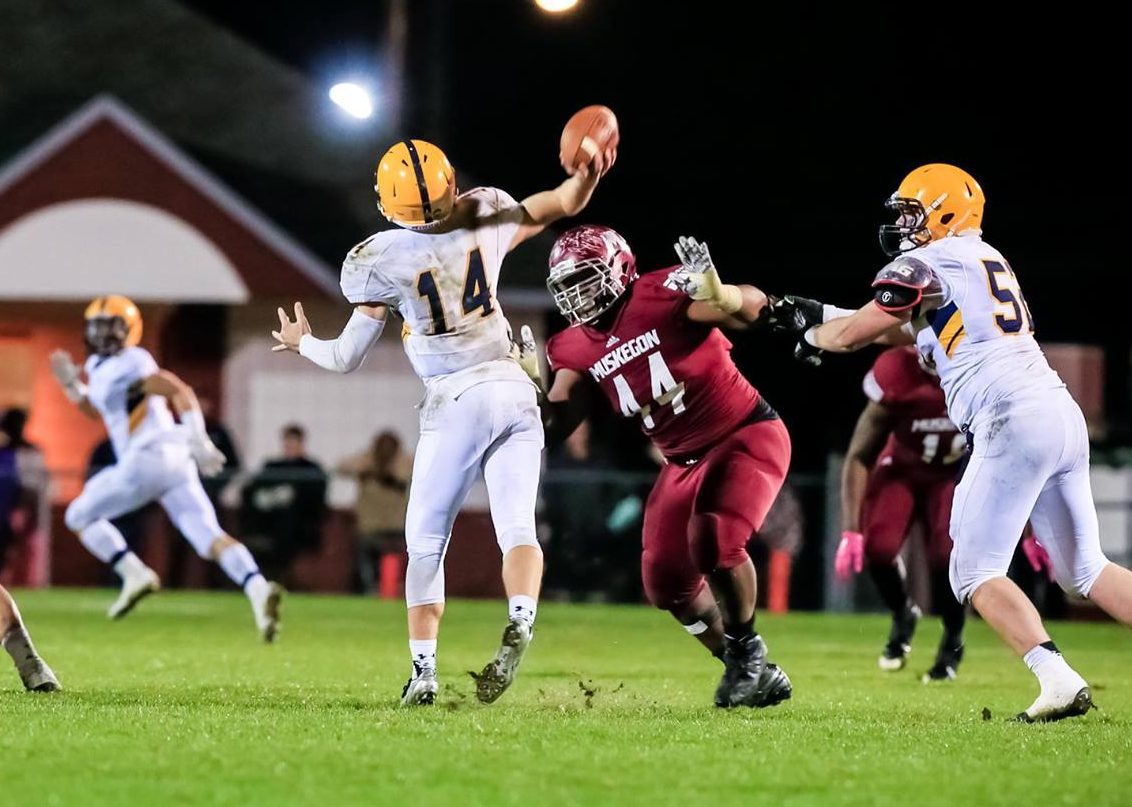 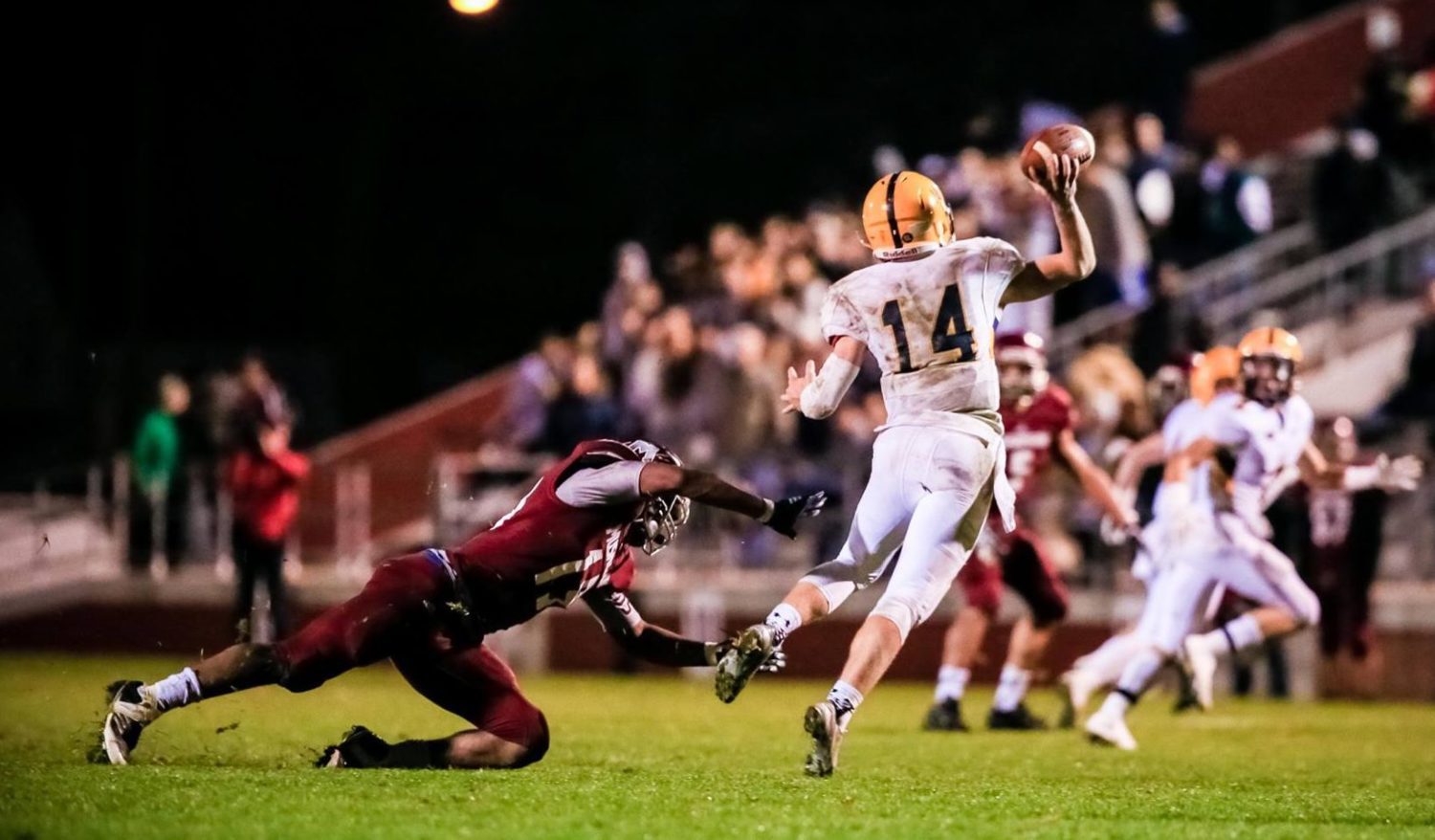 No. 20 Lonnie Clark Jr. breaks a run out for Muskegon. Photo/Tim Reilly

Get a Sport Clips haircut … and free tickets for a Muskegon Clippers game!