MUSKEGON – On their opening night on Friday, the Muskegon Risers rallied from a three-goal deficit to earn a tie.

That was pretty impressive for a team playing its very first game in the Premier Indoor Soccer League.

But the Risers are obviously capable of much more.

They demonstrated that on Saturday with an impressive 4-0 victory over the Youngstown Nighthawks in front of approximately 1,700 fans at L. C. Walker Arena.

It was the first indoor victory in the history of the franchise, and left everyone wondering how many more they might capture.

“I’m thrilled with the players, how hard they’ve been working, and the City of Muskegon for supporting it,” said Risers Coach Ben Ritsema. “I’m just thrilled we got the win, our first ever win tonight, too.”

The victory was even more special because it was a shutout, which are extremely rare in indoor soccer, where the pace is fast, the intensity is high and goals are quite common. 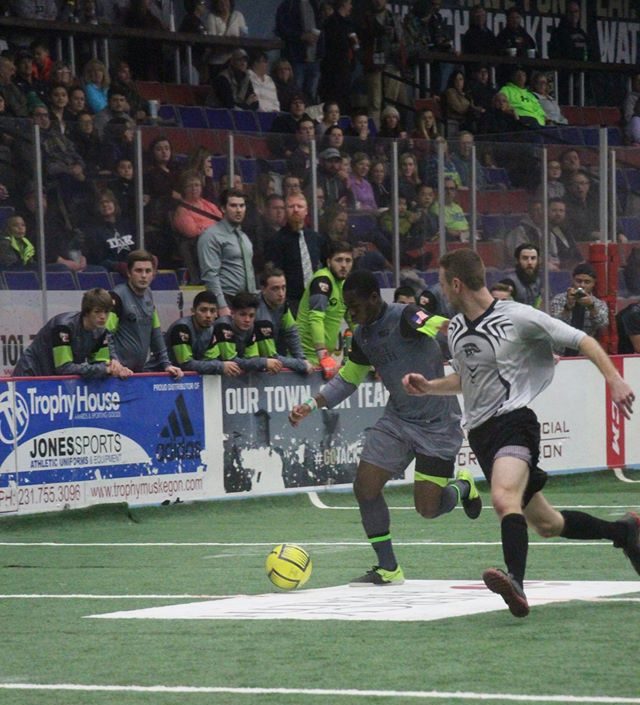 TJ Ifaturoti brings the ball up the turf for the Risers. Photo/Jason Goorman

“It could be years and years before we get another one (shutout),” Ritsema said. “We got lucky, they missed some shots they probably should have put in. We got much more organized in the back the second half of Friday night’s game, and that carried over into tonight.

“I was pretty happy about our defense, and our goalkeeping was really good.”

The first period was scoreless. Muskegon took a 1-0 lead just 1:13 into the second when Jubenal Rodriguez was alone in the corner on right wing and centered to a waiting Miguel Flores, who blasted the shot past the Youngstown goalkeeper.

The goal was Flores’ team-leading third in two games.

Just over four minutes later, with 9:31 remaining in the first half, team captain Stu Collins launched a shot from 15 yards out into the back of the Nighthawks’ net to put Muskegon up 2-0.

The goal was nice, but Collins is a defenseman who prides himself on protecting his own net. He said he was more proud of the shutout than he was about his own goal.

“Scoring is irrelevant to me,” Collins said. “The biggest thing for me is playing at the back with Bergsma and Charlie (Wick) and Mike (Weber) and the boys who kept the shutout.

“Especially in the indoor format, that’s a really hard thing to do, so I’m very happy with that.”

Muskegon scored again with 2:36 remaining in the first half when TJ Ifaturoti corralled a loose ball and blasted a shot from 10 yards out to give the Risers a 3-0 halftime lead.

Rodriguez finished the scoring midway through the third quarter, after taking a pass from Ifaturoti.

After the game, Collins said he was impressed with the crowd at the arena, particularly all the young fans who showed up for the contest.

“We’re just trying to create an atmosphere for kids to get infatuated by all this,” Collins said. “We want to create passion for the game in the next generation.”