Back on the college court: Ricarri Stimage leading MCC to another great season

MUSKEGON – The Muskegon Community College men’s basketball team had to find some quality players to fill some big shoes this season, after losing a lot of talent from last year’s outstanding squad.

One of those players – Ricarri Stimage – was not a typical recruit. 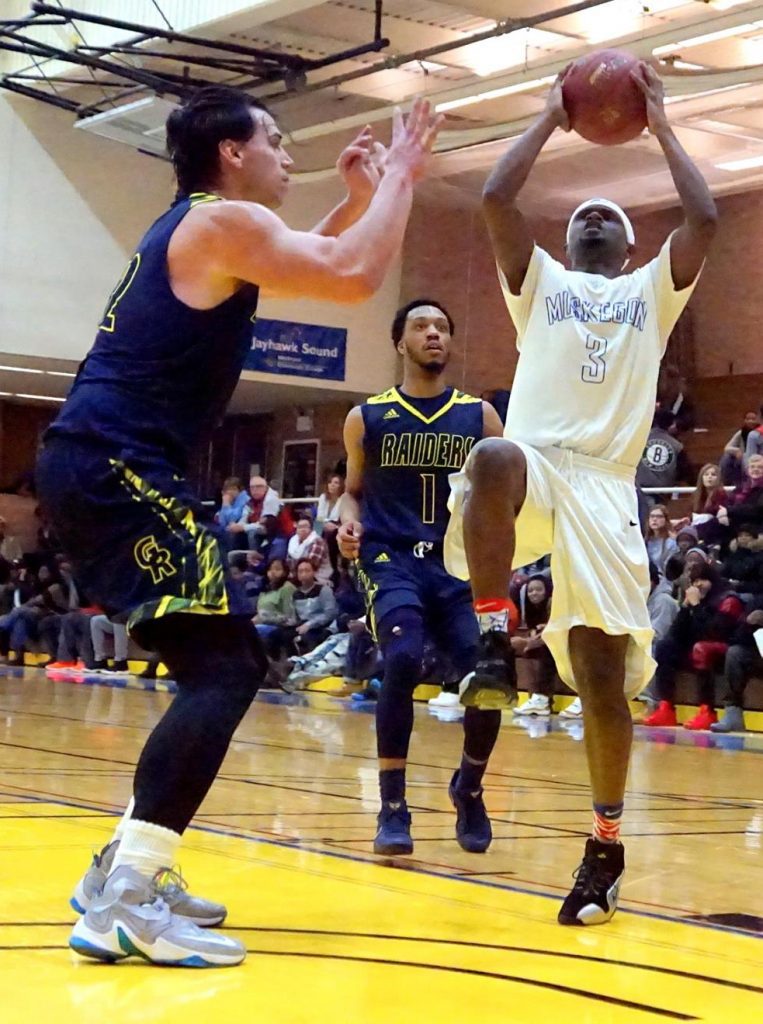 Stimage goes up for a layup for MCC. Photo/Leo Valdez

After two previous starts in college basketball, the 25-year-old Muskegon Heights graduate has become a spark plug for MCC, which will continue its push for a conference championship when it hosts Mid-Michigan Community College Wednesday at 7:30 p.m.

Stimage initially signed to play at Ferris State University after his All-State senior season of high school basketball in 2009. But he only lasted one year with the Bulldogs.

“I was young and made young decisions,” he said. “A lot of bad decisions.”

Stimage came home and played for Muskegon Community College in 2011, but said he still had some growing up to do.

“We struggled that season, just finished barely above .500, and after the season ended, I pretty much quit going to classes,” he said. “Again, I was just making some bad choices.”

Stimage took a couple years off from college and basketball, but recently became motivated to get his career rolling again, with some encouragement from his family.

“My younger brother, Kalil, is in eighth grade and is one of the top prospects in basketball in the state,” he said. “I wanted to show him that I could still get back into the game.”

When Stimage ran into MCC assistant coach Jimmy Booth at a Gus Macker 3-on-3 tournament last summer, he asked about the possibility of returning to the program. 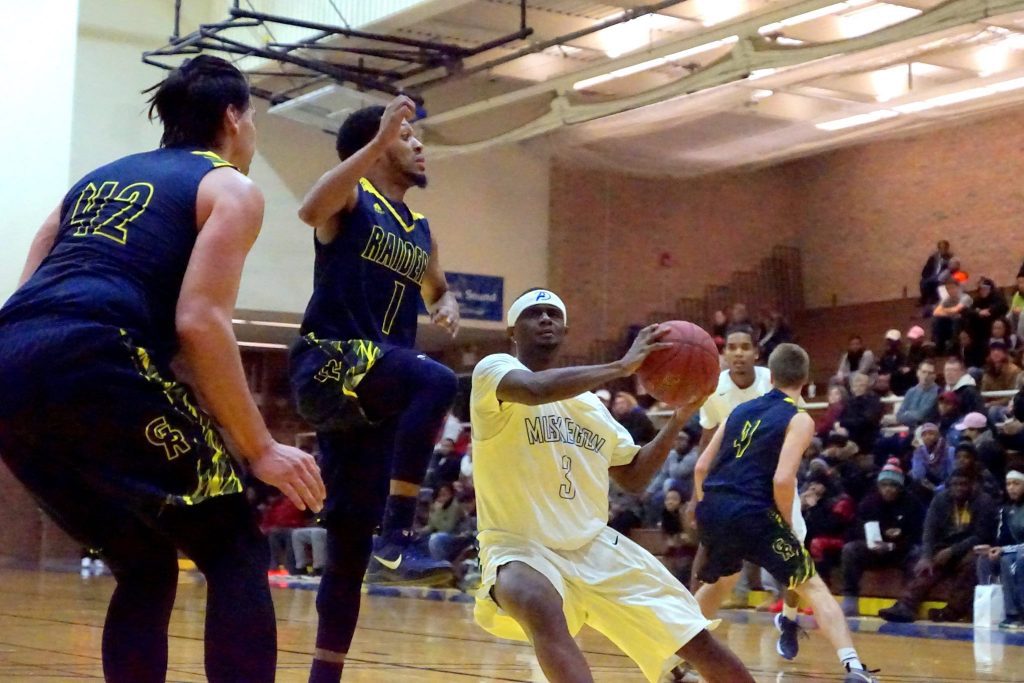 Stimage cuts through the lane and gets ready to go up for a layup in traffic. Photo/Leo Valdez

Booth directed him to MCC head coach Dave Schlump, who took him back on the team. It turned out to be a great move for the player and the Jayhawks.

Stimage has become the dynamic point guard for MCC, which is 18-5 overall and 12-2 in the Michigan Community College Athletic Association’s Western Conference. The Jayhawks are currently tied with Lansing Community College for first place in the conference.

MCC has already clinched a berth in the National Junior College Athletic Association Midwest regional tournament at the end of the regular season. But the Jayhawks are gunning for a regular-season conference championship, which would give them an opening-round bye in regionals.

Stimage is averaging 13.3 points per game. He is more than capable of taking the ball to the hoop when necessary, like he did in a key battle at Lansing Community College on Feb. 11.

With just 4.3 seconds left and the game tied 84-84, Stimage drove to the rim and was fouled. He sank one free throw to give the Jayhawks a huge 85-84 victory.

But Stimage says he’s just as happy distributing the ball to teammates.

“I love it as a point guard,” he said. “I can go the whole game without shooting, because there’s so many great players around me. Coach has got us all on the same page. Nobody is trying to be selfish.”

Stimage’s playmaking abilities have been a perfect fit for the Jayhawks, who feature any number of talented scorers in the lineup.

Kyle Ervin Jr., a 6-7, 230-pound forward from Detroit, leads the Jayhawks in scoring at 21 points per game, but freshman Sergio Diaz (14.4 ppg), Michael Williams (11.9) and Stimage are capable of leading the team in scoring on any given night.

Earlier in the year, MCC had three players record double-doubles in the same game, and Sergio Diaz was one rebound shy of making it four.

“I’ve been around the game 32 years, and I don’t think I’ve ever seen stats like that in a single game,” Schlump said.

The Jayhawks are blessed to have so much talent, after losing so much to graduation.

“You look at all the talented kids that we lost a year ago, from Eddie Tornes, to Marcus Tumblin, and Will Roberson, and to think we’d have the kind of run that we’re turning in now, I probably wouldn’t have expected it,” said Schlump, who’s in his eighth year at MCC.

“But we turned in a really good recruiting effort that brought some quality kids to our program, and that’s helped us re-tool this roster.”