MUSKEGON- The Muskegon Clippers allowed 18 runs in their opening day loss on Tuesday against Grand River, and needed someone to cool off the Loggers on Wednesday.

Ashcraft’s eight-inning performance allowed the Clippers to get even with Grand River with a 3-2 victory at Marsh Field.

The Clippers are now 1-1 on the season, good for a second-place tie in the Great Lakes Summer Collegiate League’s Northern Division.

“I didn’t know I was going to start until this afternoon,” Ashcraft, a right-hander from Grand Valley State University, said after the game. “They wanted a pitcher to mix some speeds, and I had to go out there and help save the bullpen. 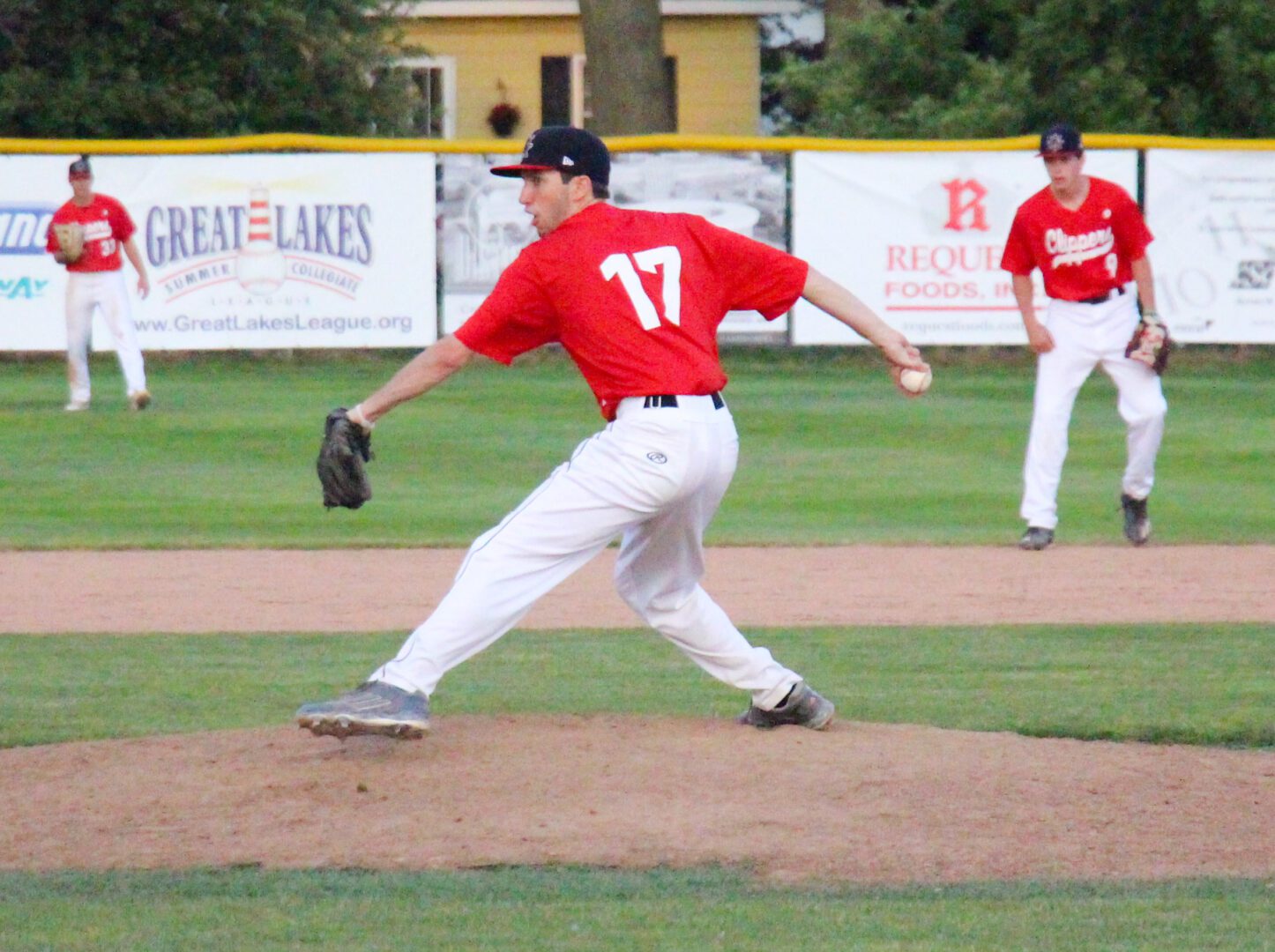 “It is special to get the first win. It feels good. I was confident with my stuff and the defense behind me.”

Ashcraft allowed two runs on seven hits while striking out one batter and walking two.

“Mitch Ashcraft was just outstanding,” said Clippers Manager Walt Gawkowski, whose team was forced to use four pitchers in Tuesday’s season opener. “Our bullpen is really stretched right now, we needed a long outing from our starter, and he gave it to us.

“Mitch has the perfect makeup. He just takes the ball and competes. It was a big win and I am really happy to bounce back after last night.”

The game remained scoreless through three innings, with each team mustering just one hit apiece.

The Clippers broke the scoreless tie in the fourth with a leadoff single by Bryce Kelley, followed by a two-run home run from Ryan Blake-Jones.

Blake-Jones’ home run was his second of the season. 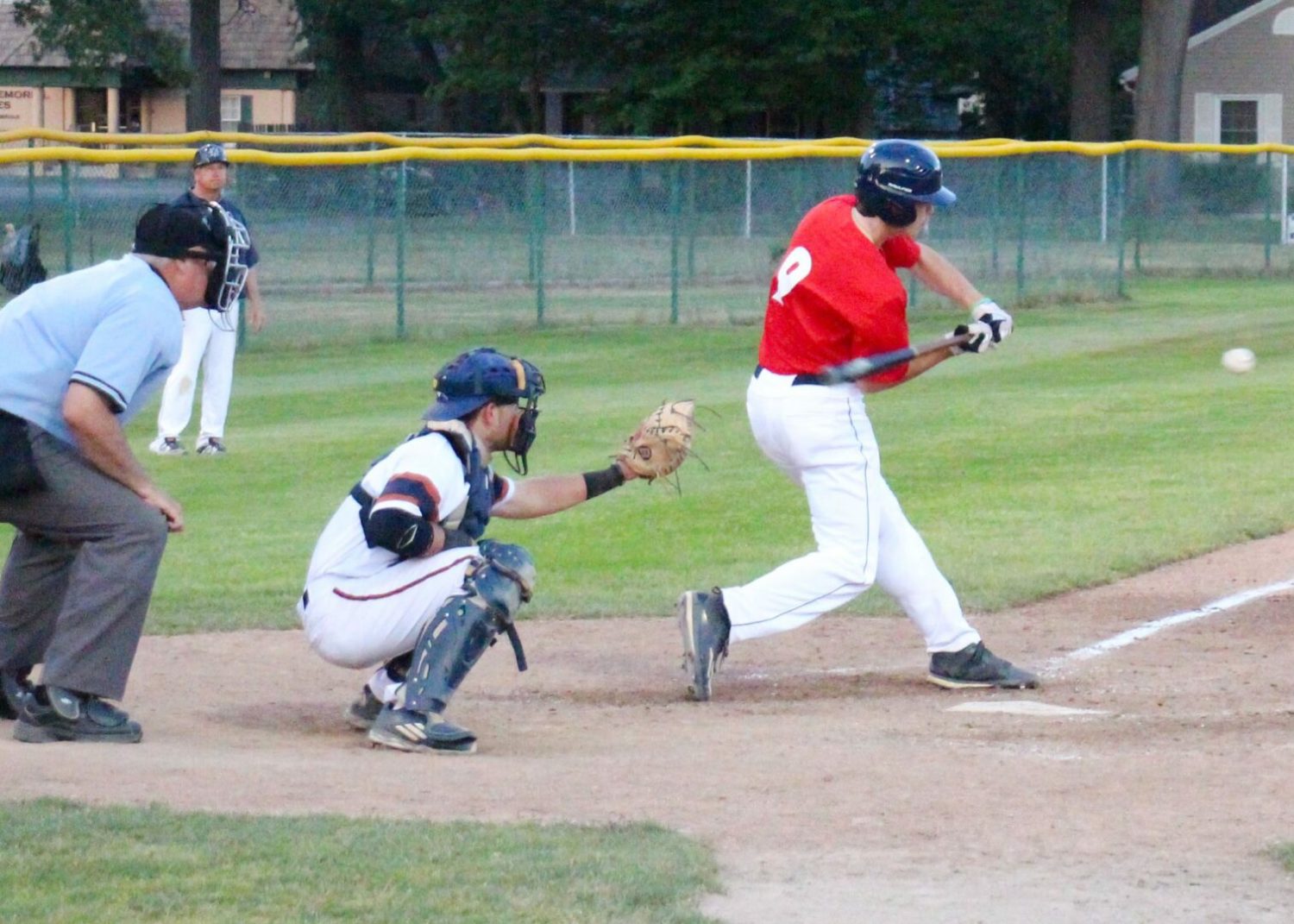 Reed Adams takes a swing at a pitch for the Clippers. Photo/Jason Goorman

“Ryan has been swinging it really good,” Gawkowski said. “He has tremendous pop in his bat and when he squares it up, it’s fun to watch.”

The Loggers cut their deficit to 2-1 in the bottom of the fifth, scoring on a double play with runners at the corners and nobody out.

Grand River tied the game 2-2 in the sixth on a two-out RBI single from Bryce Leasure that scored Zach Leone.

Muskegon quickly regained its lead in the top of the seventh.

Connor Henderson opened the inning with a single, then stole second base with one out.

Jacob Buchberger, a Montague graduate, knocked in Henderson with a single to give the Clippers a 3-2 lead.

Kelley, who played for Michigan State this spring, got the save om the mound for Muskegon. He struck out Loggers’ shortstop Jason Cryar with runners on first and second base with two outs in the ninth.

The Clippers were led offensively by Kelley and Blake-Jones with two hits apiece while Buchberger and Henderson added one. 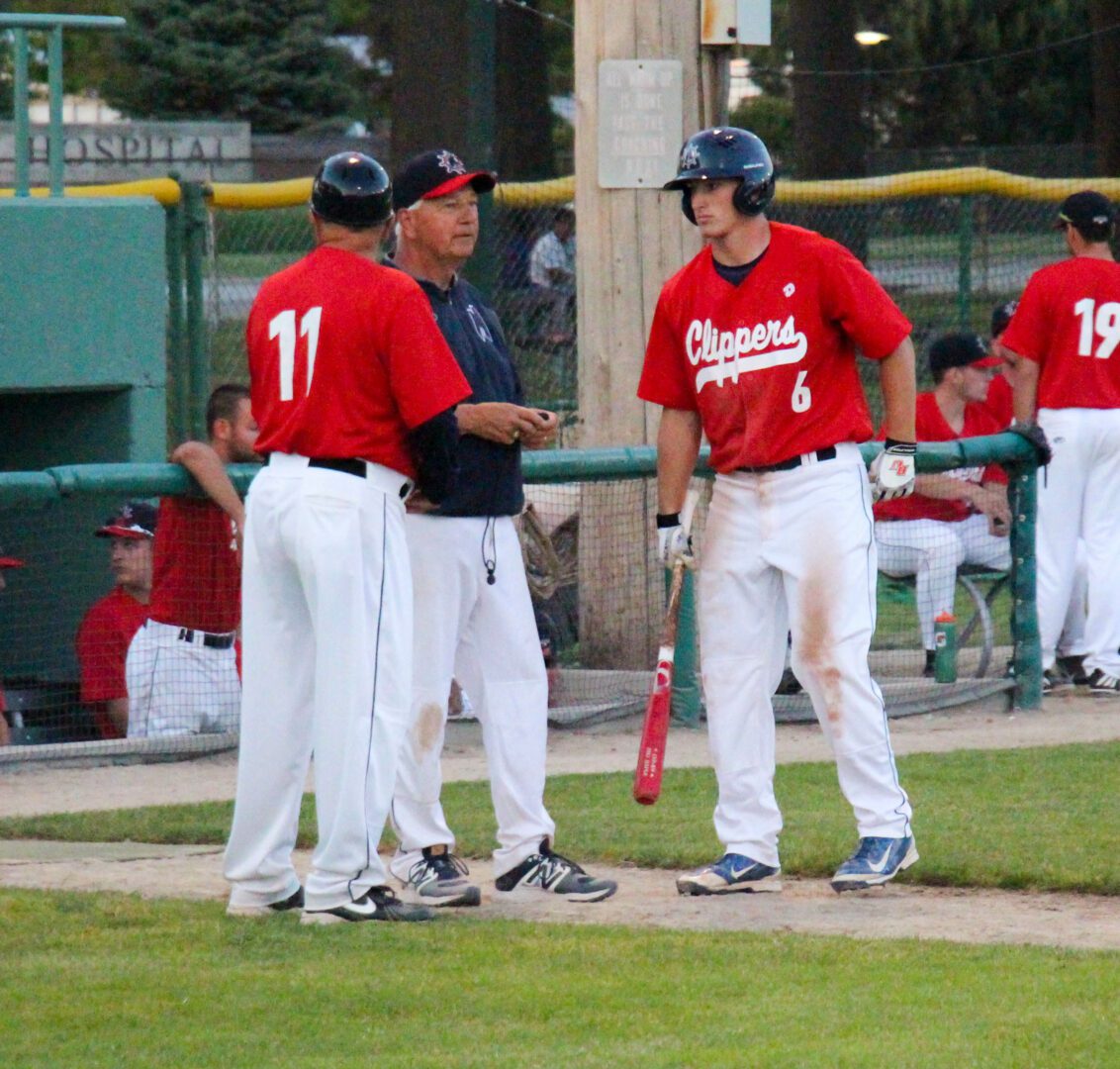 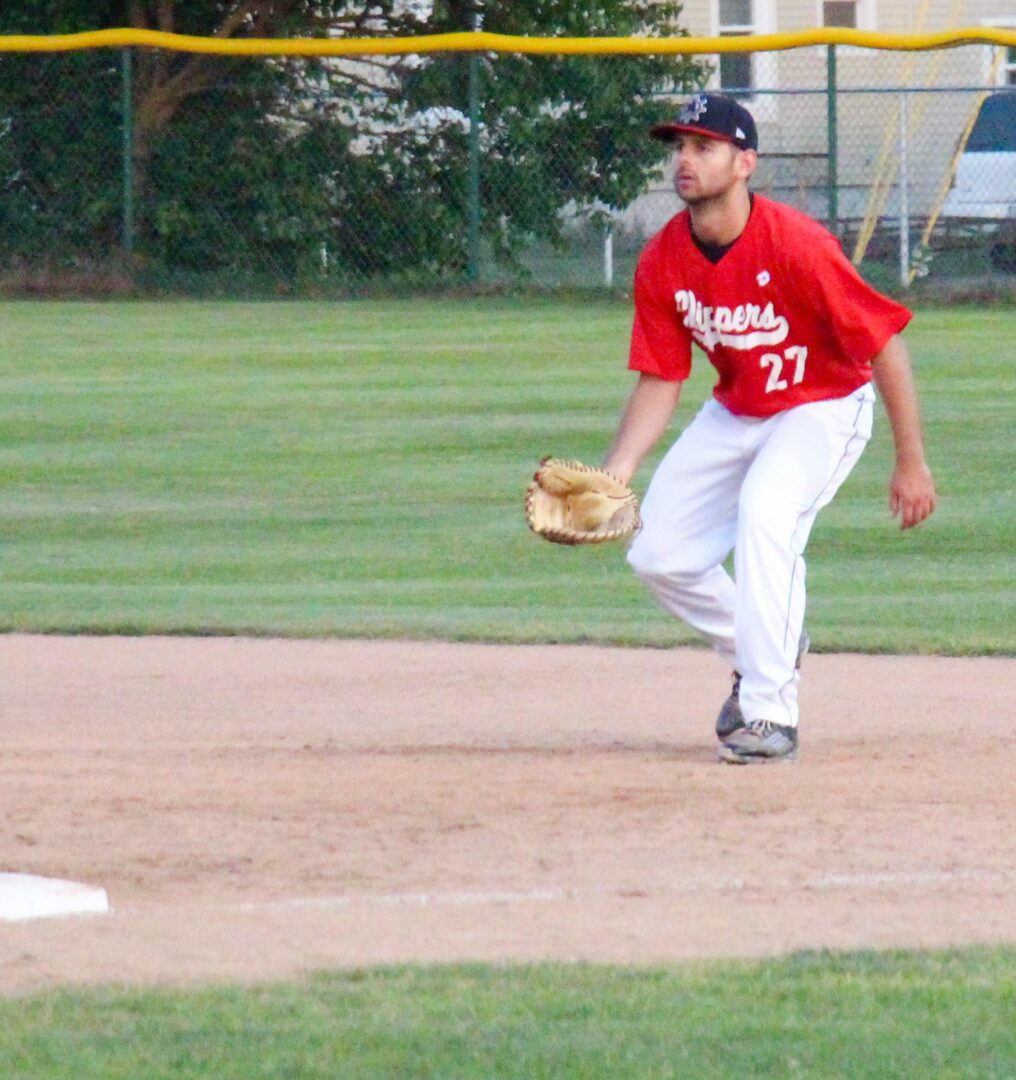 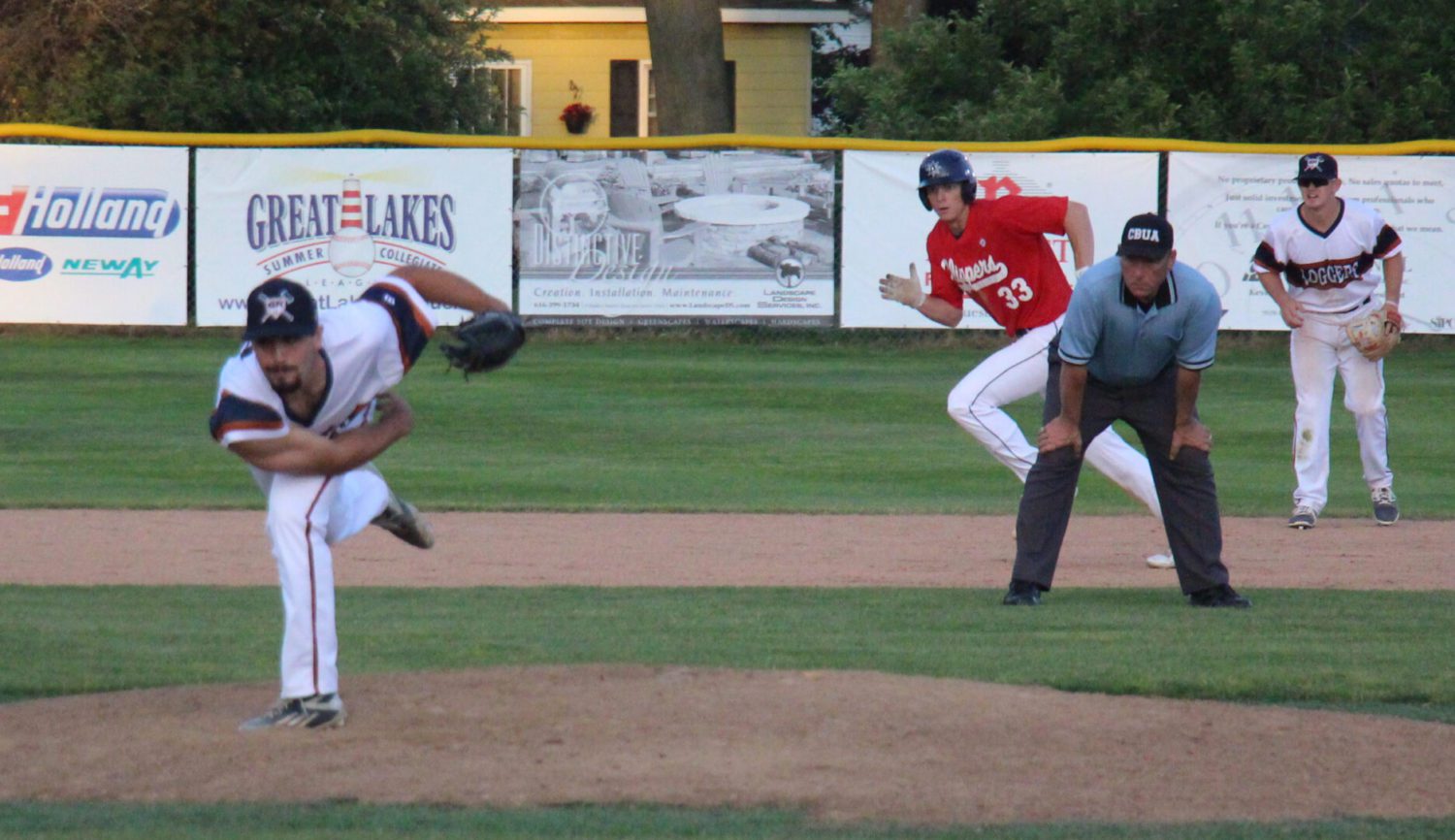 Muskegon’s No. 33 Bryce Kelley runs towards third base after the pitch to home plate. Photo/Jason Goorman