Evan Moskwa, the new kid at QB for R-P, has the Rockets roaring with a 2-0 start

team entered the 2017 season with a big question mark at the quarterback position.

But that question has been answered quickly by Evan Moskwa, a sophomore who has stepped into the signal-caller role like a seasoned veteran.

Moskwa has already rushed for 248 yards and five touchdowns on 19 carries, while also throwing for 298 yards and two touchdowns.

He has played a very big role in Reeths-Puffer’s promising 2-0 start to the season, which includes non-conference victories over Grand Haven (28-10) and Orchard View (49-21).

The Rockets will try to keep their perfect record intact when they visit Grand Rapids Union on Friday night in their first O-K Black Conference game of the season.

Some might suspect that the Reeths-Puffer coaches knew exactly what they were getting in Moskwa, and planned to make him the new starting quarterback all along.

But they insist that was not the case. He had to compete for the position, and was only named the starter after proving himself in live action. 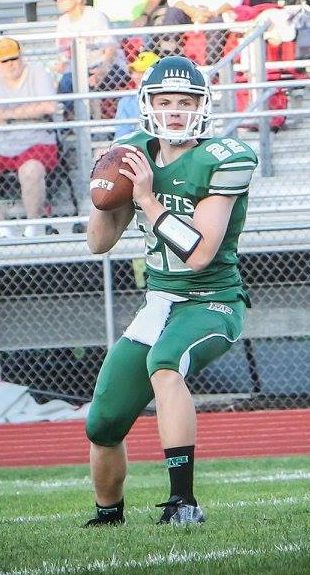 Evan Moskwa, in action against Orchard View last week, is off to a great start in his sophomore season. Photo/Joe Lane

“We didn’t make the decision until after our scrimmage,” said Reeths-Puffer head coach Kyle Jewett, who added that he wanted to see how Moskwa would perform while being hit. “It was one thing for him to do well in non-contact 7-on-7’s during the summer, but it’s a completely different thing when you’re carrying the ball and getting hit.”

Jewett learned a lot about Moskwa’s work ethic over the summer, and believes it helped the young quarterback reach his goal of being the starter.

“He knew he’d be competing for the spot,” said Jewett. “He’s very committed in the weight room and was always at 6 a.m. workouts. He made sure every rep was valuable and meant something. which brought him closer to his goal.”

While many teens prefer to sleep in, particularly during the summer, Moskwa said he never felt the temptation to miss an early-morning workout.

“I knew if I went in and put in the time that it would pay off,” he said. “I never struggled to go (to morning workouts), because I figured if I put all my hard work and effort in, there was no reason I shouldn’t be the quarterback.” 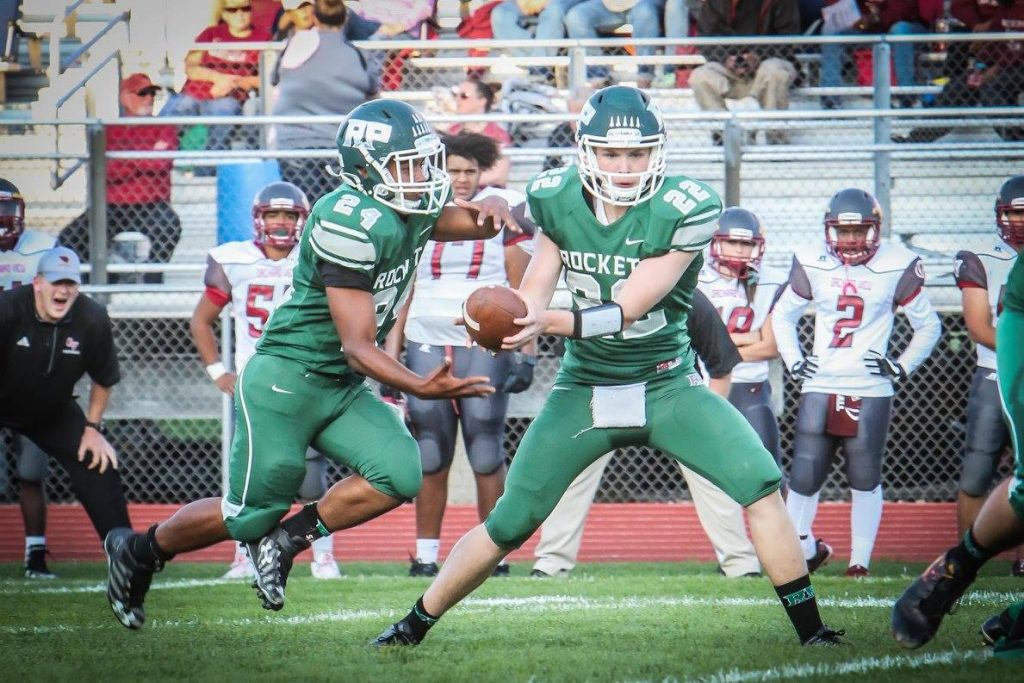 Moskwa prepares to hand the ball off to Trent Kovalcik. Photo/Joe Lane

“I thought about it since eighth grade because I knew that Blake (Ross) was going to be a senior the year I was a freshman, so someone had to be the starter this year,” he said. “Ever since then, I’ve worked hard to become the starter.”

Moskwa and the Rockets are extremely eager to turn their 2-0 start into a postseason berth. Reeths-Puffer needs four more wins to make the playoffs for the first time since 2013.

Getting back to the playoffs won’t be easy, with opponents like Mona Shores and Muskegon on the horizon, but the Rockets are not afraid of putting in the hard work necessary to achieve their goal.

“I think we’re doing really good so far,” Moskwa said. “A lot of people have doubted us because of the last few years, but I think we can really turn it around and make the playoffs, which would be really great for us.

“I’m just thankful our offensive line makes great holes, and I only have to break one tackle to get to the end zone. But it’s not just our offense, it’s also our defense, because without them we couldn’t score. They’re doing a great job of getting the ball back.”

WMC girls get hot in the second half, roll past Muskegon Catholic 60-36