I’m back, folks. I figured I would be soon.

I was the Week 5 winner of the LSJ Editors Gridiron Picks competition, just like I was in Week 1.

I tied Nate Thompson for the top spot with a 13-2 record, then won in a tie-breaker, but I expected to be victorious all along.

Frankly, I think I probably would have won several other weeks, as well, if I hadn’t stubbornly picked against Mona Shores in the first three games of the season.

Sorry for doubting you, Sailors. You certainly demonstrated that you were up to the challenge against 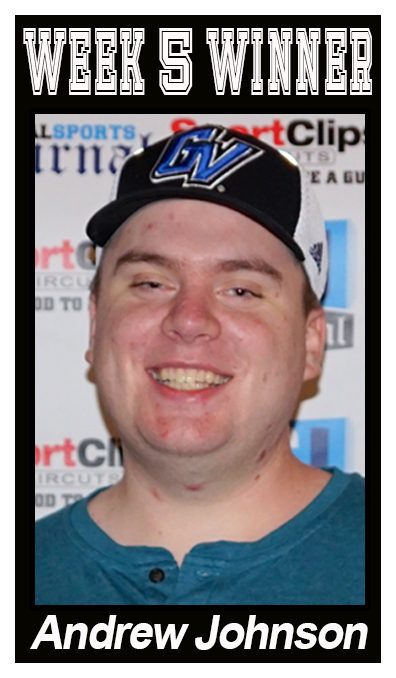 several quality opponents. I kept waiting for you to trip up, and you never did!

Here’s a fun fact for Mona Shores fans: The Sailors scored more points in Week 1, when they played at Michigan Stadium in Ann Arbor (41), than the U-M offense has combined to score in its two home games (21 points, not counting field goals).

Yes, I’m a Spartan fan, if you haven’t guessed by now.

This week, in the LSJ Spotlight Games, I’m expecting the Reeths-Puffer Rockets to put the last two weeks behind them and pick up a crucial road victory at Jenison. The Rockets had to face two of the best teams in Michigan in the last two weeks (Mona Shores and Muskegon), and they didn’t fare well, but I think they will rediscover their winning ways this Friday.

I’m also picking Muskegon Catholic to win on the road at Muskegon Heights in a key Lakes 8 battle. But it might be a better game than most people expect. I think the Tigers have legit talent and will keep the game close for the first three quarters, before championship experience takes over for the Crusaders.

Finally, I think Kent City will knock off Morley-Stanwood in a battle of unbeatens that I will be covering. Both teams are obviously very good, but it’s Homecoming at Kent City, and I think the extra energy from the festivities will give the Eagles an edge.

My thoughts on those three games, and a few others, are obviously not shared by all of my LSJ colleagues. Check out the grid below.

Looking at some of their questionable choices, I’m guessing you’ll be seeing my mug again in this space next week.