Willie Shanks will play college football, but he’s been brilliant in basketball for Big Reds

MUSKEGON – Some of the best and most appropriate nicknames are often provided by one’s family.

Shanks’ head basketball coach, Keith Guy, wasn’t sure how he earned the moniker, but even he calls him “Willie Bo.”

“It came from my great grandfather,” Shanks explained. “He walked into the delivery room after I was born and called me Bo, because he said I looked like a football player. And it just stuck.” 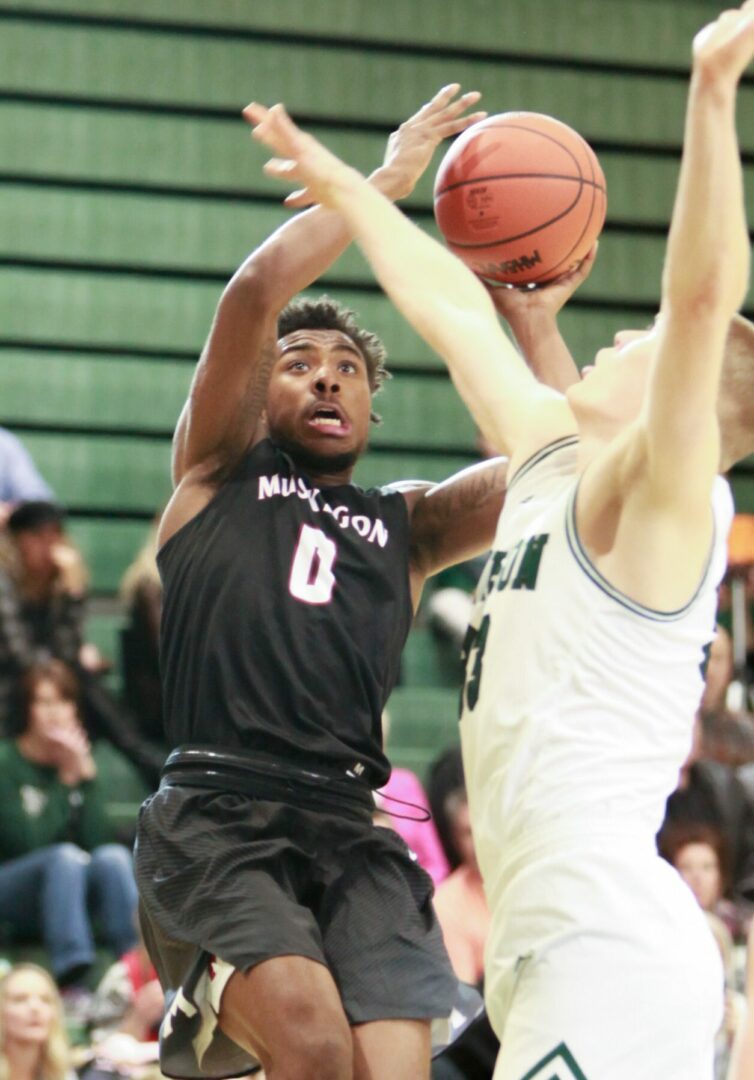 Willie Shanks goes up for a shot off the block for Muskegon in a game against Jenison. Photo/Jason Goorman

Much like the great football and baseball star Bo Jackson, Shanks has developed into a multi-sport standout. That’s not surprising, because different family members have excelled in different sports over the years.

His father, Willie Shanks Sr., excelled on the gridiron at Muskegon Heights, while his mother, Lakera Lakes, starred on the basketball court for the same school.

The apple hasn’t fallen far from the family tree.

The 6-foot-2, 190-pound Shanks was a key figure in the defensive backfield for the Big Reds’ football squad this fall, helping lead the team to a Division 3 state championship.

As a ballhawking cornerback with tremendous athleticism, Shanks grabbed a single-season program-record 10 interceptions and opened the eyes of several college coaches.

Football is the sport he will pursue at the next level. Shanks recently announced that he’ll sign with Division 2 power Ferris State University on National Signing Day on Feb. 7.  The Bulldogs are coached by a familiar face in Muskegon, Tony Annese, who coached the Big Reds from 2000 to 2008, winning three state titles.

“When I went up there to visit, it just felt like a family,” Shanks said. “The way the coaches and players greeted me, it felt real good. And I know I’m going to a program with great coaching. They’ve got a Muskegon coaching legend.” 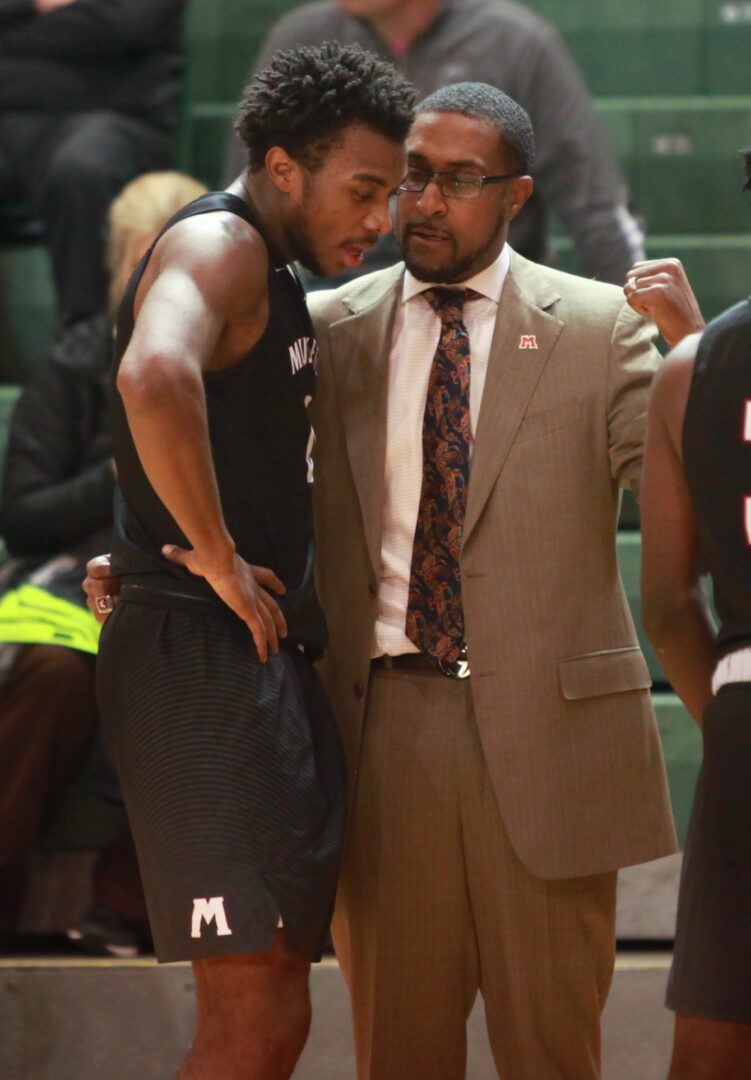 Shanks listens to Coach Keith Guy during a break in the action when the Big Reds topped Jenison in a tight O-K Black matchup. Photo/Jason Goorman

Shanks said he felt he had a better opportunity to excel in football, a sport he started playing at the age of four. But Coach Guy said there’s no doubt Shanks could have also played college basketball.

“No question,” Guy said. “Early on, there were some (college) coaches interested, but they kind of backed off because they figured he’d commit to football. That’s his choice and I want him to be happy. But there’s no doubt he can play at the next level.”

While Shanks will focus on football in the fall, he’s zeroed-in on on basketball at the moment, and he’s provided the spark that the Big Reds have needed since a slow start to the season.

Since a surprising early-season loss to rival Grand Haven on Dec. 19, the Big Reds have lost only two more games, both to larger schools from Chicago Currie and Detroit Cass Tech. Muskegon (9-3 overall) is currently riding a four-game winning streak.

Guy said it took Shanks and the other football players on the basketball team a few weeks to get into basketball shape, but now that their legs are prepared for the 32-minute grind of high school hoops, Shanks and the Big Reds are excelling.

Although he doesn’t label himself as the team’s go-to scorer, Shanks has grown into the role, including an eye-opening 31-point, nine-rebound performance against Jenison on Jan. 23. Last Friday at Mona Shores, Shanks helped break open a four-point game by scoring 17 of his 21 points in the second half, propelling Muskegon to a 63-49 win. 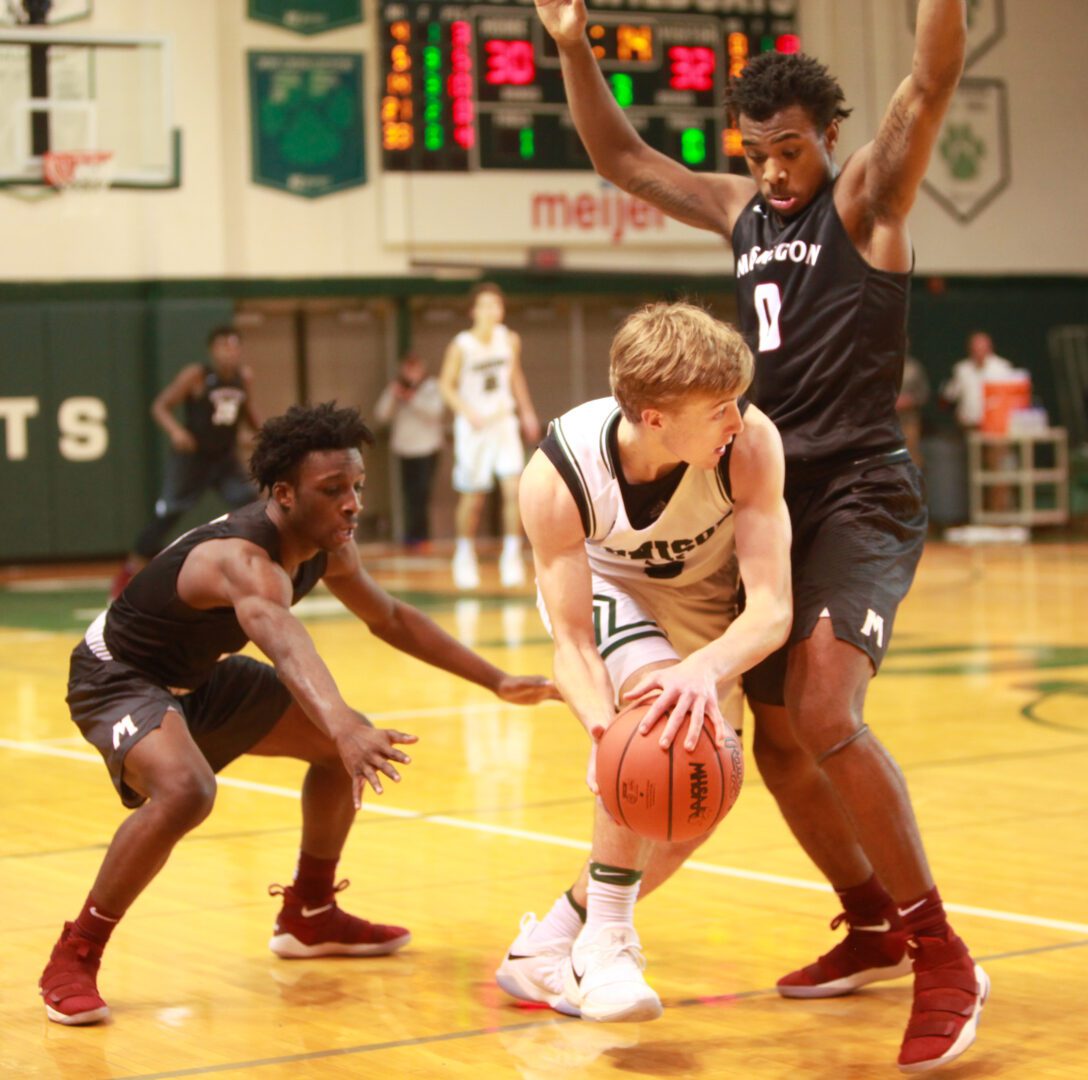 Shanks’ game on the hardwood is similar to his mentality on the football field – constantly in attack mode and playing physical.

“I’m not the best outside shooter, so that’s my game — attacking the rim and trying to get a layup,” Shanks said.

Guy said Shanks’ ferociousness on the court rubs off on his teammates.

“It’s his motor,” Guy said, on labeling his strengths. “He’s an extremely hard worker, he defends very well. And he just wants to win. He’s a fierce competitor. He’ll do whatever it takes to get a win.”

“First we want to win league, but after that, anything is possible,” he said. “I believe in this team so much. Since that early loss (to Grand Haven), we’re so focused and we’re not taking anyone lightly. We’ve going to give everyone our best shot. And we believe we can win a state title. We want to go back-to-back.” 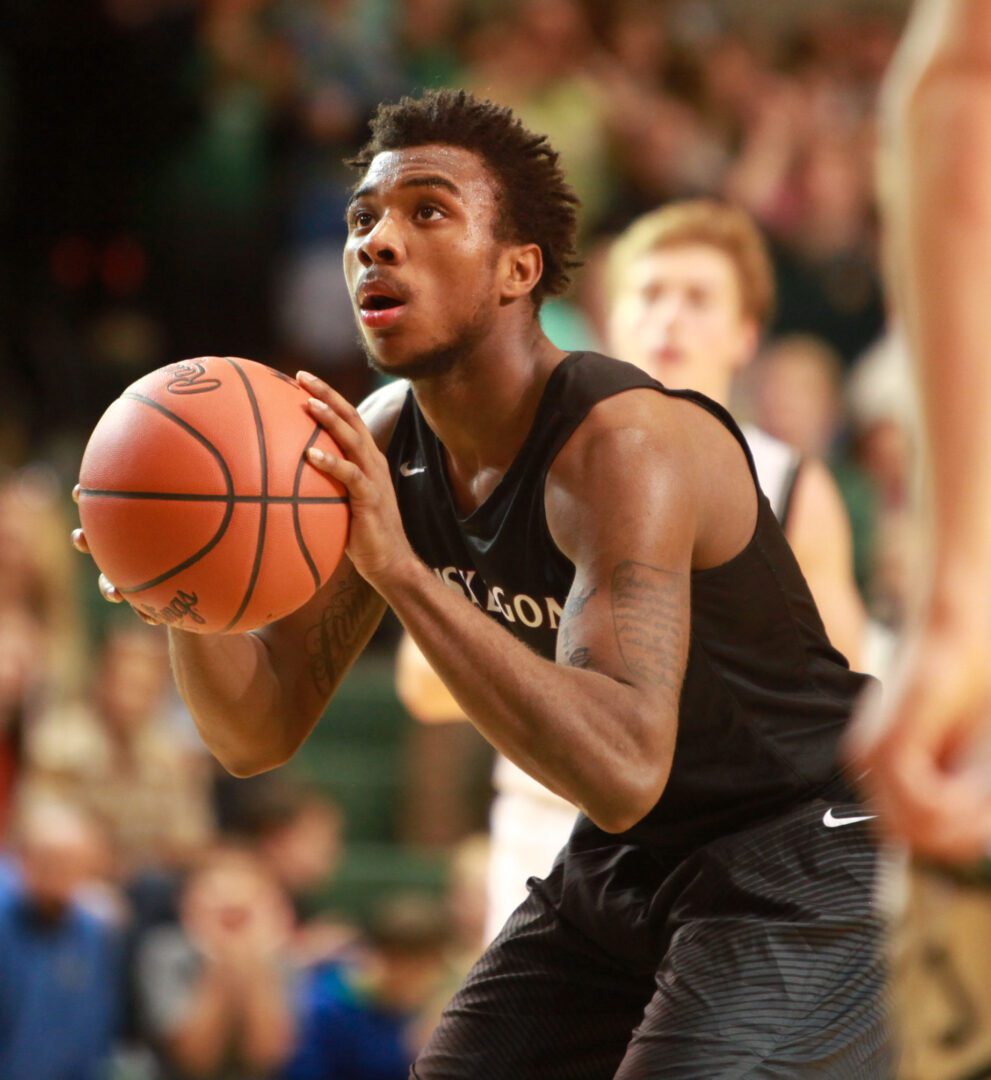 Muskegon’s Willie Shanks Jr. squares up at the free-throw line during Muskegon’s tight win against Jenison on January 23. Photo/Jason Goorman 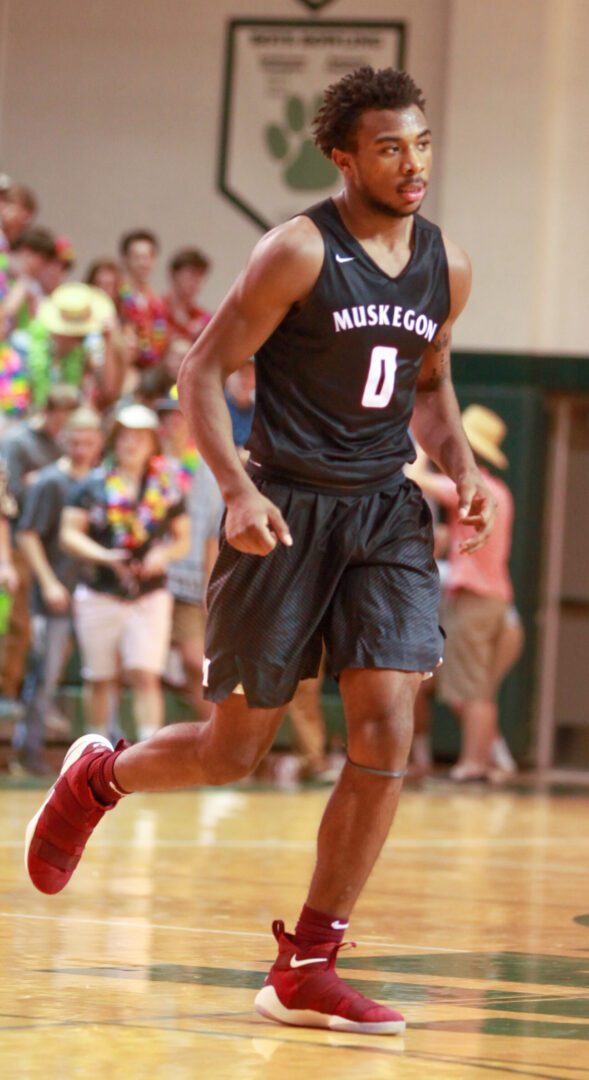 Scoring a season-high 31 points in Muskegon’s win over Jenison on Jan. 23, Muskegon’s Willie Shanks Jr. is a big part of the Big Reds recent success on the basketball court. Photo/Jason Goorman 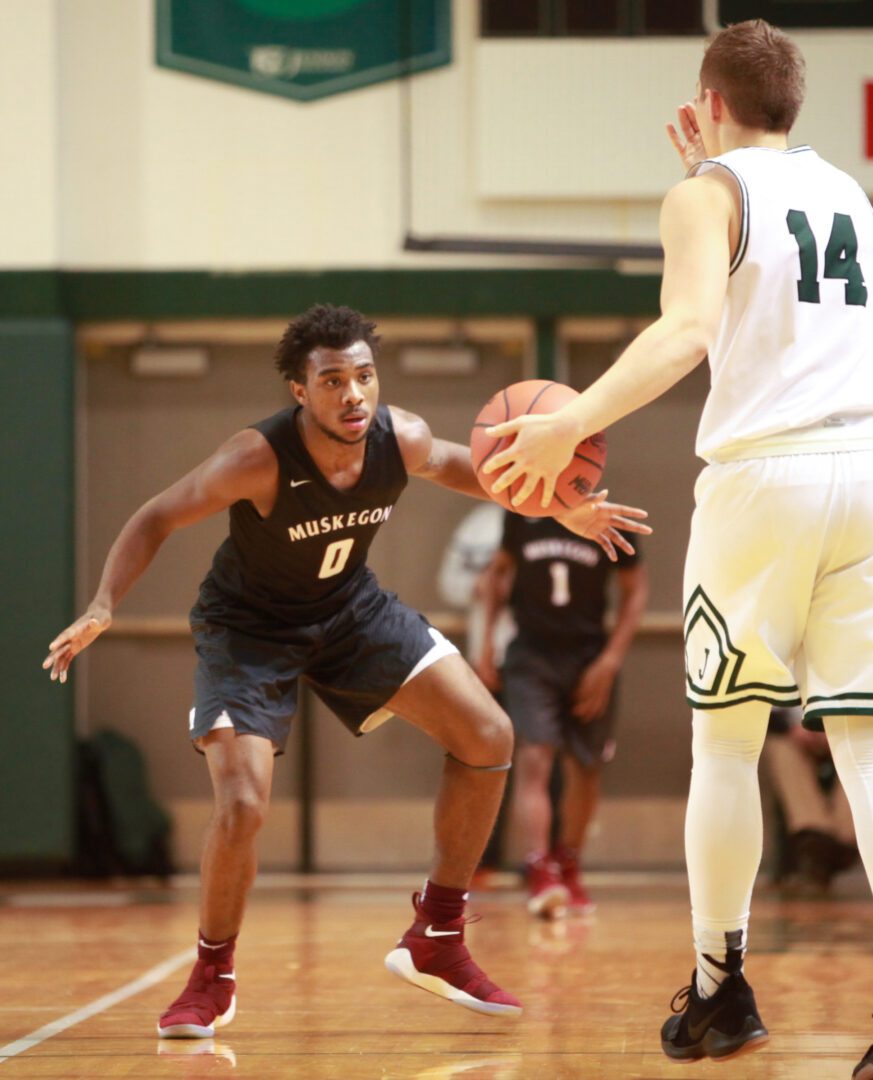 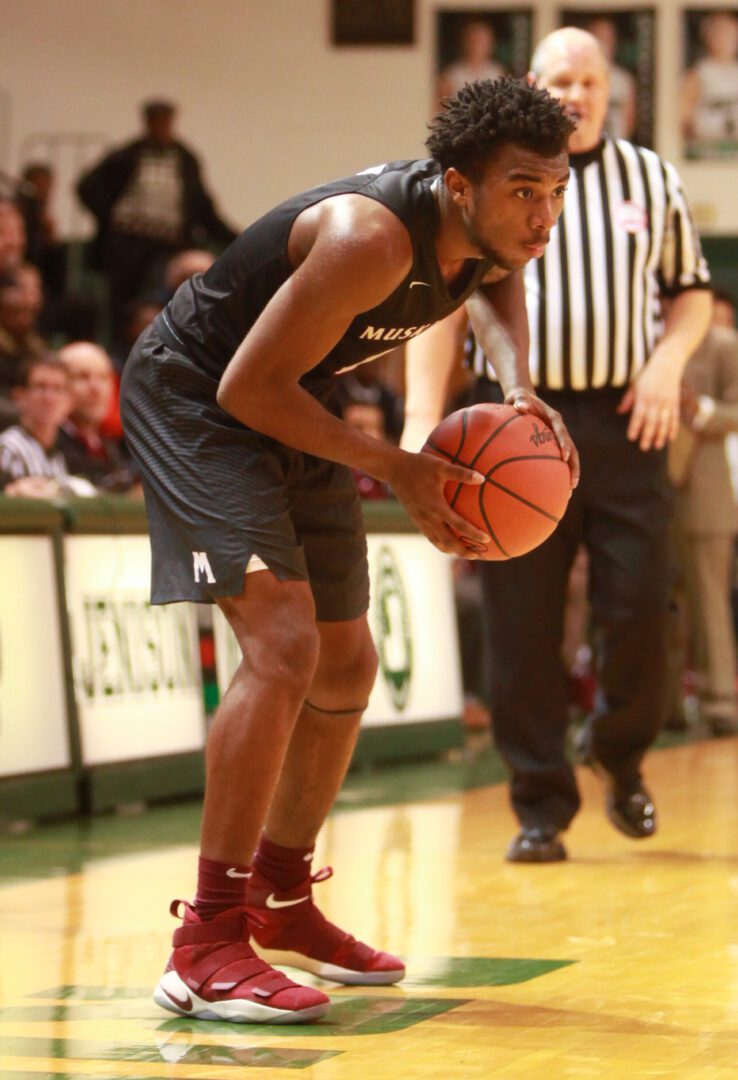 Muskegon’s Willie Shanks gets ready to explode to the basket from the triple-treat position. Photo/Jason Goorman