The Big Reds made just one of six free throw attempts in the fourth quarter as West Ottawa battled back to tie the game. The Panthers then shot a perfect 12-for-12 at the stripe in overtime to secure a 46-42 win at Grandville on Wednesday.

“I thought we played hard, we didn’t close it though,” said Muskegon coach Keith Guy, whose team finished the season with a 20-4 record. “You can’t do that against a good team like that. You’ve got to make your free throws, you’ve got to take care of the ball. We didn’t do that tonight.”

The Big Reds held a four-point lead with five minutes to play in regulation, but the Panthers battled back. West Ottawa tied the game 34-34 on a layup from Xavier Wade with 34 seconds remaining. 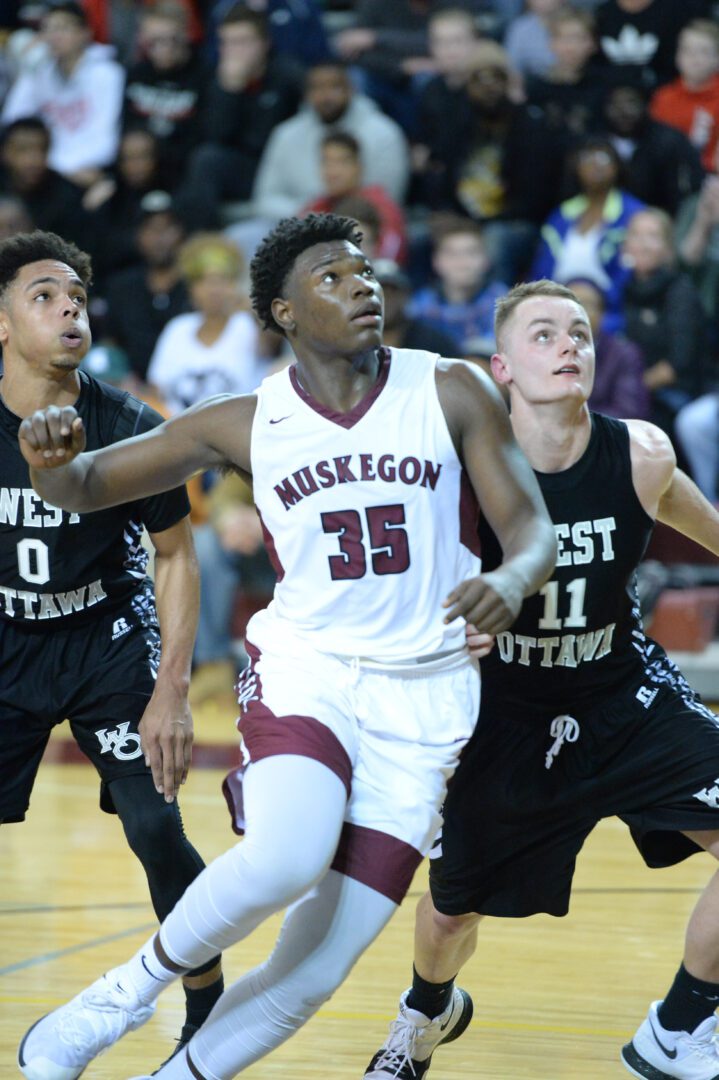 Muskegon center Billie Roberts fights his way into the lane for the rebound. Photo/Craig Smith

Muskegon had the ball for the last possession, but Eonte Tornes’ potential game-winning shot rolled off the rim.

“I wanted to put the ball in his hands,” Guy said of the last play in regulation. “We got a shot in the paint, but it rolled out. You can’t ask for anything other than that.”

The Panthers opened overtime on a 6-2 run, with all of their points coming at the line. Muskegon consistently got the score within two, but had to send West Ottawa to the line to conserve time. The Panthers took advantage by making all 12 attempts to seal the victory and a berth in the state quarterfinals.

Muskegon took a hit when senior Willie Shanks fouled out with just over a minute to play in OT.

“It hurt me a lot,” Shanks said. “I started crying when they said I got my fifth foul. I’m hurt. I’ll remember how we played tonight. I’ll keep that in my mind. I have to play great every night from here on out when I go to college.”

Muskegon’s offense ran through Tornes all night. The junior guard netted 22 points to lead all scorers.

“He’s been stepping up, he’s riding the high,” Guy said. “He’s been our leader along with Willie. Tornes was great and his future is very, very bright.”

Coach Guy believes his team’s future is bright as well. The Big Reds will return a core of Tornes, DeAndre Carter, Billie Roberts and Vern Nash next season.

“We’ll be back,” he said. “We’ve got some key contributors coming back. We’re going to be pretty good next year and the years to come I think.”

The game was tied 5-5 after one quarter with both defenses clamping down. The Big Reds gained separation with an 11-7 edge in the second, capped by a buzzer-beating three from Tornes.

West Ottawa capitalized on five missed free-throws by Muskegon in the fourth, and closed the gap before Wade’s tying layup.

“Tonight was a great game, played by two good teams and the officials called a great game,” said Guy. “Officials can get a lot of grief during an intense game and they let the kids decide this game tonight.” 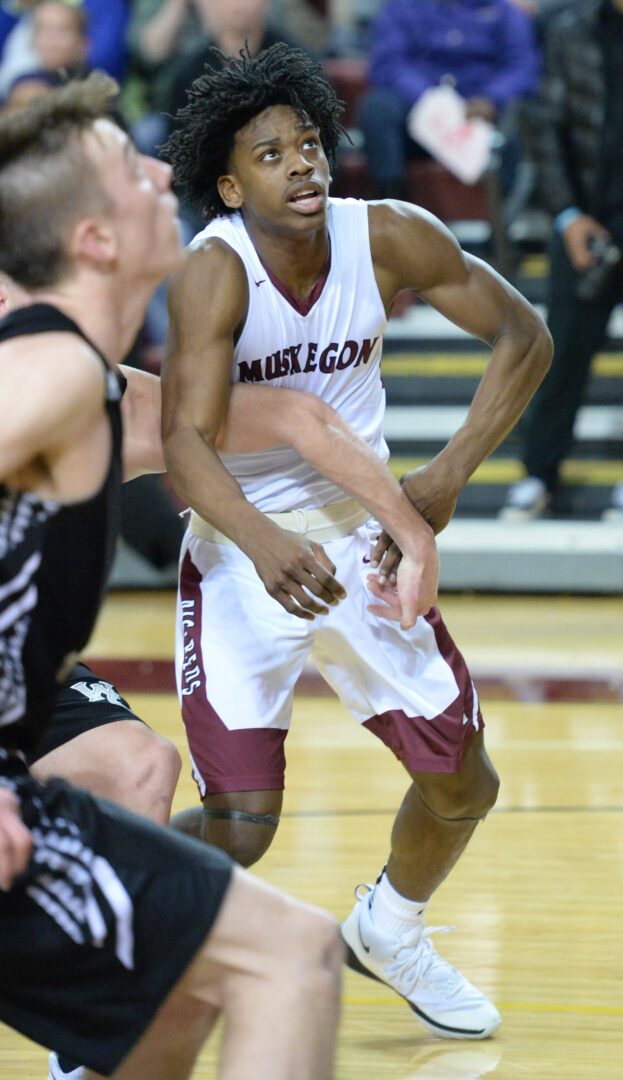 Muskegon’s Clinton Jefferson Jr. tires to get around the West Ottawa box out. Photo/Craig Smith 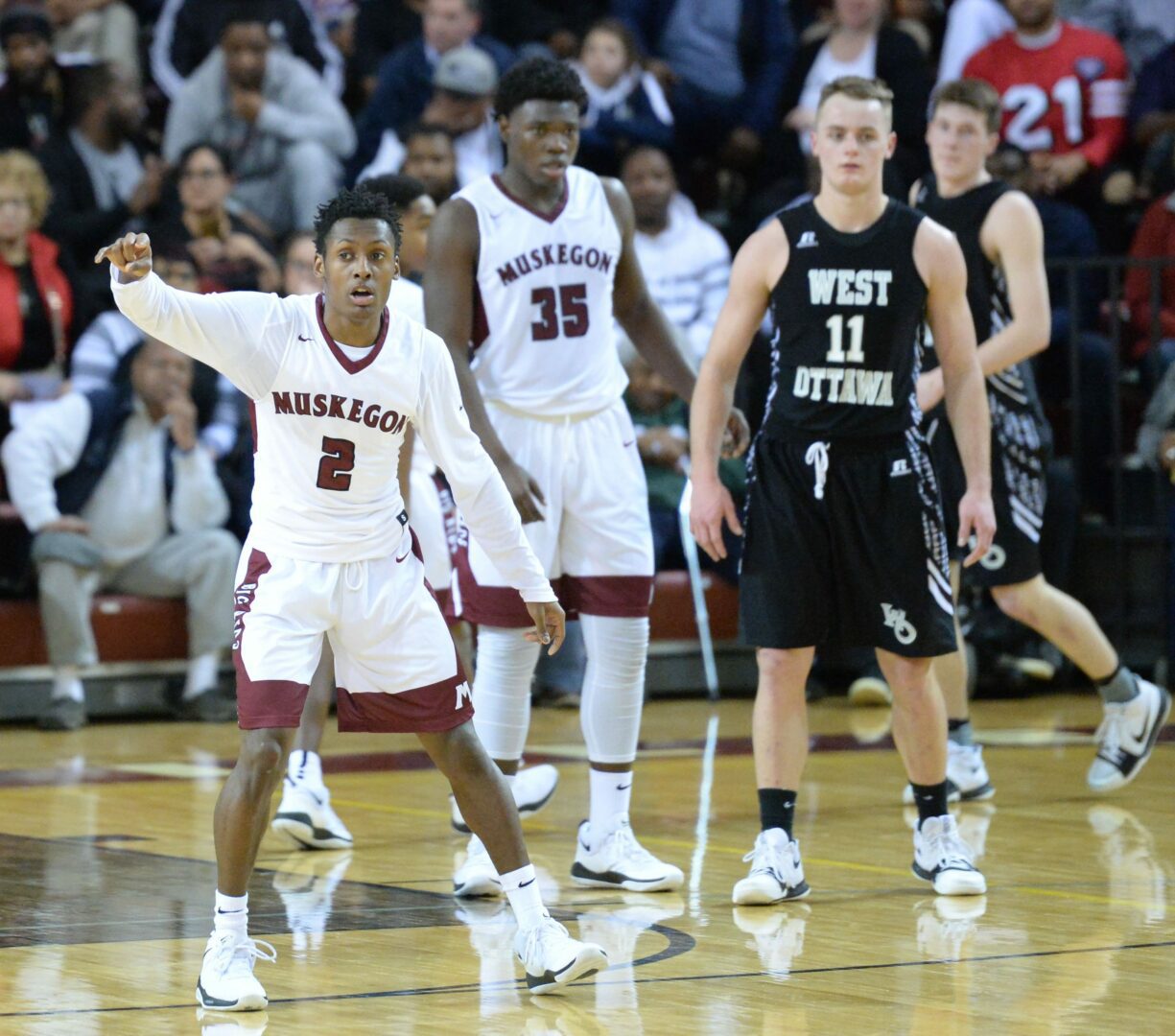 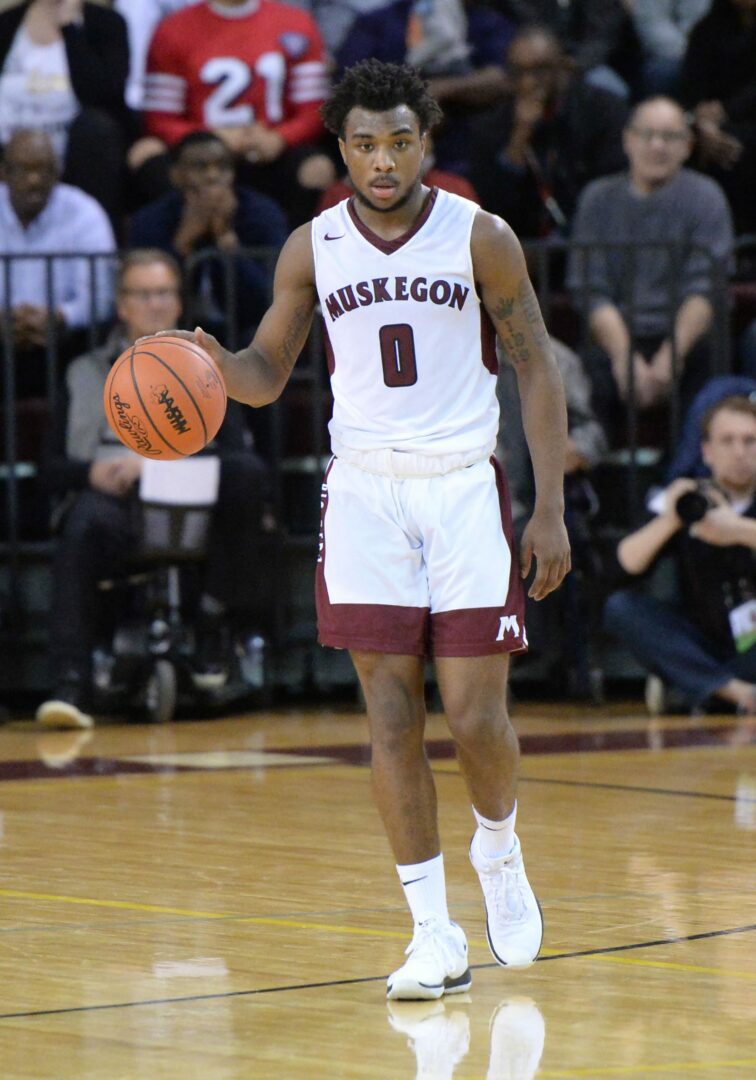 Willie Shanks Jr. brings the ball up the floor for Muskegon. Photo/Craig Smith 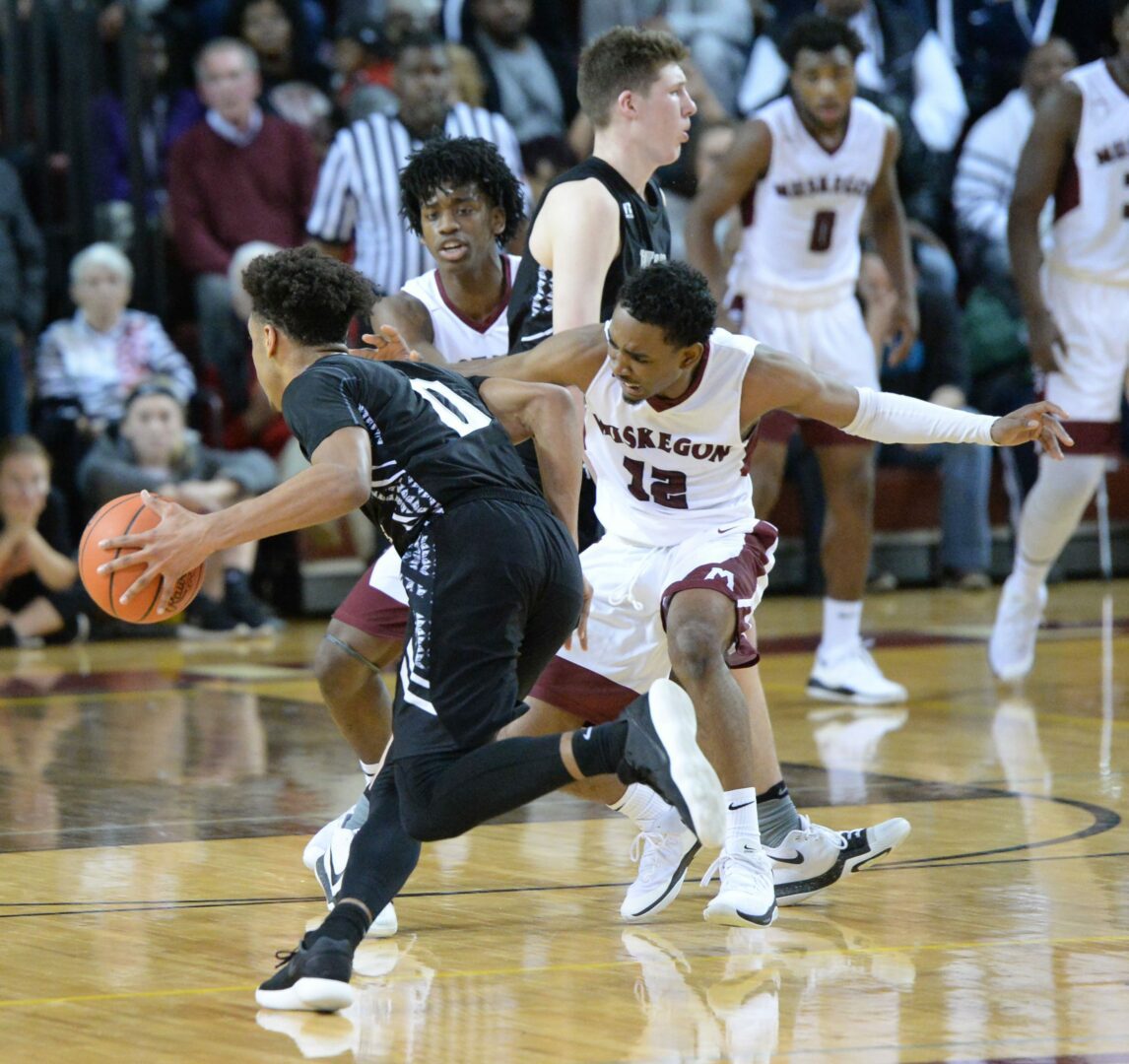 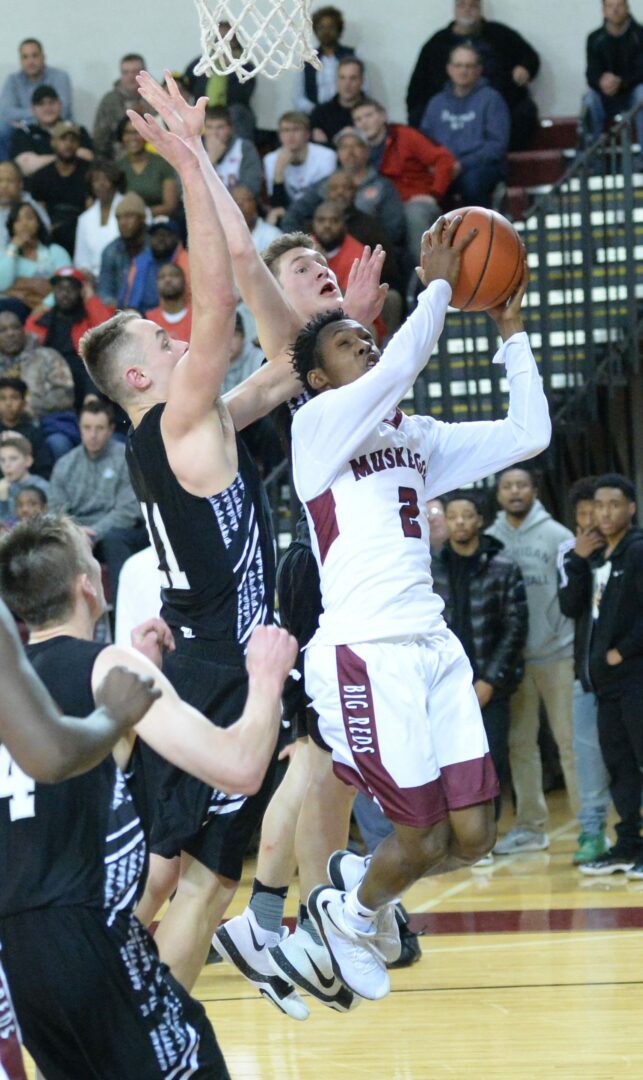 DeAndre Carter Jr. gets to the hoop for Muskegon. Photo/Craig Smith 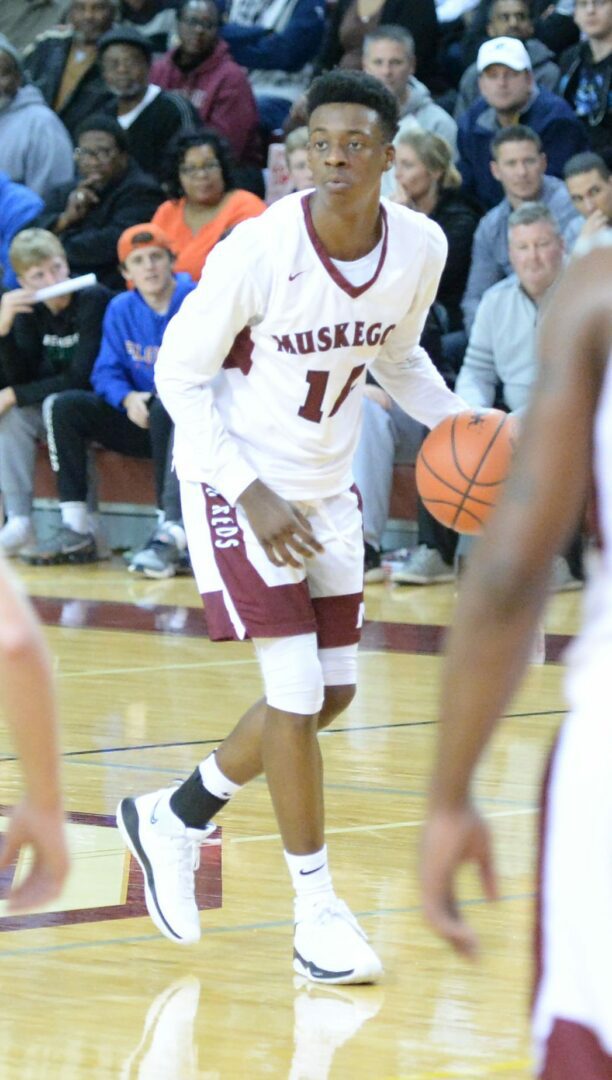 Edriese Jenkins Jr. controls the ball on the outside for Muskegon. Photo/Craig Smith 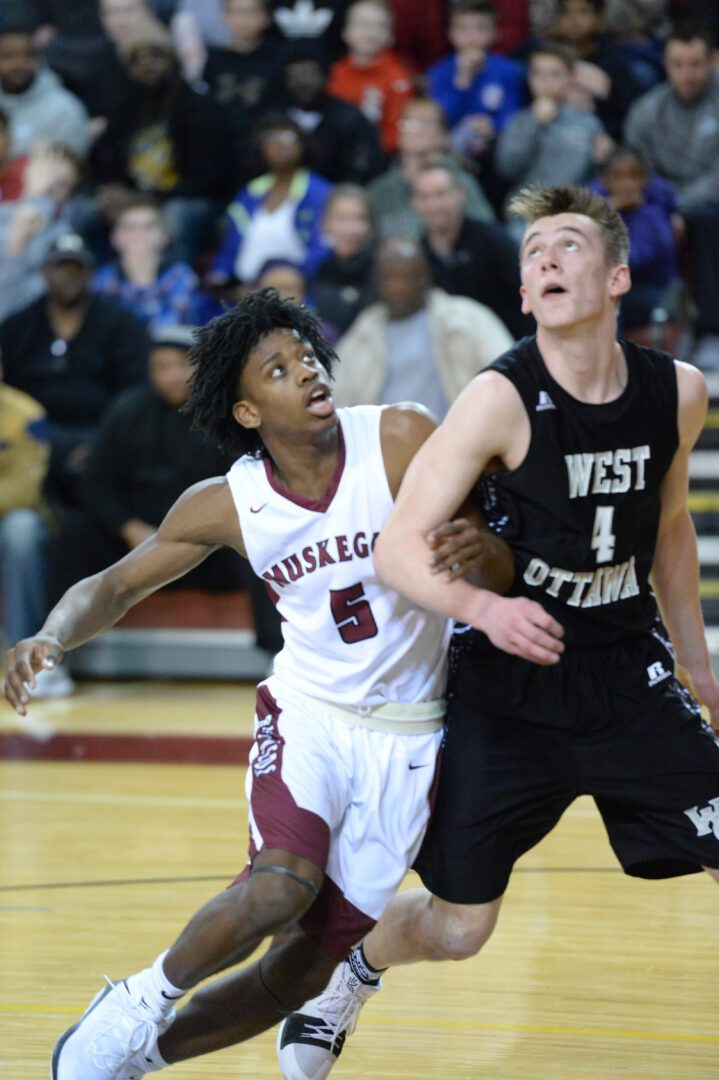 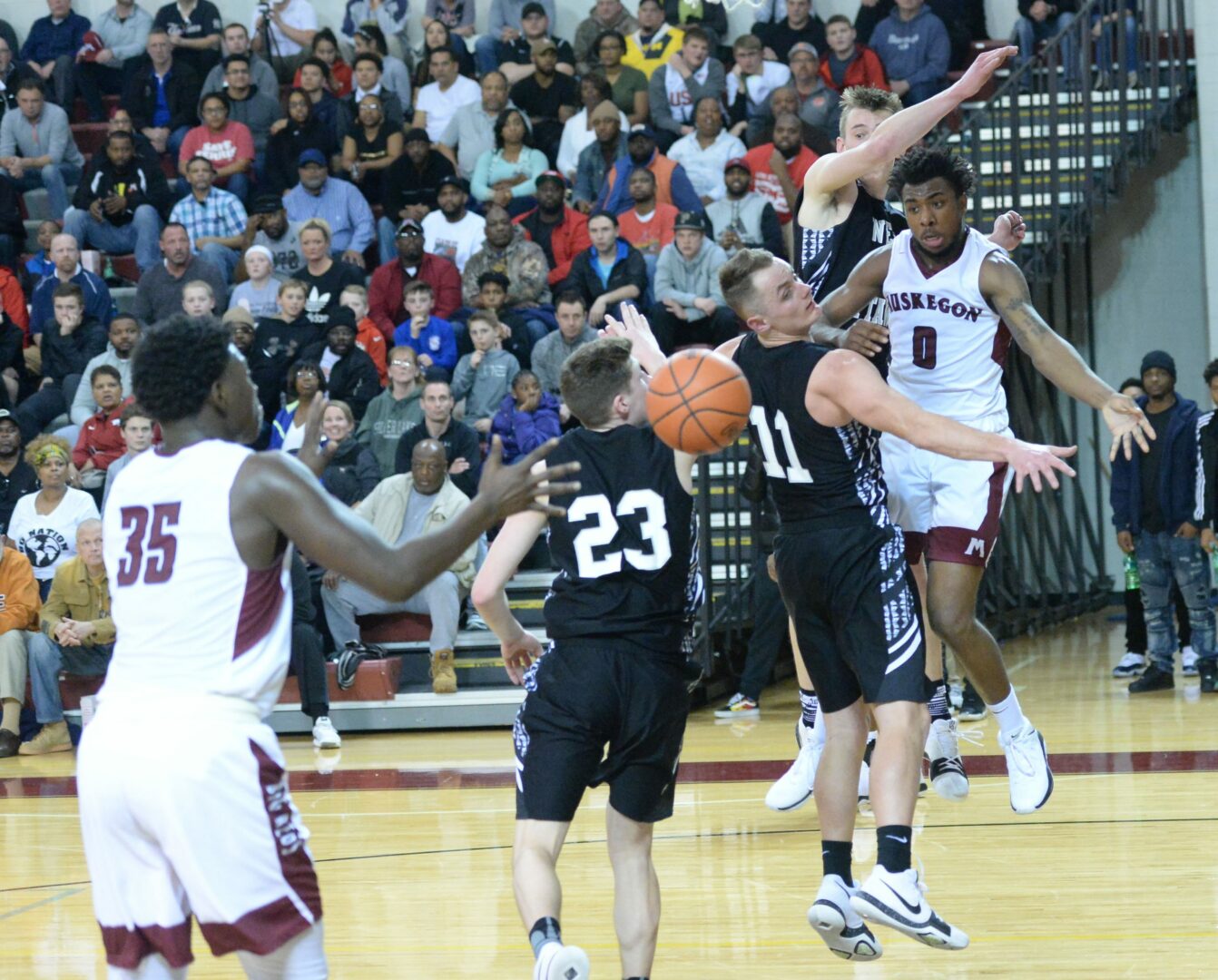 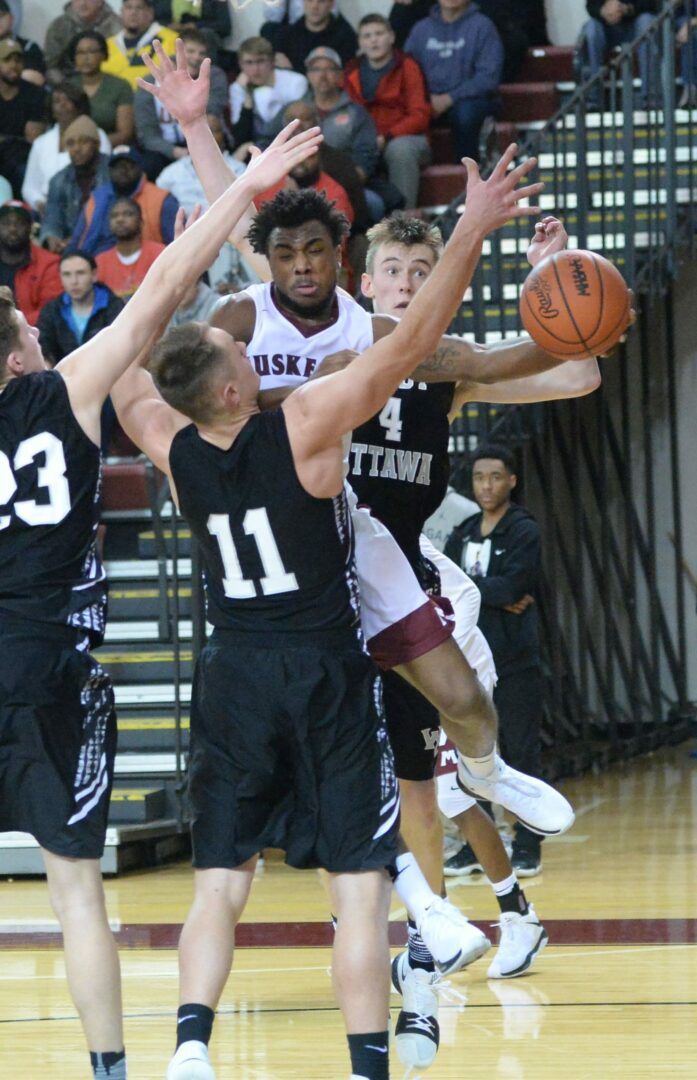 Willie Shanks Jr. tries to get around the West Ottawa defense. Photo/Craig Smith 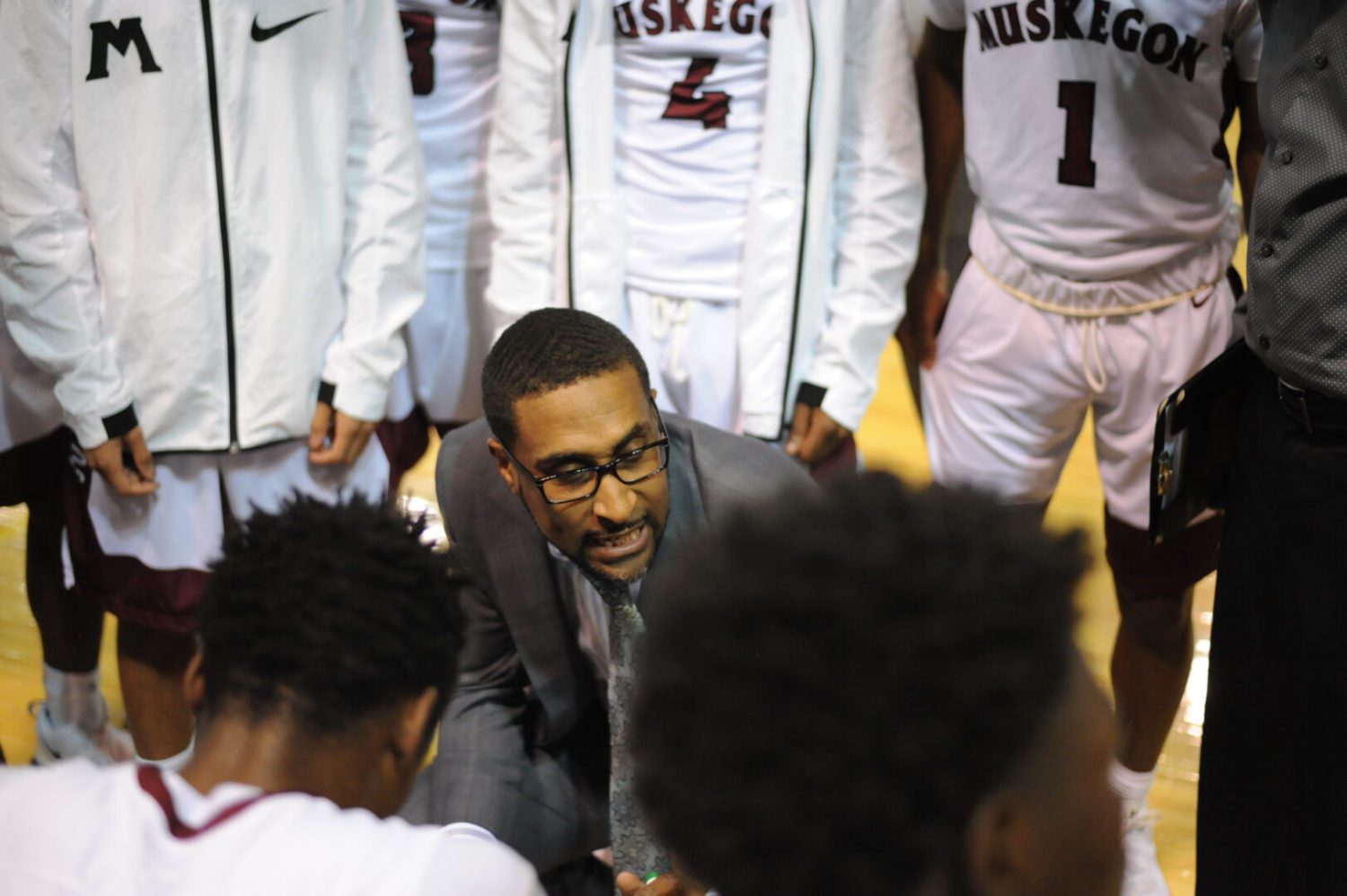 Muskegon Coach Keith Guy talks with his team during a timeout. Photo/Craig Smith 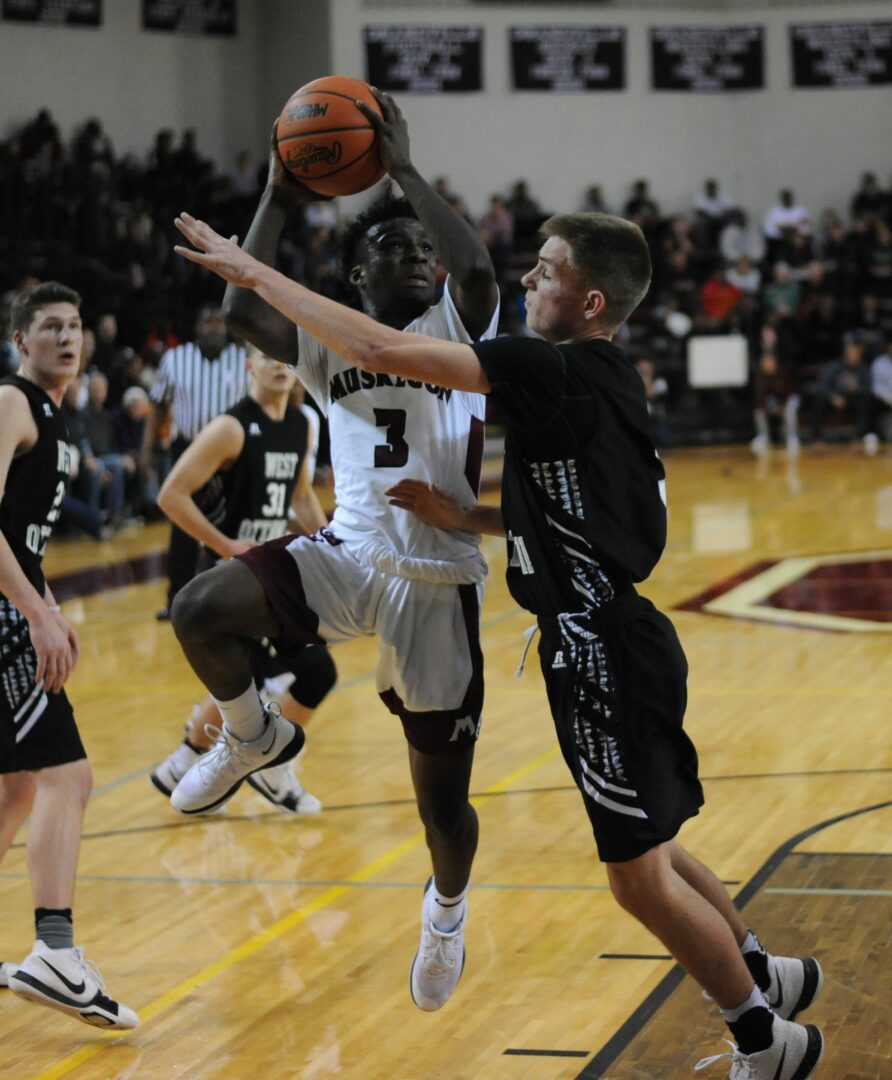 Eonte Tornes goes up on the drive for Muskegon. Photo/Craig Smith 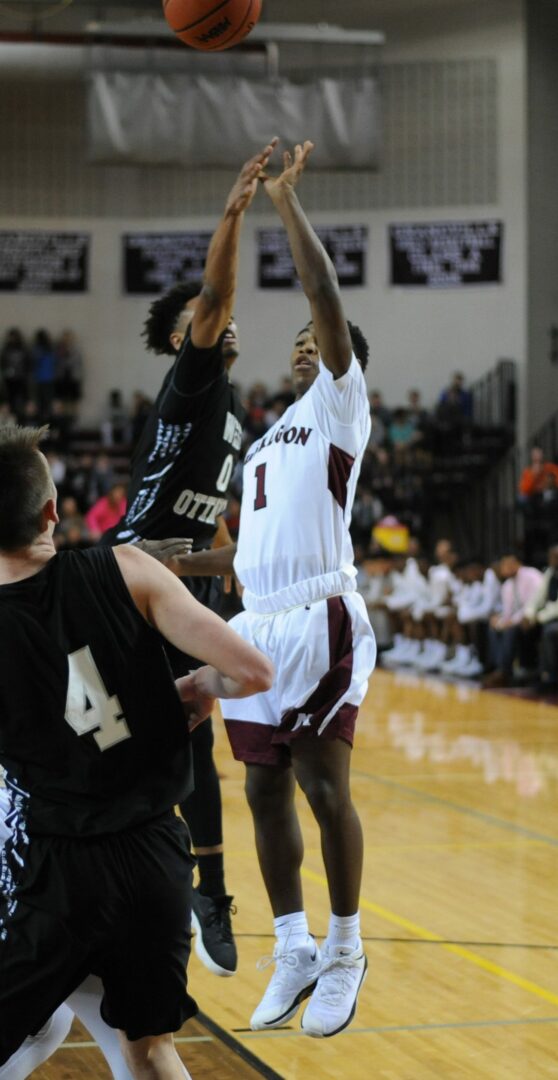 Vern Nash Jr. gets the shot over the West Ottawa defense. Photo/Craig Smith 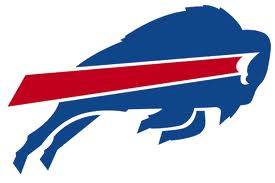