Lumberjacks lose second straight to Omaha, still a point away from clinching playoffs

MUSKEGON – The Muskegon Lumberjacks would love to have a least a few more home games this season.

But there’s no guarantee of that, particularly if they don’t start winning a few more games as the regular season winds down.

The Jacks lost an early lead and fell to the Omaha Lancers 3-2 on Saturday in front of 3,066 fans who showed up at L.C. Walker Arena to see the team’s final regular season home game.

Omaha ended up sweeping the two-game weekend series from Muskegon. It was the first time the Lumberjacks have lost back-to-back games on Friday and Saturday since November.

The loss kept the Lumberjacks from clinching a playoff berth, but they took a step closer when seventh-place Cedar Rapids lost in overtime. Their magic number is now one point, which can they get with one victory or one overtime loss in their remaining games. 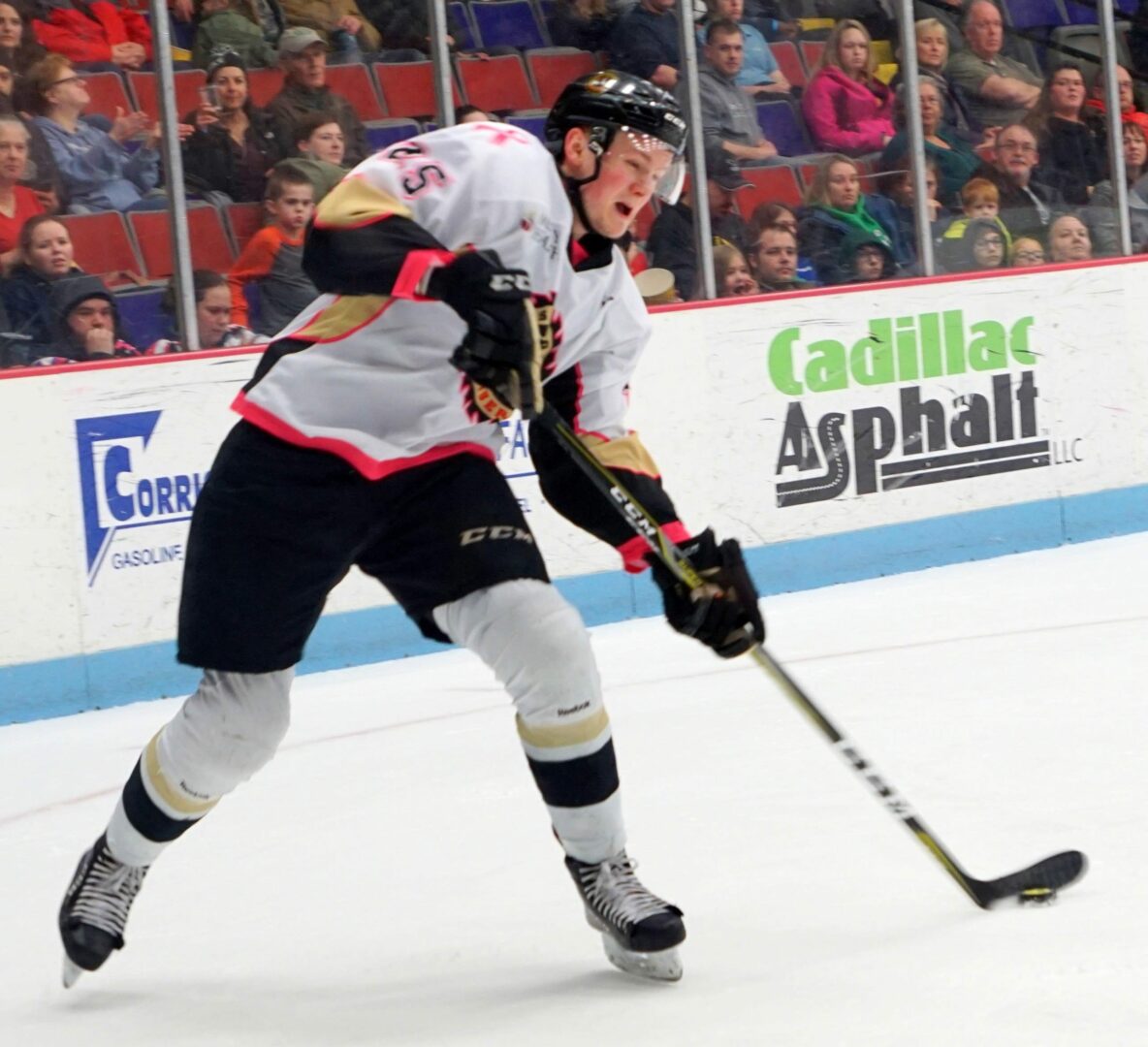 The Jacks now have four games left in the regular season –  all on the road, starting next Friday at Central Illinois – and they’re all pretty important.

Ideally, the Lumberjacks would love to finish in second place in the USHL’s Eastern Conference and get a first-round bye in the playoffs.’

But they’re currently stuck in third place, seven points behind the second-place Youngstown Phantoms, who won on Friday and Saturday.

If the Jacks end up in third or fourth place, they will have to play a 2-of-3 first round playoff series, and all the games would be at home.

But they could easily drop to fifth place, because they only lead fourth-place Green Bay by one point in the standings, and fifth-place Dubuque by three points.

If they ended up in fifth, the Lumberjacks would have to go on the road for their entire first-round series.

Despite the tough weekend, and the challenge that lies ahead, Lumberjacks Coach John LaFontaine remains positive and focused on the next game.

“We’ve got four points on the line next weekend, and we have to take it one game at a time,” he said. “The good thing is we pretty much can control our own destiny. So we need to take care of what’s in front of us.

“You’ve got to stay positive.”

Saturday’s game started out promising when Marc Del Gaizo scored his 11th goal of the season on a power play at 8:13 of the first period to give Muskegon a 1-0 lead. 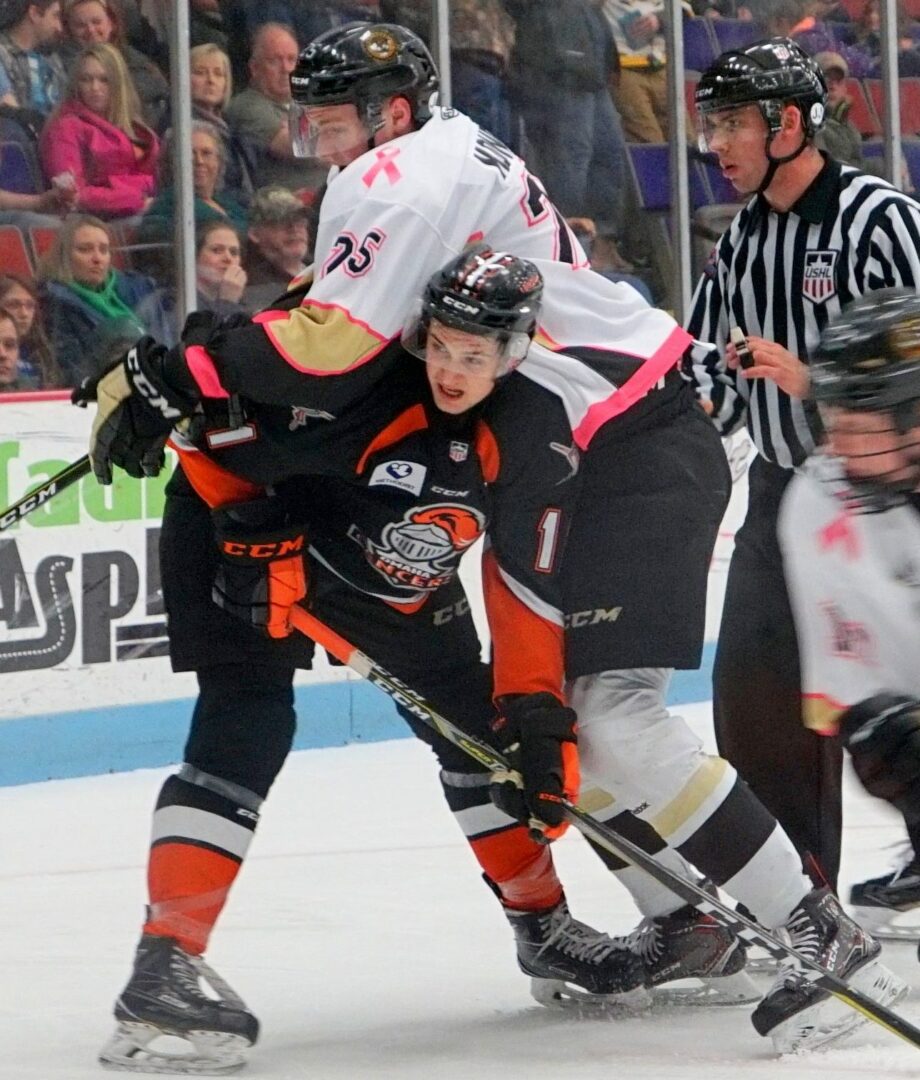 But Omaha’s Filip Suchy knotted things up with a goal at the 16:56 mark, and the game was tied 1-1 after the first period.

The Lancers pulled ahead for good with a power play goal by Nick Perbix just 35 seconds into the second period.

The Lumberjacks had three power play opportunities of their own in the second period, but failed to take advantage and trailed 2-1 at the second break.

Muskegon started the third period badly when Matej Pekar was called for a double-minor penalty at the 2:02 mark, forcing the Jacks to play a man short for a full four minutes.

They managed to kill off the long penalty, but Omaha’s Mick Kohler scored less than a minute after it expired, putting the Lancers up 3-1.

The Lumberjacks had a 6-on-3 skater advantage late in the game, following a pair of Omaha penalties, and cashed in when Vincent de Mey scored his 20th goal with 52 seconds left on the clock.

But the Jacks failed to get the equalizer, and Omaha skated off with its second win in two nights.

The Lancers outshot the Lumberjacks 31-30. Keegan Karki took the loss in goal for Muskegon.

“Yeah that’s a good team,” LaFontaine said about Omaha, which has already clinched a playoff spot, but is fighting for first place in the Western Conference. “They challenged us on all fronts.

“We felt we played good, but we had stretches this weekend where we hurt ourselves with penalties, although our penalty kill was pretty good.”