MUSKEGON – Sometimes good things come out of the blue, and end up costing nothing.

That was the case in October, when the Muskegon Lumberjacks acquired forward Vincent de Mey.

de Mey was coming off a good rookie season with the Madison Capitols in 2016-17, when he collected 12 goals and 4 assists. He returned to the team this fall, fully expecting to spend another season in Wisconsin.

But the numbers game brought about an unexpected change. The Capitols had too many players from his age group on the roster, and league rules forced them to let somebody go. 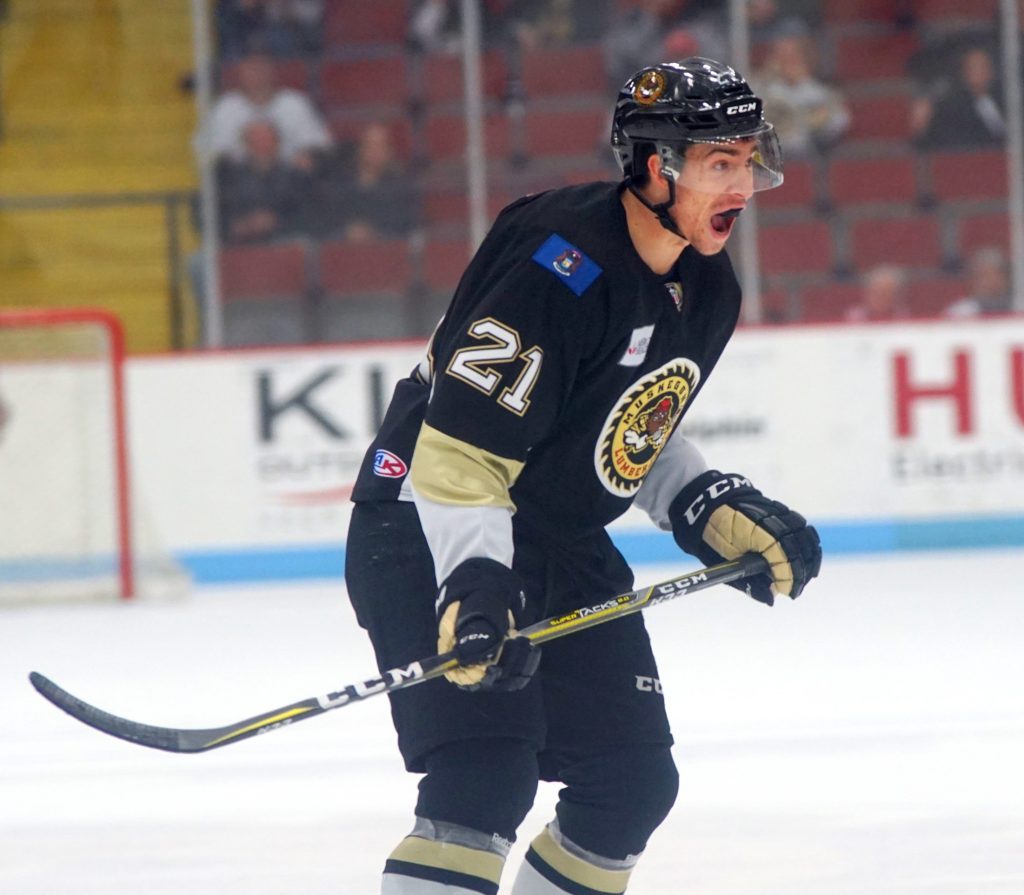 So de Mey was released five games into the season, and the Lumberjacks quickly snapped him up.

“I was just the one to go,” said de Mey, 20, a native of Los Angeles who will play hockey next season for Northern Michigan University. “It was tough emotionally at first, but you just move on.”

Usually getting a quality player involves giving up something of value in return, like another good player or draft picks.

But the Jacks got de Mey for nothing, and it turned out to be a great move for the team.

He has piled up 19 goals (second on the team) and 12 assists so far this season. And he’s been on a real tear lately, scoring six goals with four assists during the seven games in March. That included two goals last Friday night, and two assists on Saturday, in Madison against his former team. 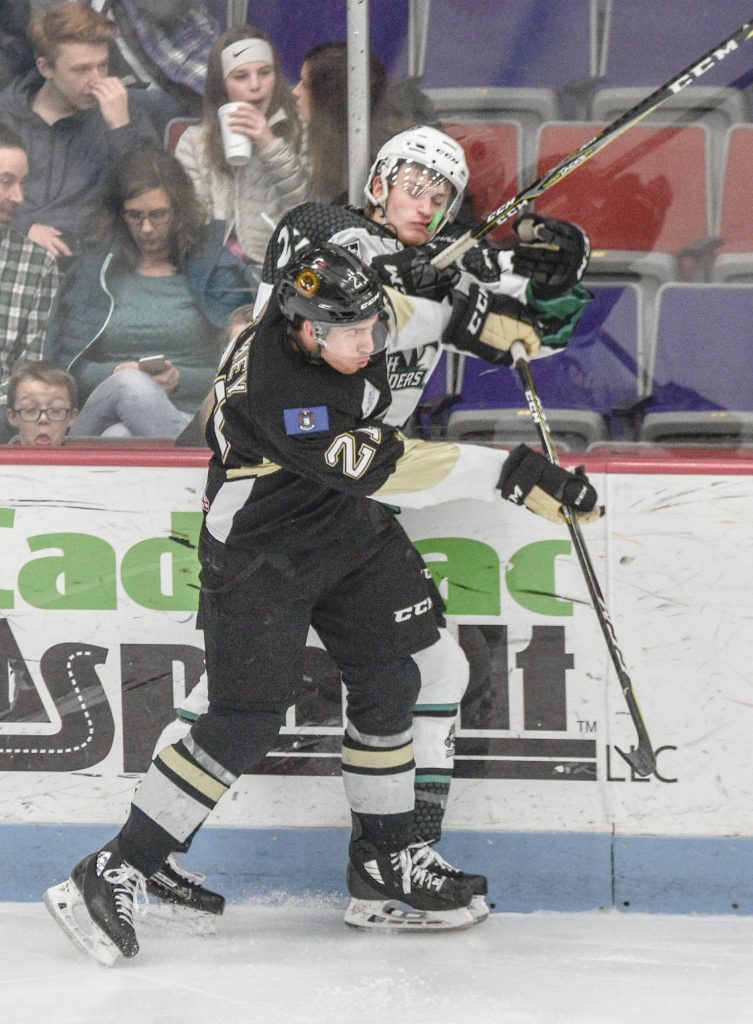 de Mey and the Lumberjacks will host their last two home games of the regular reason on Friday and Saturday against the Omaha Lancers at L.C. Walker Arena. Puck drop will be 7:15 p.m. both nights.

Lumberjacks Coach John LaFontaine coached de Mey for one year at Shattuck St. Mary’s Prep School in Minnesota, and was excited when he heard he was available.

He contacted General Manager John Vanbiesbrouck to let him know, but as it turned out, the GM had already snagged him up.

“I got a call from (de Mey’s) billet in Madison, who used to coach at Shattuck, telling me he was available, but before I could get in touch with John he had already added him to the roster,” LaFontaine said.

The coach is not surprised by de Mey’s current hot streak.

“He’s always had a knack for scoring,” LaFontaine said. “He has a good stick around the net. He’s always worked hard on finding the rebounds, scoring on forehand and backhand shots, and it’s paying off for him.”

de Mey credits his linemates for his recent success. 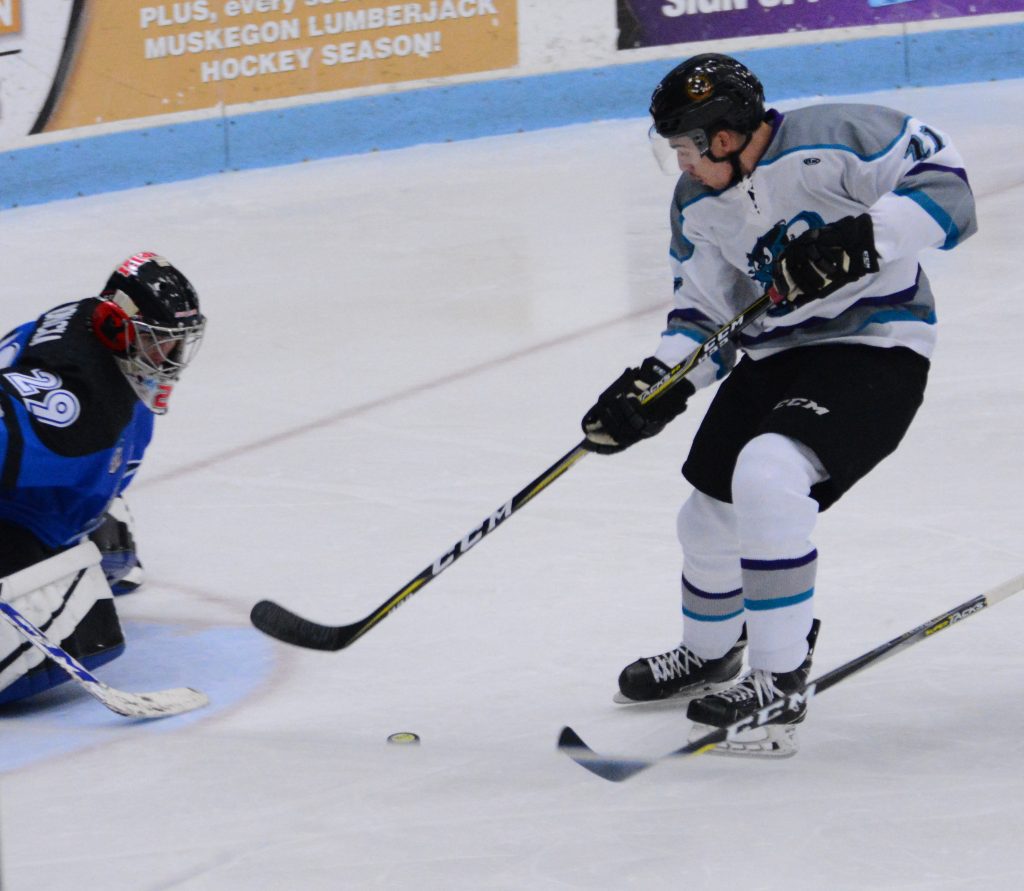 de Mey goes in tight for the shot. Photo/Marc Hoeksema

“I’ve been playing with Jachym Kondelik and Emilio Pettersen lately and our line has just been clicking,” de Mey said. “We talk to each other a lot, we know where each other are going to be on the ice and we get each other the puck.”

Unlike a lot of elite young players, de Mey does not come from a hockey background. He grew up in the warm weather climate of Los Angeles, and nobody in his family played the sport before him.

“I went to a Los Angeles Kings game when I was three and just fell in love with the game,” de Mey said. “My dad said if I wanted to play this sport, I had to quit everything else. I was about four when I started playing, and I think I started playing travel at five or six.”

After growing up in LA, then playing a year in a bustling city like Madison, Wisconsin, one might wonder of de Mey found Muskegon a bit quiet and boring.

But quiet doesn’t bother de Mey at all.

“People kept telling me this is a quiet town, not at all like Madison,” he said. “But I’m a quiet guy. I play golf when it’s nice out and hang out with the guys. That’s all I need.”

Besides, if he had stayed in Madison, de Mey would have been hanging up his skates when the USHL playoffs begin in a few weeks.

The Lumberjacks are four points (two wins) from clinching a playoff spot, and are nearly guaranteed a postseason berth. And they eliminated the Capitols from the playoffs when they beat them Saturday night.

de Mey says he believes the Jacks are capable of much more than just making the playoffs.

“I think we can make a Clark Cup run, for sure,” he said.

de Mey is just one of nine Lumberjacks who have at least 10 goals this season.

Bobby Kaiser is right on the edge with nine goals.

The Jacks are fourth in the 17-team USHL in goal scoring, which is amazing for a team that was shut out twice in its first four games of the season, and struggled to score for the first several months.

“Early on we figured we had some guys who could score, but we didn’t know how much depth we had,” LaFontaine said. “It’s been a pleasant surprise. Obviously Anthony is carrying a big part of the load, but it’s huge for this team to have threats on more than just one line.”