MONTAGUE – A suffocating defense that set up the offense was all Montague needed to win the “Battle for the Bell” once again.

The host Wildcats held Whitehall to one first-half first down and cruised to a 48-7 West Michigan Conference rivalry win on Friday.

Montague improved to 4-1 overall and 4-0 in the conference, and remained tied with Oakridge at the top of the WMC standings. Whitehall fell to 3-2 overall and 2-2 in league play.

After holding the Vikings to a three-and-out to open the game, the Wildcats drove to Whitehall’s 30- yard-line, where they faced a 4th-and-3.

Quarterback Drew Collins threw short to Kenyan Johnston, who broke a tackle while reaching for the first down, then pulled away from the defense for a 30-yard touchdown reception. The PAT gave Montague a 7-0 lead just five minutes into the game.

Montague’s No. 33 Bryce Stark breaks free on the run past the Whitehall defense. Photo/Tim Reilly

The seven play, 66-yard drive would be the Wildcats’ longest of the first half. The defense forced Whitehall to punt on its first seven possessions, setting up plenty of short-field scoring opportunities for the offense.

“I thought the defense played great,” Wildcats coach Pat Collins said. “We didn’t give up a lot of yards, which forced them to punt into the wind and gave us great field position.”

Montague’s second possession started at the Whitehall 35 but stalled at the 10-yard line when Vikings defensive back Kyler Honore intercepted a Drew Collins pass.

After a 22-yard punt return by the Wildcats’ Nick Stever put the ball at the Vikings’ 25, Collins connected with Johnston for a pass down to the 2-yard line. A play later, Bryce Stark scored from two yards out, and Montague had a 13-0 lead with 2:16 left in the first quarter.

That turned out to be the halftime score, as well. Montague had two drives deep in Whitehall territory stopped due to interceptions, at the 10-yard line and the 17-yard line. Both interceptions were by Honore, his second and third of the first half.

Montague increased its lead to 20-0 with an 11-play, 62-yard drive on the first possession of the third quarter. It was capped off with a 4-yard TD run by Stark at the seven minute mark.

Four minutes later, Johnny Monette burst through the middle of the Whitehall defensive line for a 38-yard score, and Montague led 27-0.

“It starts up front, with Montague’s front seven,” Vikings coach Tony Sigmon said. “Those kids are some big kids, and physically strong. We have to play a good football game against kids like that, and we didn’t execute like we would’ve liked to.”

Whitehall’s No. 21 Kyler Honore and No. 2 DJ Wright celebrate after taking down Montague’s No. 21 Kenyan Johnston in the backfield. Photo/Tim Reilly

Whitehall got on the board early in the fourth, cutting the lead to 27-7 on a 44-yard touchdown pass from Gavin Schaeffer to Terrell Harris.

Montague responded with a Collins 12-yard touchdown run, and a Collins to Brennen Schwarz 28-yard TD pass, to take a 41-7 lead with 6:08 to play.

The Wildcat defense finally got on the board when Stever returned an interception 55 yards for the final score with 5:25 left in the game.

The Whitehall/Montague rivalry bell, that had been sitting on the Wildcats’ bench all night, was lifted high into the air and carried to midfield as the final seconds ticked off the clock.

“Just all around tonight, our coaches to the guys on defense, they were just phenomenal,” Coach Collins said.

Montague finished the game with 400 yards of offense, including 272 on the ground.

Stark had 24 carries for 126 yards, while Collins finished with 91 yards on 11 carries. He also passed for 128 yards. Johnston had 78 receiving yards on six receptions.

Whitehall had 193 total yards, led by Kayleb Venema with 15 carries for 73 yards. 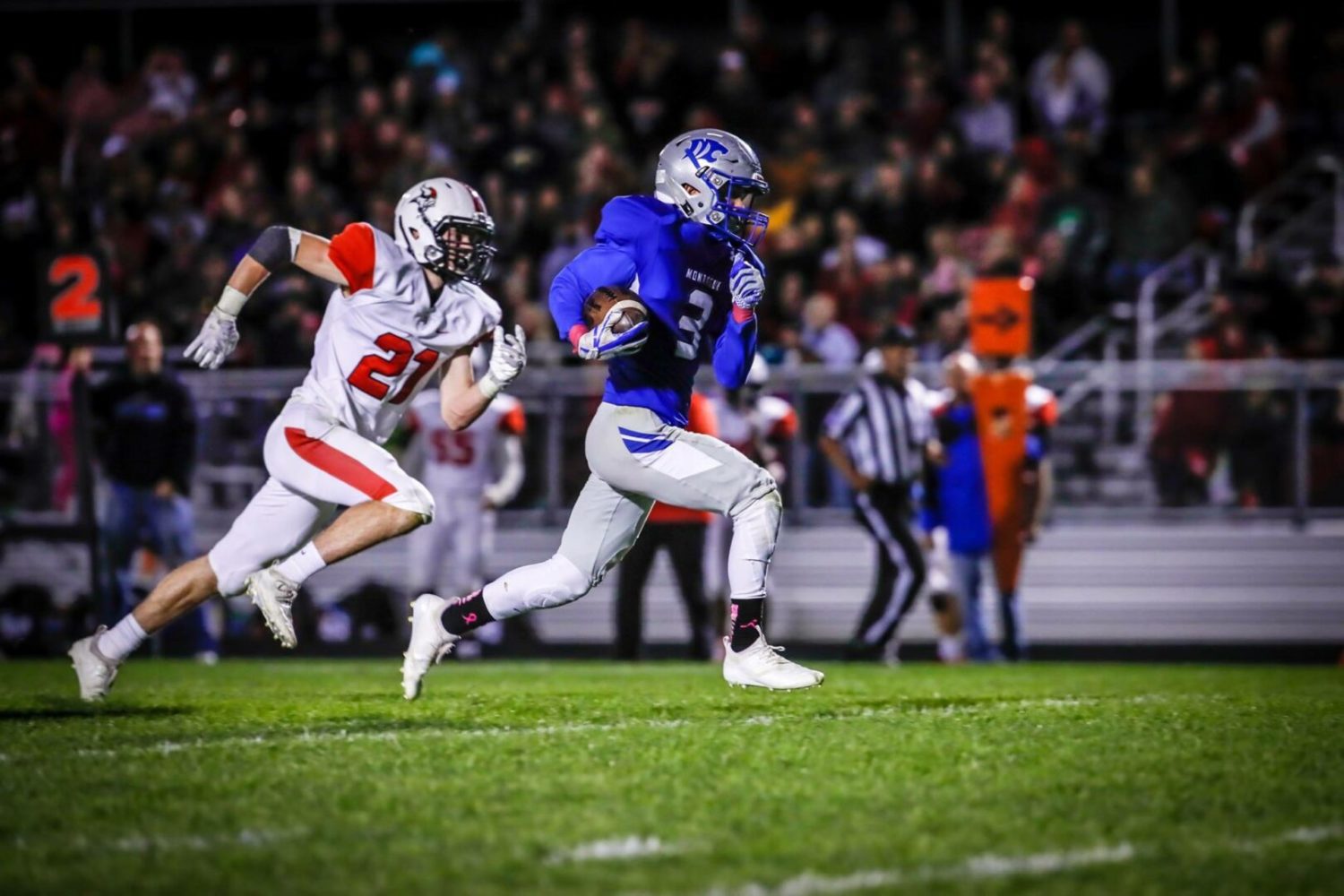 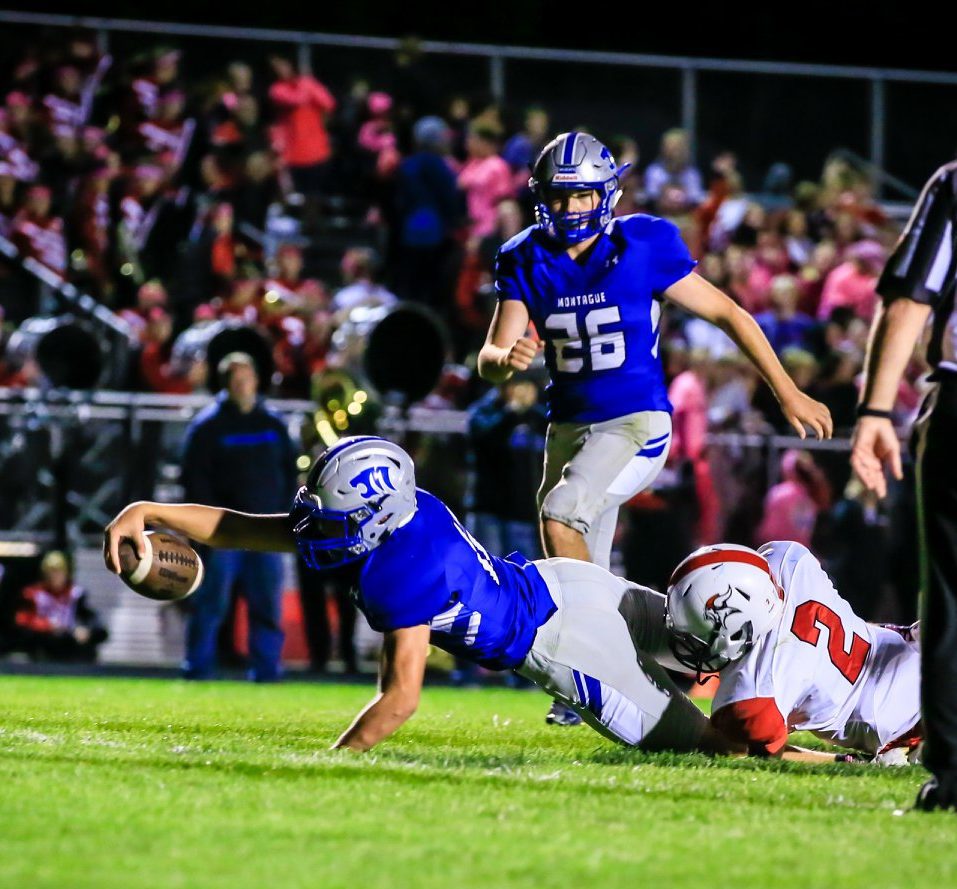