By Nate Thompson
LocalSportsJournal.com
There were several college basketball coaches in attendance on Tuesday at the Muskegon-

But it was a college football coach who caught the attention of several fans at Redmond-Potter Gymnasium.
University of Michigan coach Jim Harbaugh entered the gym in the second quarter and was instantly mobbed by spectators looking to get a photo or autograph.
Although he couldn’t comment specifically due to NCAA rules, Harbaugh was very likely in attendance to catch a glimpse at a pair of Big Red basketball players that he would like to recruit for the Michigan football squad. 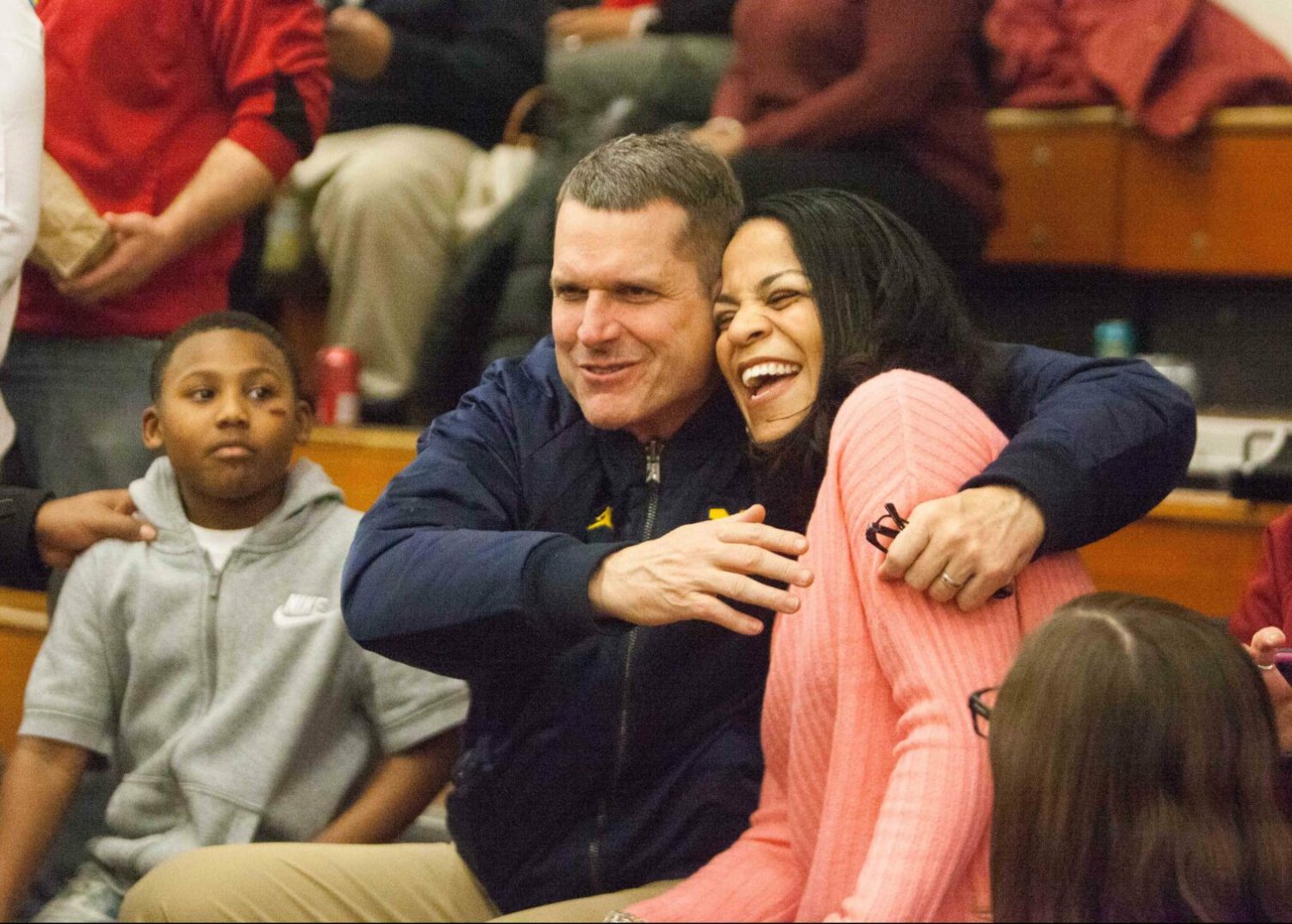 University of Michigan head football Coach Jim Harbaugh hugs a happy fan after getting their picture taken together at halftime. Photo/Jason Goorman

He was accompanied by his brand new offensive coordinator, Josh Gattis.
Michigan already offered a scholarship to junior quarterback Cameron Martinez on Nov. 11, but the Wolverines could be close to also extending an offer to junior Billie Roberts, a defensive end who recently was offered a scholarship by Michigan State.
“Just here checking out the atmosphere,” Harbaugh told LocalSportsJournal.com during a break in the third quarter. “The roads were pretty bad out there, but I love getting out (to West Michigan).”
Harbaugh said he typically tries to get to a handful of games across the state to watch potential recruits.
“I’d say I watch about five or six or six a year,” he said. “It’s a down time of year right now. The players are lifting and of course going to school. But it gives our coaches a chance to venture out and catch some games like this.”
Martinez, who is considered a four-star recruit in the 2020 class, is likely being considered for several different positions at the college level. Most talent evaluators have the 5-11, 185-pounder pegged as a slot receiver or safety.
In his first season as Muskegon’s quarterback after transferring from Muskegon Catholic Central, Martinez turned in a dominating season, rushing 222 times for 2,316 yards and 36 touchdowns. His yardage and touchdown totals were both single-season records at Muskegon. 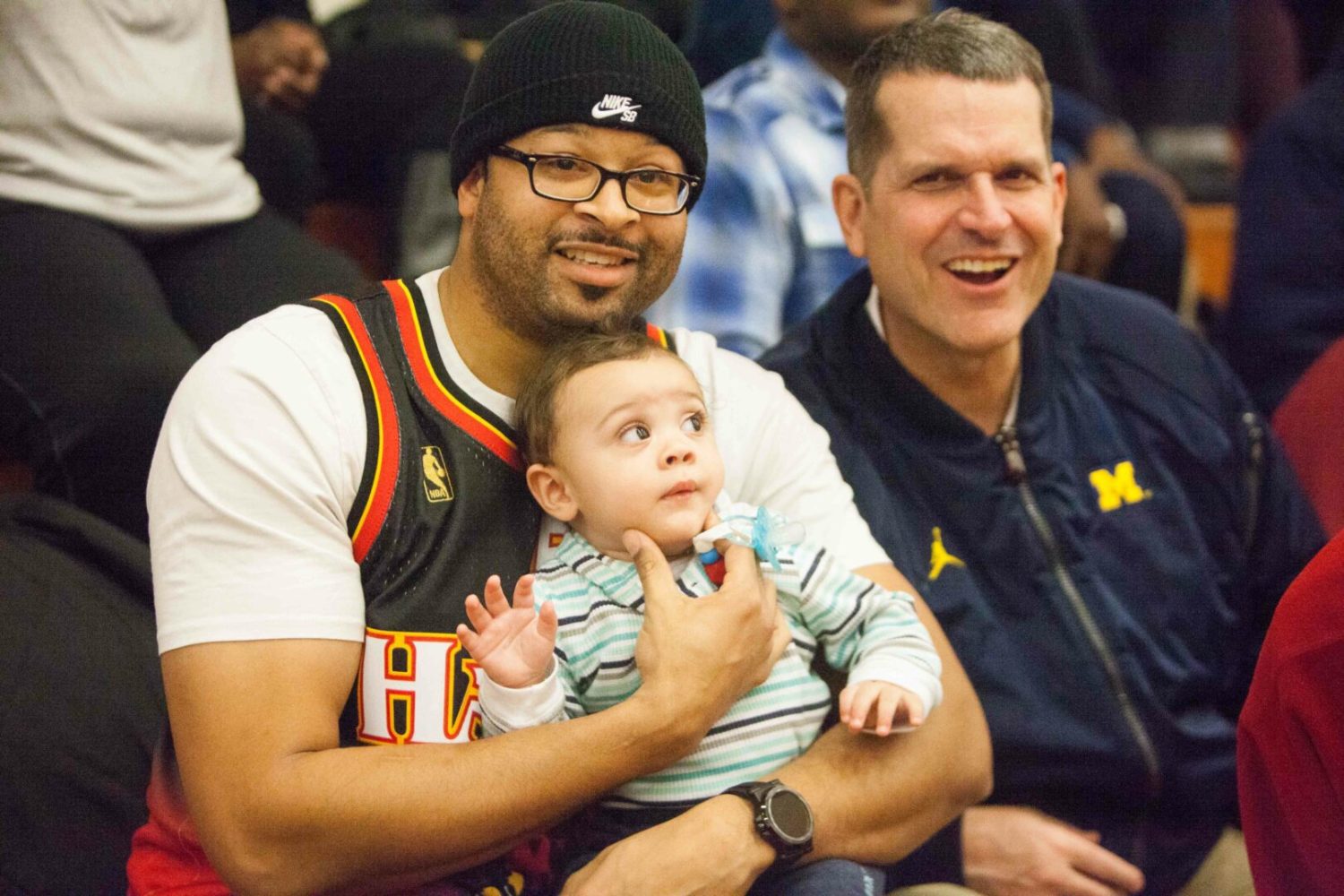 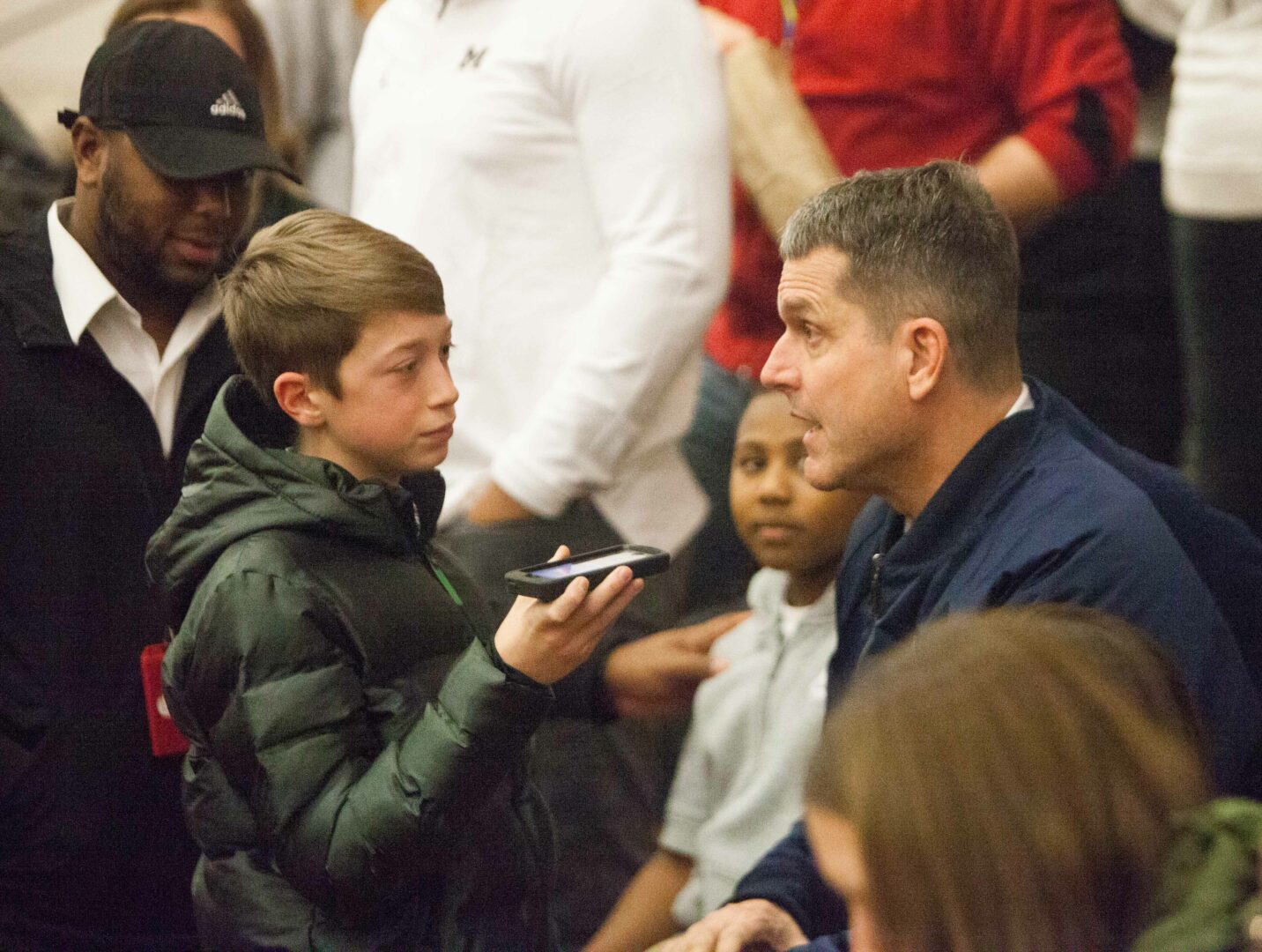 University of Michigan head football Coach Jim Harbaugh hugs a happy fan after getting their picture taken together at halftime. Photo/Jason Goorman