MUSKEGON – The North Muskegon girls soccer team is ranked No. 1 in the state in Division 4, largely because

of its powerful offensive attack.

If any opponents are going to knock the Norse out of the state tournament, they will have to find a way to shut down that attack.

Grandville Calvin Christian couldn’t do it on Tuesday.

One more win and the Norse, now 19-2 on the season, will be back in the state semifinals for the second straight season. 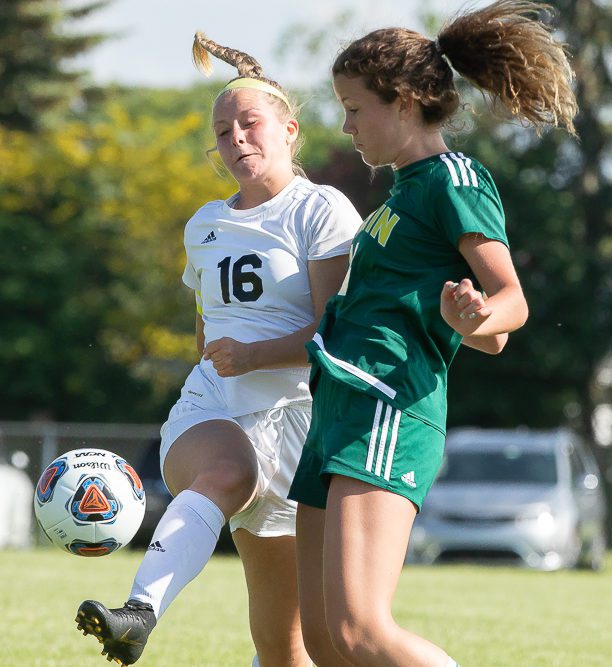 The Norse had four shots on goal in the opening five minutes of play and kept the ball in Calvin Christian’s end of the field for most of the opening half.

“That’s what we asked the girls to do – come out insanely strong the first 10 to 15 minutes to send a message,” Norse coach Ryan Berends said. “We have a lot of speed and a lot of attacking power. If we can hold it down in their end, that’s a bonus for us.”

Despite a handful of fantastic saves by Squires goalie Alyssa Kiekover, NM eventually broke through at 26:36 of the opening half.

Johnson took a long pass from Ayla Pitts, held off a defender and beat Kiekover, low and left.

Mueller followed suit 2:23 later, taking a long pass from Elysia Maurer and scoring for a 2-0 lead.

Johnson once again was able to power through the Calvin Christian defense and score, this time with an assist from Abby Grevel with 10:25 left in the half, to give the Norse a 3-0 halftime lead.

North Muskegon had a 10-0 shot advantage at the break.

The Squires put their first shot on net 1:23 into the second half, but were easily turned away by Norse goalie Syann Fairfield.

Mueller finished off the scoring for the Norse, first on a penalty kick after being tackled in the box with 31:46 remaining in the game, then off a pass from Audrey Wilson with 16:33 left.

North Muskegon, which reached the state semifinals last year, is one win away from getting back to where it left off.

“When you look at what we accomplished last year, it was like ‘Wow! We can do this,'” Berends said. “This year it’s a different mindset. This year, it’s ‘We are going to do this.’ But it’s one game at a time.”

The Norse finished the game with a 20-4 shot advantage as Fairfield earned the shutout. 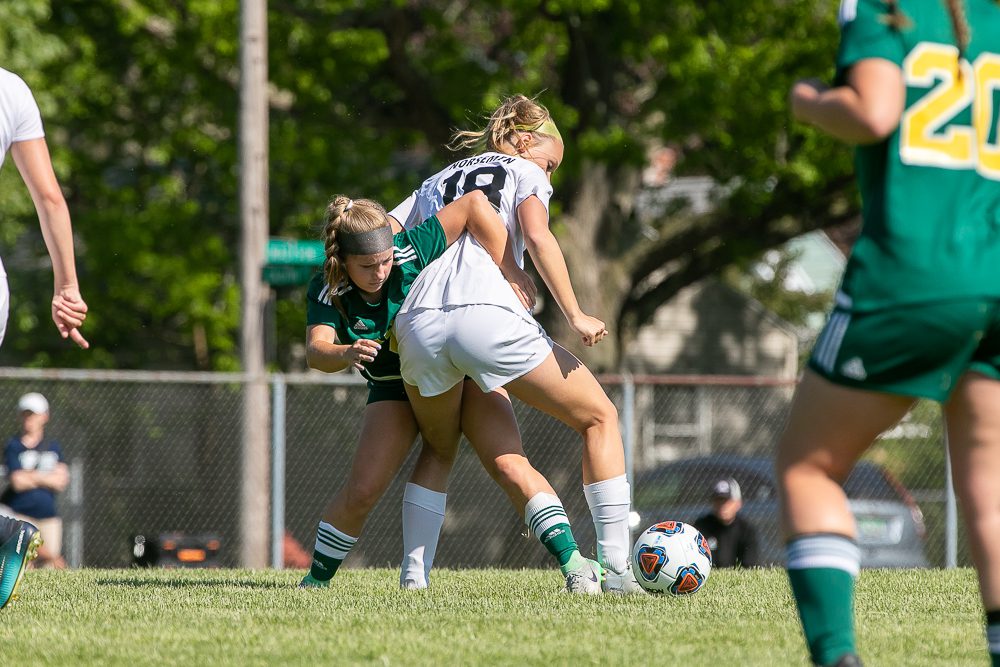 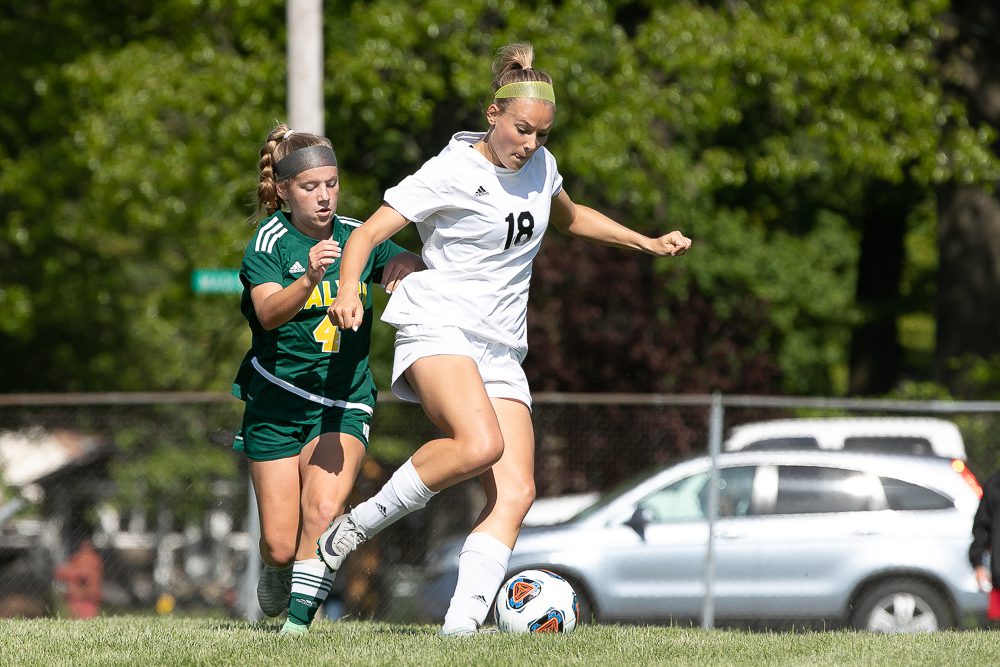 Abby Grevel lays off a drop pass with Calvin Christian’s Reagan Huttenga on her back. Photo/Randy Riksen

Sophia Schotts and No. 18 Abby Grevel congratulate Hope Johnson after her first goal of the night for the Norse. Photo/Randy Riksen 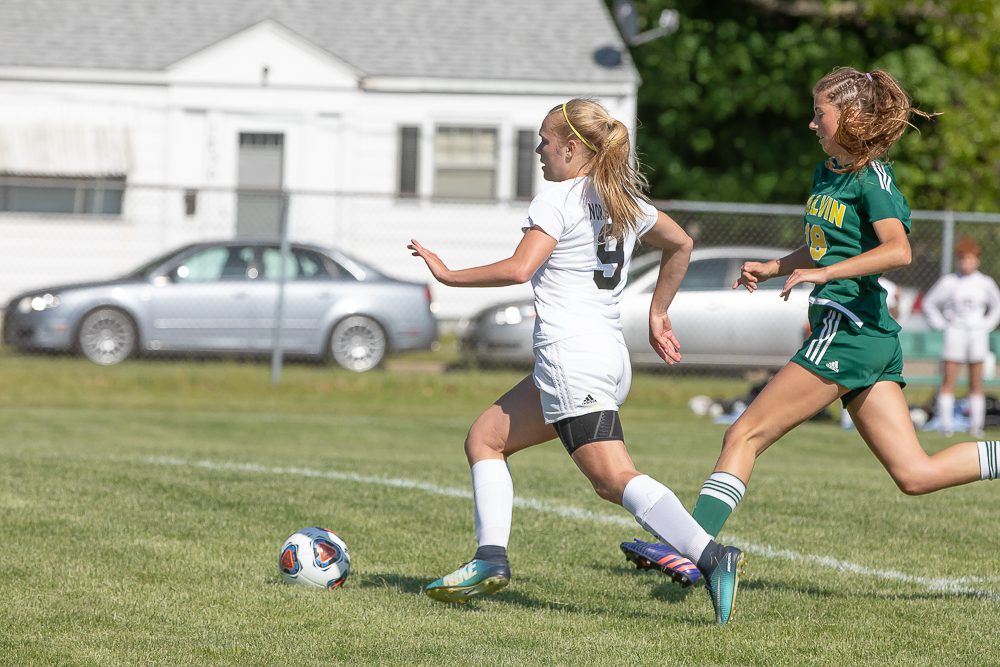 North Muskegon’s No. 9 Hope Johnson makes a move into the box for her first goal of the night while Morgan Velting races after her. Photo/Randy Riksen 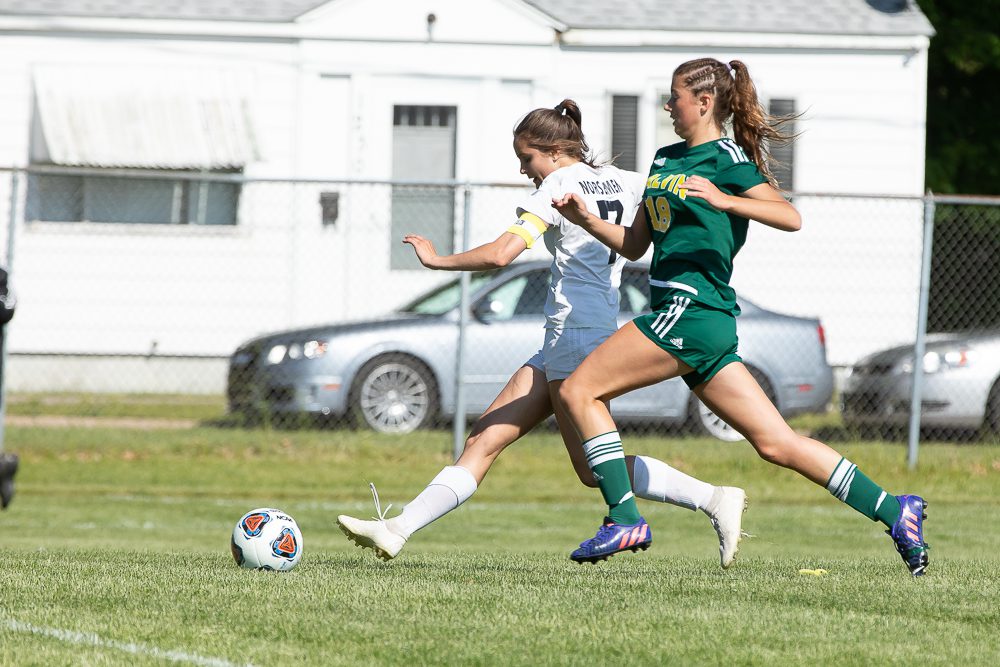 Sophie Mueller puts in the Norse’ second goal of the night. Photo/Randy Riksen 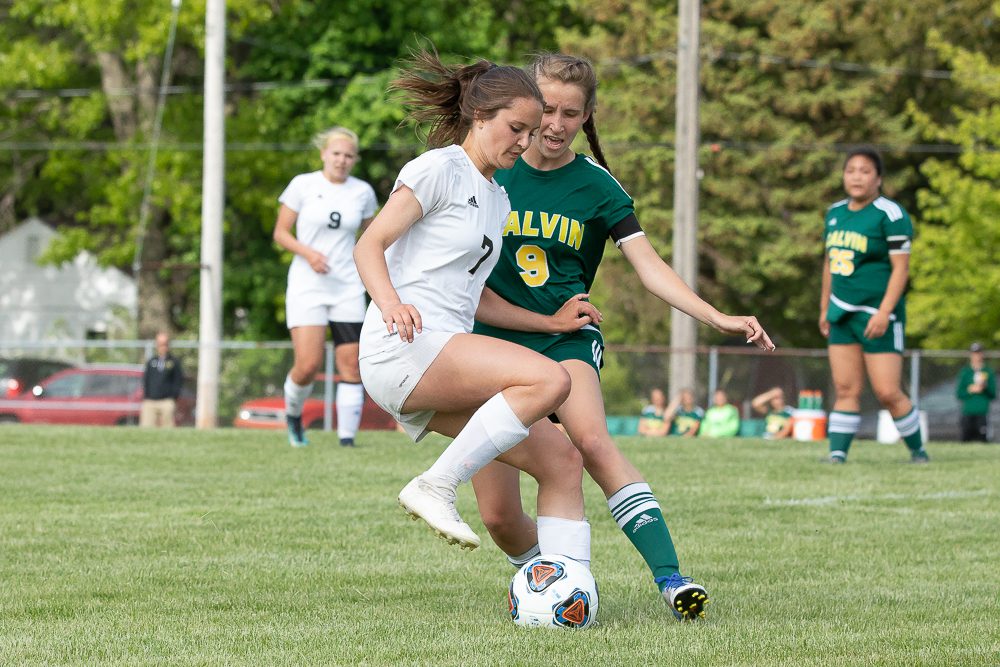 Sophie Mueller puts a move on Calvin Christian’s Grace Rush which led to a foul in the box resulting in a penalty kick. Photo/Randy Riksen 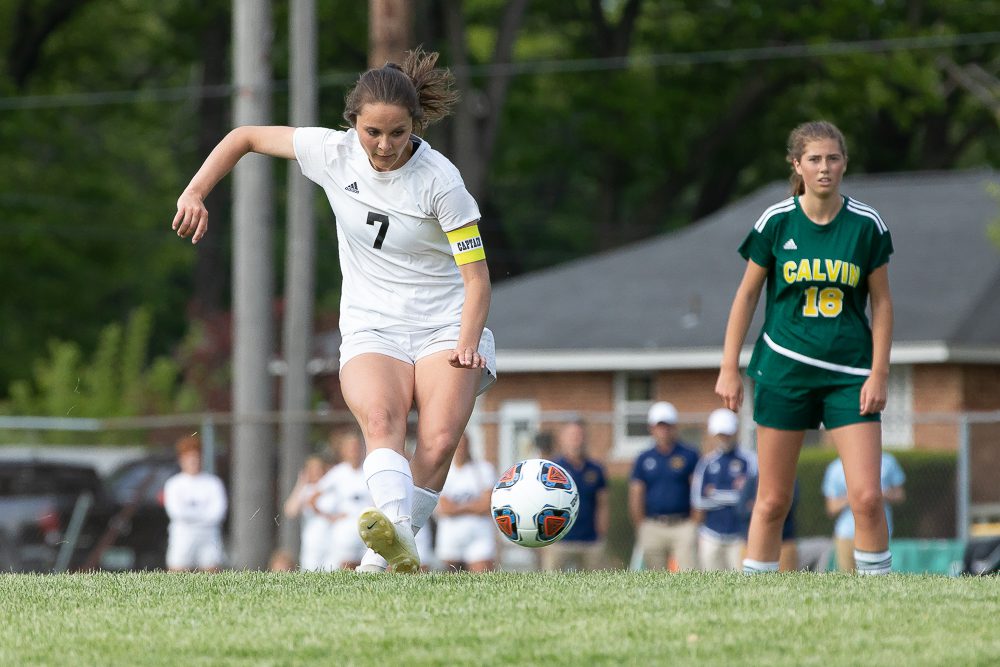 Sophie Mueller buries the ball in the net from the penalty spot for North Muskegon. Photo/Randy Riksen 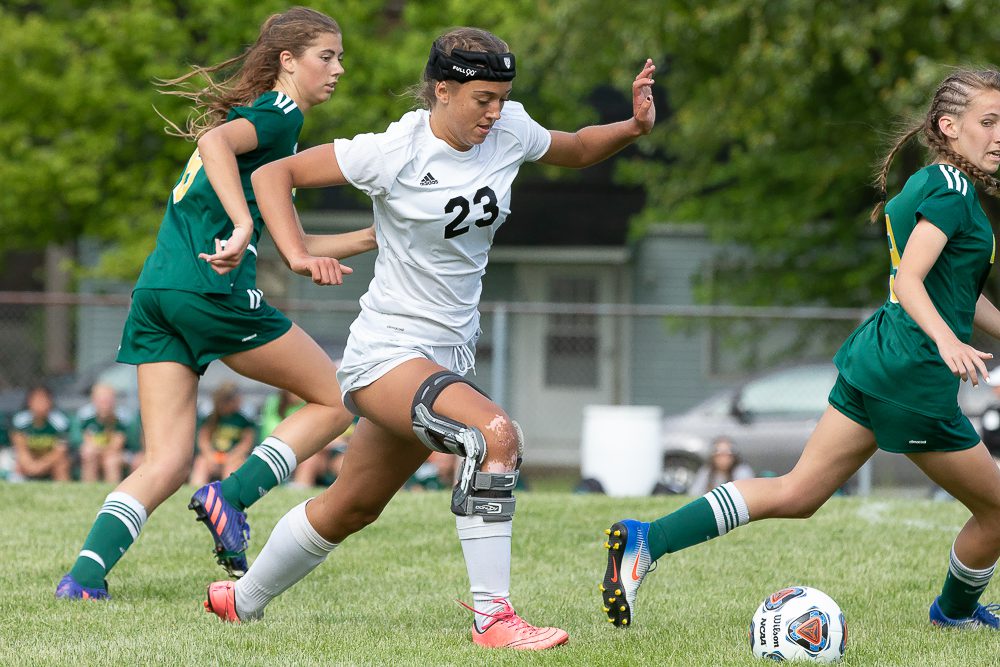 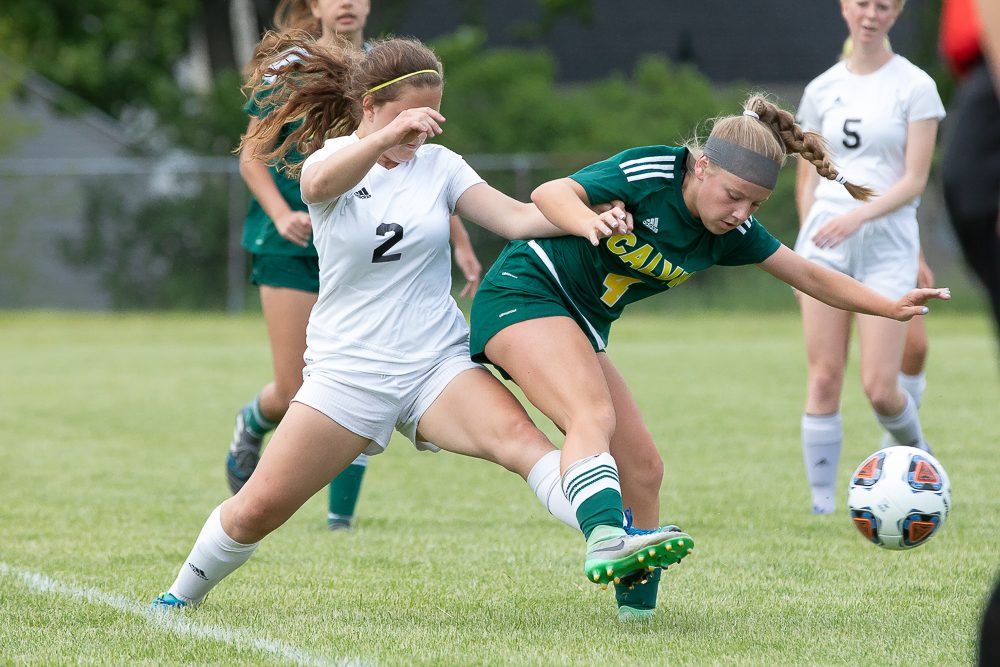