lleaped into the arms of her coaches with elation, because a major team goal had been accomplished.

As North Muskegon Coach Ryan Berends reminded the players after the game, the two regional trophies will be on display at the school for years to come, for them to visit and admire.

So the Norse decided to enjoy the moment. 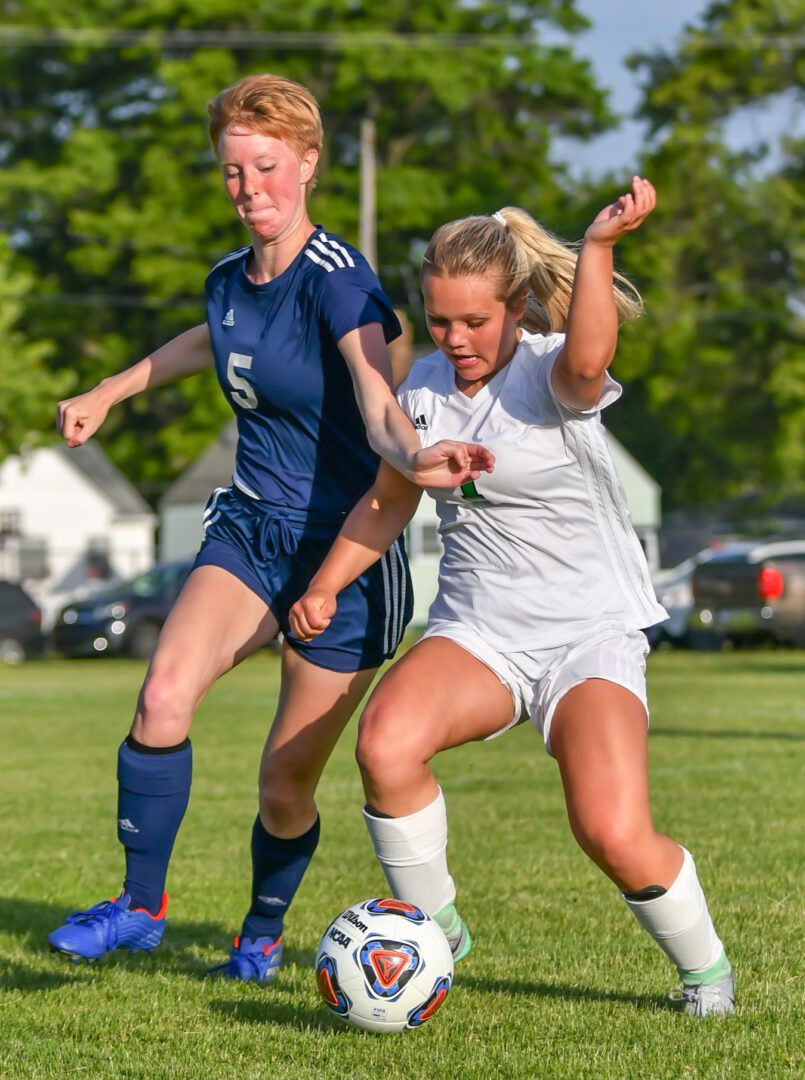 “When you’re on a team of girls that wants it this much, that fights for it this hard, you can’t help but have that energy and feel that hype,” said Mueller, North Muskegon’s leading scorer, when asked about her burst of enthusiasm after the game. “It’s contagious for everyone.”

But Mueller and the Norse want to make sure the regional title celebration is not their final one, like it was last year. They have one bigger goal in mind – a state championship – and that’s still two wins away.

The first challenge will be winning a state semifinal game next Wednesday at Comstock Park High School. They expect to face Kalamazoo Christian, which played Holland Black River in a regional final on Thursday.

Last year the Norse played Kalamazoo Christian in the semis and lost a heartbreaker in an overtime shootout. Both teams have most of their key players back this season, so if a rematch occurs, it should be a good one.

“We gave it our all and it just didn’t happen,” Mueller said about last year’s disappointing finish. “But we’ve been there, we thought we could have done it last year, now we know that we can this year. We have that mentality, we’re going to put everything we have out there and fight for it to the end.”

North Muskegon, now 20-2 on the season,  is certainly prepared for the challenge, based on its performance on Thursday.

The games are supposed to get tougher as teams advance farther into the tournament, but the Norse dominated Houghton Lake like they have most of their opponents all season.

Their powerful offense kept the ball in the Bobcats’ zone for most of the contest, and the Norse outshot Houghton Lake 16-4. 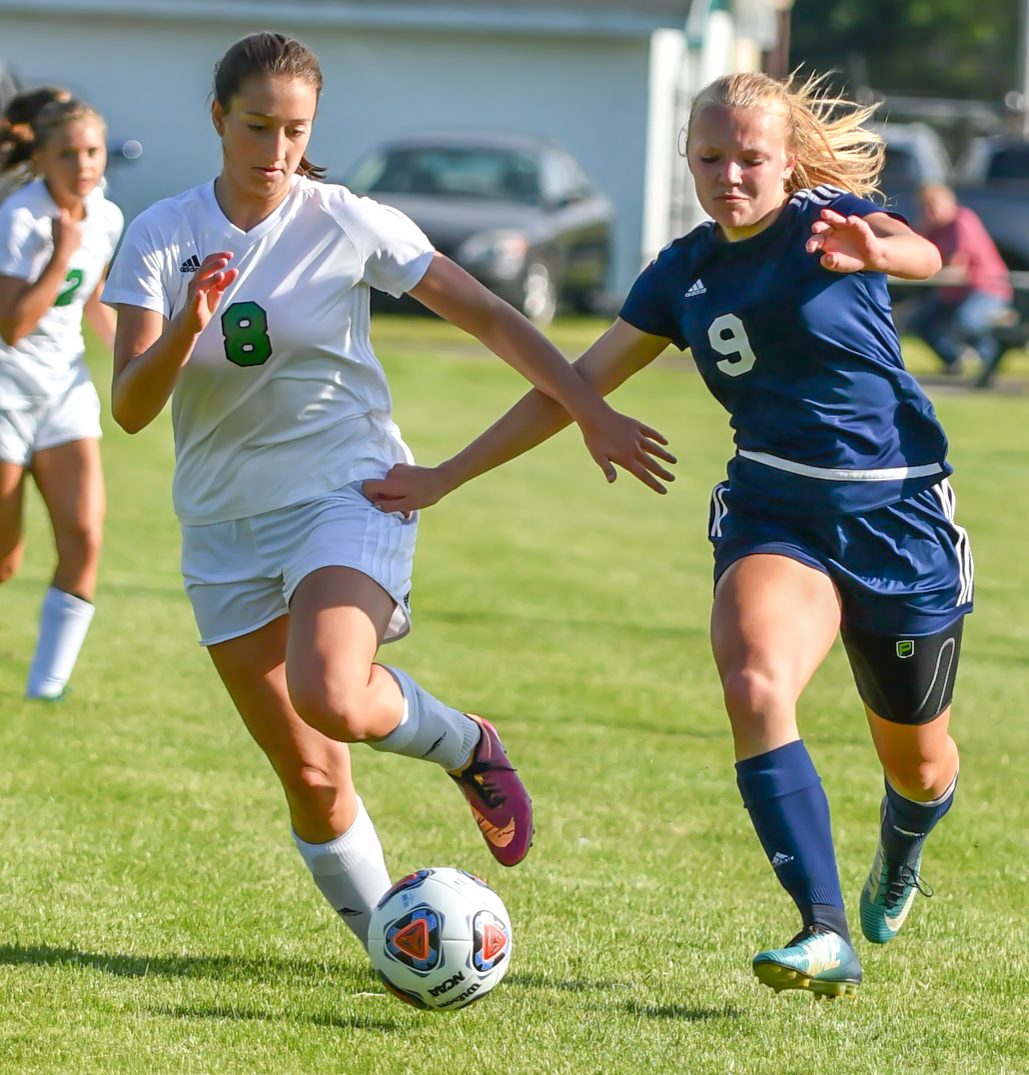 The margin of victory could have been greater, had it not been for a bunch of shots that went just a little too high or wide, or a bunch of great saves by Bobcats goalkeeper Ellie Connett.

When asked how his team can keep rolling past opponents this far into the state tournament, Coach Berends said it’s simply been a matter of hard work and improvement.

“We’re playing better than we did in the beginning of the season,” he said. “The girls have consistently practiced hard, and it shows every game. We have girls shooting at 55 percent conversion ratios, which is almost unheard of.

Houghton Lake had its best scoring opportunity about five minutes into the game when a player had a breakaway, but her shot hit the goalpost and bounced away.

The Norse put the ball in the next 6:20 into the first half, but the referees ruled that the play was offside, and the goal was disallowed.

But exactly two minutes later, Mueller weaved through defenders near the top of the box and ripped a shot that found the back of the net.

Emil Judd added a goal for North Muskegon from close range with 9:31 left in the first half, and the Norse led 2-0 at the break.

Less than three minutes into the second half, Mueller got the ball in the corner of the Bobcats’ zone and sent a scorching pass in front of the net. Hope Johnson took the pass and deposited the ball into the net, putting the Norse up 3-0.

The final goal came with 4:09 remaining when Gwenna Pitts found the mark.

North Muskegon goalie Syann Fairfield played for most of the game, except for a few minutes in the second half, when she had to come out following a collision with an opponent that left an ugly bruise on her face. 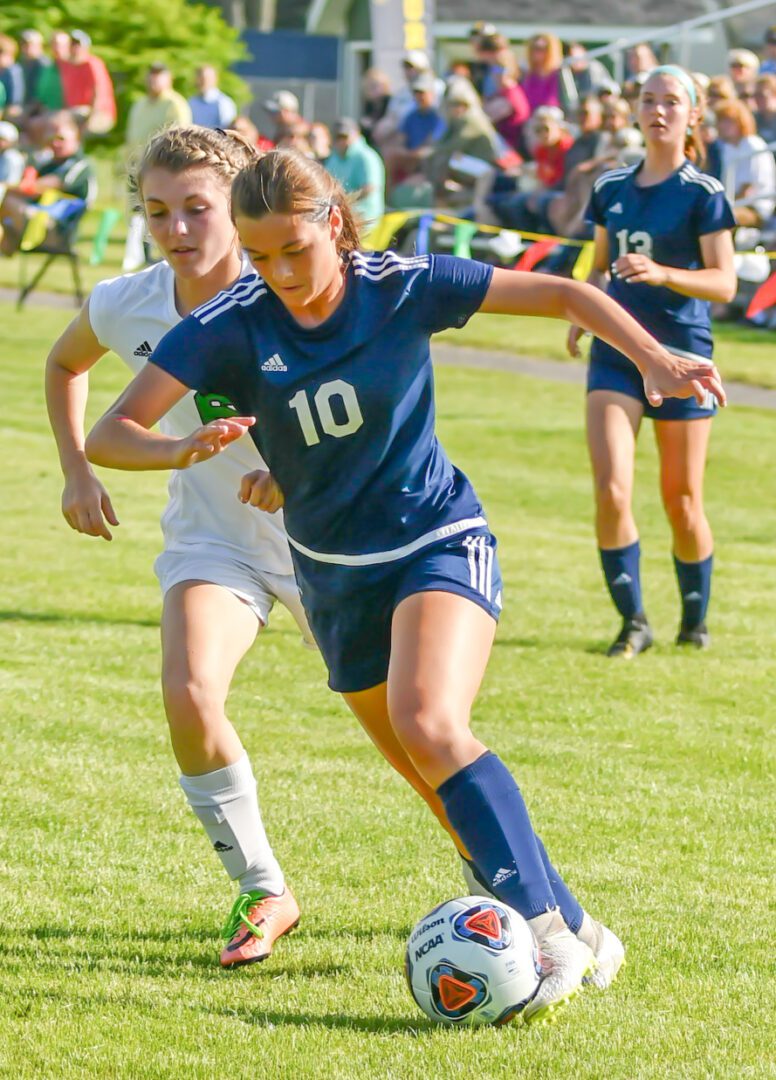 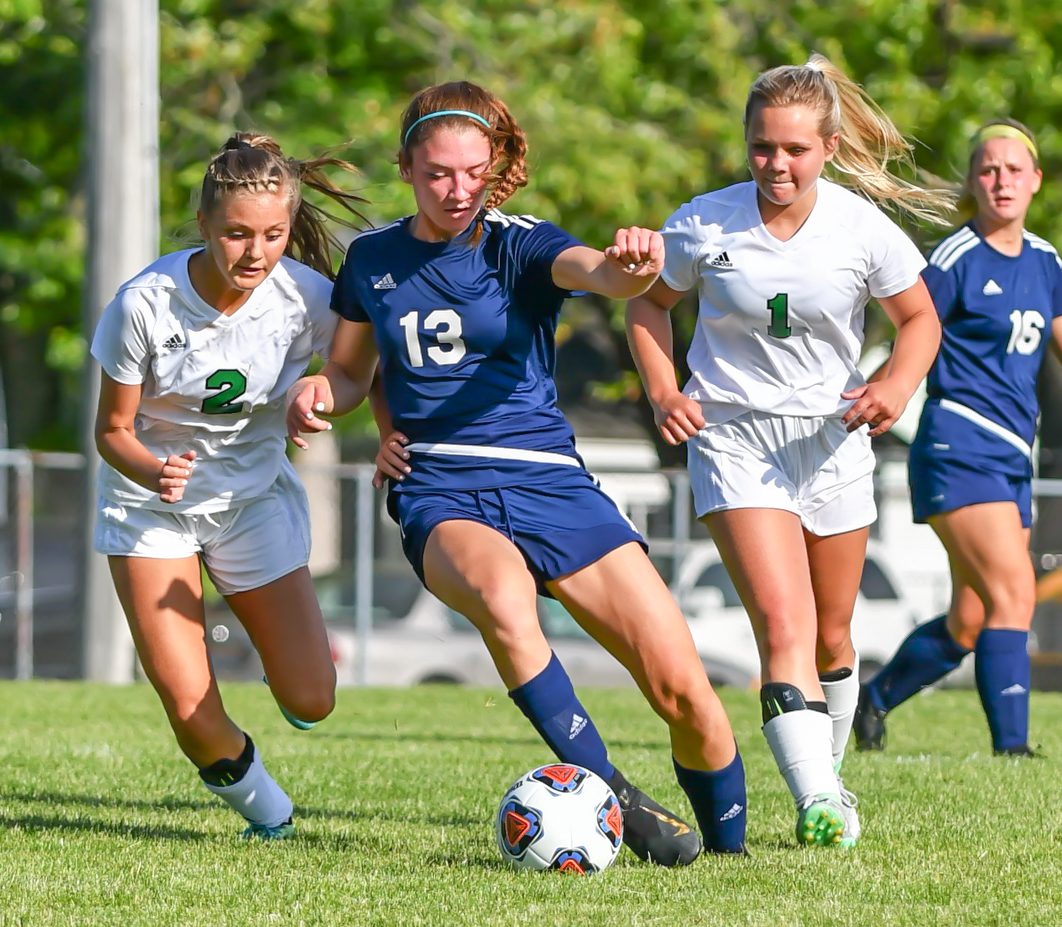 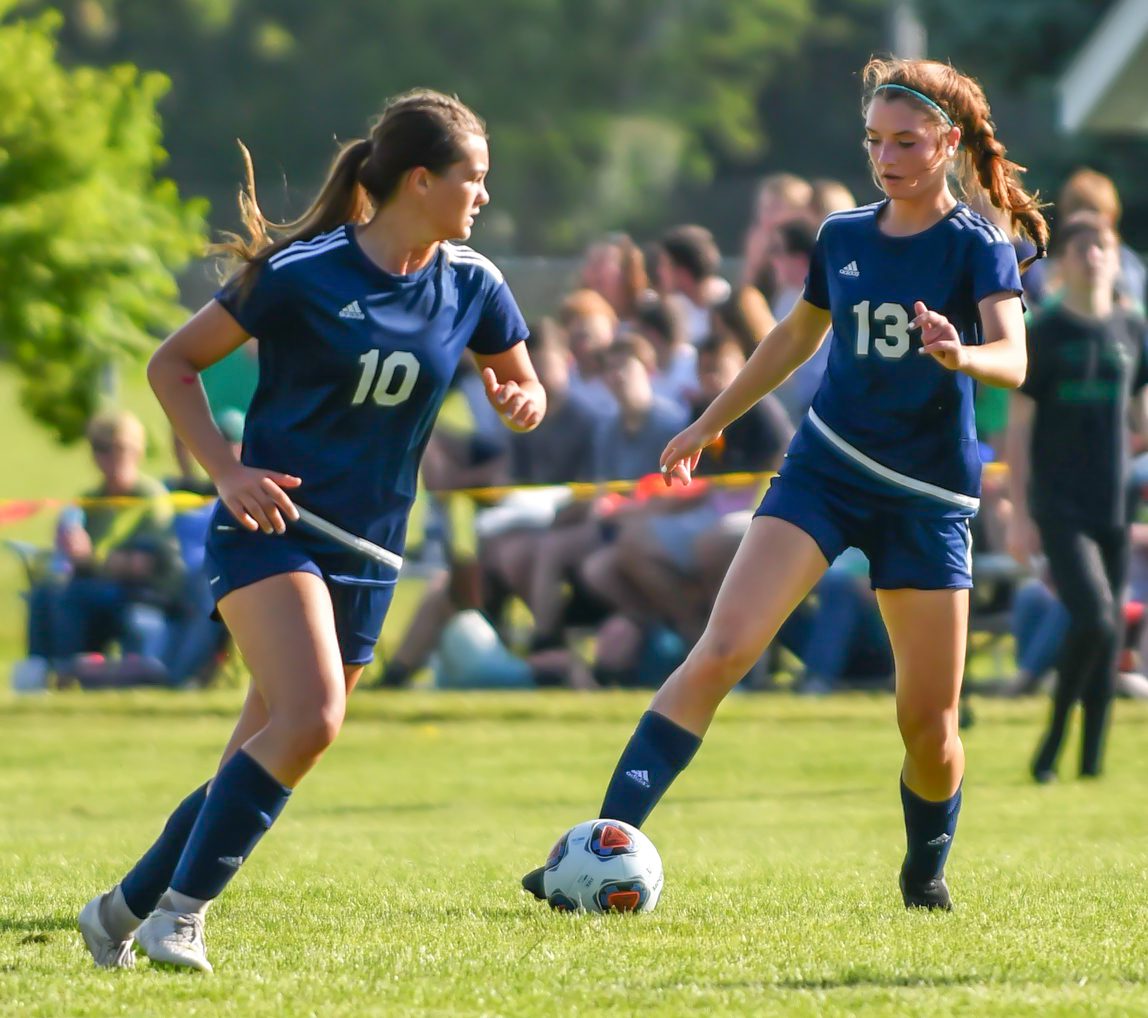 Sophia Schotts controls the ball as No. 10 Gwenna Pitts looks for the pass. Photo/Michael Banka 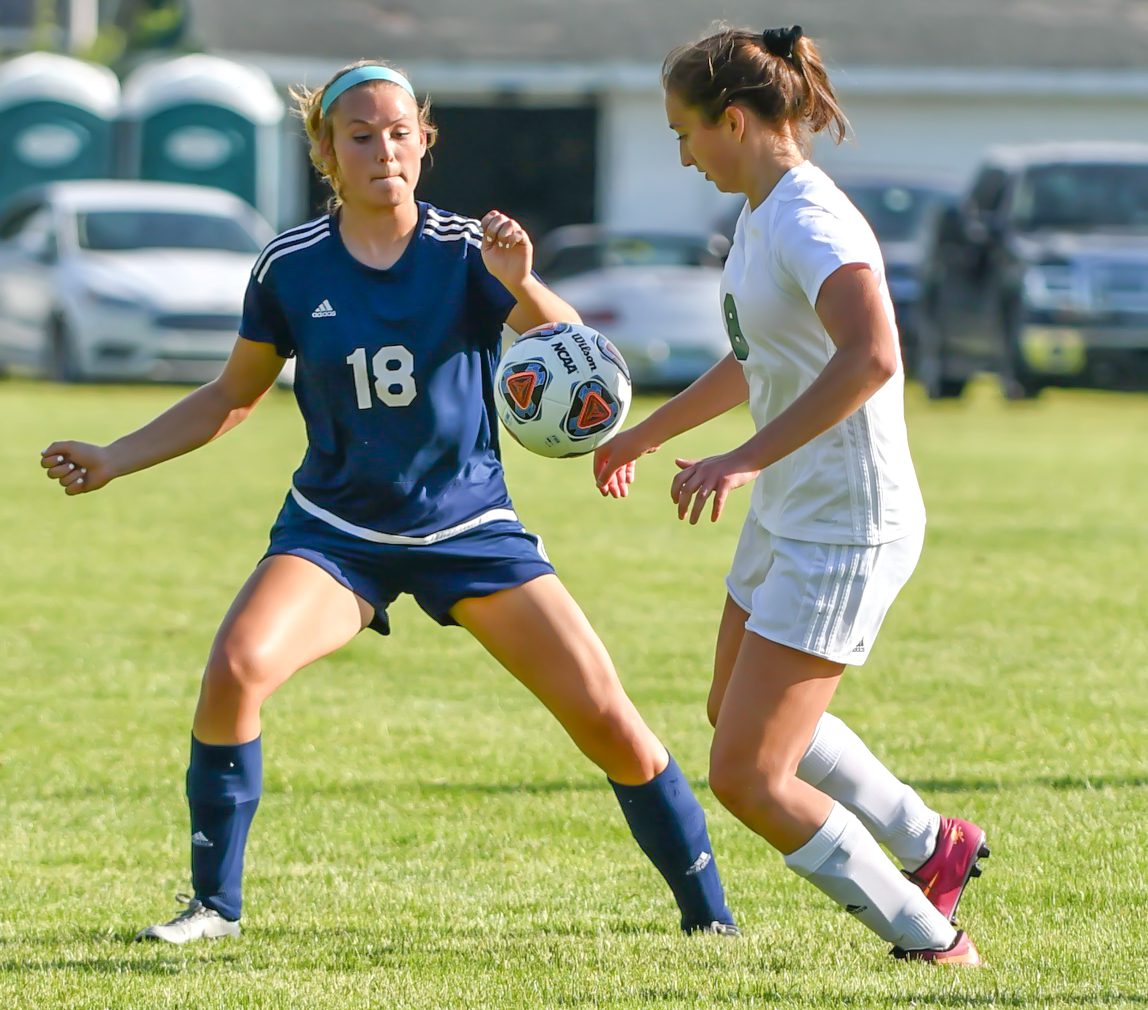 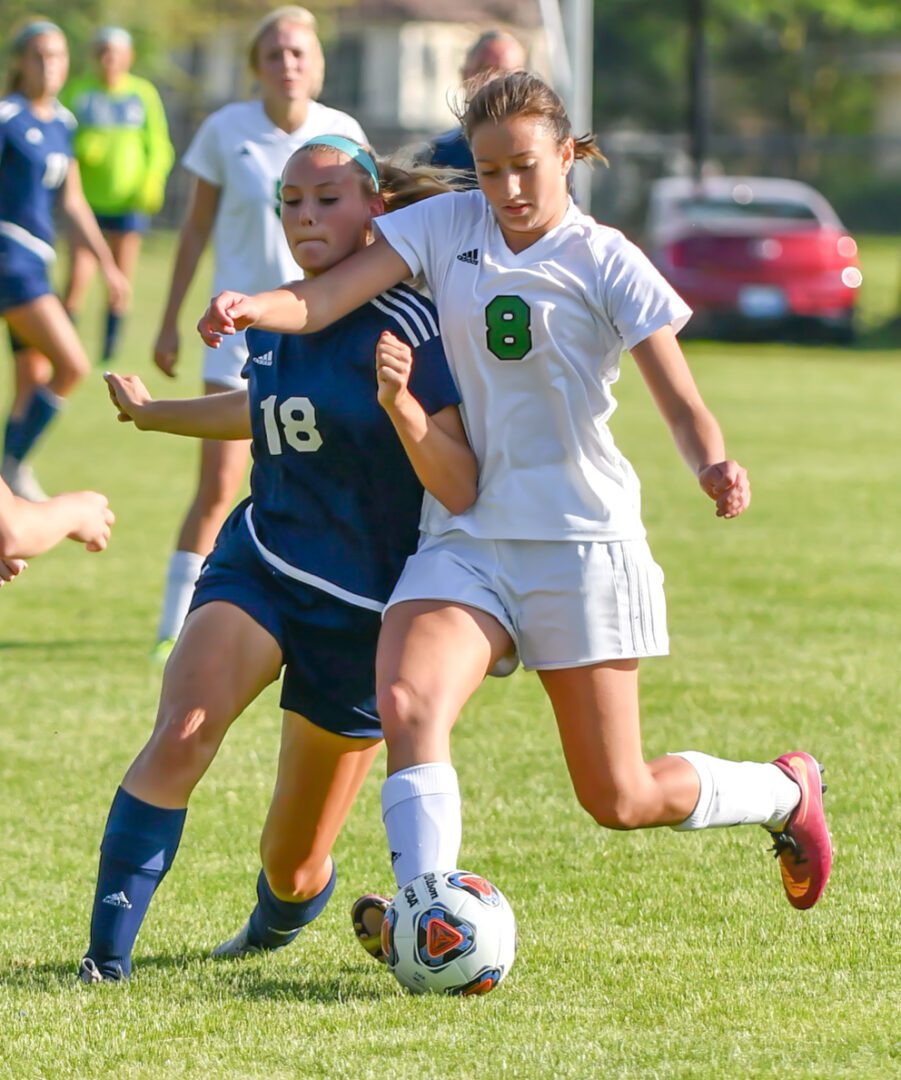 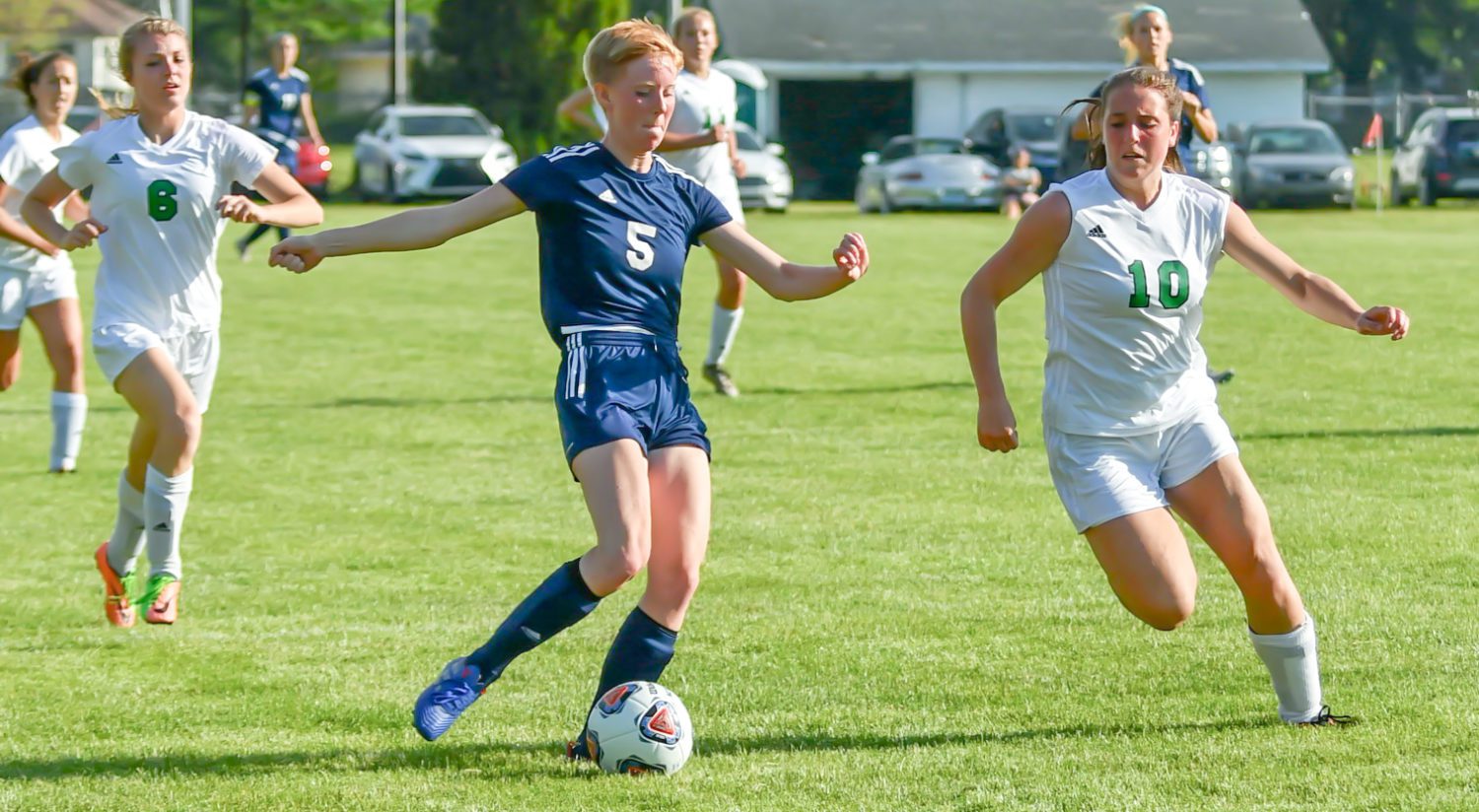 Grace Berends gets ready to send a pass for North Muskegon. Photo/Michael Banka 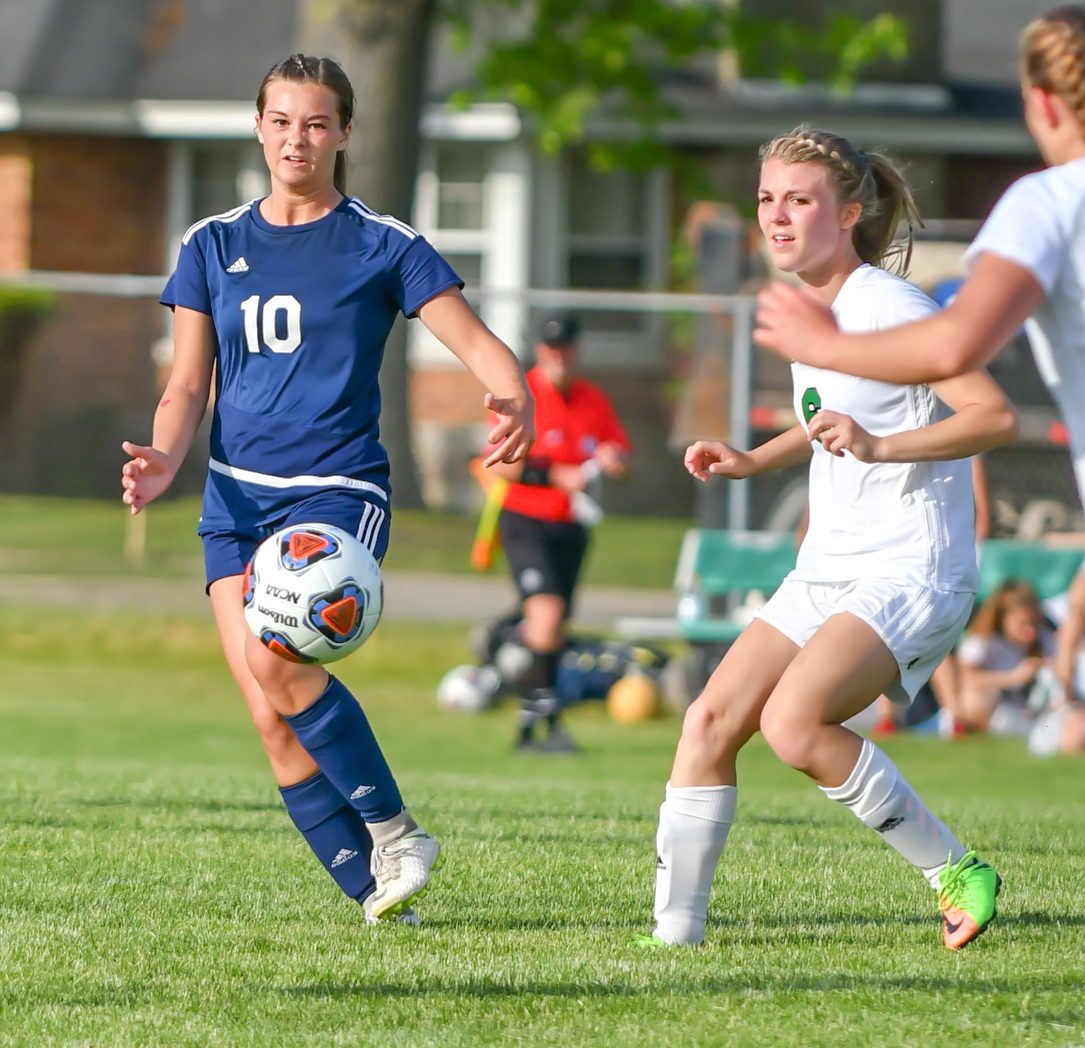 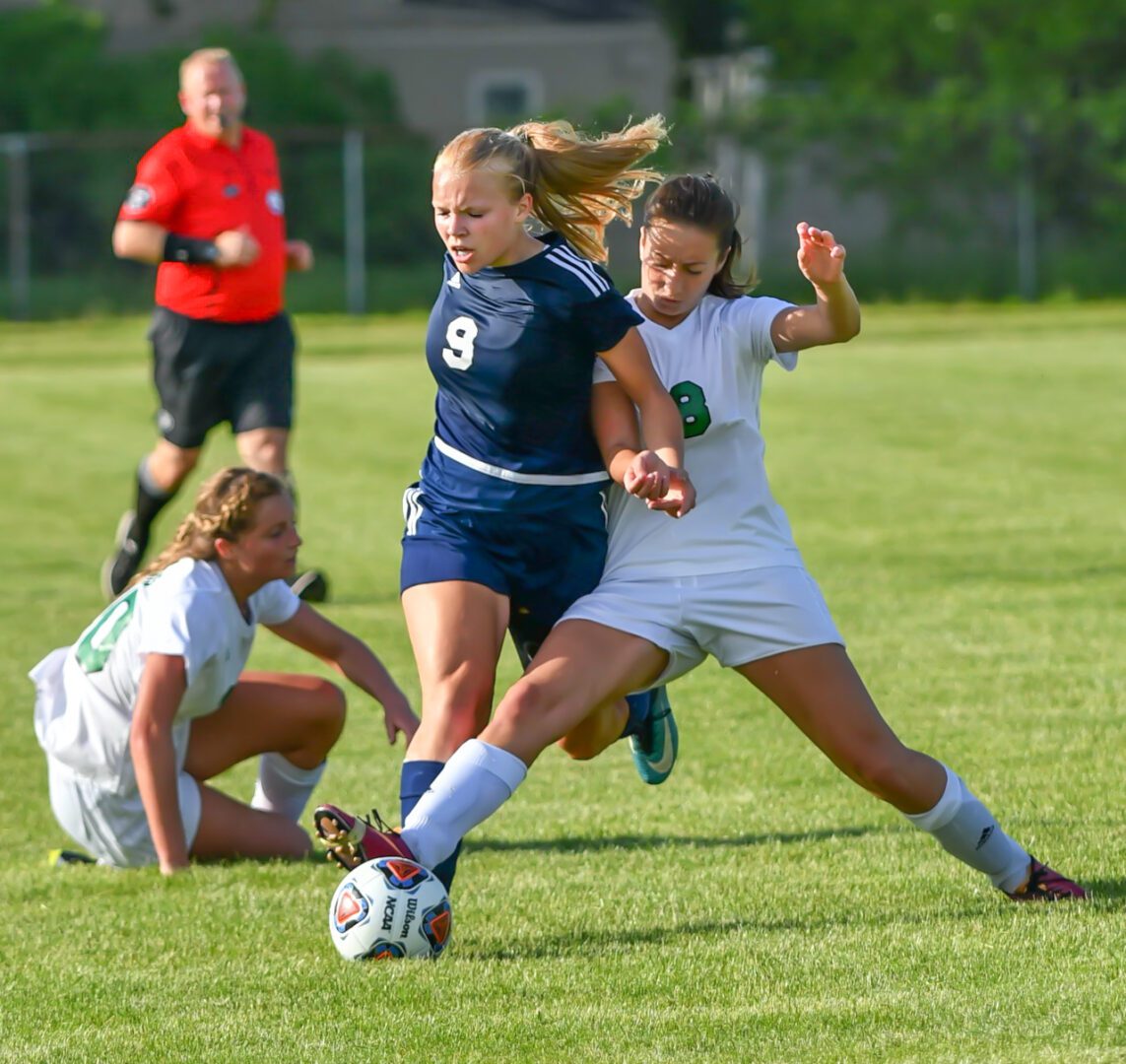 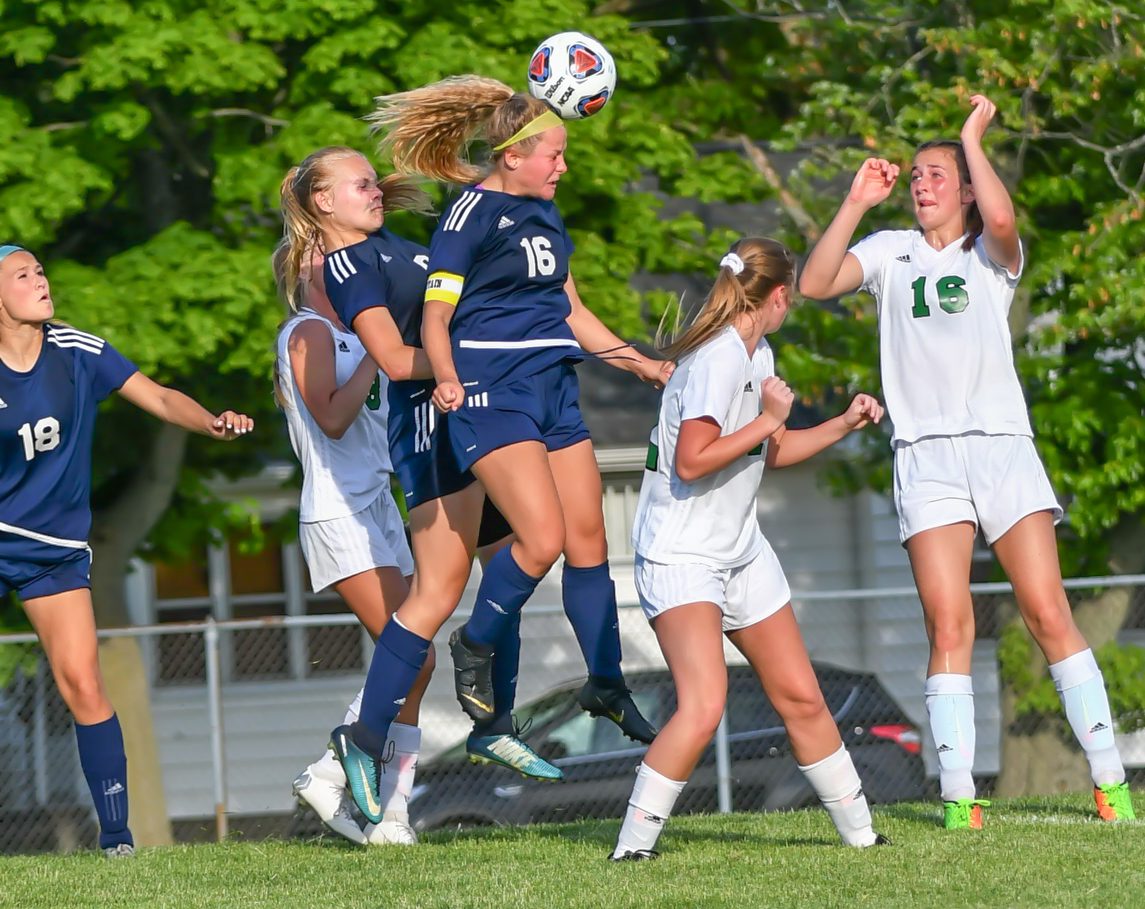 Kendal Hoppa gets up for the North Muskegon head ball. Photo/Michael Banka 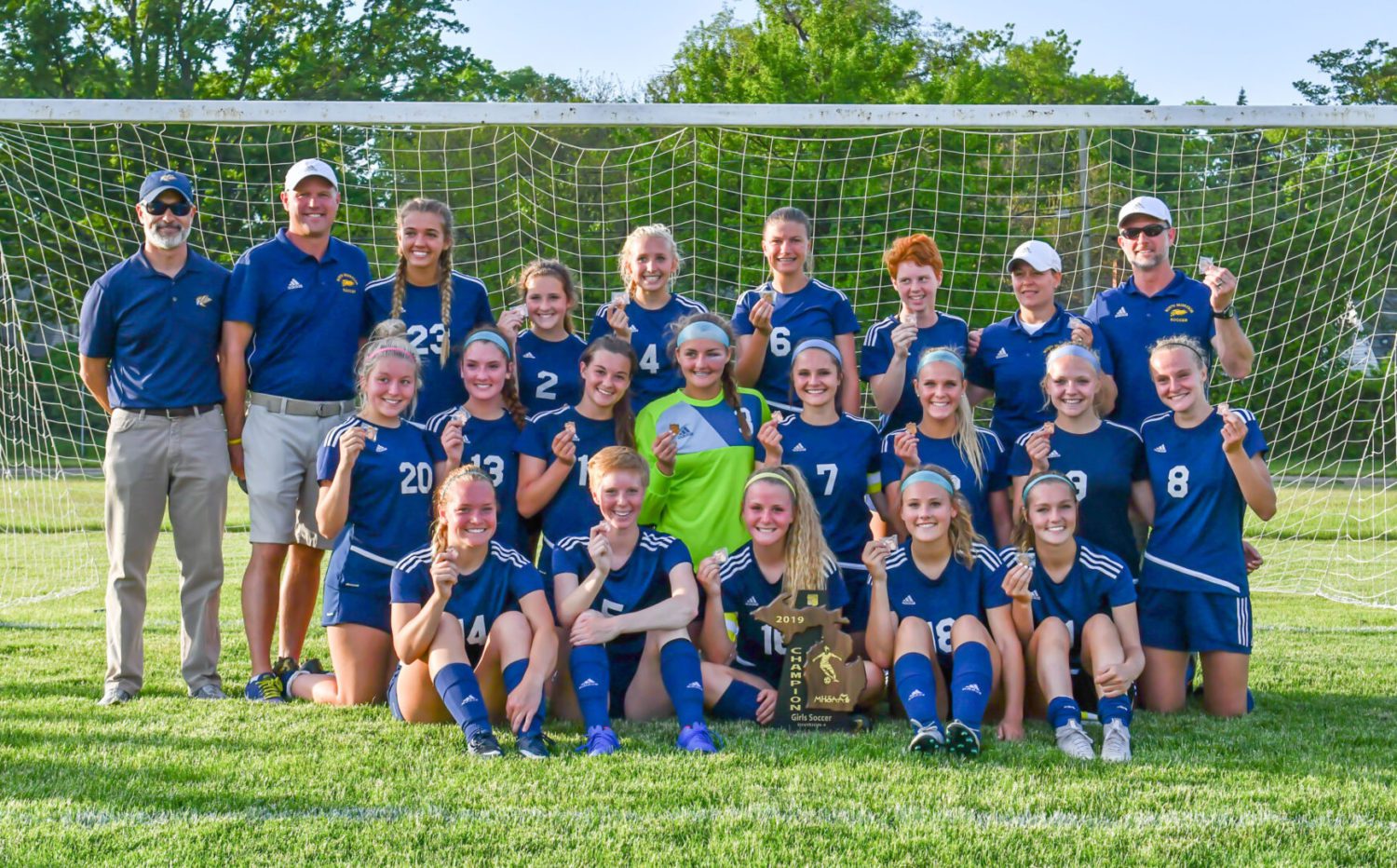