Holton boys hang tough with another quality opponent, then falter down the stretch

HOLTON — The Holton boys basketball team has shown the ability to play with the top teams in the CSAA Silver Division, but hasn’t been

able to get over the hump and grab that big win. 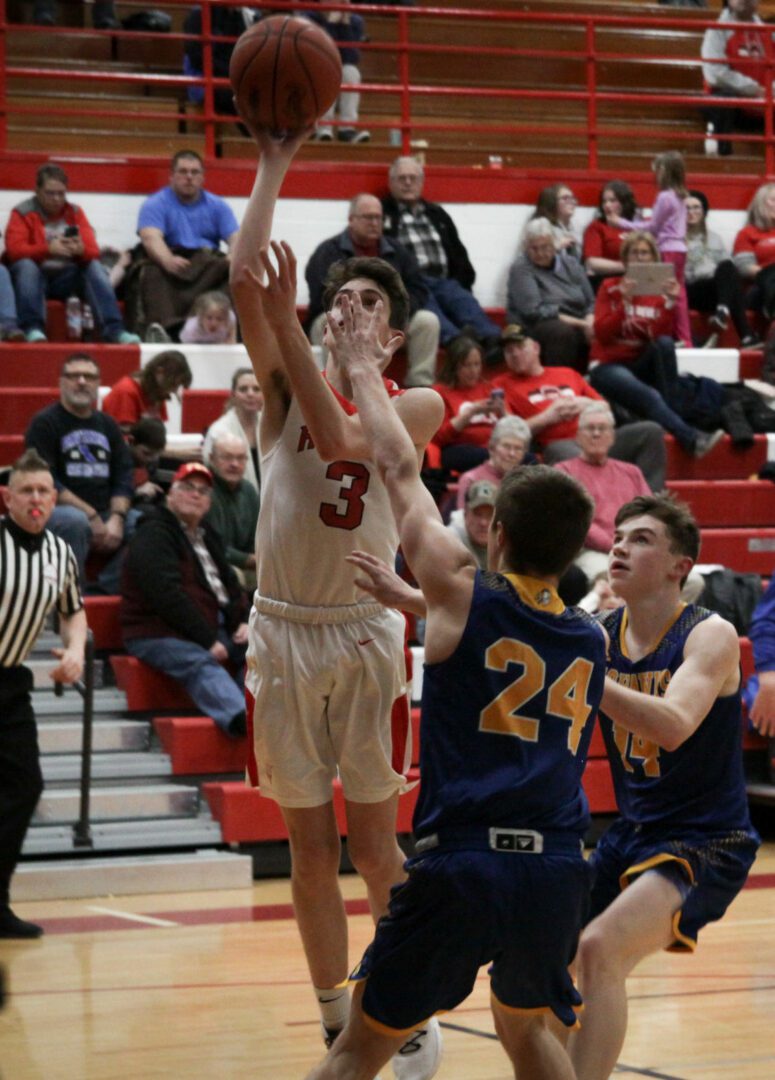 Holton sophomore No. 3 Wyatt Monette takes a shot in the lane. Photo/Beth Olson

That remained true on Friday, when the Red Devils once again hung tough against Morley Stanwood, but fell short in the final minutes of a 43-35 loss.

The game was tied 33-33 with 3:51 remaining, but the Mohawks closed with a 10-2 run — including the game’s final seven points — to claim the conference win.

“(Morley Stanwood) wanted it more,” said Holton coach Luke Houseman. “With every team that we’ve lost to this year, we’re right there, but haven’t been able to get over that hump.

“They’re great kids, we’ve just got to figure out a way to get over the hump. We’re capable of  doing it. It’s up to them, we’ve got to get it done.”

Holton fell to 8-6 on the season and 4-3 in the CSAA Silver standings. Morley Stanwood is now  13-1 overall and 6-1 in the division, trailing first-place Kent City by one game.

“This was a game that was potentially for our conference championship, or at least second place in the league,” Houseman said. “I don’t feel like my kids came out with the energy and the effort level that it takes to be a champion.”

The Red Devils tied the game 33-33 on a free throw by Nathan Slowik with 3:51 to play, but Morley Stanwood responded with a three-pointer from Carter Veldkamp with 3:21 left to pull back ahead for good. 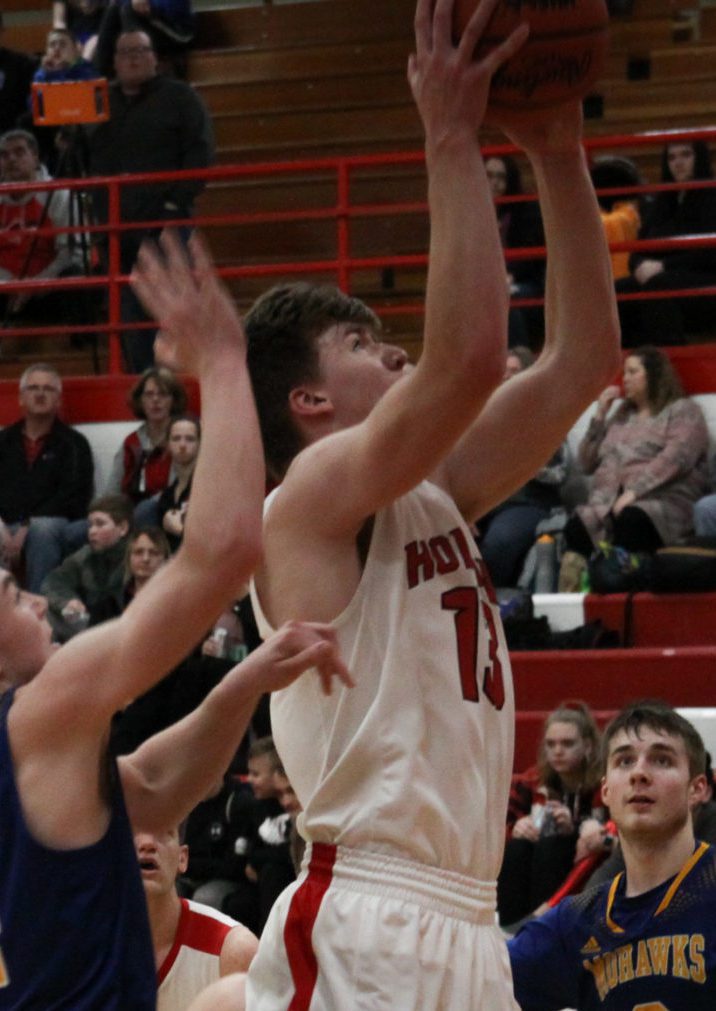 Lukas Ramackers goes up for a shot under the hoop for Holton. Photo/Beth Olson

Slowik scored on the next Holton possession to pull his team within 36-35 with 2:55 to play, but the Red Devils didn’t score the rest of the way.

Aiden McLaughlin’s bucket put the Mohawks up 38-35 with 2:06 remaining. Holton didn’t score on its next possession. After a defensive rebound, Morley Stanwood went to the free throw line for seven consecutive attempts.

The Mohawks made four of those shots in a span of 22 seconds, got the rebound on each of the three misses, and extended the lead to 42-35. The visitors tacked on one more free throw with 17 seconds left.

“We didn’t box out well and we didn’t rebound well,” Houseman said. “You’ve got to be playing with every ounce of energy, every last little bit of effort you have in your body to get those rebounds. We didn’t come up with any of them. Quite frankly, when you do that, you deserve to get beat.”

The Red Devils grabbed the edge in the third quarter and led 28-25 heading to the final stanza. Holton extended its lead to five points on a basket by Slowik to open the fourth, but was outscored 18-5 the rest of the way.

Slowik and Drew Trygstad paced Holton with nine points each. Lukas Ramaekers scored seven points and pulled down 10 rebounds off the bench. Monette finished with six points and Aidan Poling had four points and nine rebounds for the Red Devils.

Woolworth led the Mohawks with 19 points, including four triples. McLaughlin scored 10 points and had 10 rebounds.