MUSKEGON – It’s one thing to lose a hockey game.

It’s quite another to lose on your home ice to close out an otherwise great season.

The Reeths-Puffer hockey team was not going to let that happen.

The Rockets trailed after one period on Wednesday, then got their act together and gutted out a 3-1 victory over Traverse City West in the Division 1 regional championship game at Muskegon’s Mercy Health Arena. 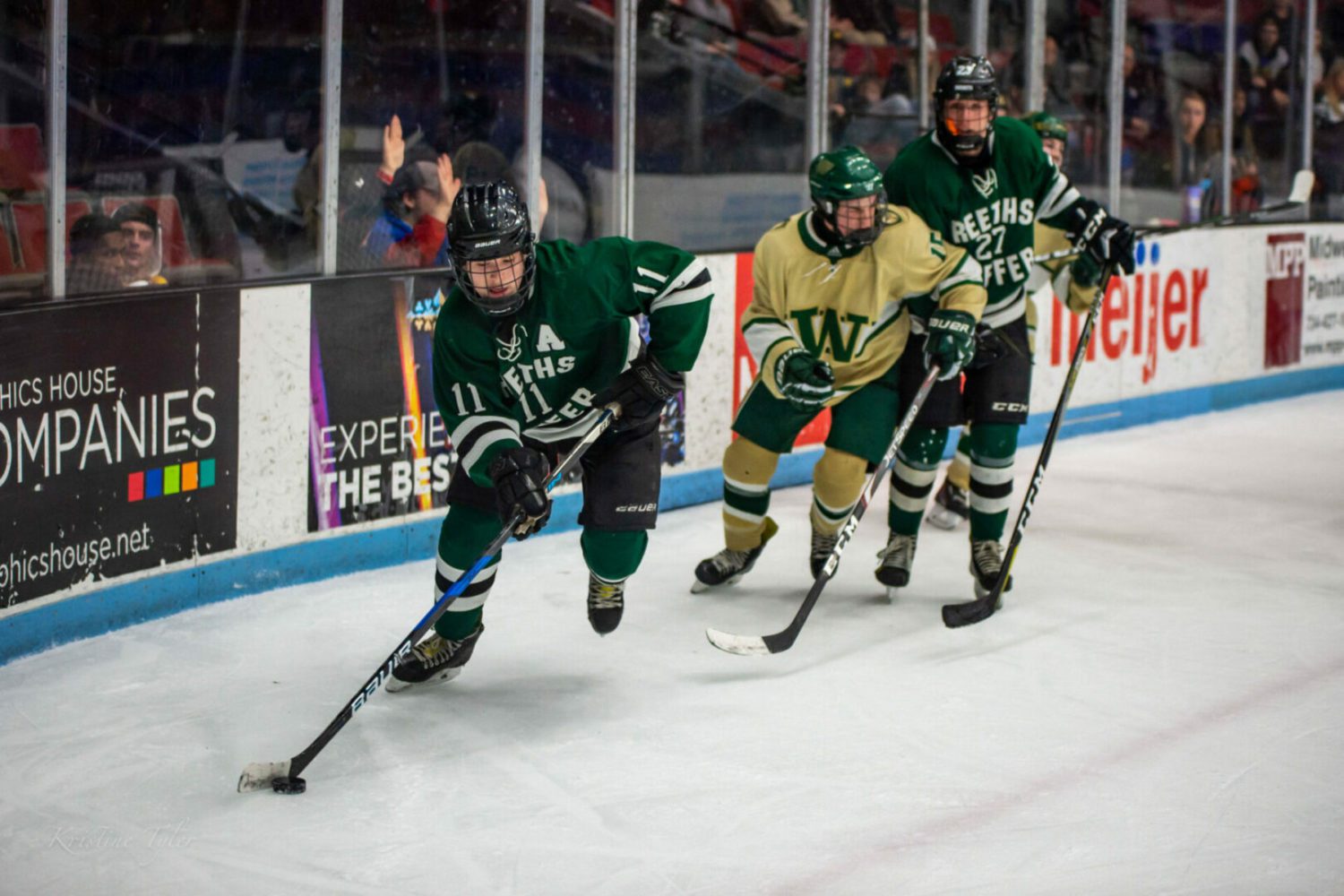 Quinn Fowler moves the puck along the boards for Reeths-Puffer. Photo/Kristine Tyler

Team captain Nolan Convertini was the hero of the contest, playing a role in all three goals. He had an assist on the game-tying goal in the second period, then scored twice in the third to put the Rockets over the top.

Reeths-Puffer, which has now won seven of its last eight games, improved to 18-7-2 on the season. The Rockets now advance to the state quarterfinals against conference rival Byron Center at Ferris State University on Saturday at 1 p.m.

The Rockets will be looking for some revenge in the game. They lost their only matchup this season against Byron Center, 4-3 in overtime, on Feb. 14.

“We just said ‘stick to the process,’” said Reeths-Puffer Coach Bill Zalba. “Stick to the process of what has worked and what got us here all year. My players just buy in. Everyone has bought in this year, and everybody understands that this is a ‘we’ thing, not an ‘I’ thing. It’s just amazing to see where we’ve come.” 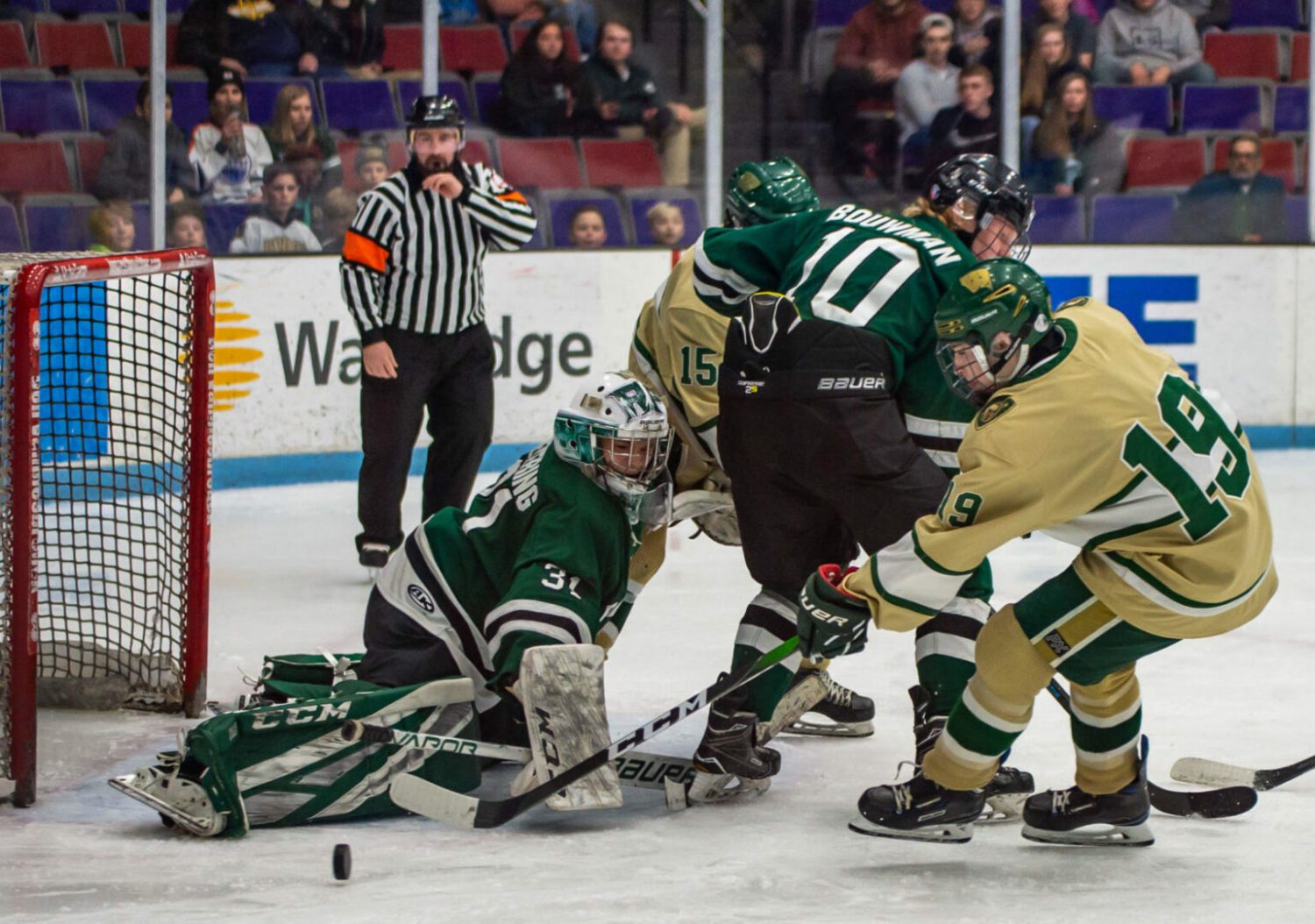 But the Rockets didn’t stay down for long.  Navarre Klint scored a power play goal at the 3:30 mark of the second period, with assists from Convertini and Matt Herniman, just five seconds into the man advantage. The score was tied 1-1 after two periods.

Convertini took care of the rest in the third period.

He gave Reeths Puffer a 2-1 advantage when he scored with 11:19 left in regulation. Klint and Dylan Stawski tallied assists. Then Convertini finished things off with an empty-net goal with 19 seconds remaining on the clock, after Traverse City West had pulled its goalie for an extra attacker. Herniman was credited with an assist.

Reeths-Puffer goalie Nick Meyering made several big saves down the stretch to preserve the lead and keep the Rockets’ season alive. He finished with 25 saves on 26 shots.

“Nick Meyering, I can’t say enough about him,” Zalba said. “He is by far the MVP of this team. He’s by far our backbone and has been unbelievable this season.”

The coach said his team’s unselfish play, with lots of guys stepping up when needed,  is the reason the Rockets are two wins away from playing in the state championship game.

“Guys step up in certain situations,” the coach said. “Nolan Convertini. Chris Hawkins. I don’t know where we would be without that kid. Navarre Klint has gone from scoring five points the last two years to having over 40 points this year.”

Hawkins’ contribution was evident throughout the physical contest. He’s not the biggest guy on the rink, but he dished out multiple hits in the game to help his team win and advance in the tournament.

“He’s always out there grinding,” Klint said about Hawkins. “I just love his work ethic. He gives it his all every single time.” 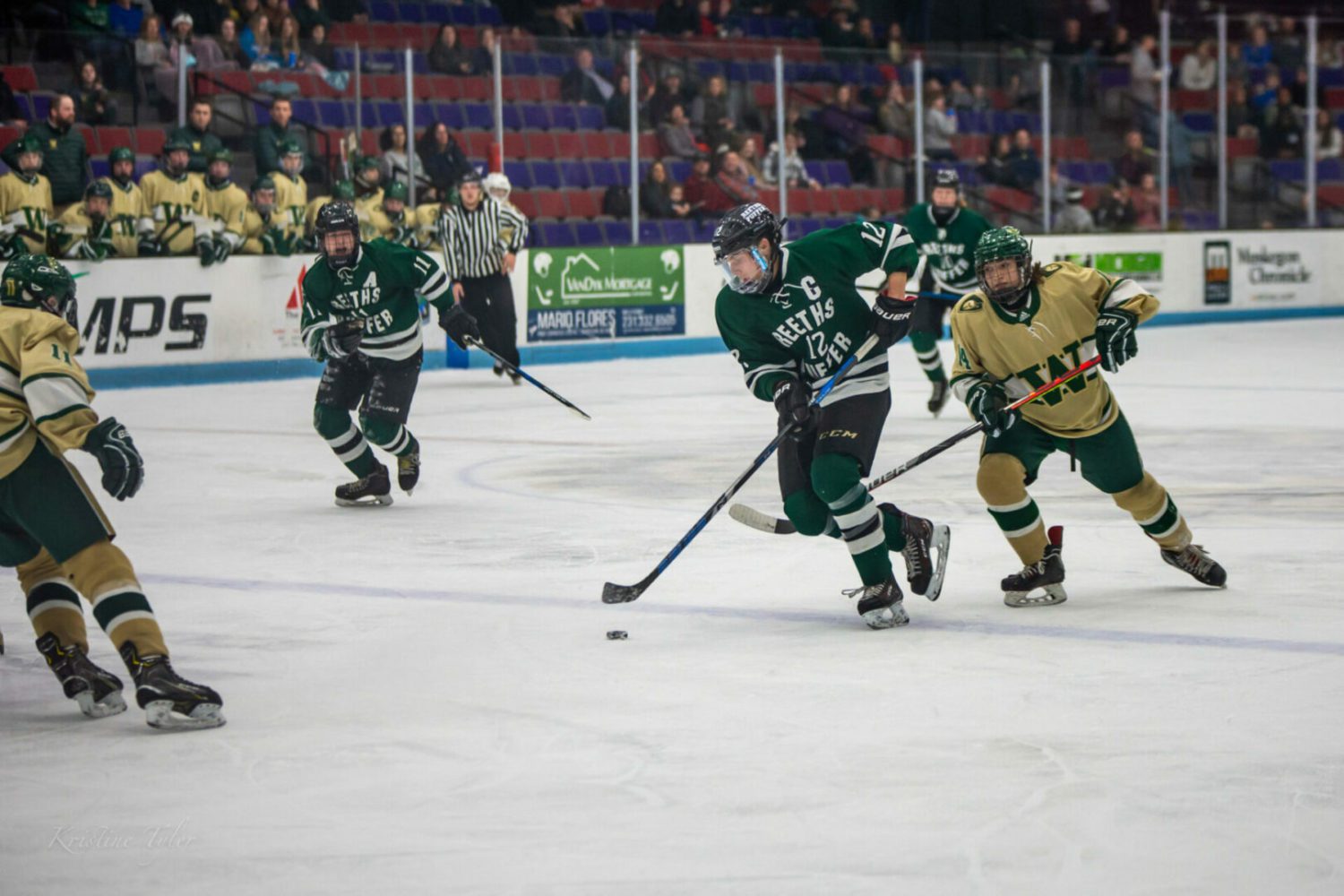 Nolan Convertini moves the puck across the blue line for Reeths-Puffer. Photo/Kristine Tyler 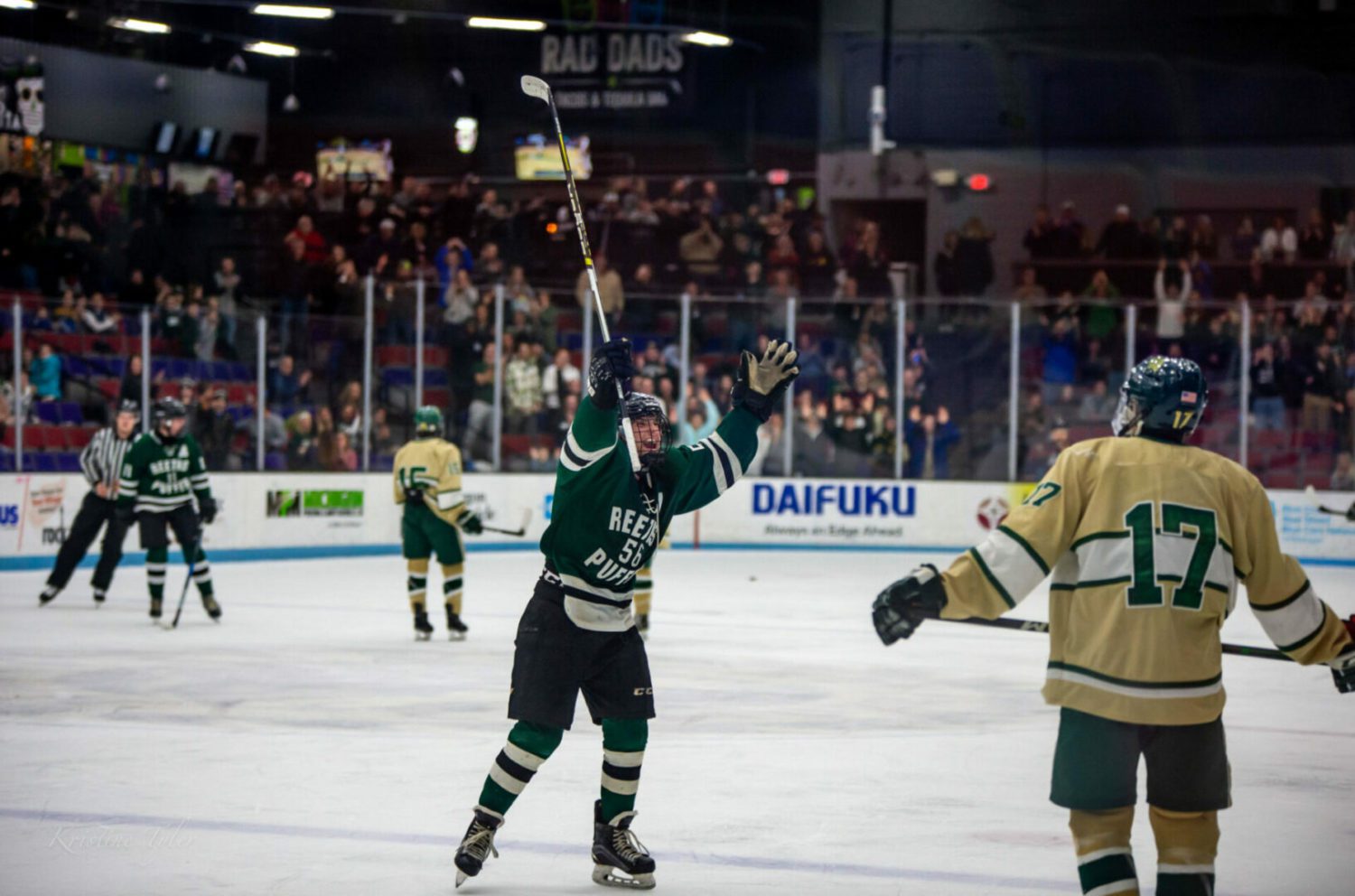 Matt Herniman celebrates on the ice after a Rocket goal. Photo/Kristine Tyler