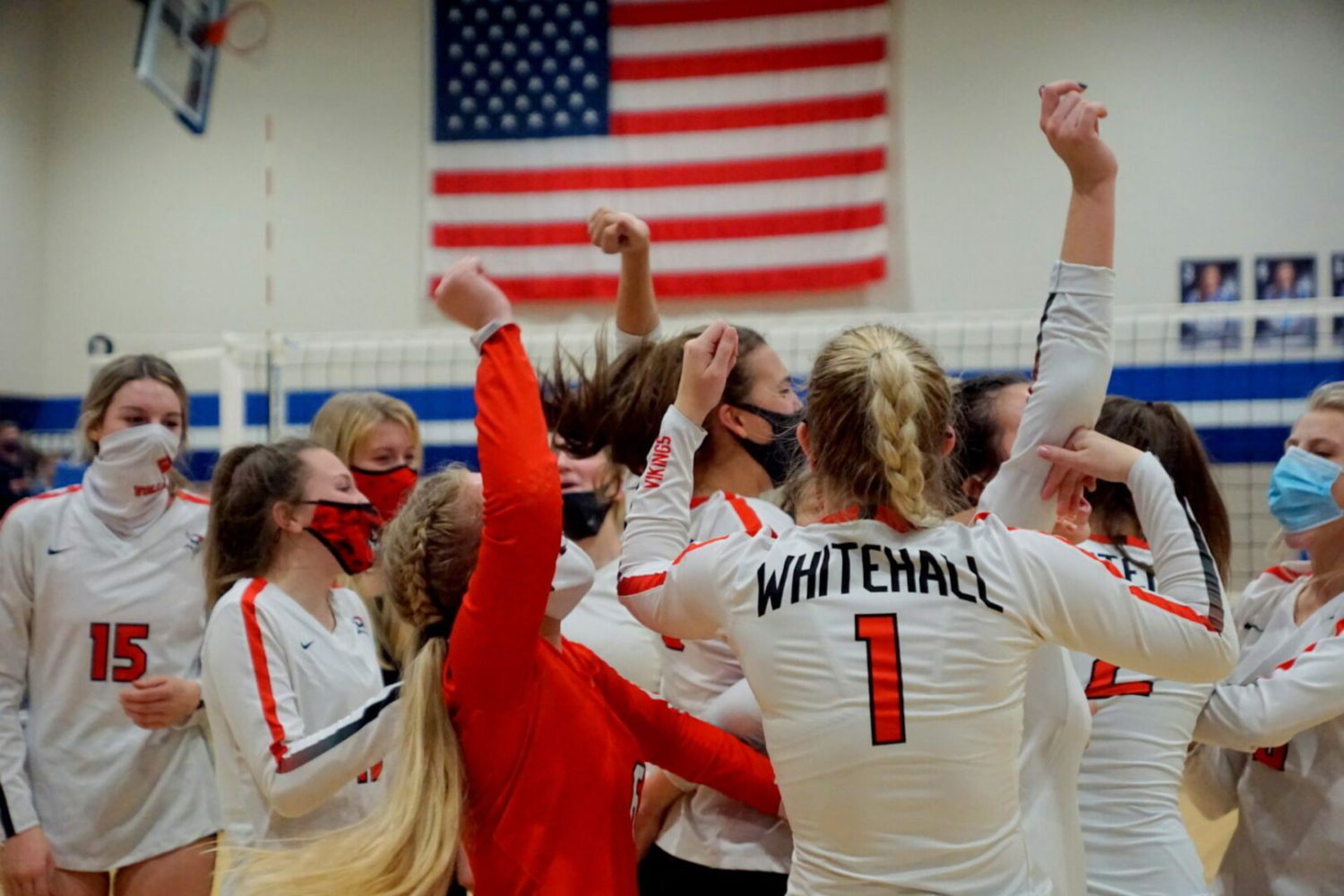 EGELSTON TOWNSHIP – There’s something very unpredictable about the Whitehall-Montague neighborhood rivalry, regardless of the

sport or the circumstances.

One team might be having a great season with state championship aspirations, while the other might be experiencing an up-and-down year. 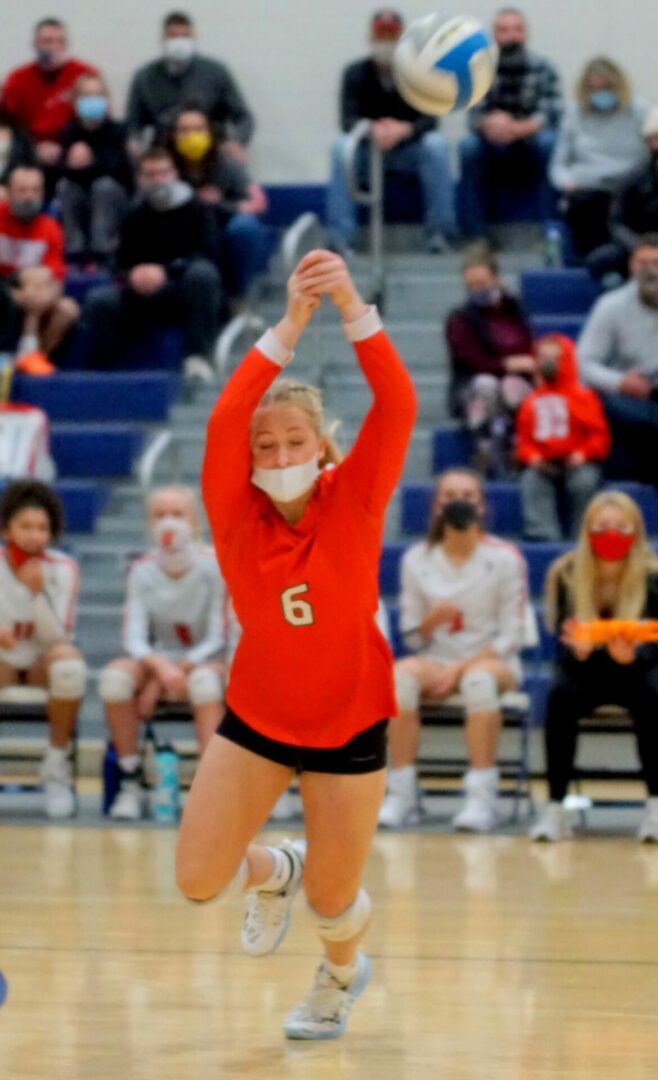 But when they go nose-to-nose, shocking outcomes sometimes occur.

That was certainly the case on Thursday night, when the Whitehall volleyball team, which finished third in the West Michigan Conference this season, stunned Montague, the seventh-ranked team in the state, 3-1 in the Division 2 district championship match at Oakridge High School.

Nobody would have guessed that the Vikings would get the best of the highly-touted Wildcats, who swept them 3-0 in their regular season matchup.

Even when Whitehall won the first set, most fans were probably thinking it was a nice start for the Vikings, but mighty Montague would take care of business as the match progressed.

The Wildcats did bounce back to win the second set, but the Vikings maintained their composure, played their best volleyball of the season, and rallied to win the third and fourth sets to claim the district championship trophy.

The victory was special for veteran Whitehall coach Ted Edsall, who is now in his 30th season with the program. He says his teams have won four or five district titles in his career, but he couldn’t remember the last one off the top of his head.

“Our theme has been control what you can control – energy and effort – and nobody played harder than we did tonight,” Edsall said. “When you have that mindset, something like this can happen, When we won that first game, I looked at my assistant and said we may have a special night tonight.” 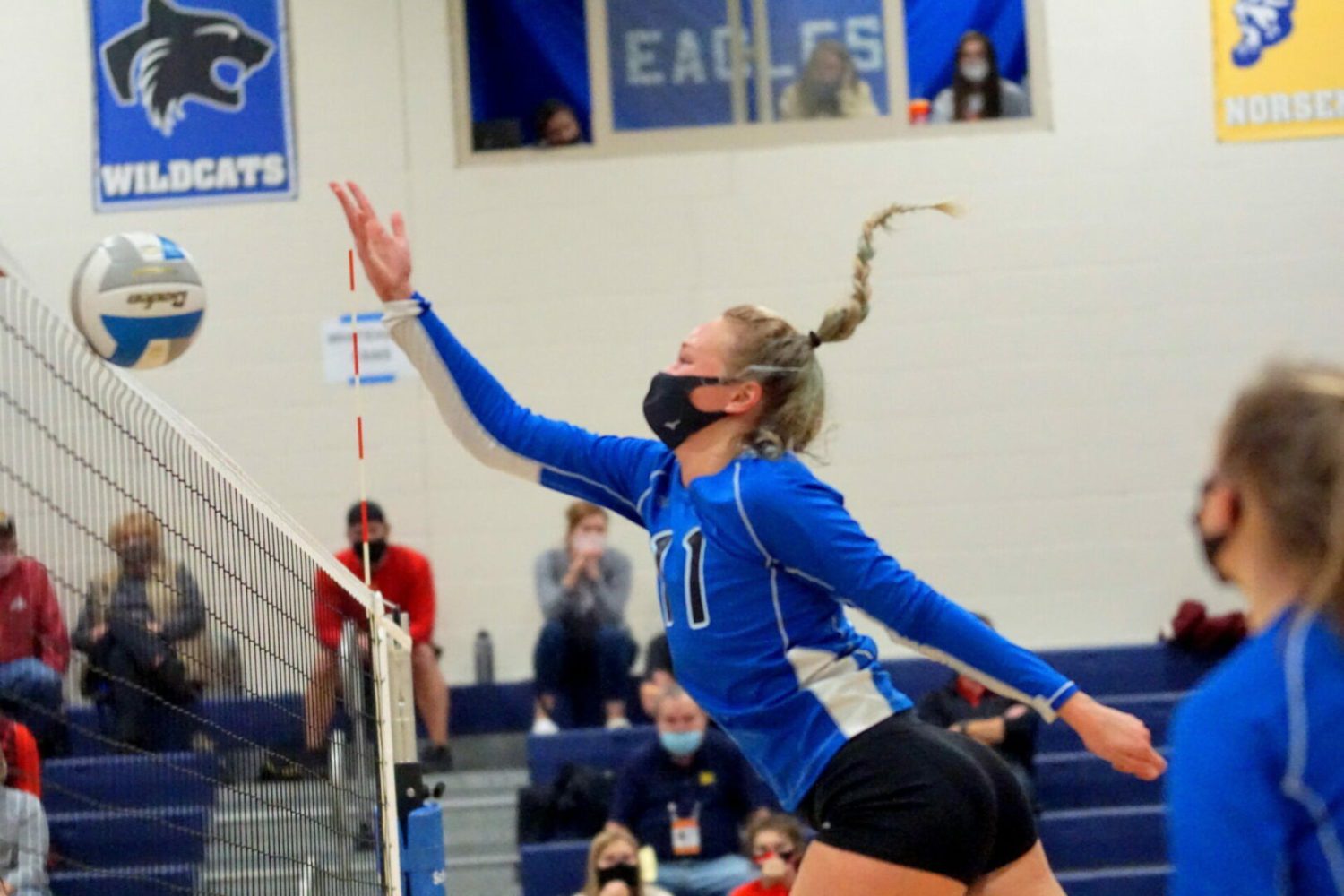 Allison Hall makes a play at the net for Montague. Photo/Leo Valdez

There were several stars for Whitehall, but none were bigger than junior Maggie Evans, who had an incredible game at the service line.

Her biggest moment of the night, and perhaps her prep volleyball career to this point, came in the fourth and final set, with the Vikings clinging to a 5-4 lead, and everyone expecting Montague to rally and reclaim control at any moment.

Evens served nine straight points, including three straight aces in the middle of the run, to give Whitehall a 13-5 lead that it never surrendered on its way to clinching the title.

“It’s never happened like that before,” Evans said about her amazing service run. “I just took a couple breaths each time and just focused on getting it in, We came in just having fun, knowing it could be the seniors’ last game, and we played for them.”

There were other standouts for the Vikings as well, including senior Charlie Baker and sophomore Kaydence King, who had 11 kills apiece; junior Ryleigh Mott, who had 16 digs; and junior Mylee Boyd, who totaled five blocks. 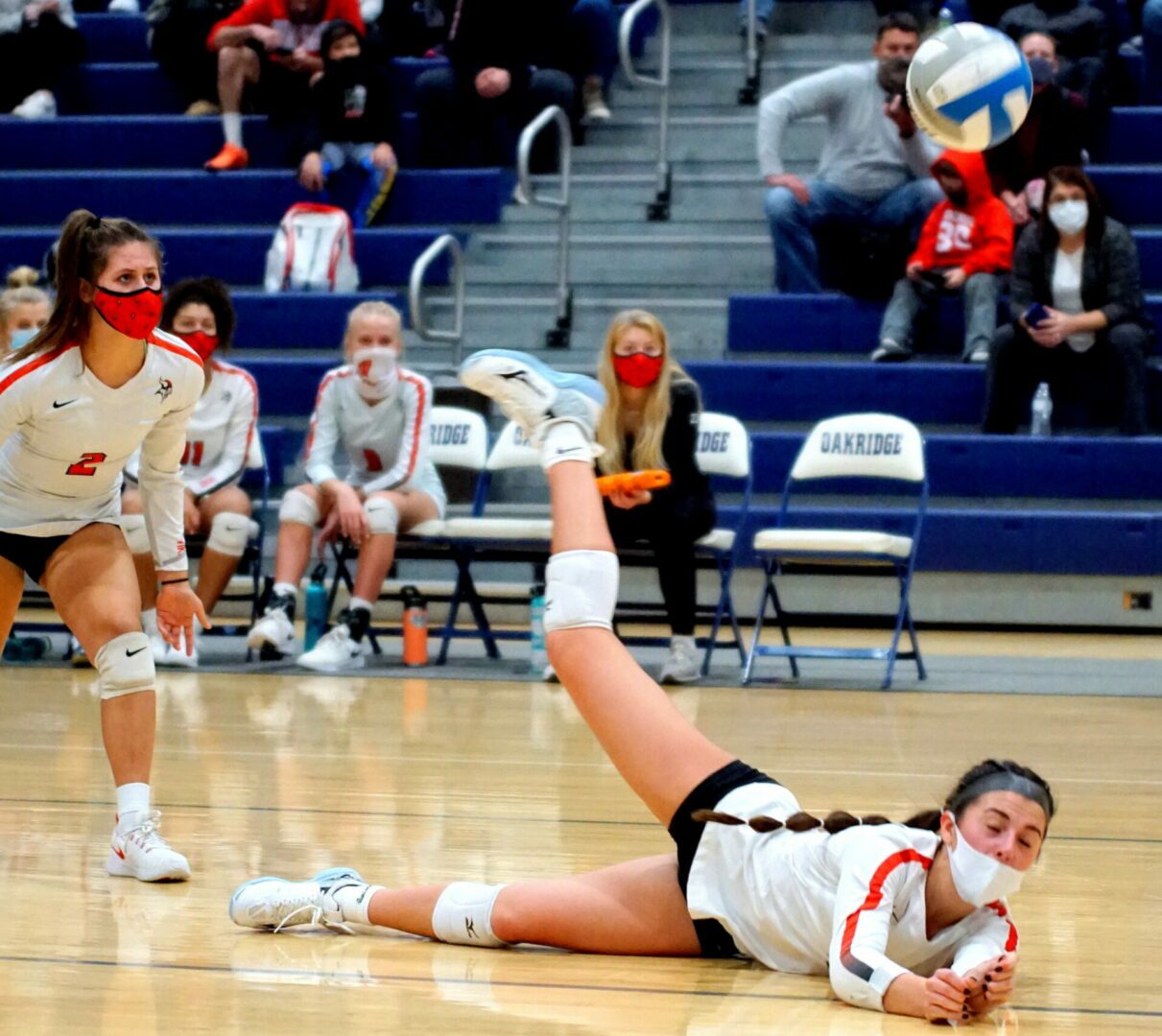 Charlie Baker dives to make a dig for Whitehall while teammate No. 2 Kyleigh Martin watches the ball. Photo/Leo Valdez

But the victory was the result of a total effort by a team that had its ups and downs all year – especially after losing All-Stater Rayne Thompson to injury just before the season began – but has finally been putting it all together in recent weeks.

“Welcome to 2020,” said Coach Edsall, whose team is now 20-9 on the season. “It has been a tough year, but we got rolling at the right time, and look what happened.

“When you play a team that legitimately has more talent, you have to serve and pass great, and I think we did that. This one was special. We were big underdogs, but I have never had a team play this hard.”

The stunning loss was difficult for a Montague team that rolled to championships in the West Michigan Conference and Greater Muskegon Athletic Association City Tournament this season, and made no secret of its desire to compete for a state title.

The Wildcats were a bit handicapped on Thursday, because their top player, senior Reilly Murphy, was limited to spot duty due to an ankle injury.

But they offered no excuses for the loss. After the final point, as the Whitehall players were storming the court, Montague Coach Shawn Bectel stood and applauded their gutsy performance. 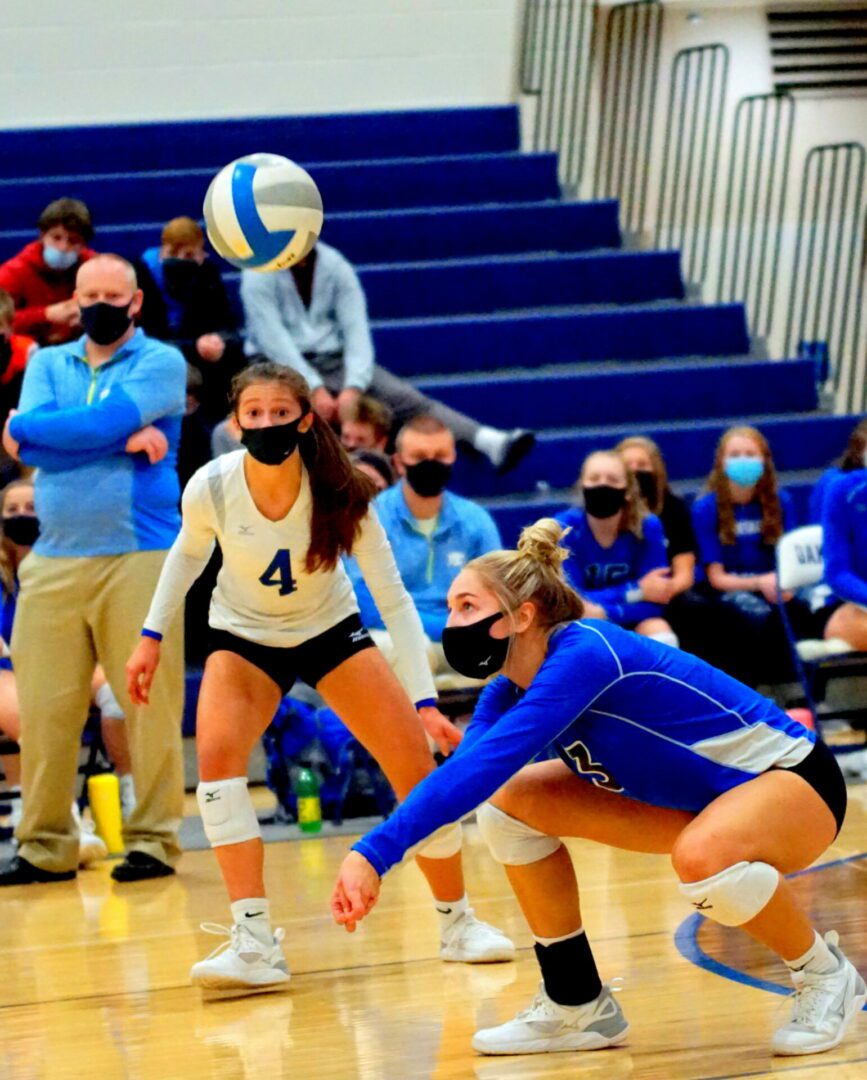 Reilly Murphy gets low for a Montague dig as No. 4 Morgan Netcott watches. Photo/Leo Valdez

“They played their hearts out,” Bectel said about the Vikings. “Sometimes you just have to take your hat off to the opponent. They played incredible. What can you do?

“That’s just this game, It’s hard to stay on top every second,” added Bectel, whose team finished the season with a 34-7 record. “It just wasn’t our night. I tried everything I could, gave every speech I had.”

Whitehall served notice that it came to play in the opening set, which was tied on nine different occasions, including the last time at 24-24. The Vikings scored the final two points, including a set-clinching ace by Baker, to take a 26-24 win.

The match appeared to return to normal in the second set, with Montague building a seemingly safe 16-9 lead. The Vikings called time out and then battled back, closing their deficit to 19-18, but the Wildcats regrouped and won six of the last eight points to seal a 25-20 win .

But the rest of the night belonged to Whitehall.

The Vikings built a commanding 20-13 lead in the third set, watched the Wildcats rally and pull within a point at 21-10, then  won four of the five final points to claim a 25-21 win.

The Vikings fell behind 5-2 in the fourth set, then reeled off 11 straight points, with nine coming on Evans’ long service run, to take a 13-5 lead.

Montague battle back and made the score 21-17, but the Vikings applied the final kill by winning four of the last five points to secure the 25-18 victory, along with the match and district championship.

Ally Hall had 16 kills and four blocks for Momtague. Raegan Murphy had 46 assists and 19 digs while Haylee Schwarz added 10 kills. 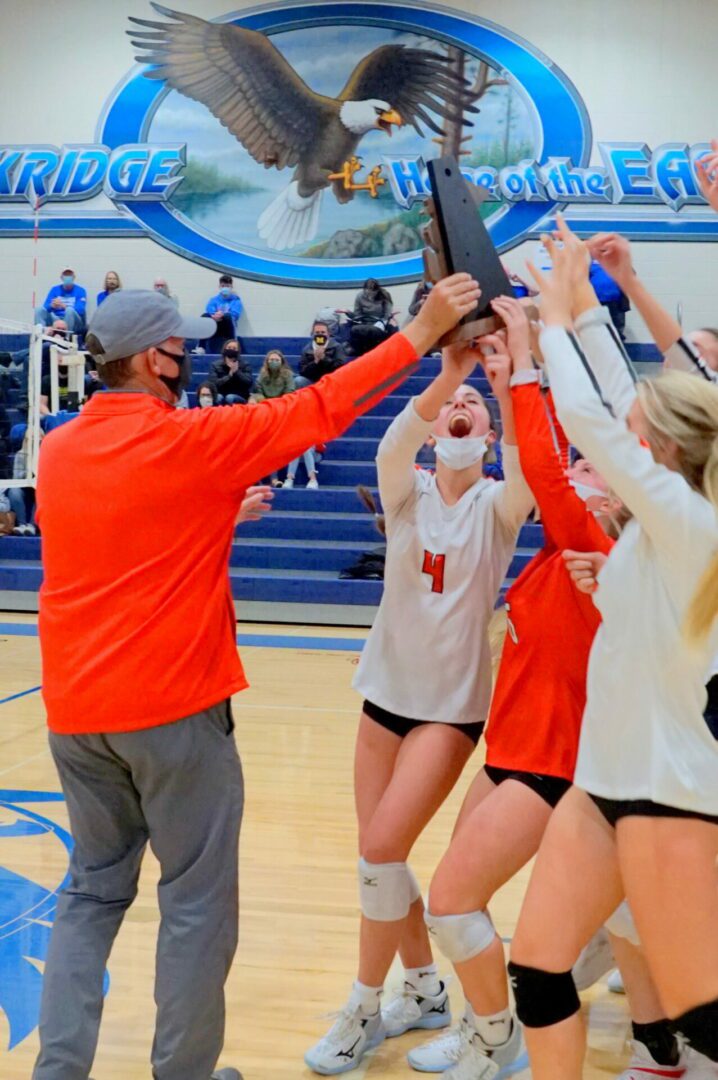 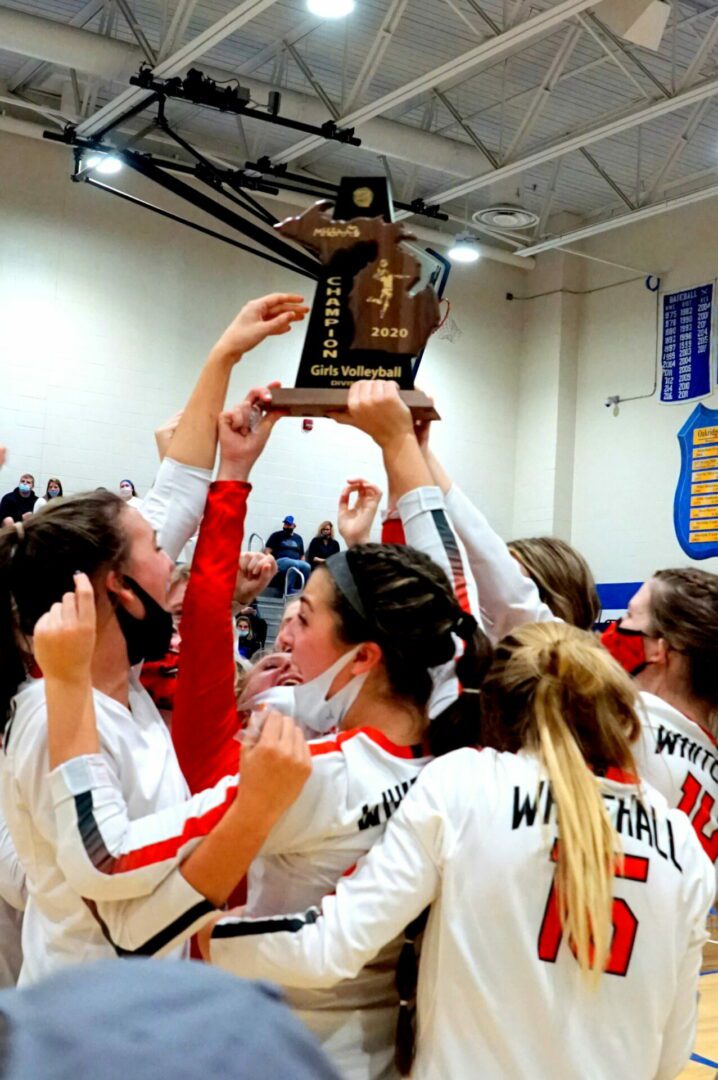 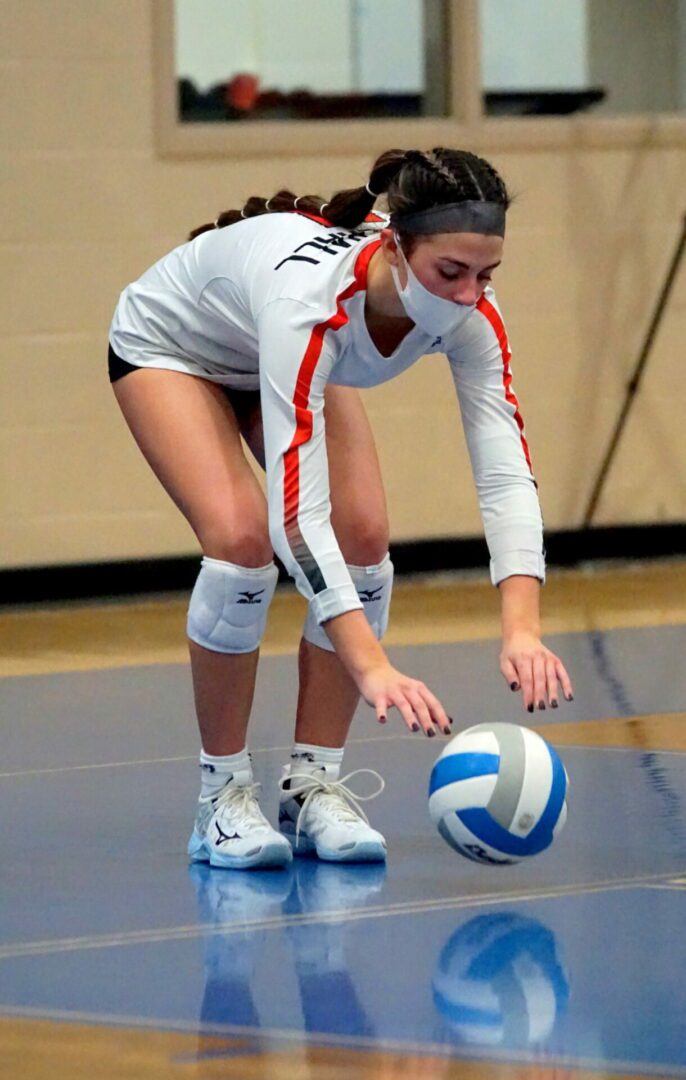 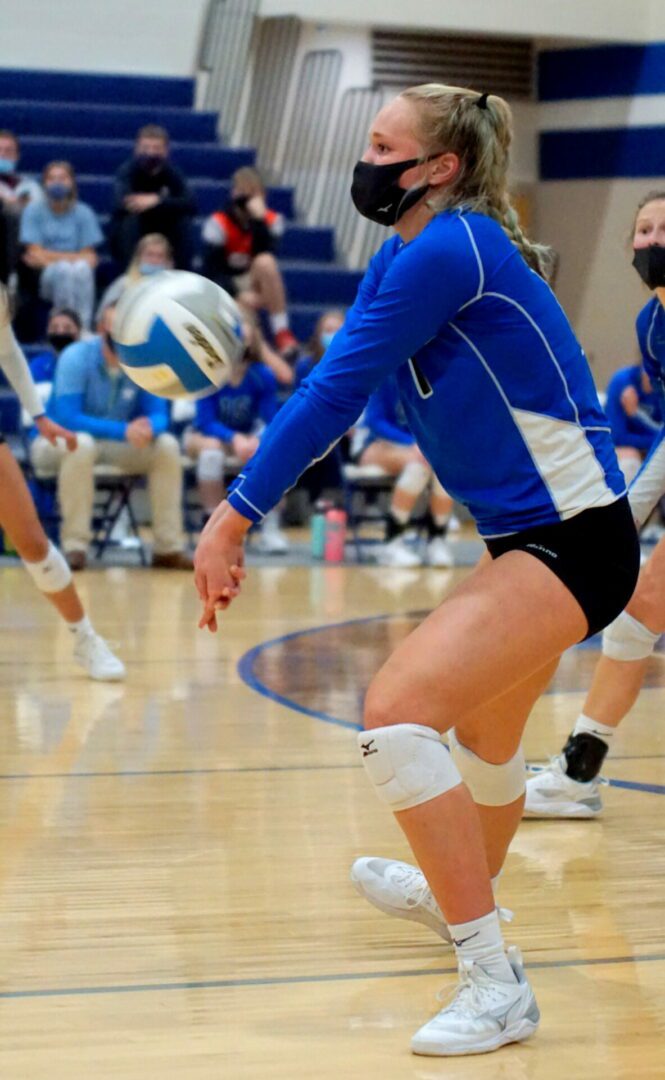 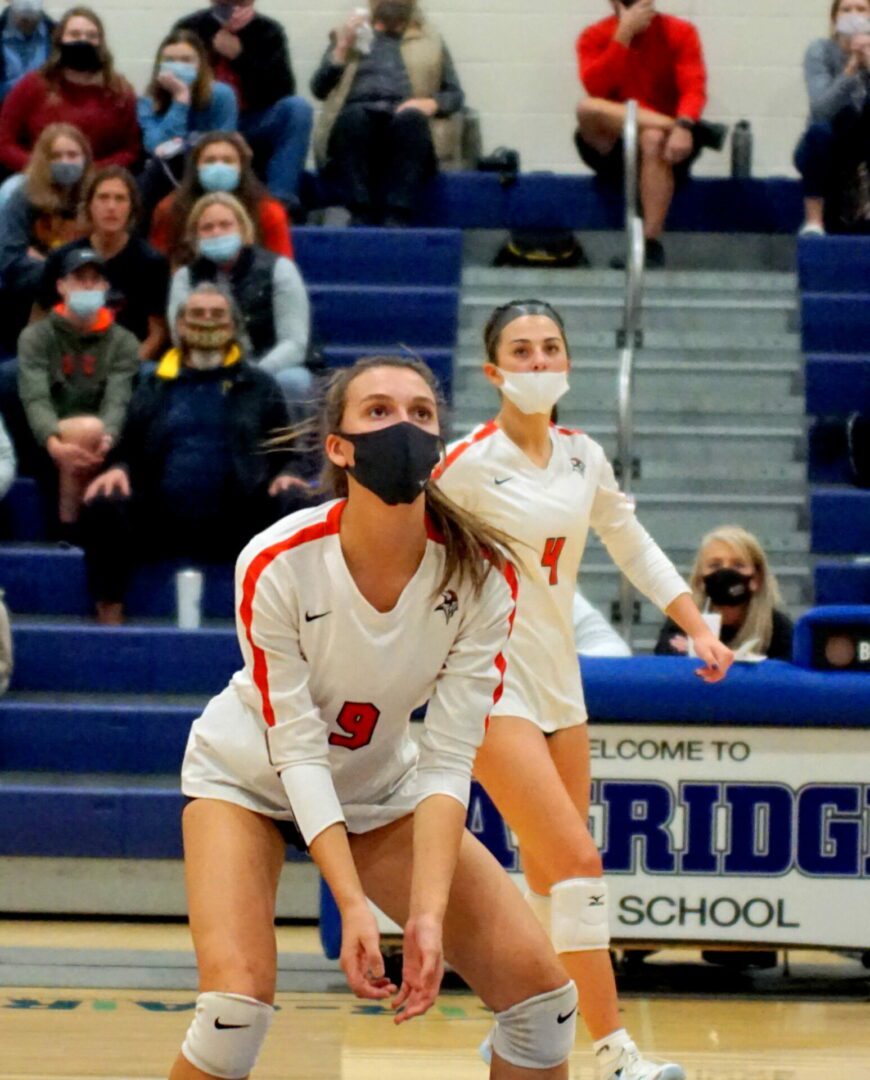 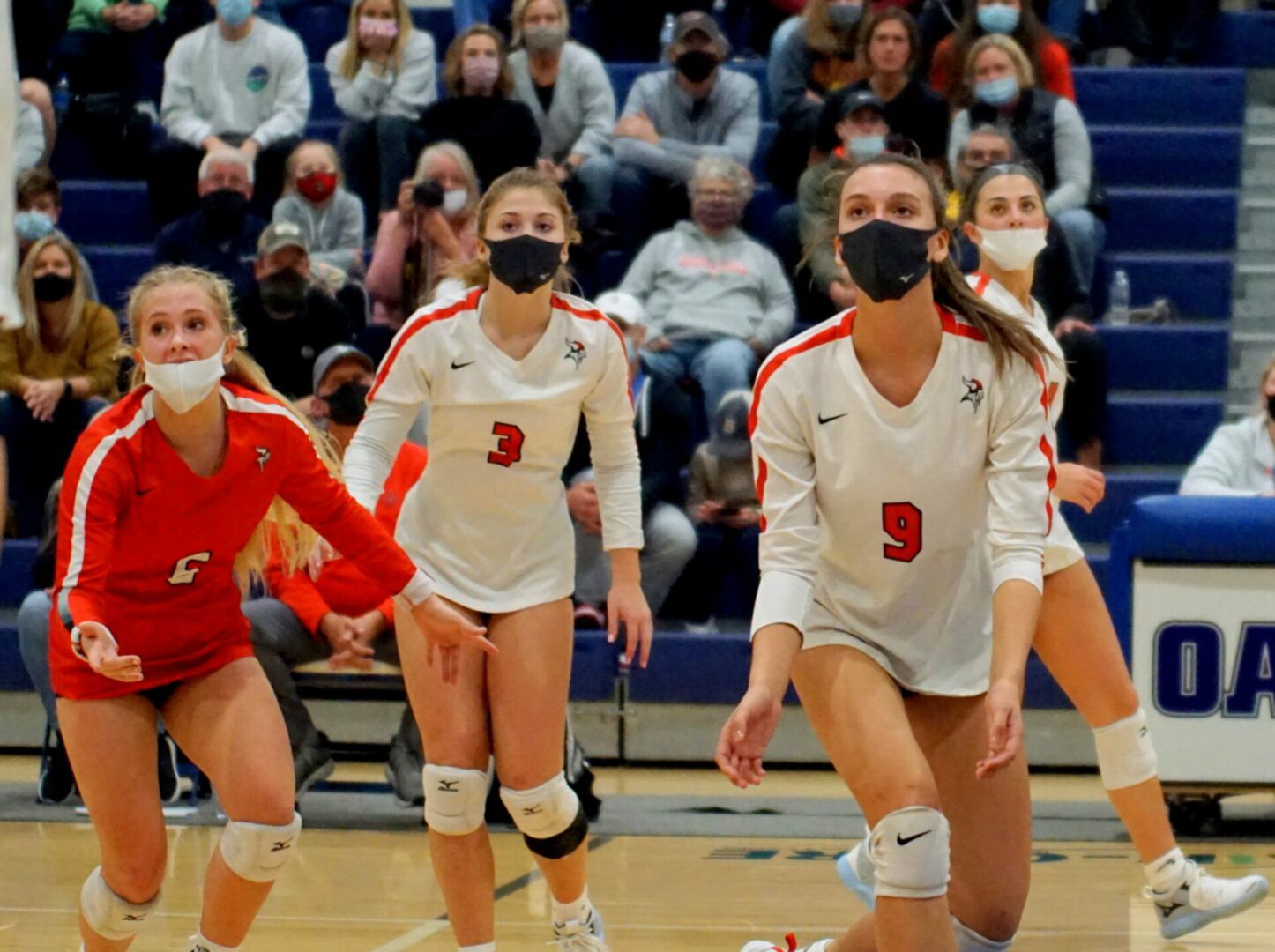 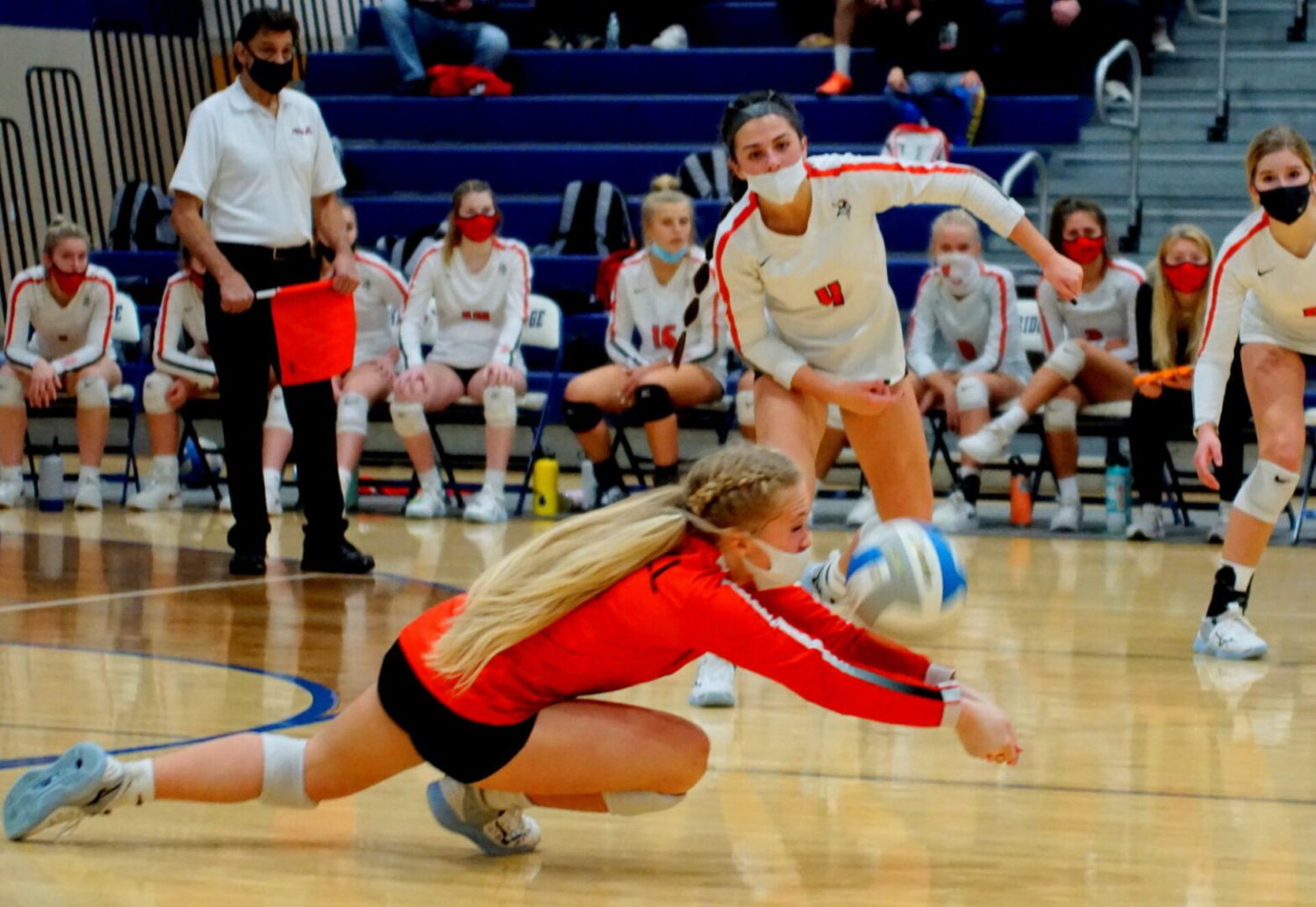 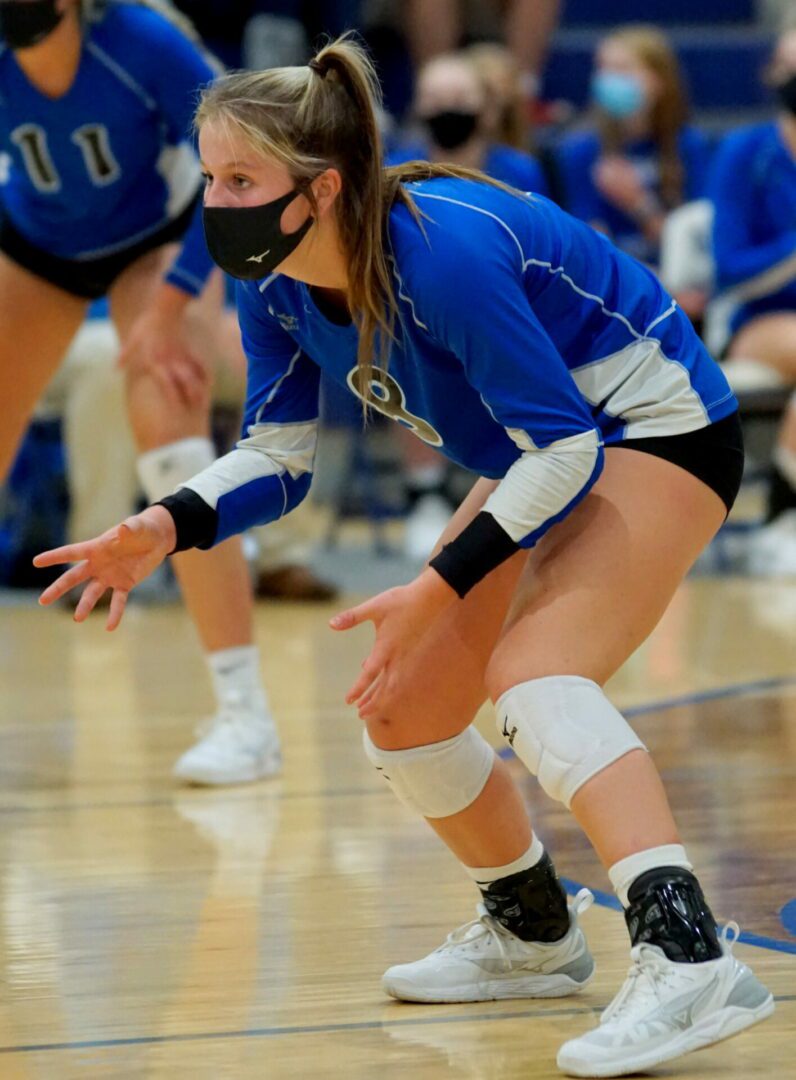 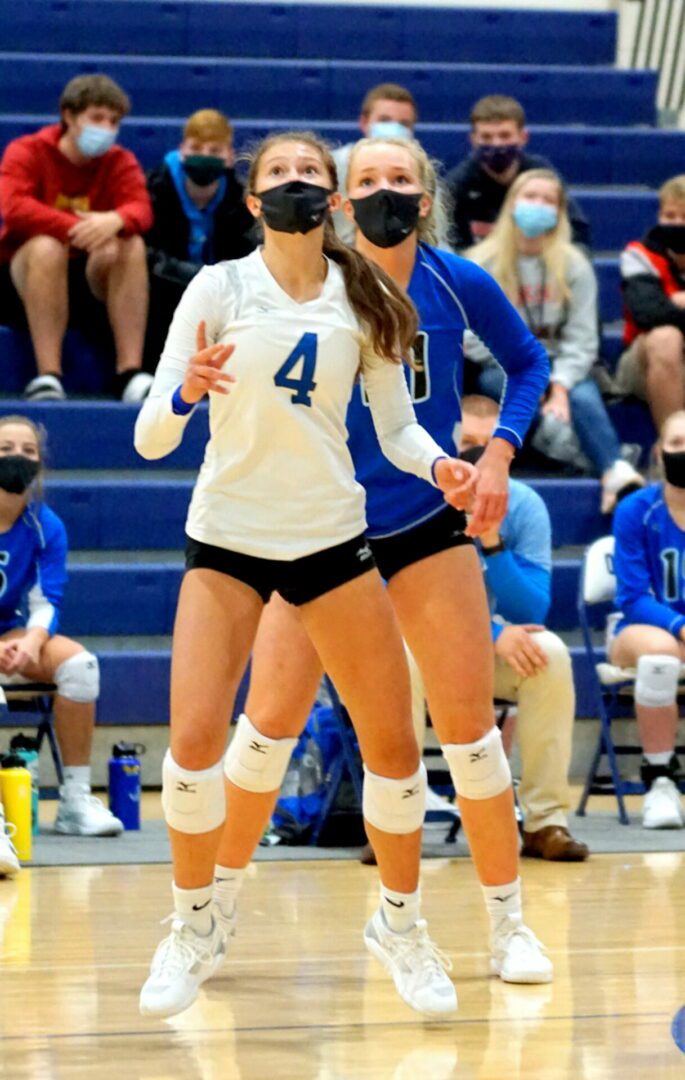 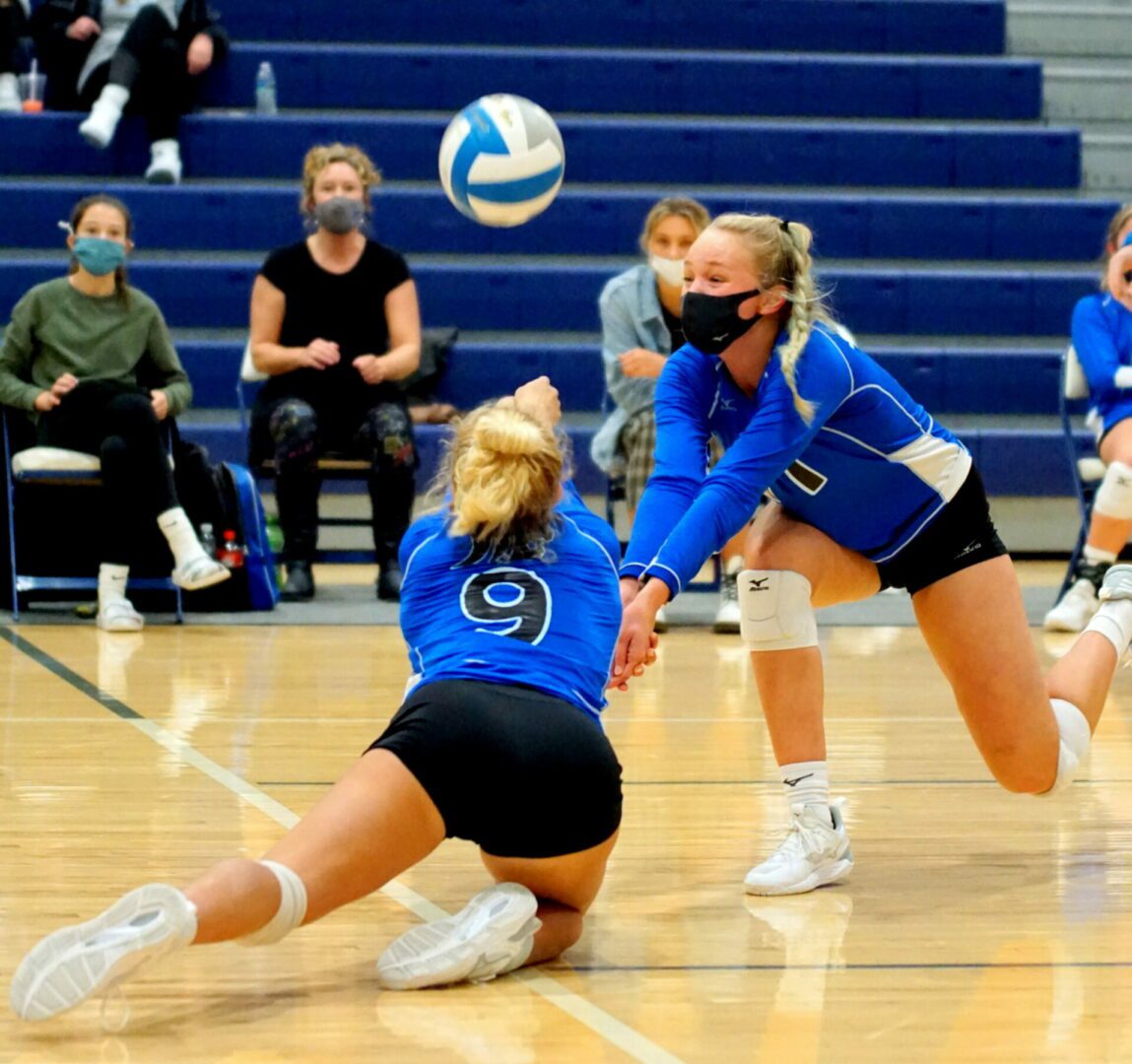 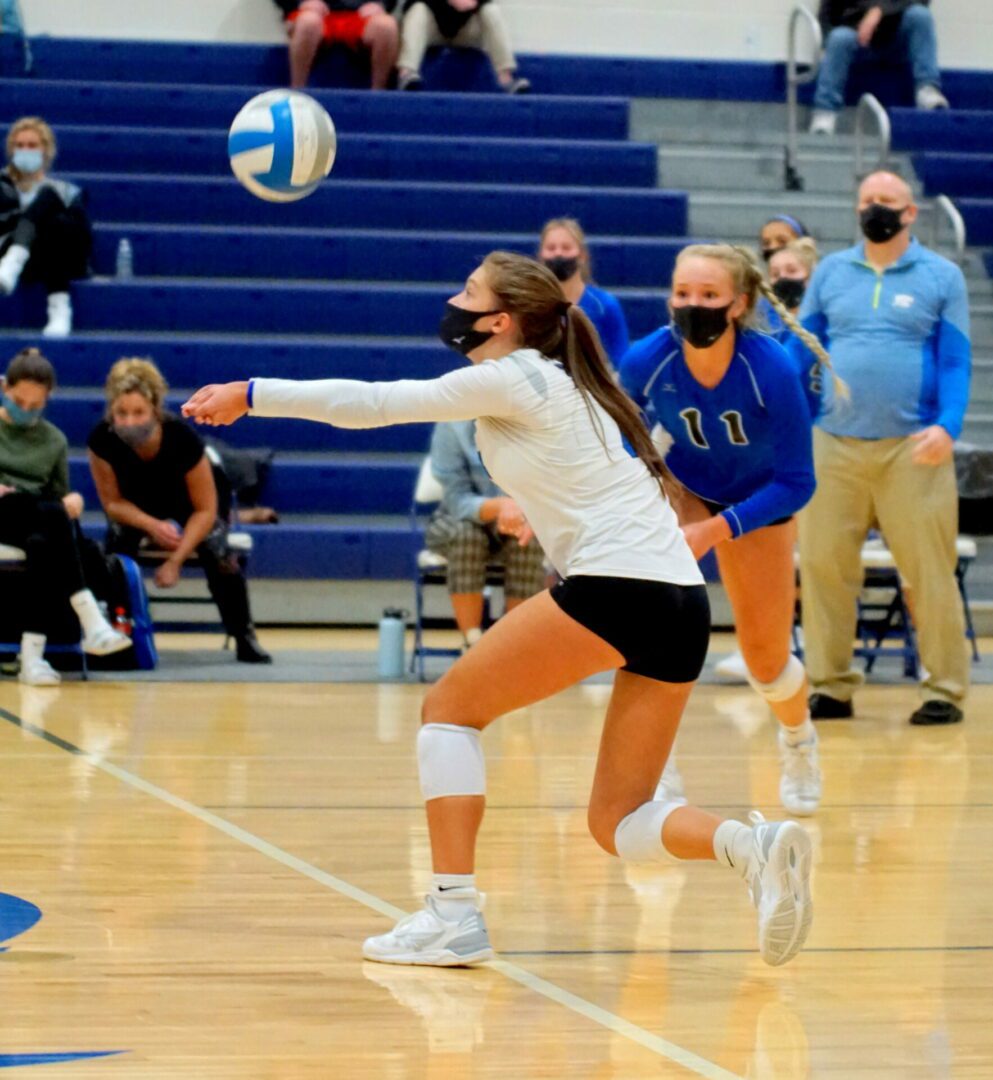 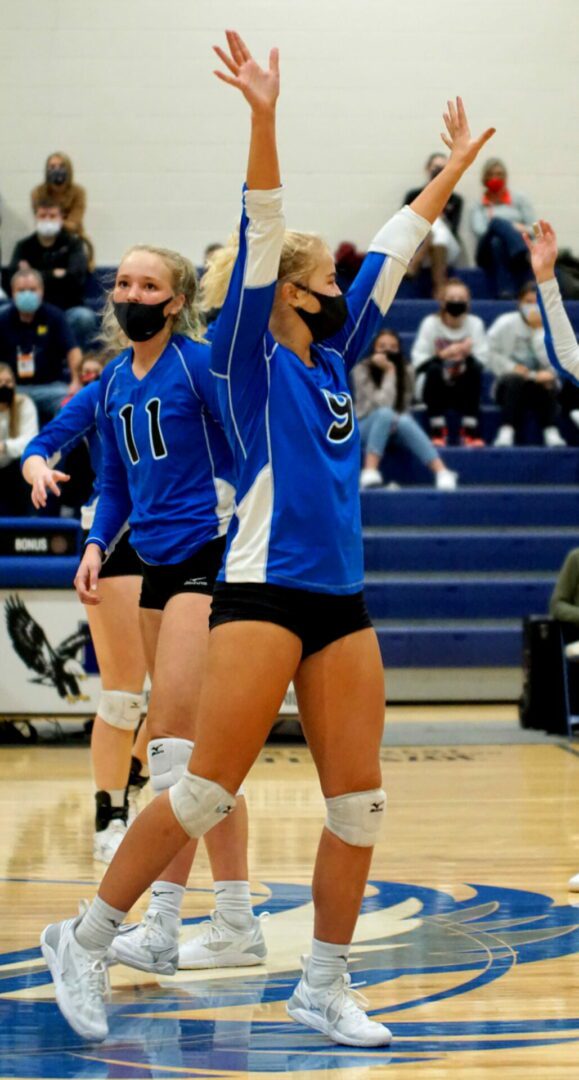 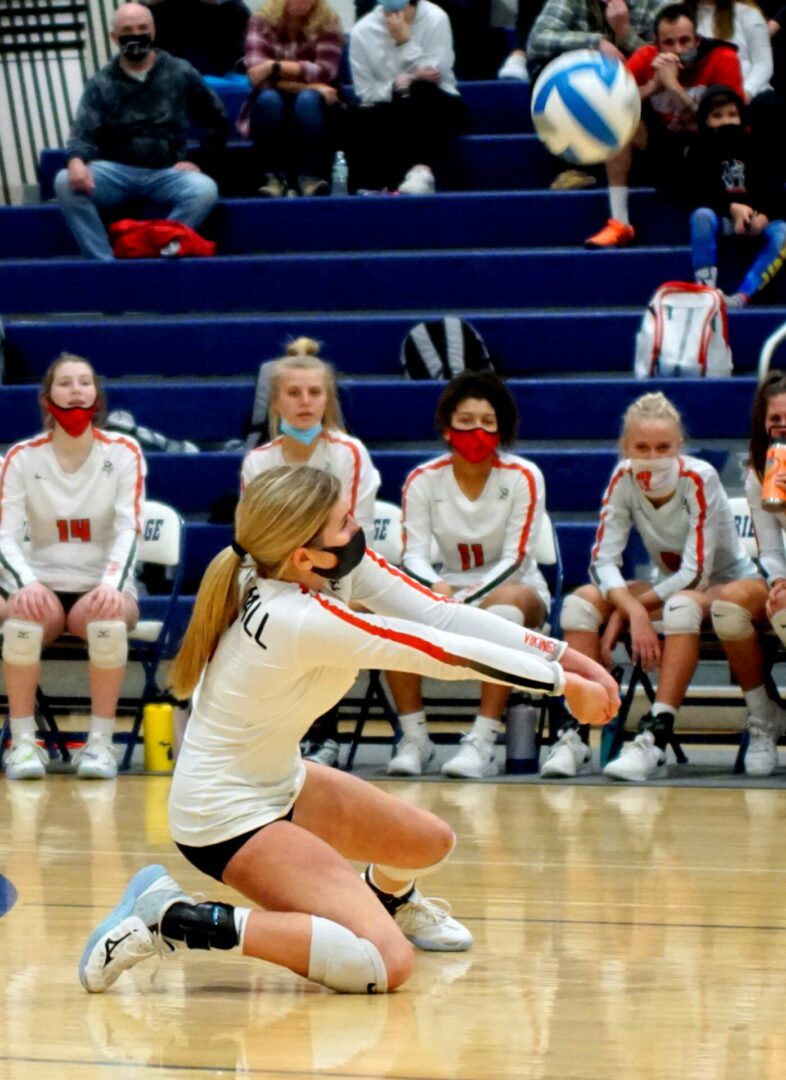 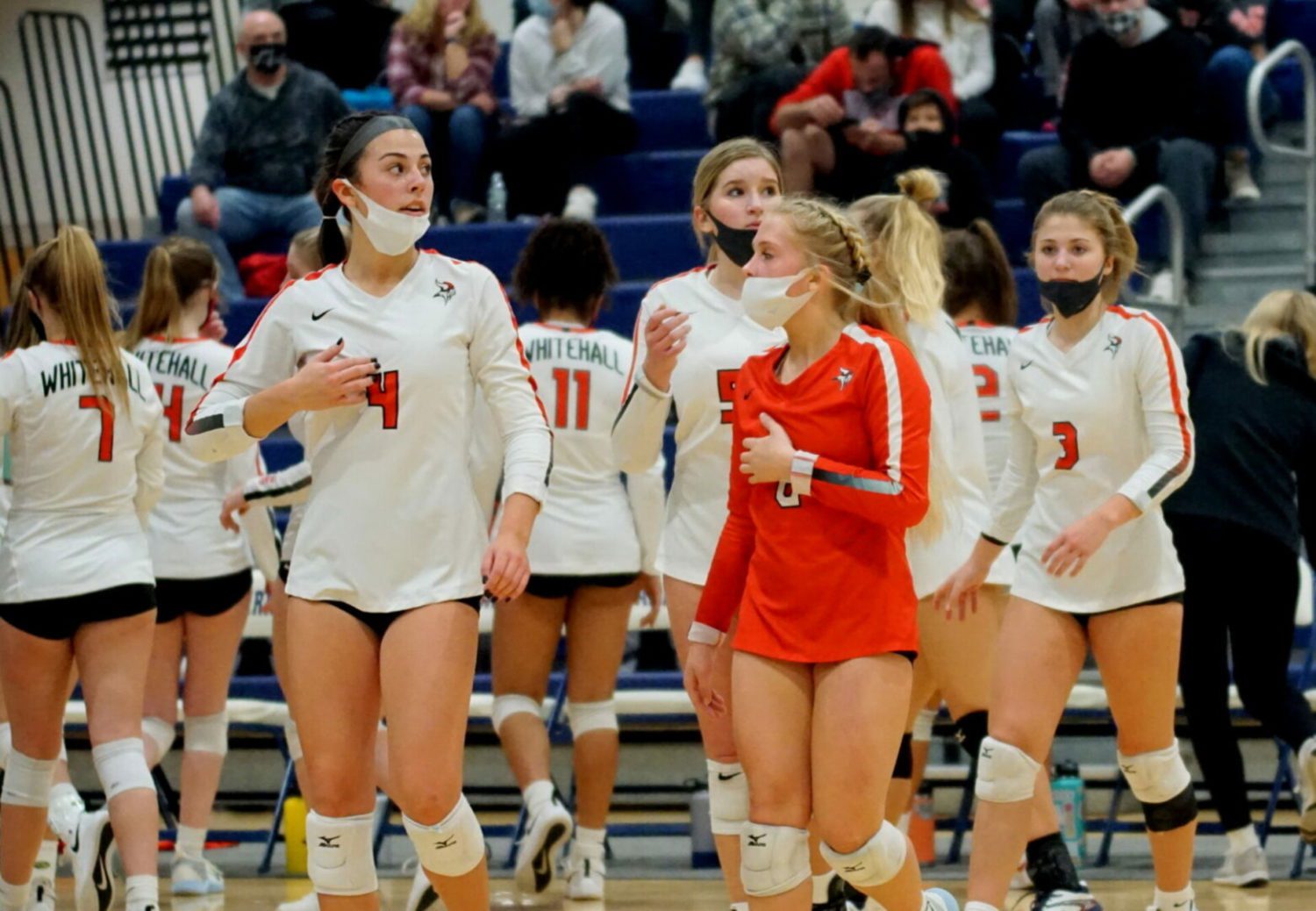 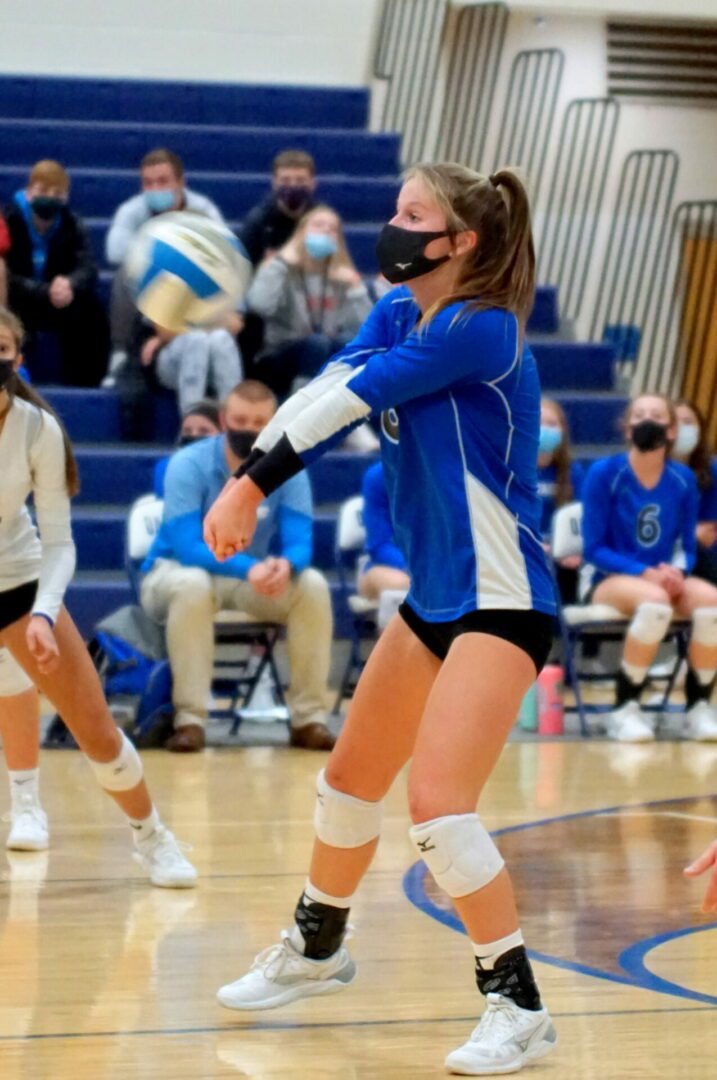 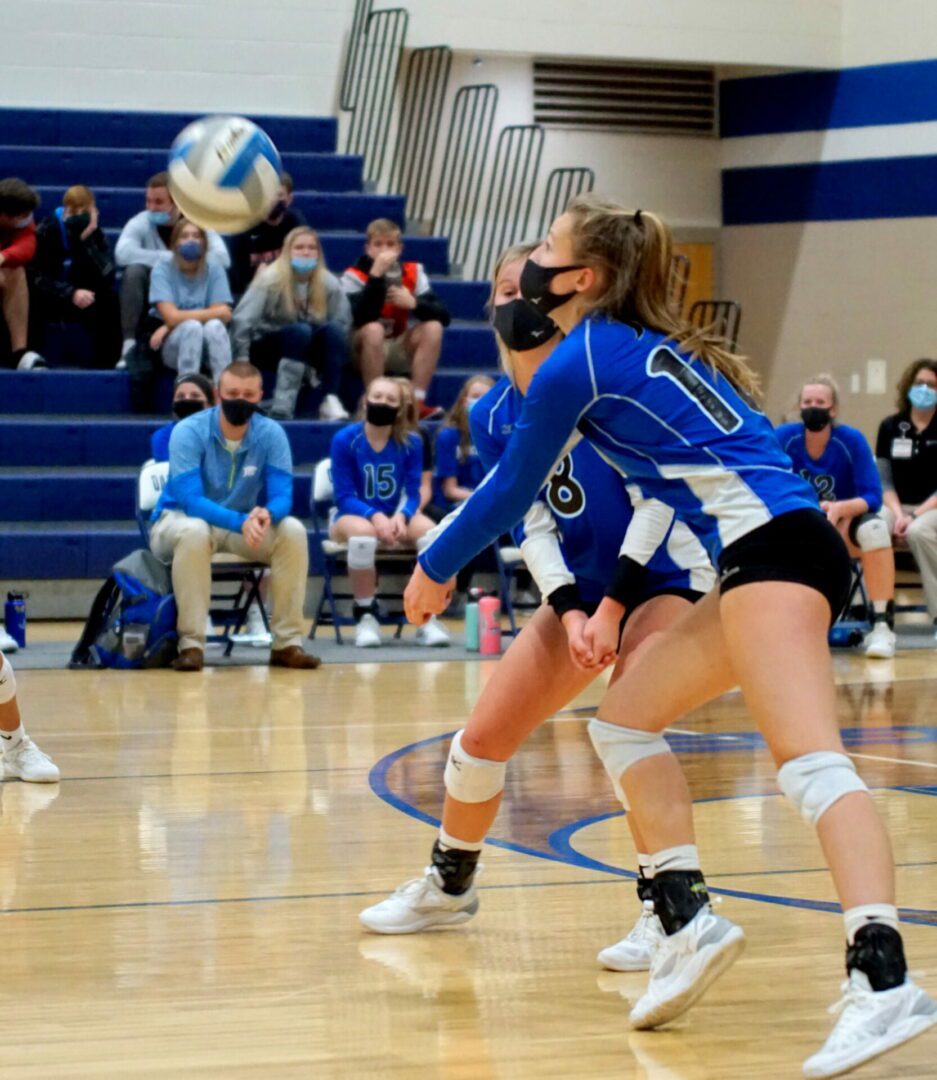 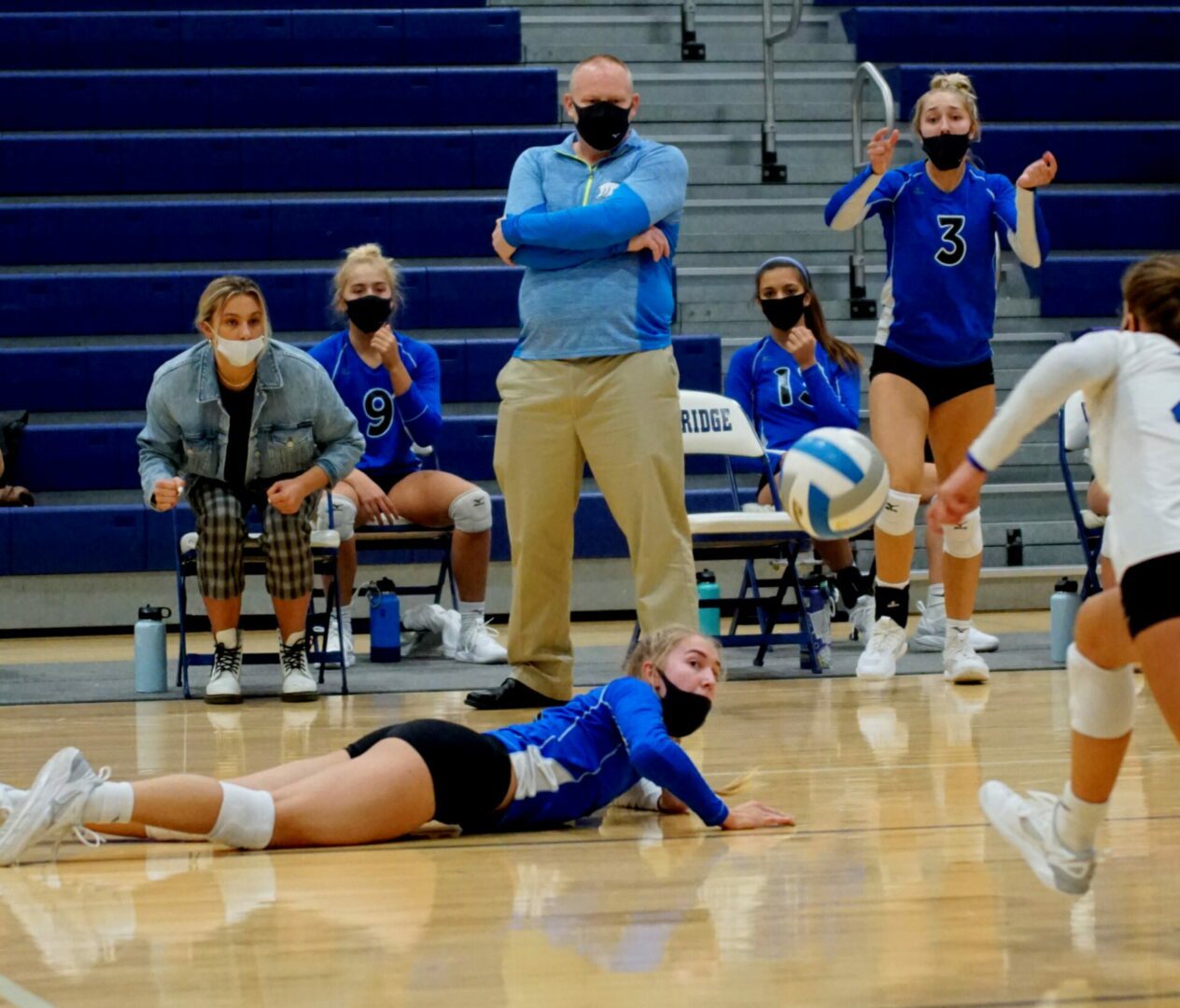 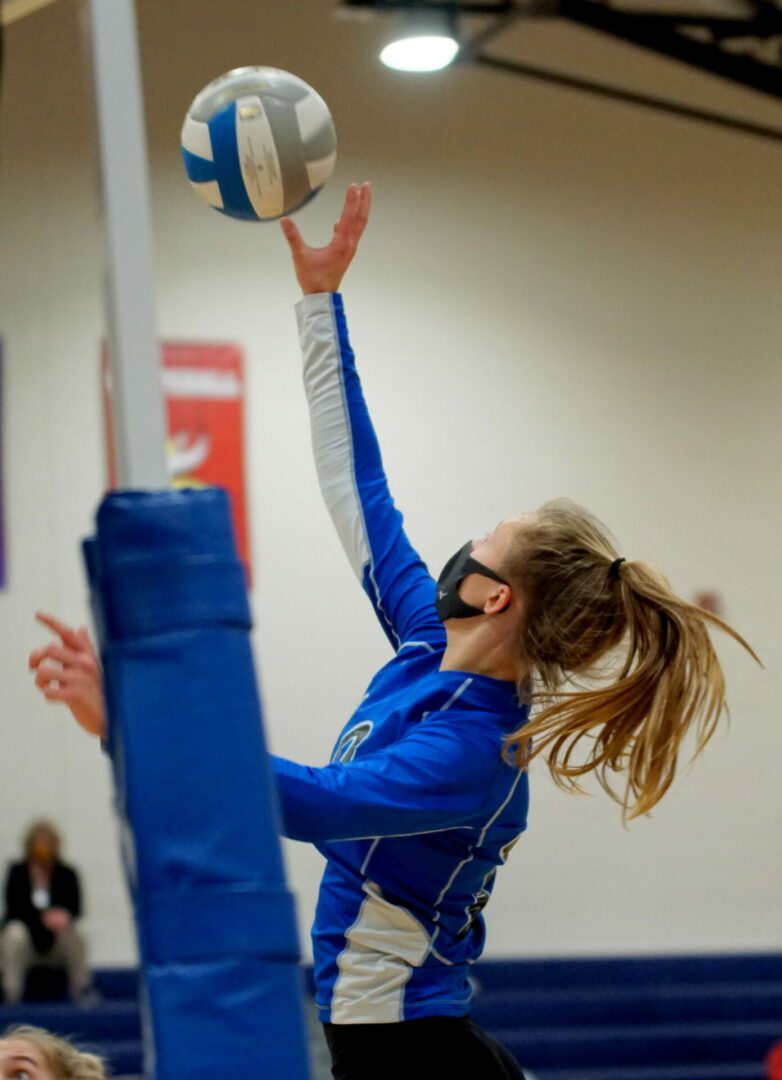 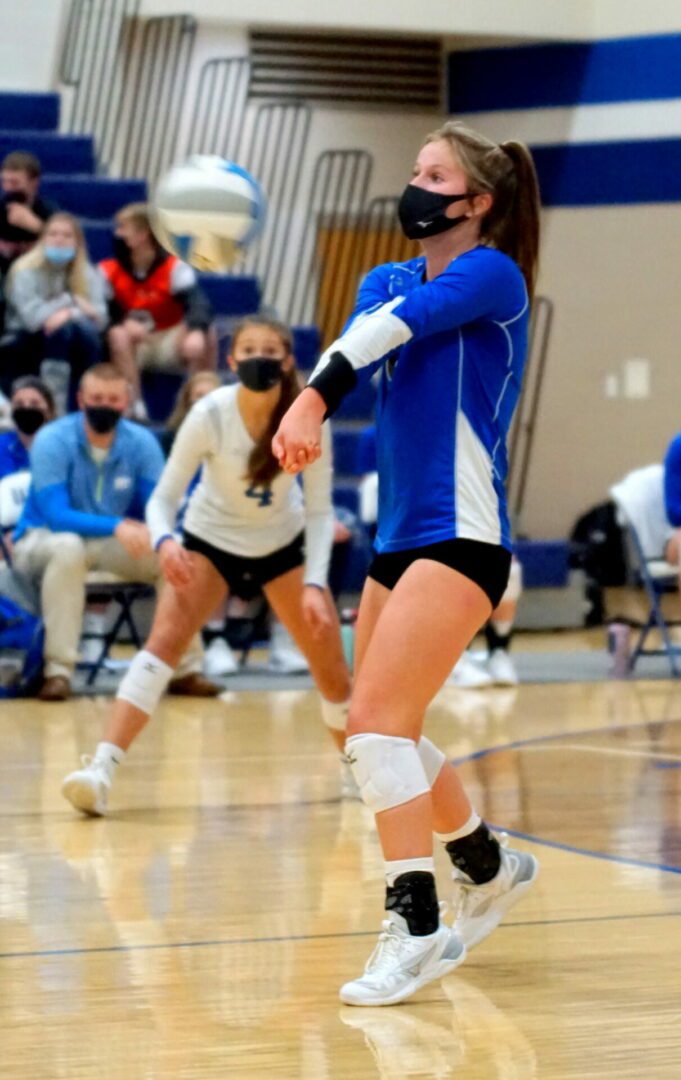 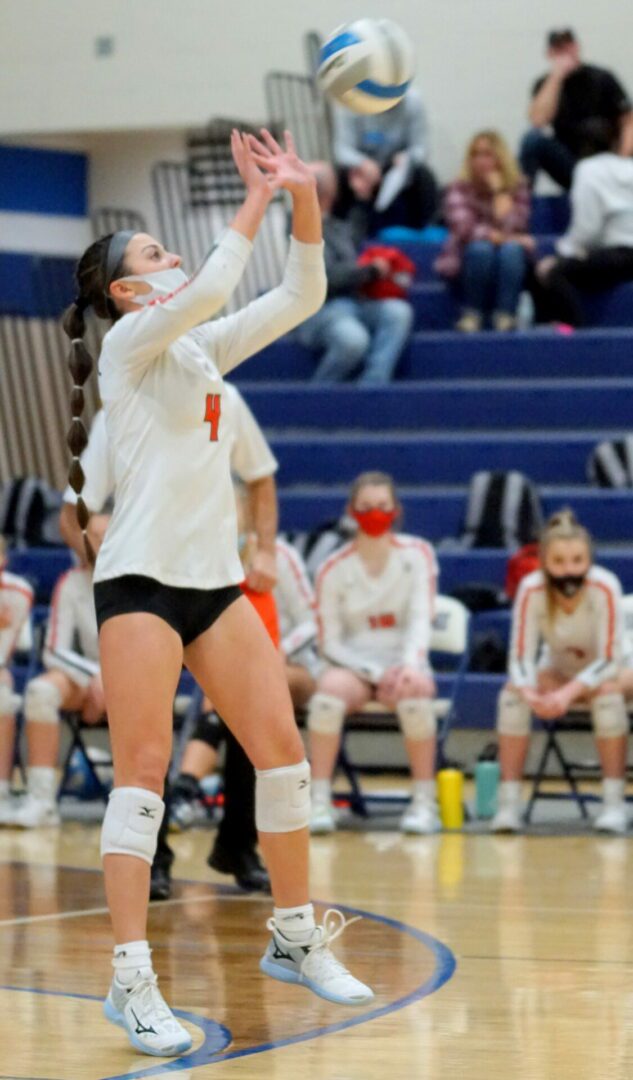 Reilly Murphy gets low for a Montague dig as No. 4 Morgan Netcott watches. Photo/Leo Valdez

After all his hard work, Laker big man Sam Johnson ready for a breakout season