MUSKEGON – It’s a shame the Muskegon Risers won’t be playing a full indoor soccer season this year, because they have a fun, talented team that puts on quite a

show, and a very loyal fan base that loves every minute of it.

The Risers, who have not played since last March when their indoor season was interrupted by COVID, returned to action with the first game of their limited three-game season at home on Saturday night. 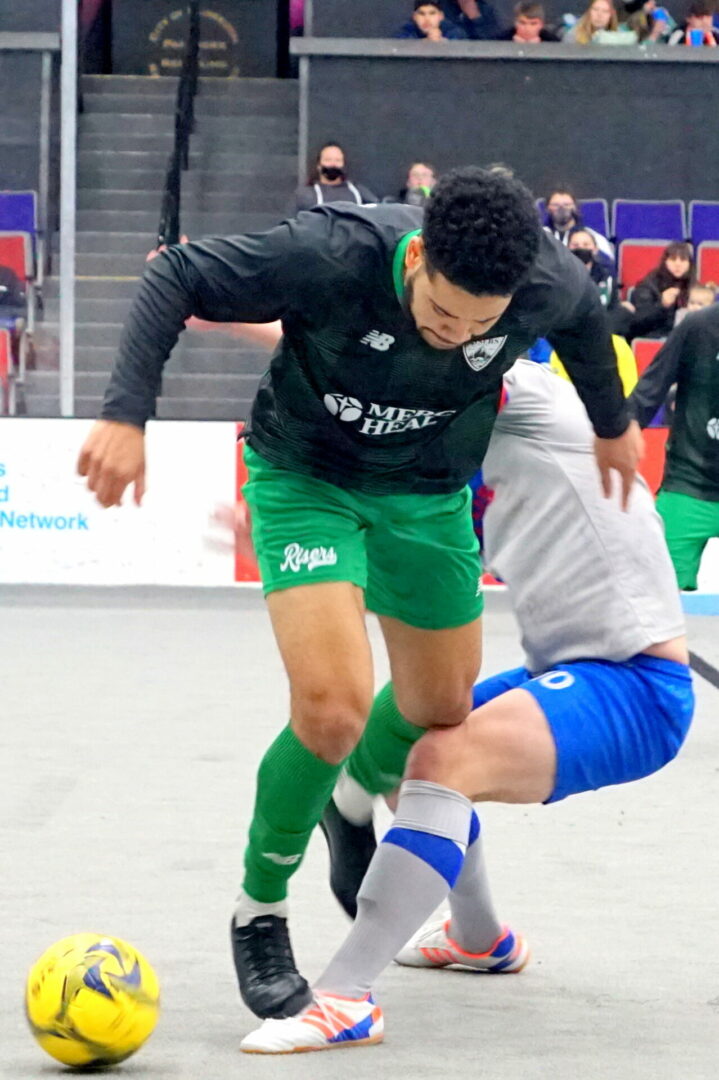 Muskegon’s Robert Williamson gets the ball knocked away. Photo/Leo Valdez

A surprisingly big crowd showed up to welcome the team back, and certainly got its money’s worth. The Risers rallied from three different deficits and scored three late goals to surge past the visiting Fort Wayne Athletic Club 7-5 at a loud and happy Mercy Health Arena.

All in all, it was everything the Risers could have hoped for on the opening night of an abbreviated season.

The Risers, who competed in the Major Indoor Soccer League 2 last year, decided to sit out the league season this year due to ongoing COVID concerns and a limited travel budget. 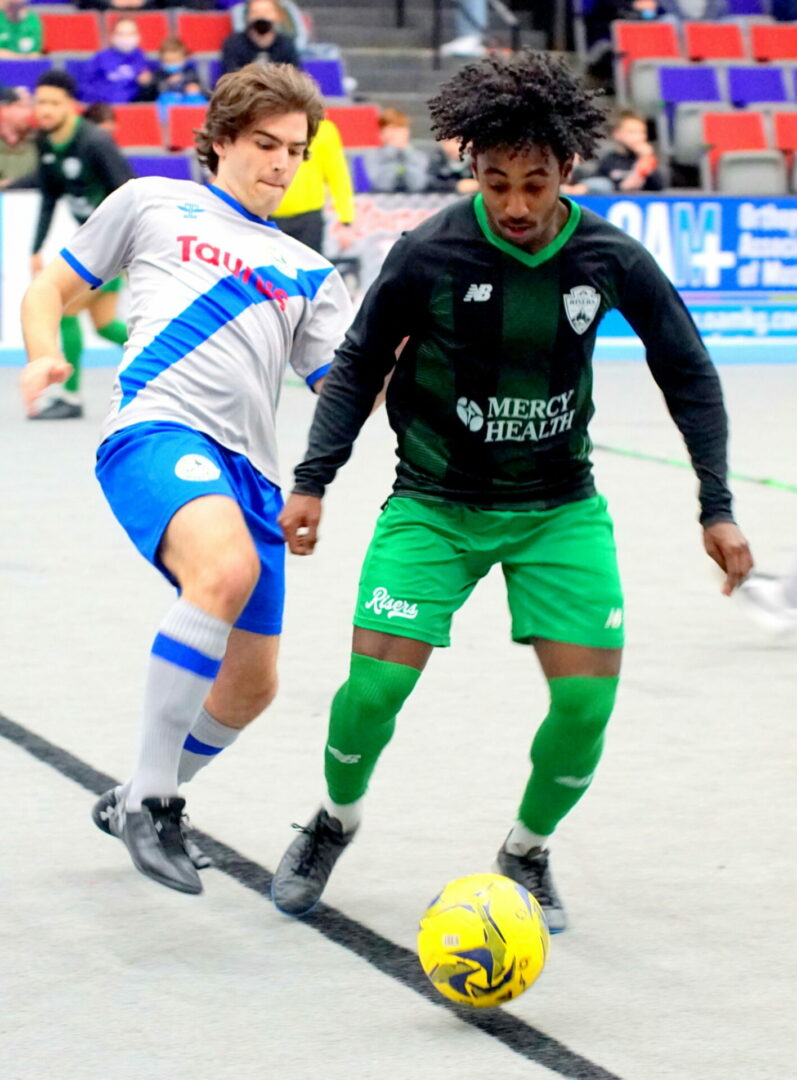 Instead they are hosting the three-game “Great Lakes Invitational,” which began with the game on Saturday night. The Risers will host the Cleveland Crunch on April 3, then close out the season on April 24 when they host the Colorado Inferno.

The Risers only had four practices before Saturday’s game, but were impressive as they continually battled from behind and prevailed in the end.

“We were down almost the whole game,” said Risers Coach Ben Ritsema. “But I think it’s a mentality of a lot of the guys. A two-goal lead in arena soccer is nothing. You just have to keep grinding and playing. Nobody was pointing fingers and everyone was grinding.”

After seeing what kind of team he has, Ritsema was asked if it made him wish the Risers could have a full season and compete for a league championship.

“We will play Cleveland and Colorado (two MISL2 teams),” he said. “They’re playing a full season and we’ll see how we stack up. Of course you wish you had a season, but you understand the times we’re going through. I think it’s safe to play all home games and not travel out of state. You wish you could have a season, but we’re glad to have games.”

Muskegon’s Mugel Flores scores a goal and gets congratulated by Robert Williamson and No. 22 Colin O’Keefe. Photo/Leo Valdez

No matter how short the season is, Flores was just happy to be playing. The talented forward loves to play in front of family, friends and hometown crowds, and said he had a great time on Saturday, particularly with enthusiastic fans cheering the Risers’ comeback.

Flores scored the Risers’ first goal in the first quarter, then added another just before halftime, giving Muskegon a 3-2 halftime lead.

His last goal came late in the game, putting the finishing touches on the victory.

“It feels good to be back with the fans and back with my teammates,” Flores said after the game. “We’re just building where we left off at. We started off strong last season, then were cut off short, but we showed what have tonight. 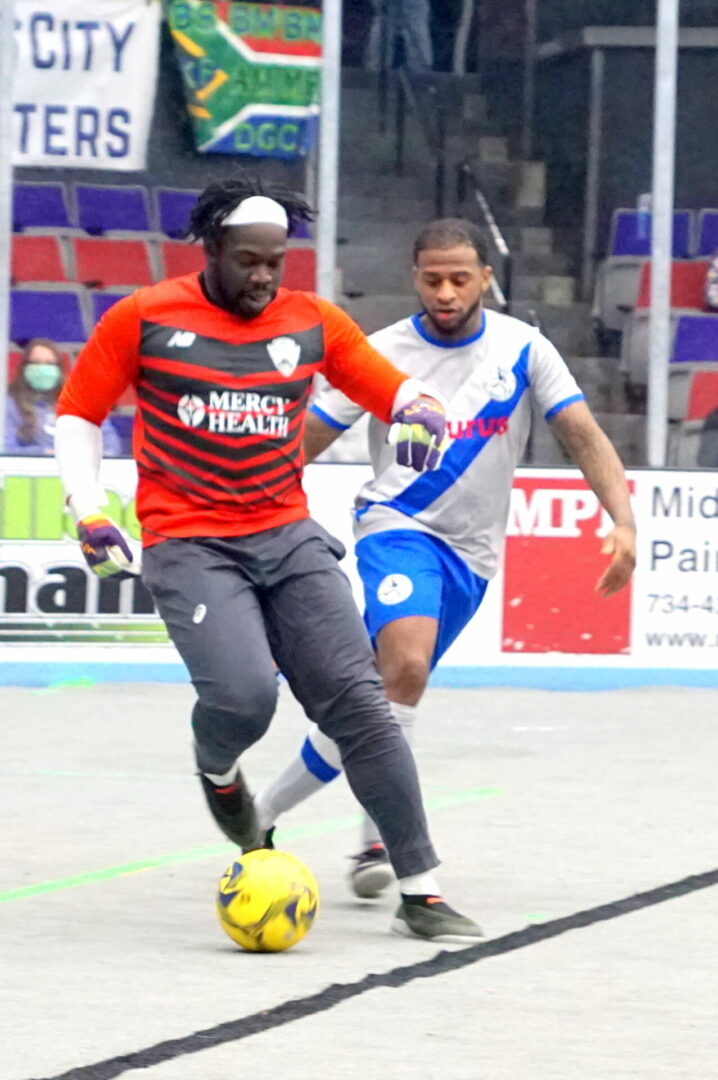 “We can’t thank the fans enough. They’re here for us every time we have a game and they’re always loud. Having them come out and support us is special.”

The game did not start out well for Muskegon. Fort Wayne’s Jose Rodriguez scored at the 8:55 mark, and the visitors led 1-0 after one quarter. Rodriguez found the mark again just 1:14 into the second quarter, and Fort Wayne was up 2-0.

The Risers’ offense came to life just before halftime and vaulted into the lead. Flores took a pass from Robert Williamson and scored with 2:06 left in the half, then O’Keefe tied the game about a half minute later when his shot hit a sidebar of the Fort Wayne goal and bounced in.

Flores scored his second goal with just 19 seconds left in the half, and the Risers went to the locker room with a 3-2 advantage.

Fort Wayne tied the game 3-3 when Urial Macias scored 3:35 into the third quarter. The visitors took a 4-3 lead about five minutes later when Cooper Foshee sent a shot through the legs of Muskegon goalie Michael Vollmer, who came into the game for a few minutes when Banahene left the game with a momentary injury. 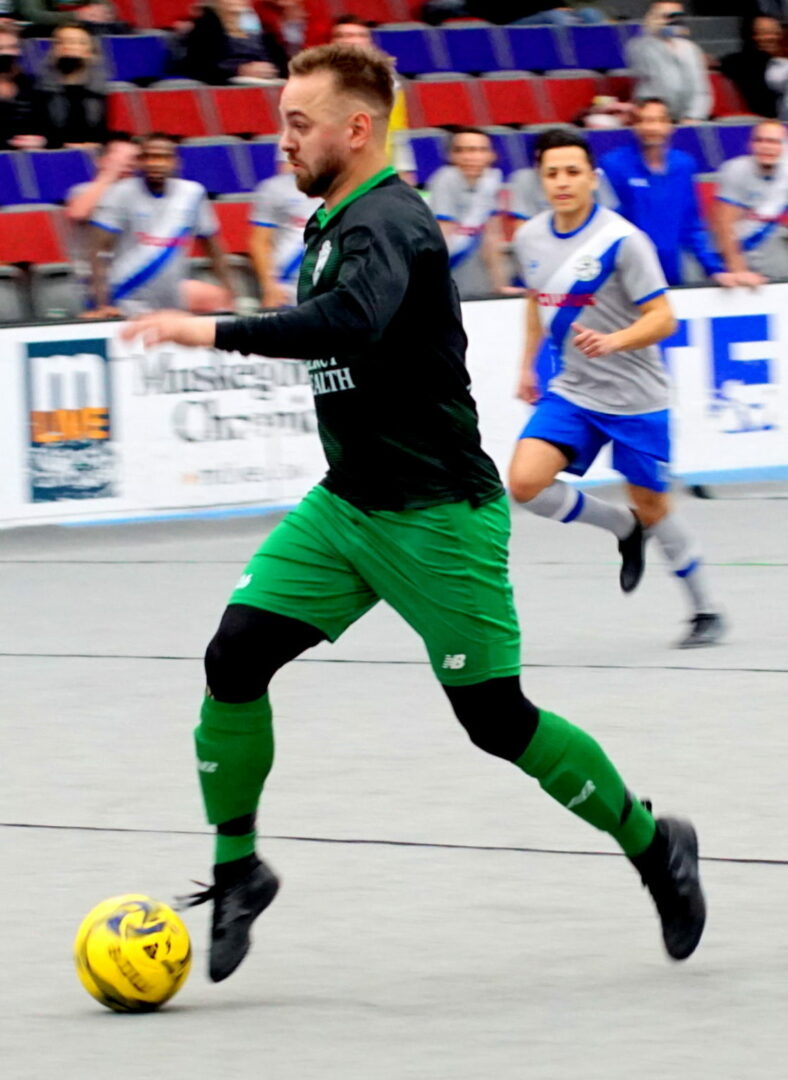 Cody Loss moves the ball up field for the Risers. Photo/Leo Valdez

The Risers came back again in the fourth. O’Keefe scored his second goal just 1:10 into the quarter when his shot hit the crossbar of the goal and bounced into the net, tying the game 4-4.

Fort Wayne took its final lead at the 6:21 mark when the visitors broke into the Muskegon zone on a 2-on-1 break. Breno Oliviera sent a centering pass to Nate Dove, who buried a shot to make the score 5-4.

The Risers’ final rally began when Marcel Berry scored to tie the game at 5-5 at 7:09 of the fourth quarter. Muskegon killed off a Fort Wayne power play without allowing any damage, then Mendez got the ball in the middle of the field in the Fort Wayne zone and ripped a shot that found the right corner of the net, giving the Risers a 6-5 lead.

Flores got his final goal, and completed his hat trick, with 1:13 left in the game, and the celebration was on.

“They’ve been coming to the practices and working hard,” Ritsema said about his players. “They’re listening to me and it showed. Our power play kill was huge. We practiced that and it showed. I saw a lot of the things we worked on in practice pay off. It’s a credit to them for working hard.” 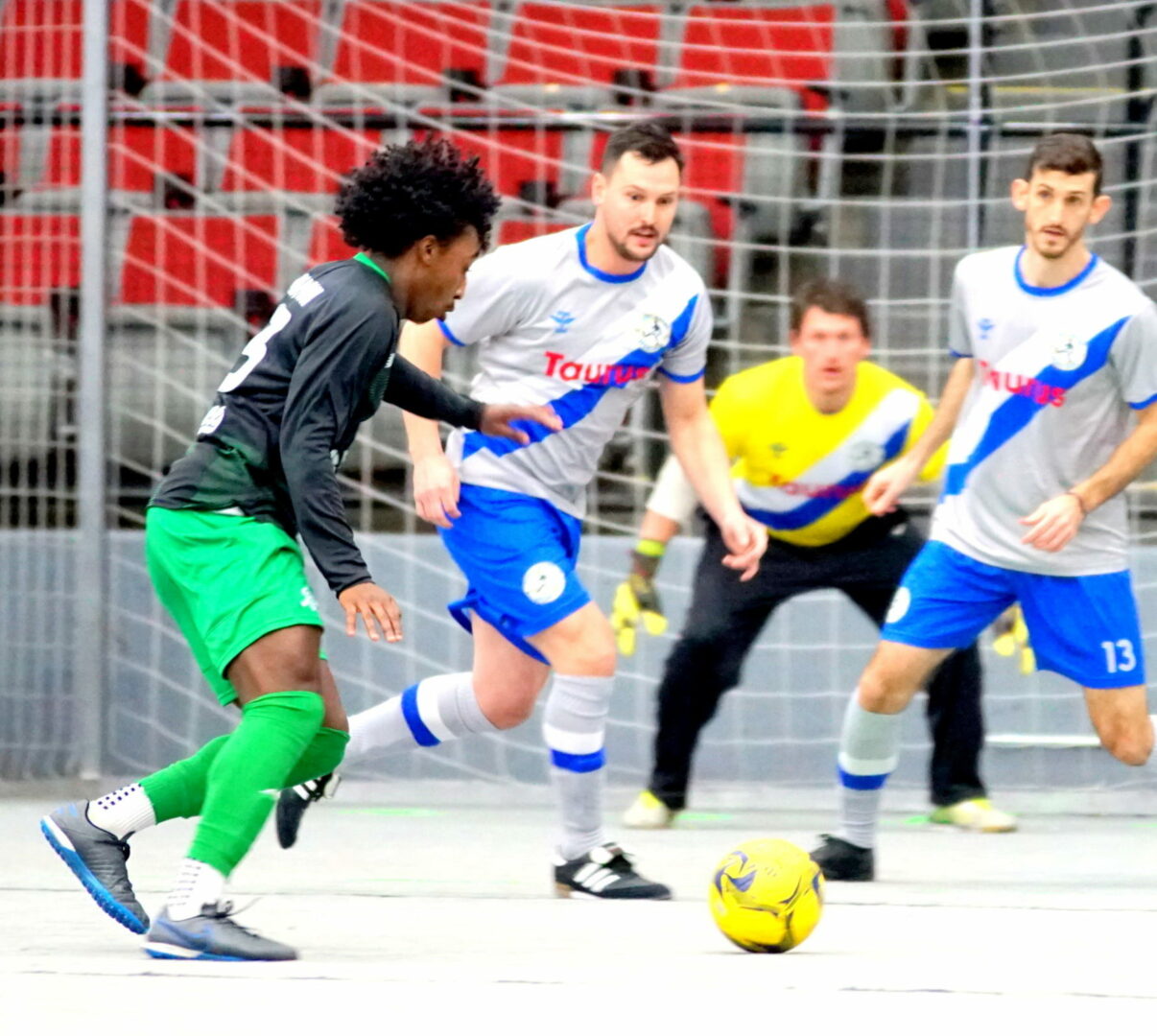 Marcel Berry gets ready to take a shot for Muskegon. Photo/Leo Valdez

Muskegon may not have had a chance to rally if it weren’t for the play of Banahene in goal. The Risers were outshot 14-11 in the first half, but Banahen  made a series of acrobatic saves to keep his team in the game when Fort Wayne was threatening to break things open.

Banahene usually plays for the big-league Harrison Heat, but that team took the season off due to COVID.

“I’m 237 pounds so I don’t like to do them,” said Banahene about the saves that require jumps and dives. “But we’re just having fun and it was good to get the first win. I was super impressed with everything.

“I think honestly this isn’t any different than the higher level. It’s the same atmosphere and same professionalism. It was great and the fans were awesome. You can tell people are proud to be in Muskegon.” 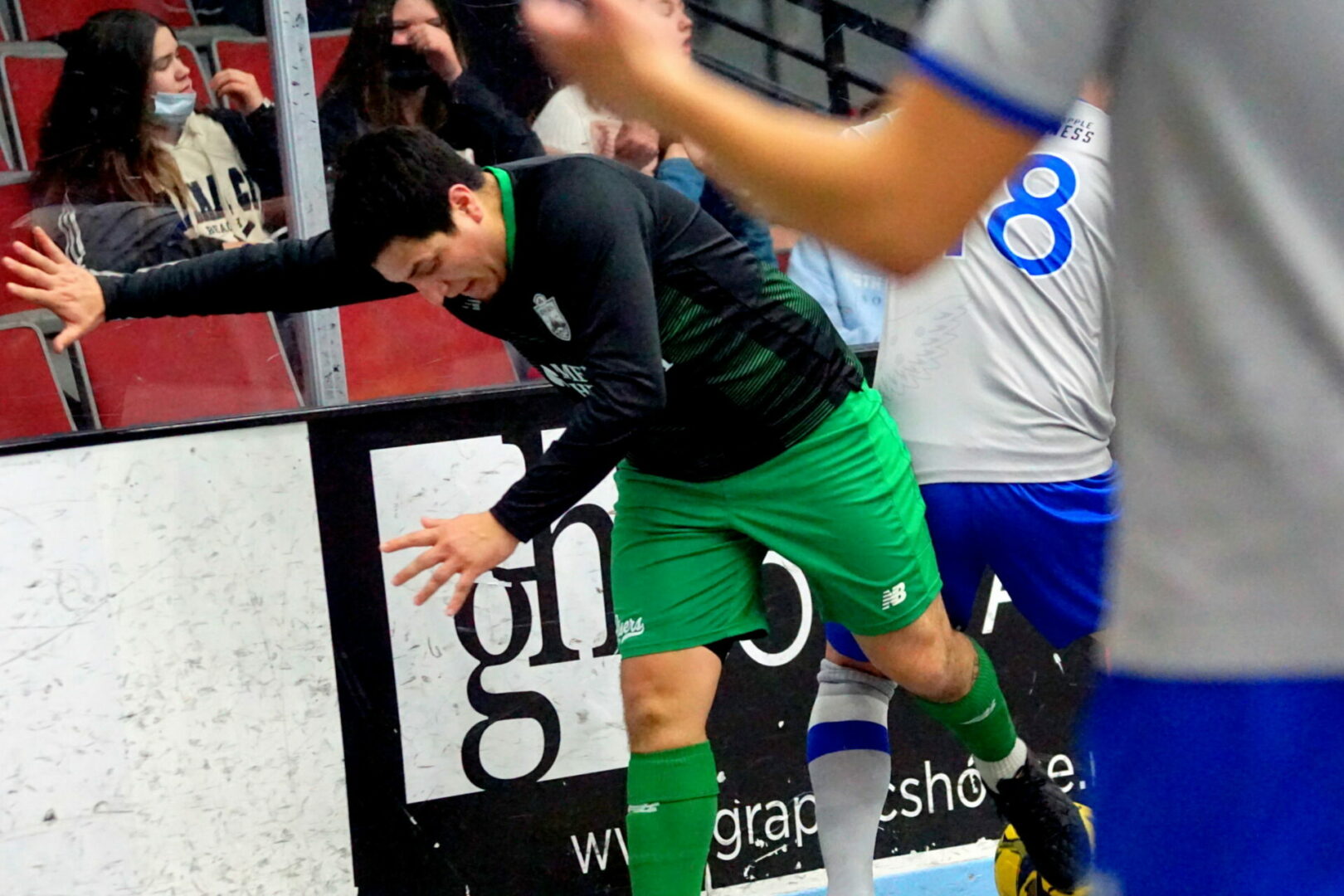 Aldony Mendez battles for the ball along the boards for Muskegon. Photo/Leo Valdez 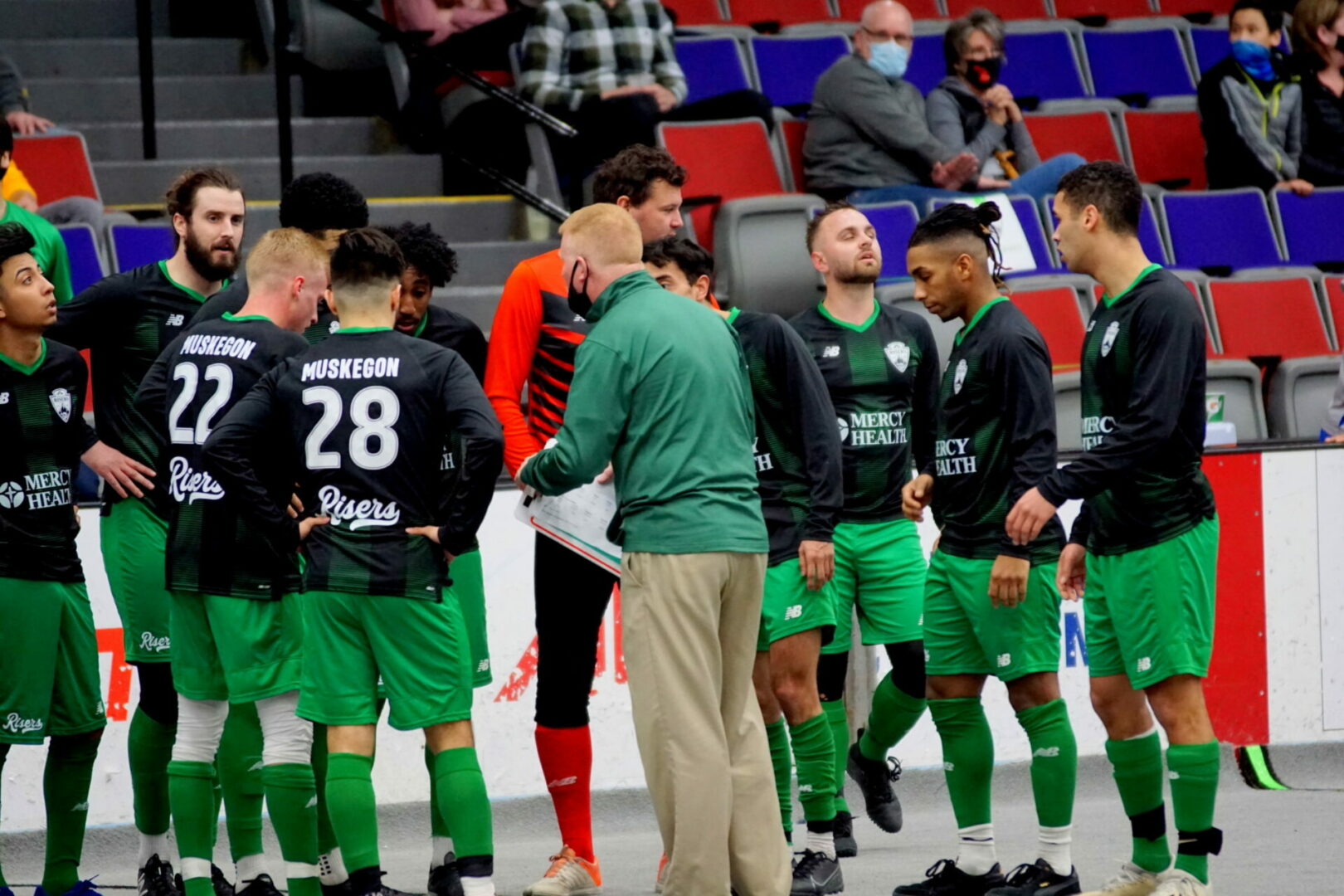 Risers Coach Ben Ritsema talks with his team during a timeout. Photo/Leo Valdez 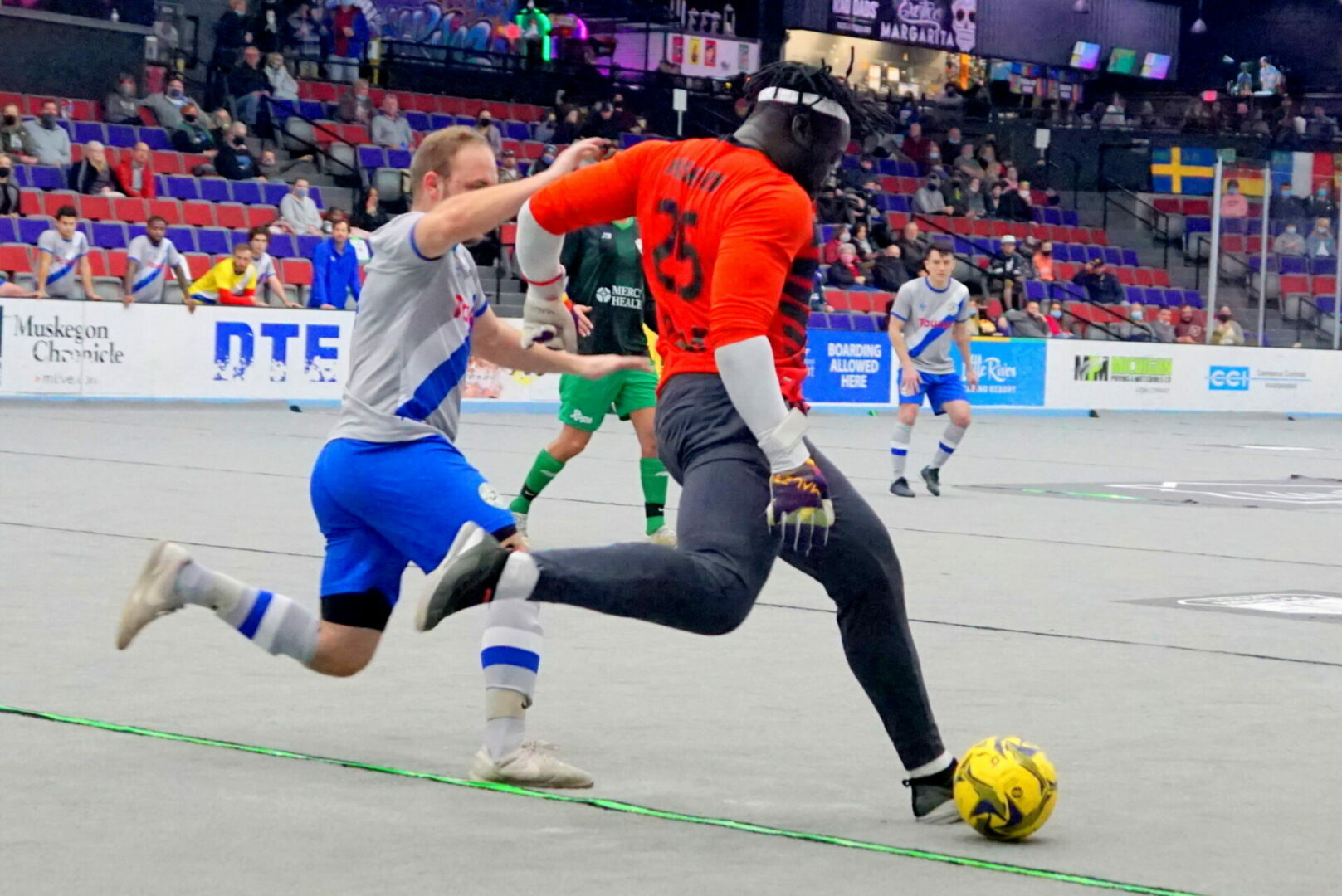 Goalie William Banahene gets ready to send a ball for Muskegon. Photo/Leo Valdez 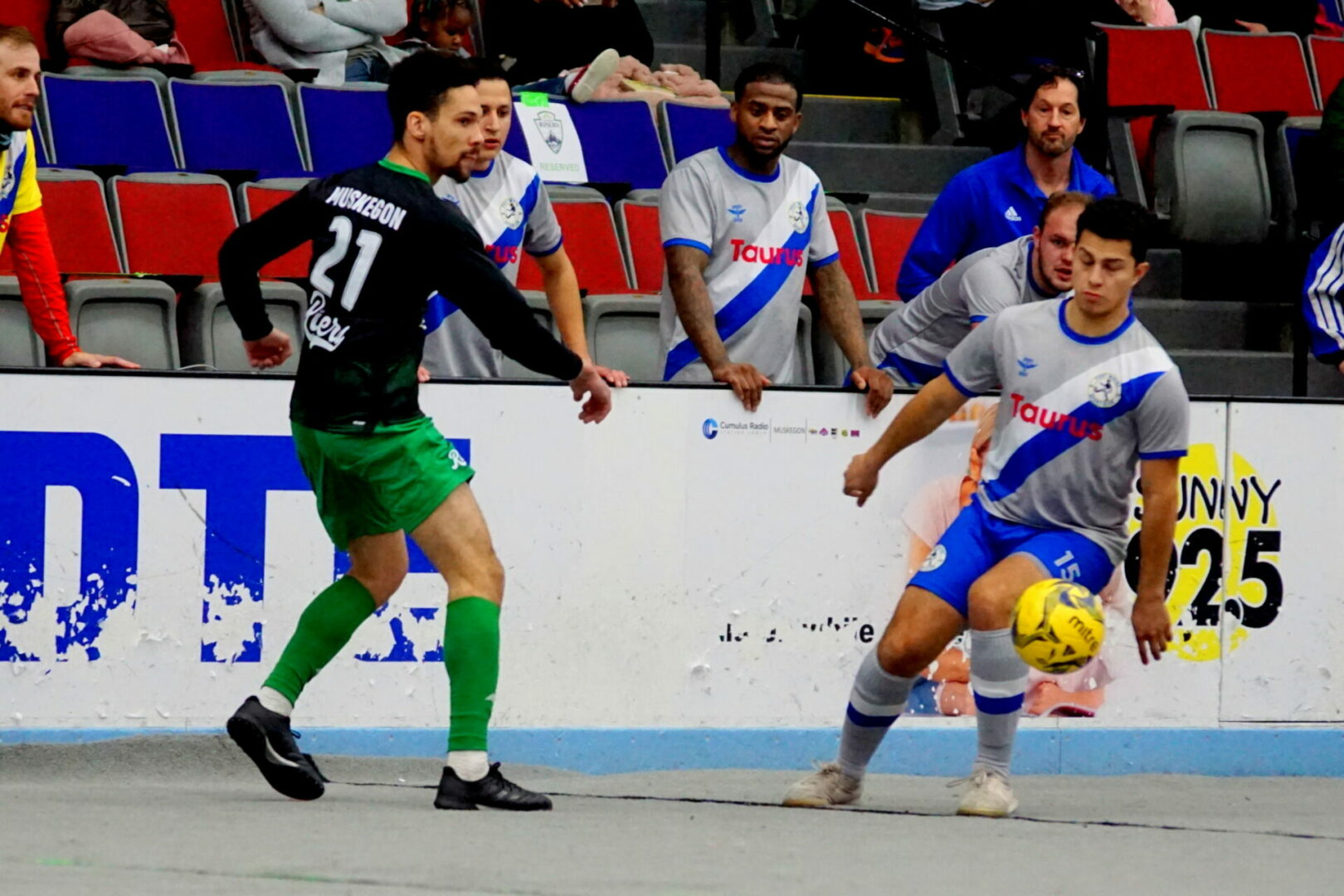 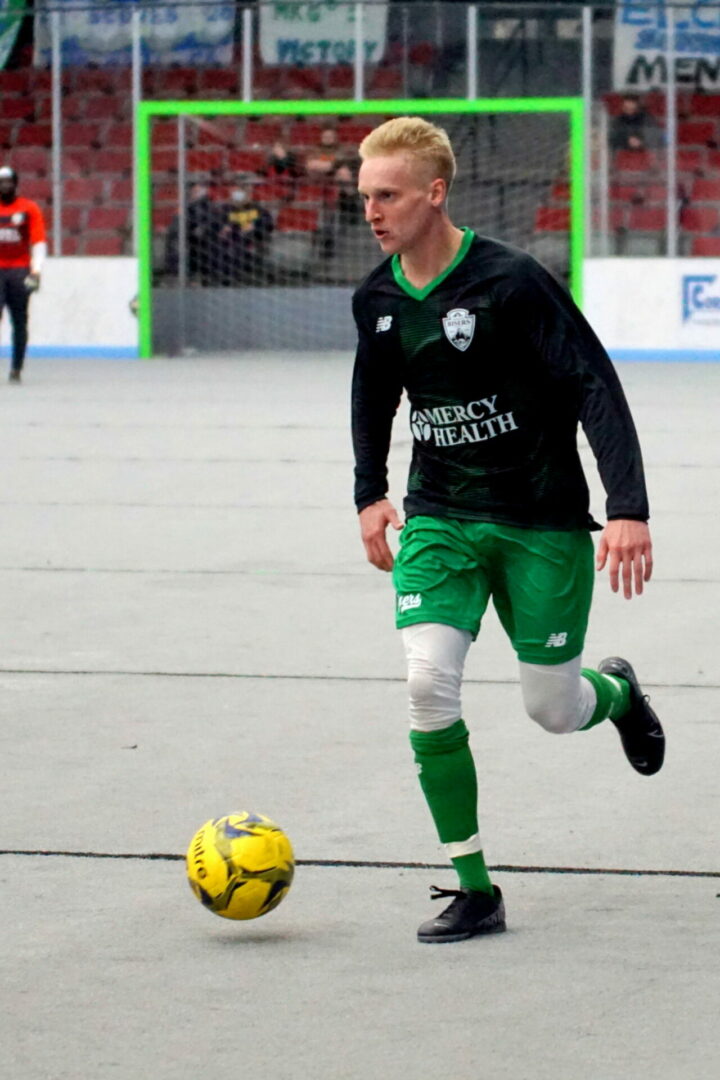 Colin O’Keefe manages the possession for the Risers. Photo/Leo Valdez 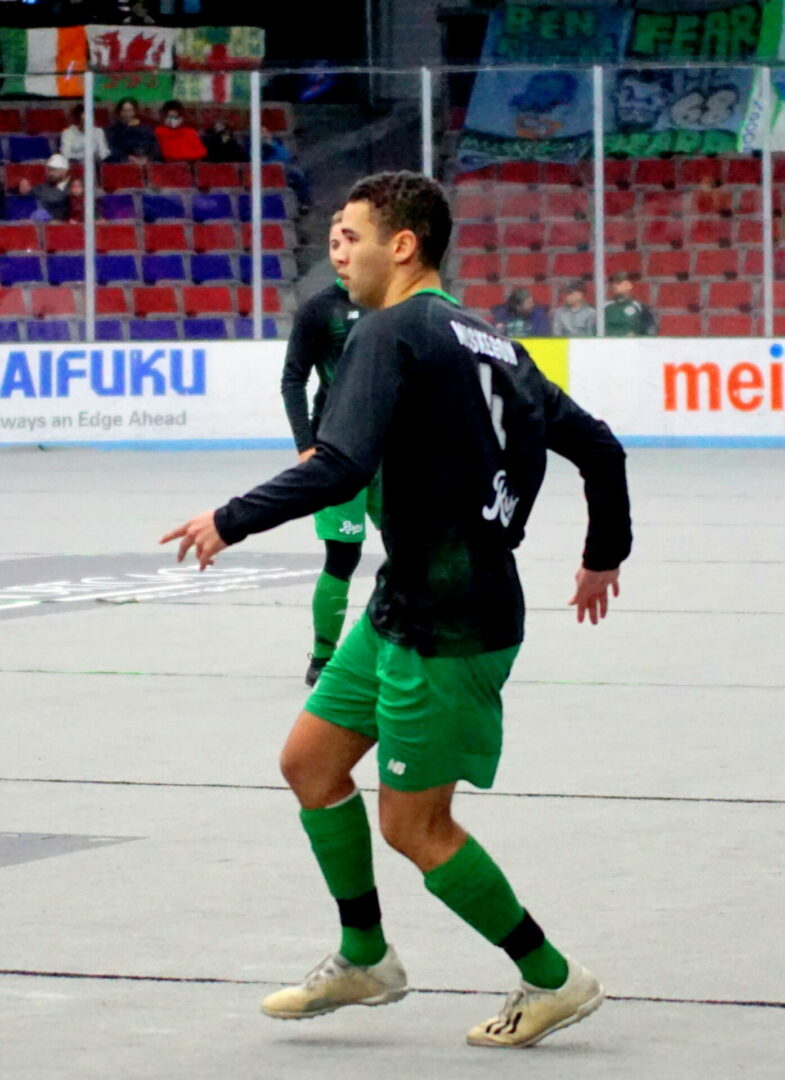 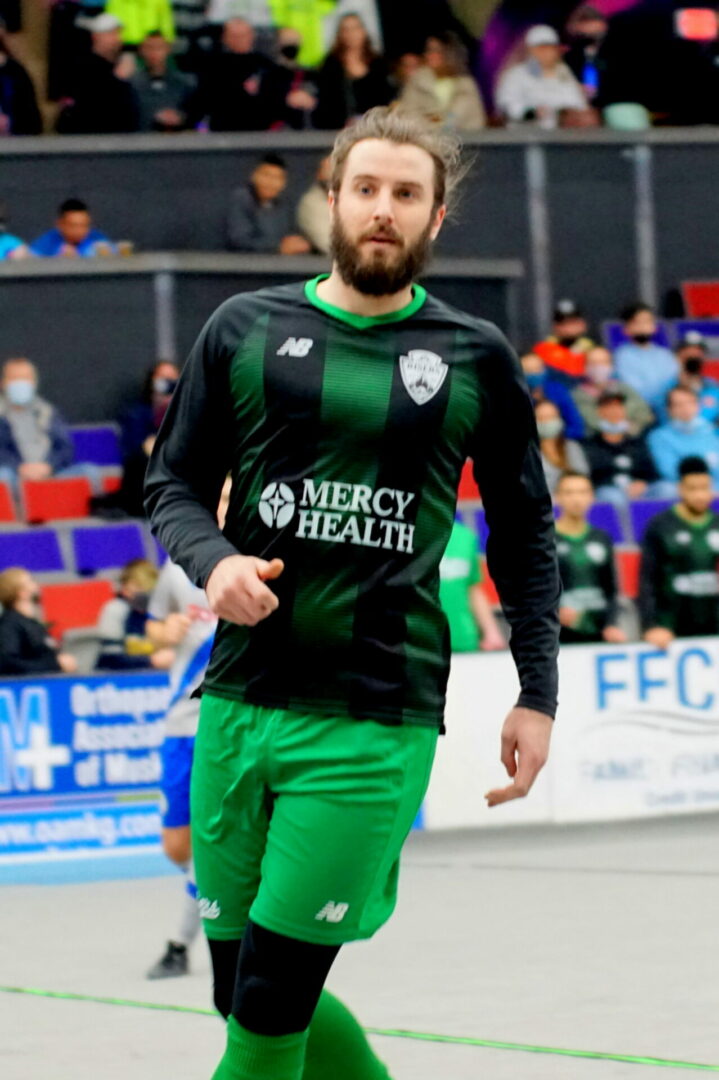 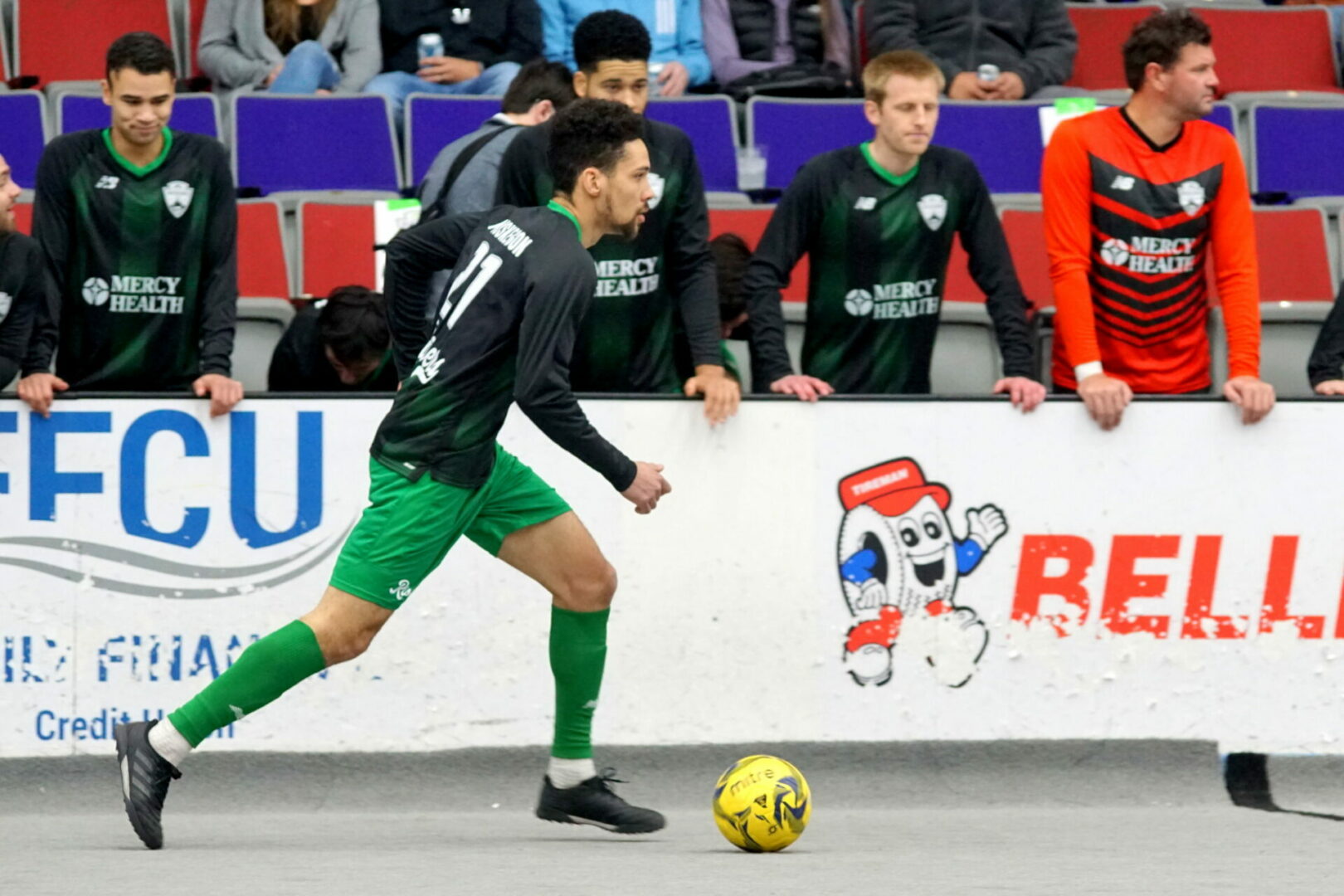 Greg Williams moves the ball along the boards for the Risers. Photo/Leo Valdez

Lumberjacks win another game convincingly, defeat Madison by a 7-1 margin