FRUITPORT – Don’t tell the Muskegon Catholic Central Crusaders they might be an underdog at tournament time, just because they had a rough regular season.

As they showed on Tuesday, they are quite capable of coming to life and dominating a game. 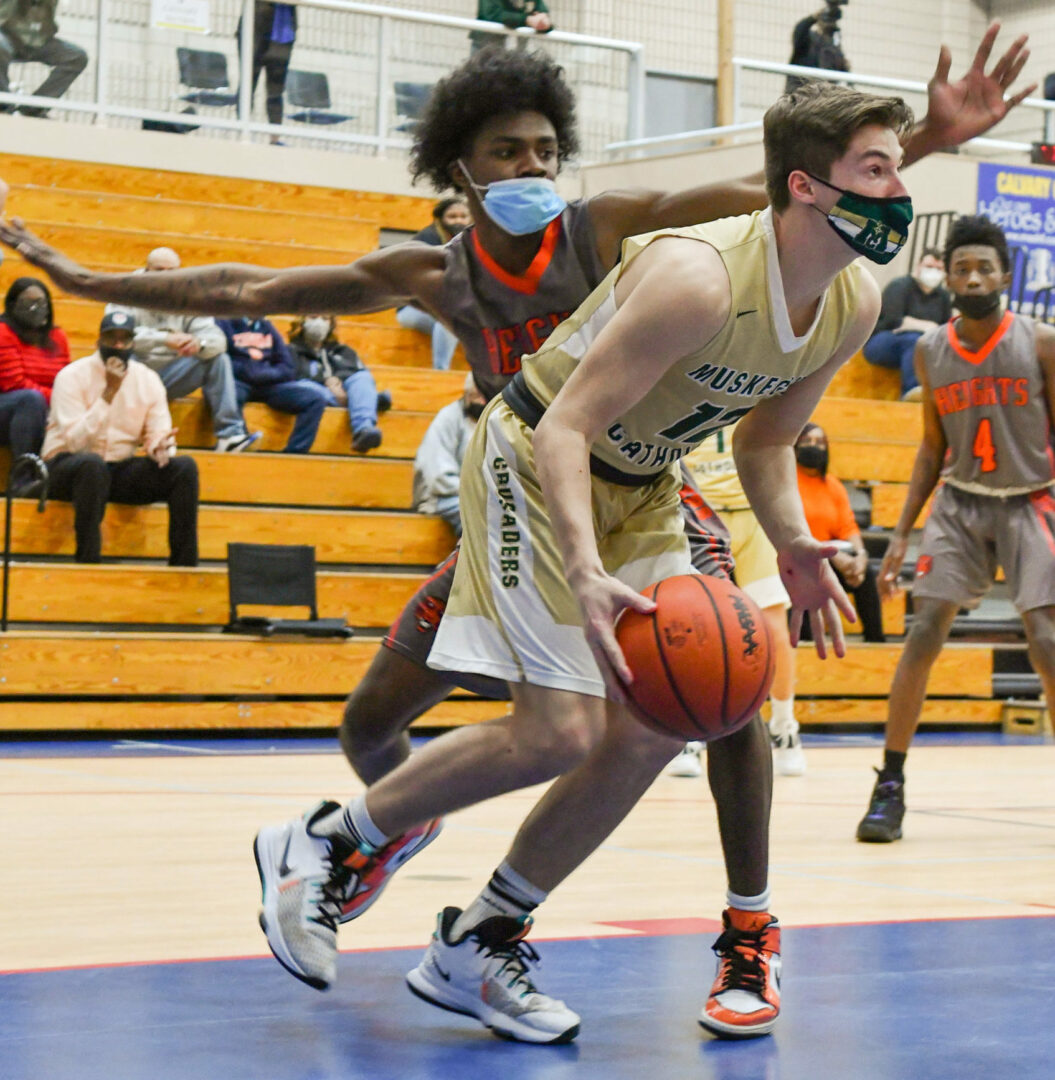 MCC’s Tommy Kartes gets ready to go up under the hoop. Photo/Michael Banka

Muskegon Catholic squared off against Muskegon Heights on Tuesday in the first round of the Division 4 district tournament at Fruitport Calvary Christian High School.

Tommy Kartes totaled 30 points and 12 rebounds for the Crusaders and they rolled to a surprisingly easy 60-38 victory over the Tigers and advanced to Thursday’s district championship game against Holland Calvary Christian.

It was a nice performance for a team that finished the regular season with a 4-9 record.

“The thing about the tournament, everybody starts out zero and zero, and that’s what I told the kids,” said Muskegon Catholic Coach Lamar Jordan. “There is no record anymore, we just got to win one game at a time, and that’s what we were able to do tonight.” 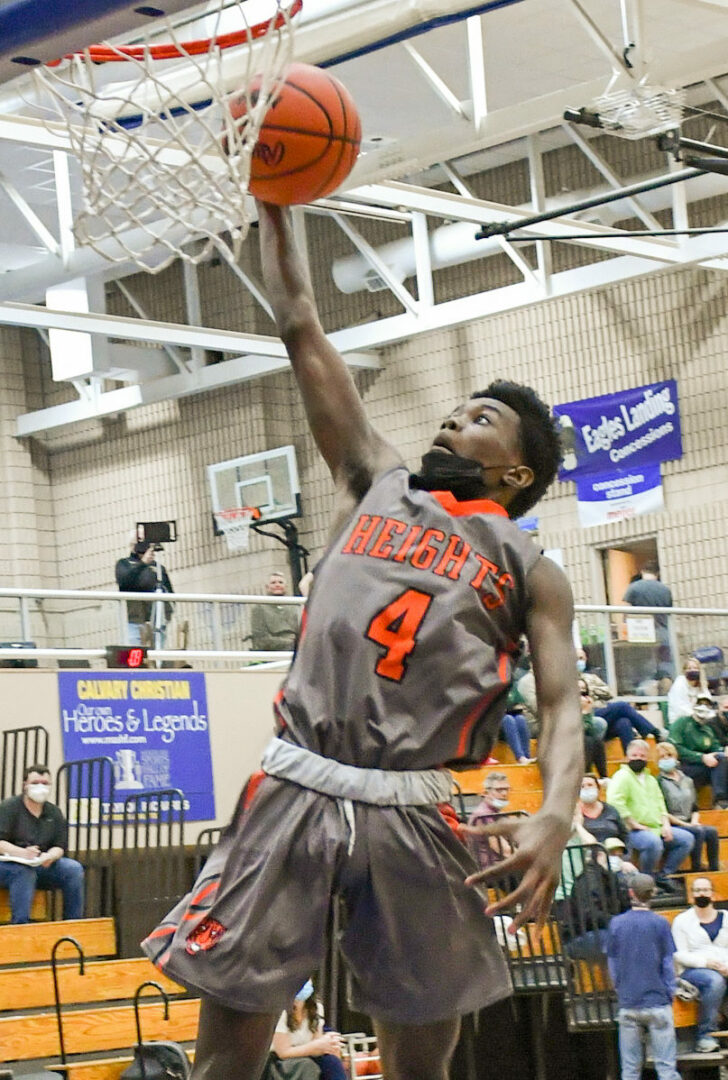 The Crusaders got off to a great start, leading 13-4 after one quarter. They pulled ahead 11-1 with a 7-0 run, fueled by a triple by Max Price and a bucket and two free throws by Lucas Carlton.

“This is probably the best start we’ve had all year in that first quarter,” Jordan said.  “We were able to break their press and get some easy baskets.”

MCC continued to pull away in the second quarter, outscoring the Tigers 23-9 and leading 36-13 at halftime. Kartes led the uprising with nine points in the quarter while Price and Dane Rutz added four points apiece.

The game was more even in the third quarter, with Muskegon Heights having a 14-12 edge. Ja’Kari Edwards led the Tigers with five points in the quarter while Bryant Spencer Jr. added four.

Kartes had six points in the third for MCC while Jaden Johnson added five, and the Crusaders still led 48-27 heading into the fourth.

Kartes scored another seven points in the final eight minutes as MCC nailed down the victory and stayed alive in the tournament.

Johnson finished with nine points and 13 rebounds for the Crusaders.

Coach Jordan had some good things to say about Kartes after the game.

“He’s the rock, he’s the guy that’s gonna run through a wall for you when you ask him to,” Jordan said. 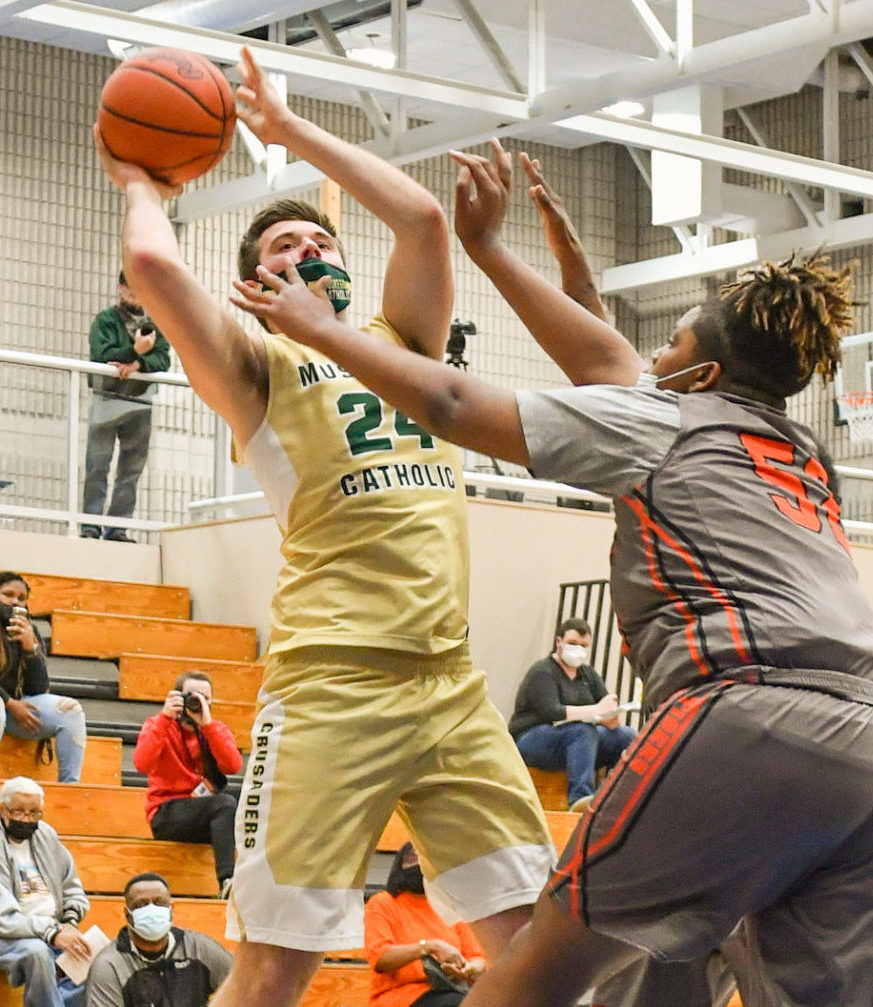 For Muskegon Heights, the game marked the end of a very short season that started very late, because the school’s Board of Education did not give the green light for the team to play until late in the campaign, due to ongoing COVID concerns.

“We were not having sports, and then all of the sudden, with about a month left, we had sports, and so we were literally pulling guys in that played on the team the year before,” said Tigers coach Del Stewart, whose team finished with a 1-5 record.

“At this point it was just about us going out and giving our best effort. I mean there is no more pressure. You can chip back into the ball game, but at the same time, if things don’t work out they don’t work out.”

Muskegon Heights finished the season with a 1-5 record. 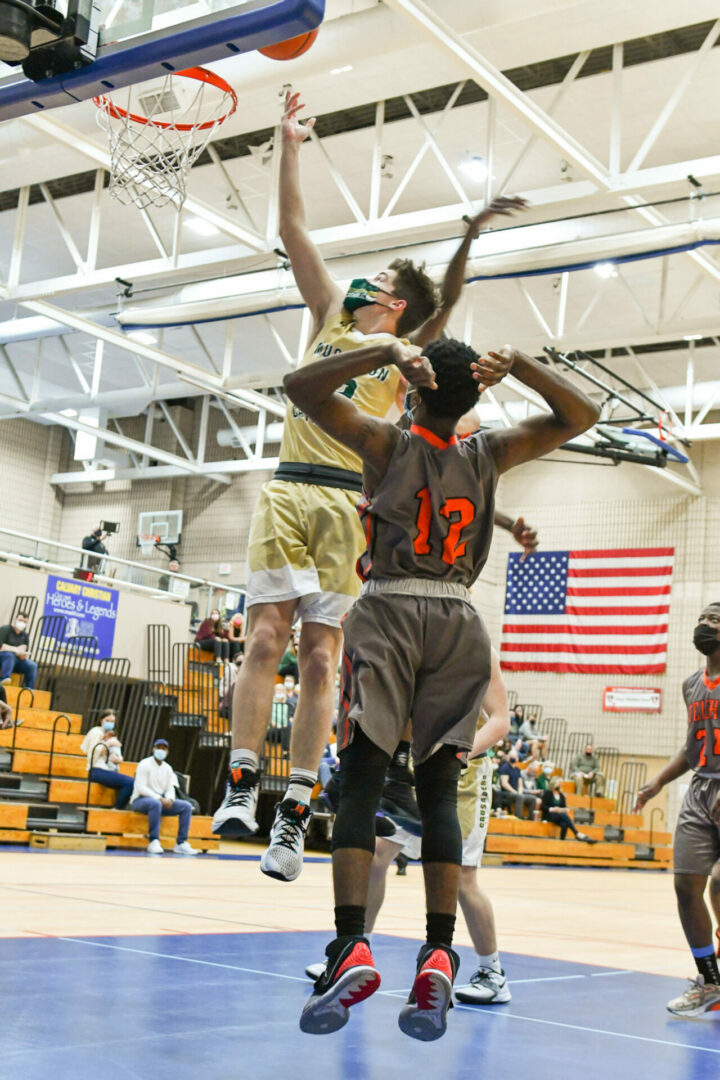 Tommy Kartes glides in for a layup in front of Muskegon Heights’ No. 12 Jon’athan Moore. Photo/Michael Banka 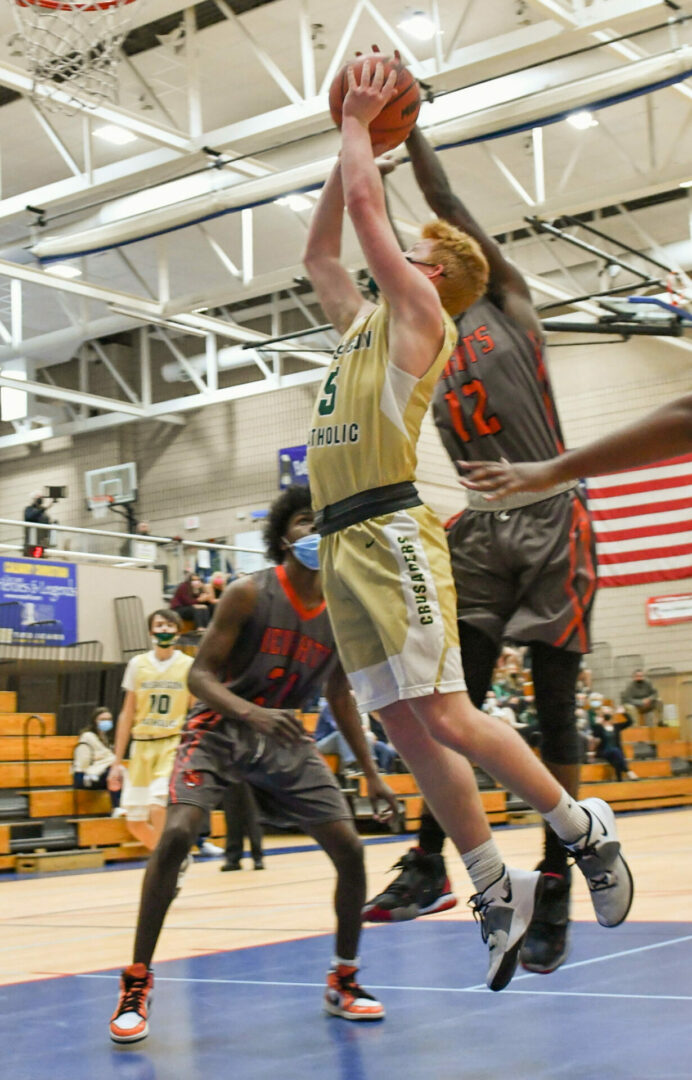 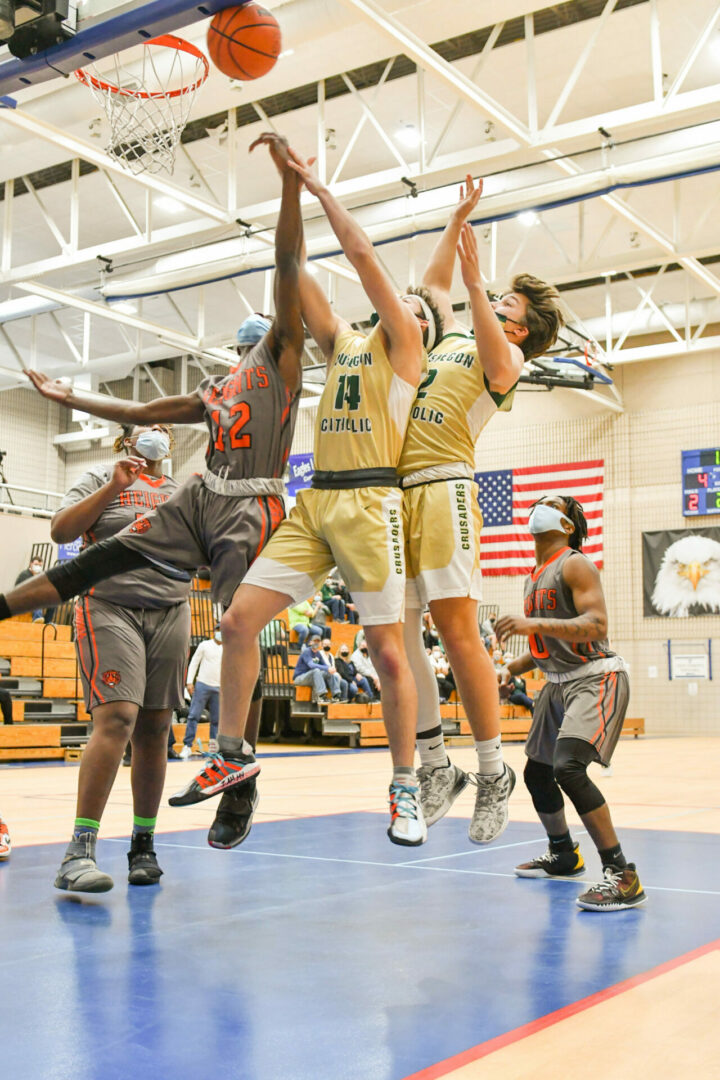 Muskegon Height’s No. 12 Jon’athan Moore reaches stretches out to block the shot of MCC’s No. 14 Hunter Schrink and Tommy Kartes. Photo/Michael Banka 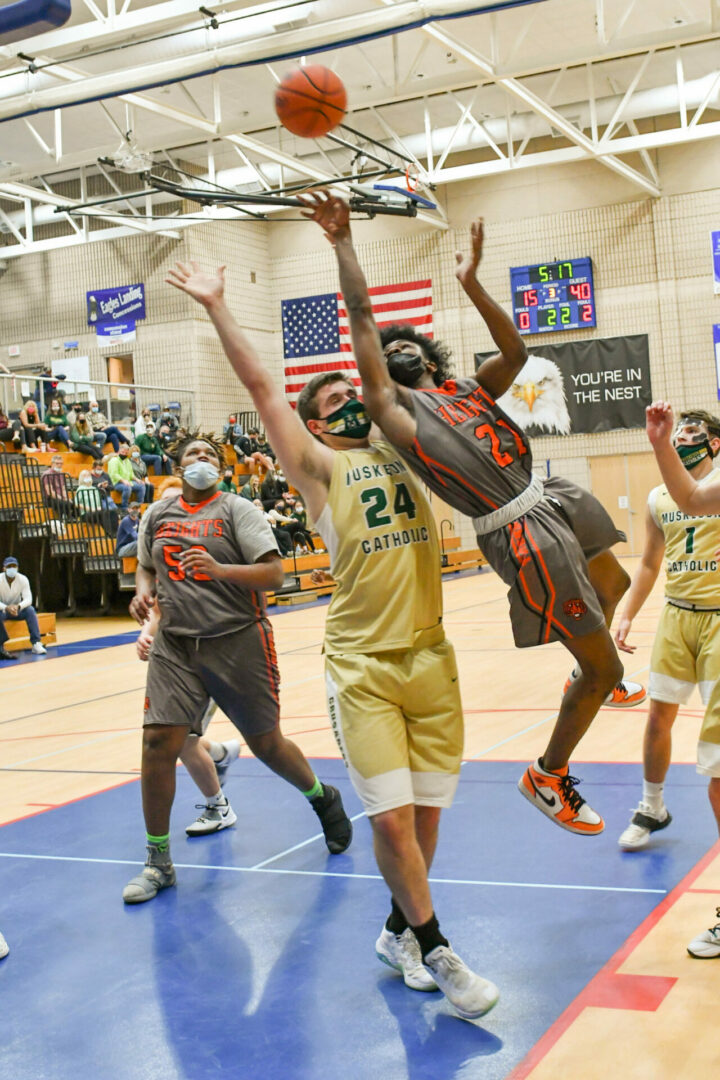 DaCarri Moore tries to get a shot around MCC’s Jaden Johnson. Photo/Michael Banka 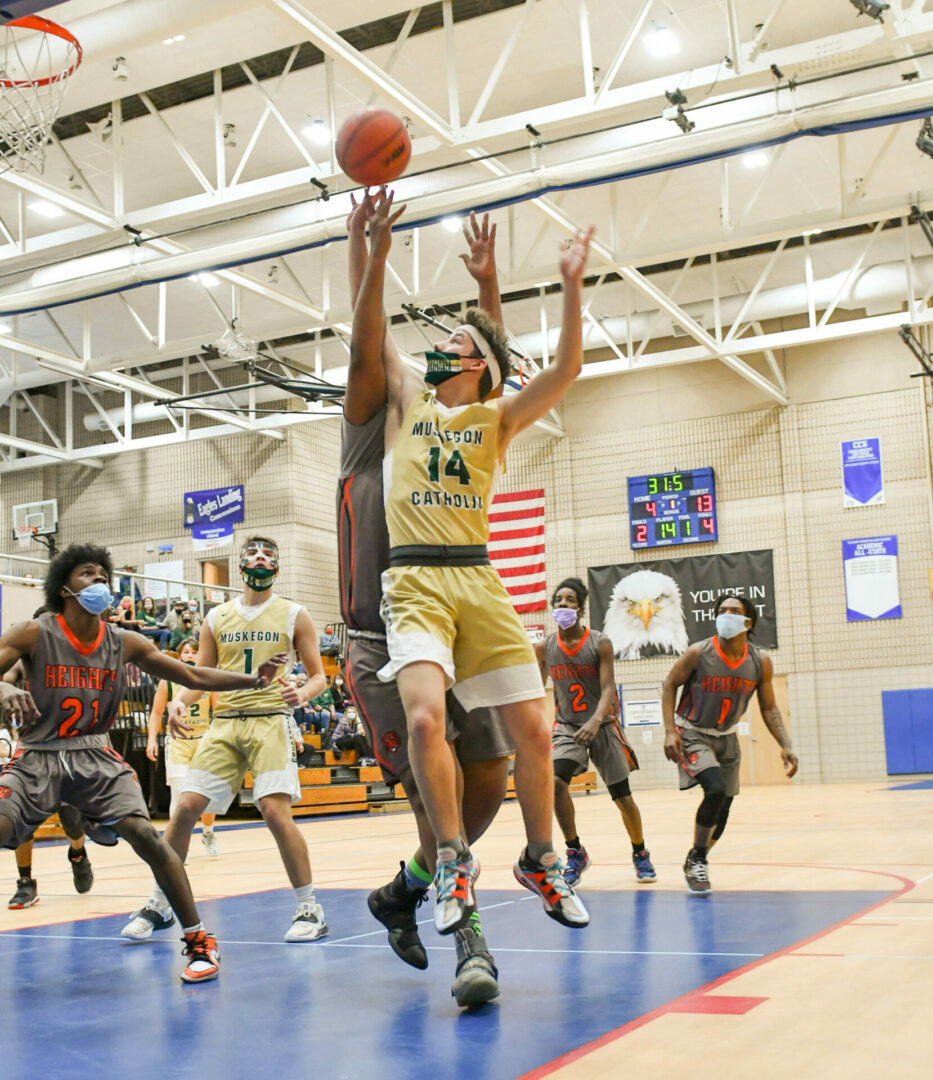 MCC’s Hunter Schrink goes up for a shot. Photo/Michael Banka