Kyle Beebe nailed a shot from just inside the half-court line to propel the Ravenna boys basketball team to a 64-62 overtime win over Montague in a West Michigan Conference game on Tuesday. 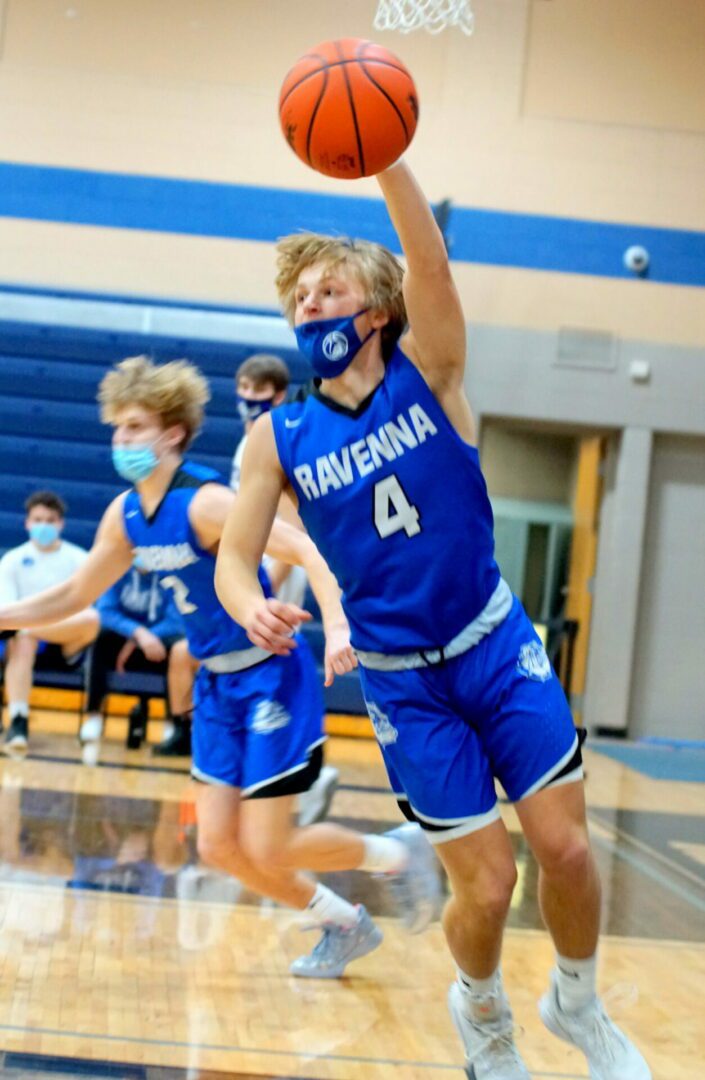 Ravenna’s No. 4 Hunter Hogan grabs a loose ball and takes it up court. Photo/Leo Valdez

Ravenna trailed 13-10 after the opening quarter and 25-21 at the halftime break. The Bulldogs cut their deficit to 43-40 heading into the final quarter of regulations.

The Bulldogs closed regulation by going on a 15-12 run to tie the game at 55-55 and force overtime. Ravenna outscored the Wildcats by a slim 9-7 margin in overtime.

The Wildcats were paced by Isaiah Atchison with 16 points, while Drew Collins contributed with 13 points and four assists. Braeden Johnston had 10 points. 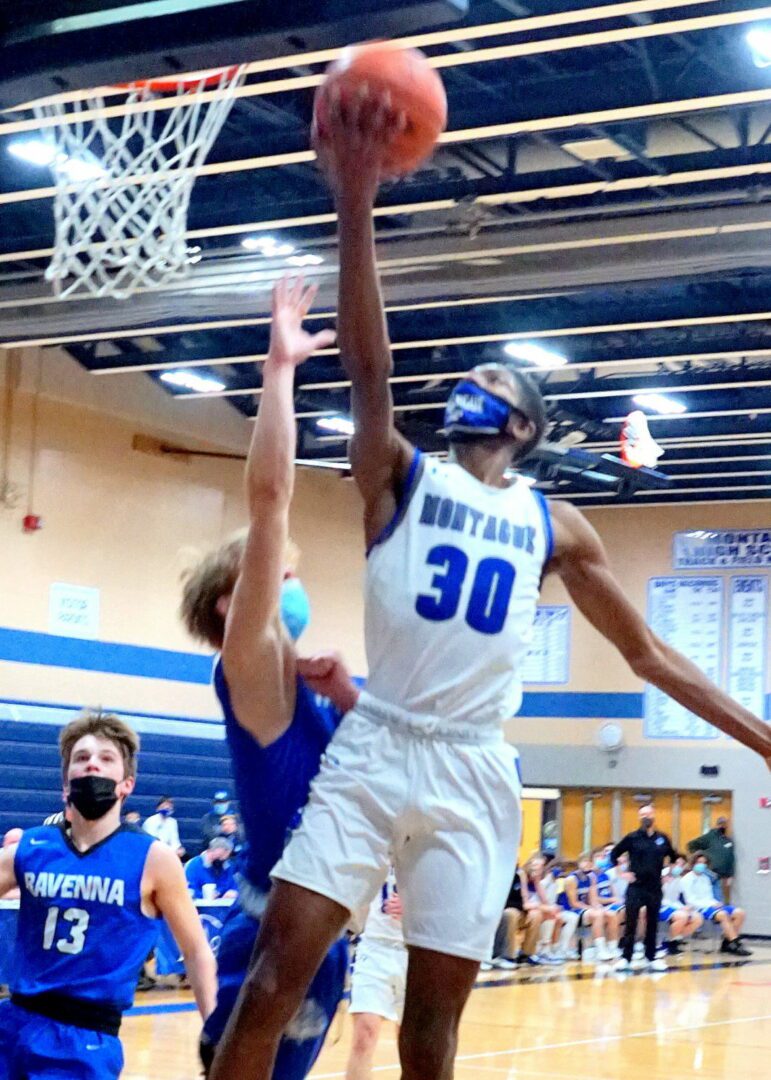 The Spartans were led by Will Chye with 18 points, while Jayden Perrone finished with 13.

The Norse improved to 3-4 overall, while Mason County Central fell to 0-9 overall.

WHITEHALL 52, SHELBY 47 – The Vikings continued their perfect season in league play with a West Michigan Conference win on Tuesday.

Shelby had the momentum early, jumping out to a 13-10 lead in the first quarter before the Vikings came back to take a 27-26 advantage at halftime.

The Tigers went on a 19-13 run during the third quarter to take a 45-40 lead heading into the final stanza before Whitehall stormed back with a 12-2 fourth run to close out the comeback win. 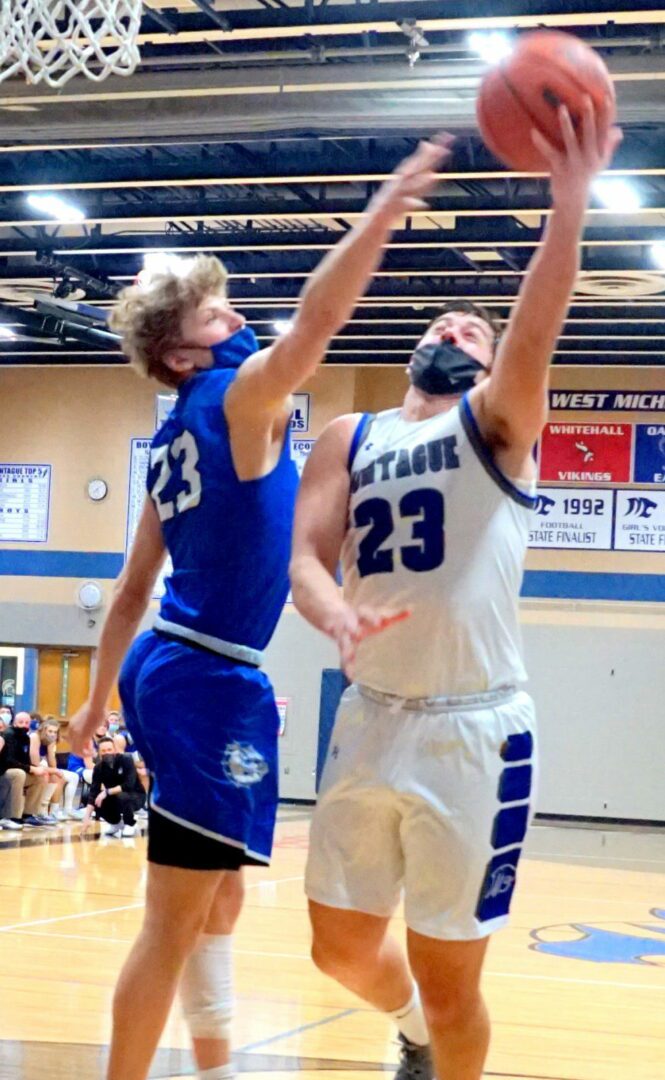 Dayton Cole led the Vikings with 14 points, while Addison Bluhm added 13 and Andrew Durbin chipped in with 10.

Luke Martin paced the Eagles with 17 points, while Ethan Jozsa scored 13 and Hunter Delora chipped in with nine.

The Pirates were led by Parker Hoovey with 12 points while Tony Rayo and Zach Bitely each chipped in with eight.

The Red Devils improved to 9-1 overall, and 6-0 in conference play.

MUSKEGON 55, ZEELAND WEST 30 – The Big Reds improved to 7-3 on the season and 7-1 in league play with an O-K Green Conference victory on Tuesday.

The Big Reds never looked back after that, scoring 14 points in both the third and fourth quarters while holding Zeeland West to 17 points total in the second half.

WYOMING 71, REETHS-PUFFER 65 – The Rockets dropped to a .500 winning percentage after an O-K Green Conference defeat on Tuesday night.

Travis Ambrose led the way for Reeths Puffer with 17 points and 13 rebounds.

Kaleb Mitchelson added 16 points for the Rockets, while Jaxson Whitaker chipped in with 15 and Kendall Smith put up 14.

Reeths Puffer is now 5-5 on the season and 4-4 in the O-K Green Conference play.

The Sailors jumped out to a 17-3 lead after the opening quarter and 38-6 at halftime. Mona Shores’ lead was cut to 46-20 heading into the fourth quarter.

Peyton Lacombe recorded 13 points and nine rebounds for Ludingtion, while Dylan Eaton chipped in with 11 points.

The Orioles outscored Manistee 16-6 in the first quarter and 14-10 in the second quarter to take a 30-16 lead into halftime.

Ludington extended the lead to 51-30 at the start of the final quarter of play.

The Orioles improved to 5-4 overall and 3-3 in conference play.

Orchard View jumped out to a 16-7 lead after the first quarter before exploding for 26 second quarter points to take a 42-26 advantage at halftime.

The Cardinals extended their lead to 64-37 heading into the final quarter. MCC closed out the game with a 21-11 fourth quarter run.

The Crusaders were paced by Tommy Kartes with 16 points and eight rebounds, while Jaden Johnson added 15 points, 10 rebounds and three blocks. Lucas Carlton chipped in 12 points and six rebounds.

WESTERN MICHIGAN CHRISTIAN 59, MUSKEGON HEIGHTS 50 – The Warriors led 13-9 after the first quarter, then trailed 24-20 at halftime.

WMC went on a 21-10 run during the third quarter to take a 41-34 advantage heading into the fourth.

Spring Lake struggled offensively, going 4-for-21 from the floor in the first half, including 0-for-9 from three-point range.

Holland Christian hit seven three-point baskets in the first half and went into the break with a 35-11 lead. Both teams scored 22 points during the second half.

Kaden George led the Lakers in scoring with nine points, while Callum Saxe had six and Hunter Throop added five.

Spring Lake is now 2-5 overall and in the O-K Blue Conference.

Braden Cohea paced the Eagles with 17 points and seven rebounds, while Jacob May added 17 points and Bradley Richards chipped in with 12 points and 10 rebounds.

The Eagles improved to 5-3 overall and 3-2 in conference play.

Big Rapids Crossroads outscored the Panthers 21-14 in the first quarter and 13-8 in the second quarter to take a 34-22 lead at halftime.

The Panthers cut into the lead, outscoring the Cougars 20-15 in the third, making the score 49-42 at the beginning of the fourth quarter. But Hesperia could not complete the comeback.