MONTAGUE – Runs have sometimes been hard to come by for the Montague baseball team this season, but that certainly wasn’t a problem on Tuesday night.

The Wildcats kept pounding out hits in their doubleheader against rival Whitehall, posting double-digit runs in both games of the sweep.

“We’ve had good pitching and good defense all year, and not a lot of runs were scored, but tonight those bats really came out,” said Montague Coach Kevin Buchberger. 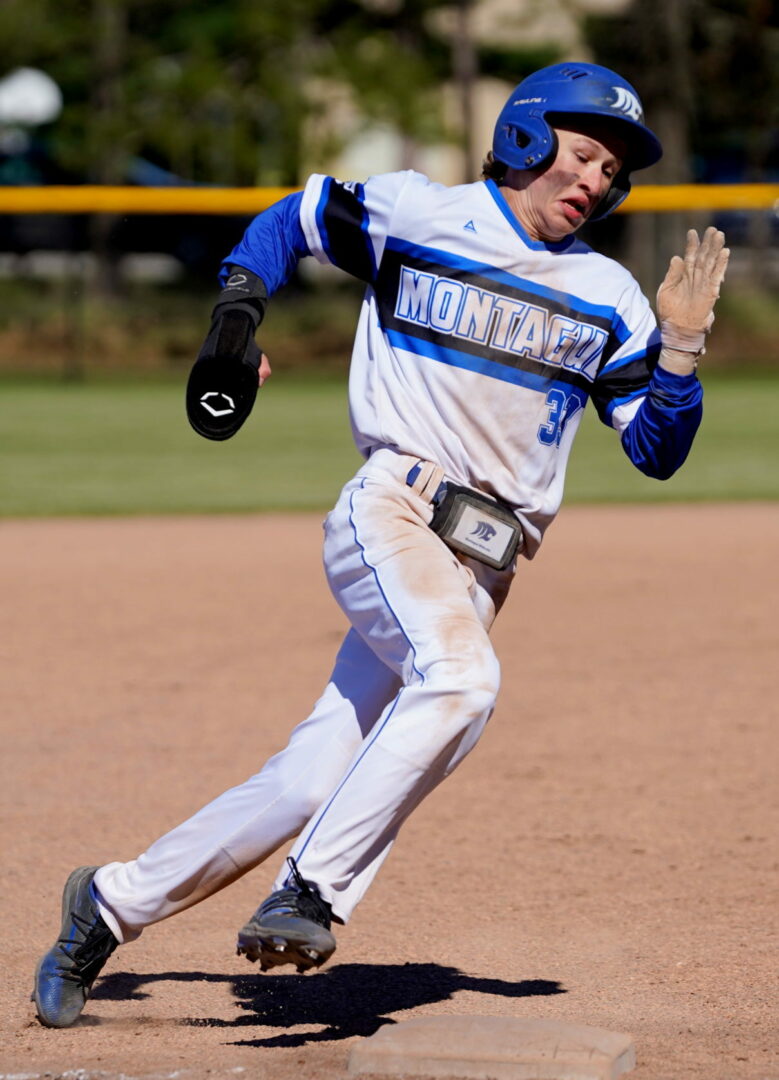 Nick Moss approaches third base and sends it home to score for Montague. Photo/Leo Valdez

The two wins gave Montague a 12-10 overall record, but a sparkling 6-0 mark in conference play. That means the Wildcats, who play a lot of good teams in their non-league schedule, may be far better than their overall record indicates.

“The record is 12-10, but we play a lot of bigger schools, and we’ve been in those games,” Buchberger said. ”We actually had the lead in most of those games, as well, so our guys can play baseball. We have a pretty solid team. We just need to put it all together at the right times.”

In Game 2, Montague led 2-1 lead at the beginning of the second inning, and that quickly turned into a 6-1 lead. Trey Mikkelsen singled and was eventually driven in on a single by Tugg Nichols. Three walks later, Kade Johnson added a two-run single.

Montague scored three times in the third and four times in the fourth to extend its lead to 13-3. During the parade of runs, four different Wildcats had RBI singles while Mikkelsen added a double in the fourth. 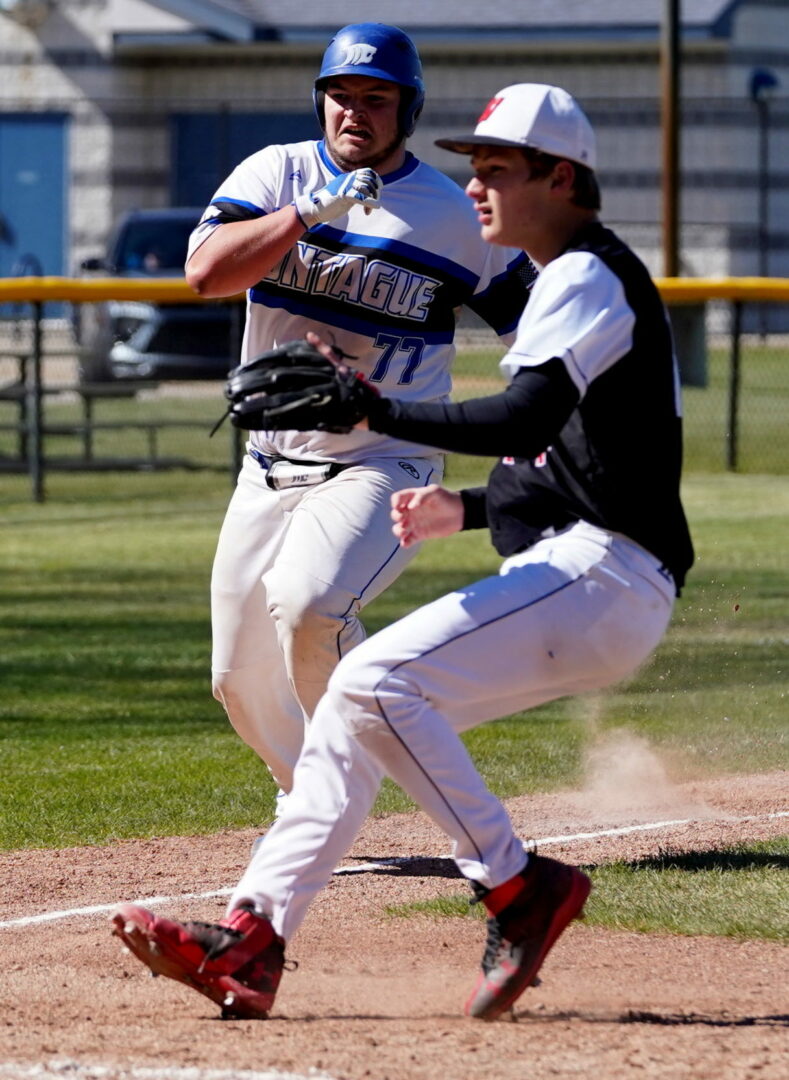 Christian Smolen looks for a throw at home plate as Montague’s No. 77 Hayden McDonald runs in to score after a wild pitch. Photo/Leo Valdez

A single from Mikkelsen, three walks, and a two-RBI single by Hayden McDonald allowed the Wildcats to take a 17-3 lead at the end of the fifth.

The Vikings kicked up their heels in the final inning with a single from Conner Young and an RBI single from Jaden Brinkert, but it wasn’t enough.

Mikkelsen pitched the win for the Wildcats in the second game, allowing three runs on three hits while walking three and striking out six.  Colton Blankstrom came in to relieve Mikkelsen and gave up one run on four hits with two strikeouts to end the game.

In the opener, Montague pitcher Kade Johnson threw a complete game, scattering five hits while striking out nine and walking one. Nick Moss, Aidan Buchberger, Blankstrom, and Johnson all had two RBIs in the first game.

While Montague sizzled, Whitehall struggled oat the plate and in the field.

Ryan Brandenburg led the Vikings with two singles in Game 2 while five other batters recorded one hit. Brinkert was the lone batter to collect an RBI for the Vikings.

Cayden Ritchie started on the mound for the Vikings in Game 2, striking out four and walking seven. Brinkert and Ryan Findorff also pitched in the second game, combining for three strikeouts and three walks.

Whitehall dropped to 7-12 on the season. While the Vikings have been playing better lately, Tuesday’s games were definitely not positives.

“Tonight I really feel like we took a step backward,” said Whitehall Coach Warren Zweigle. “It’s hard for me to look at the game and find a positive in it, and I told that to the kids. We’re not progressing like I’d like us to, and I have to take responsibility as the coach.” 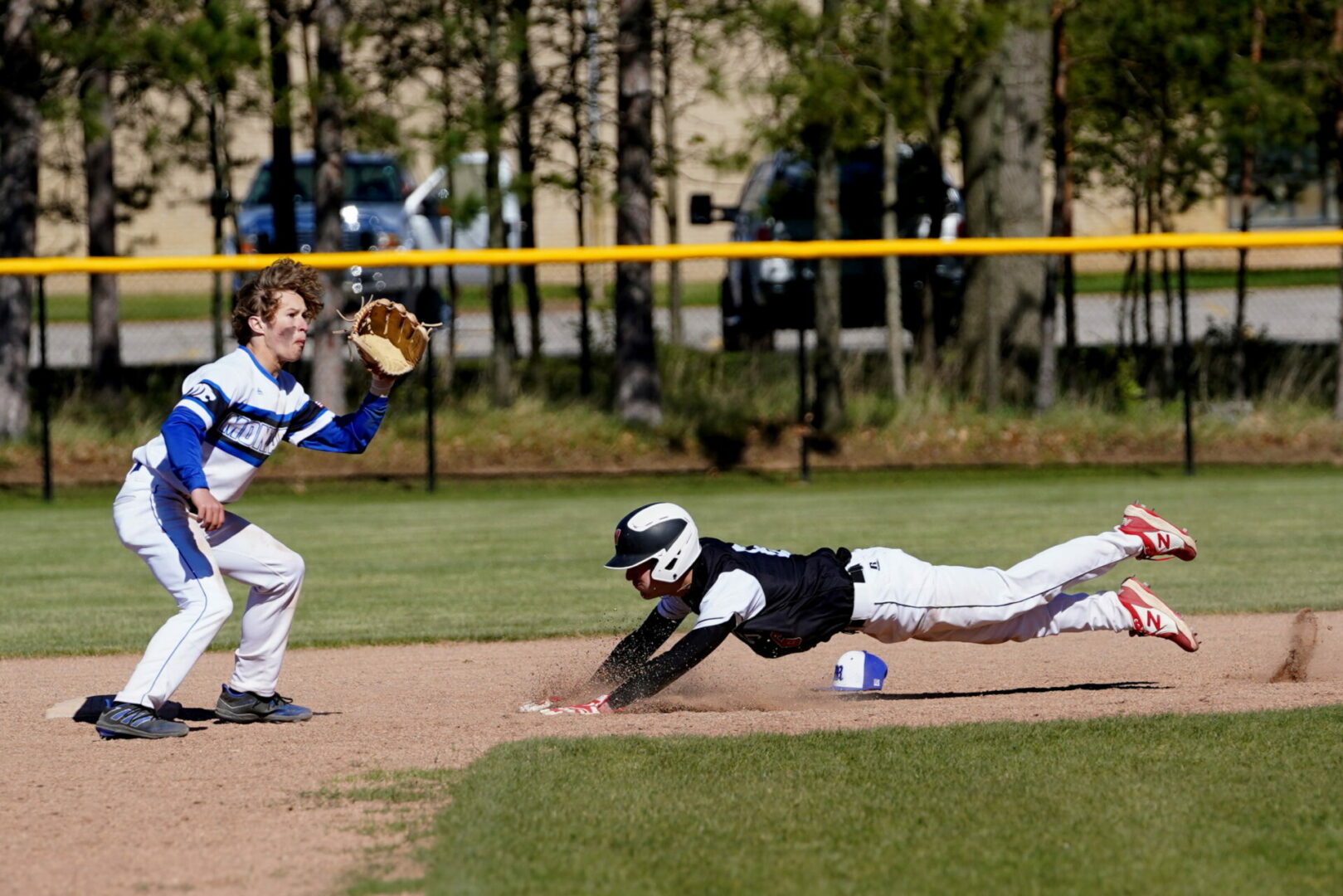 Nick Moss waits for the the throw at second base as Whitehall’s Jack McDowell slides head first. Photo/Leo Valdez 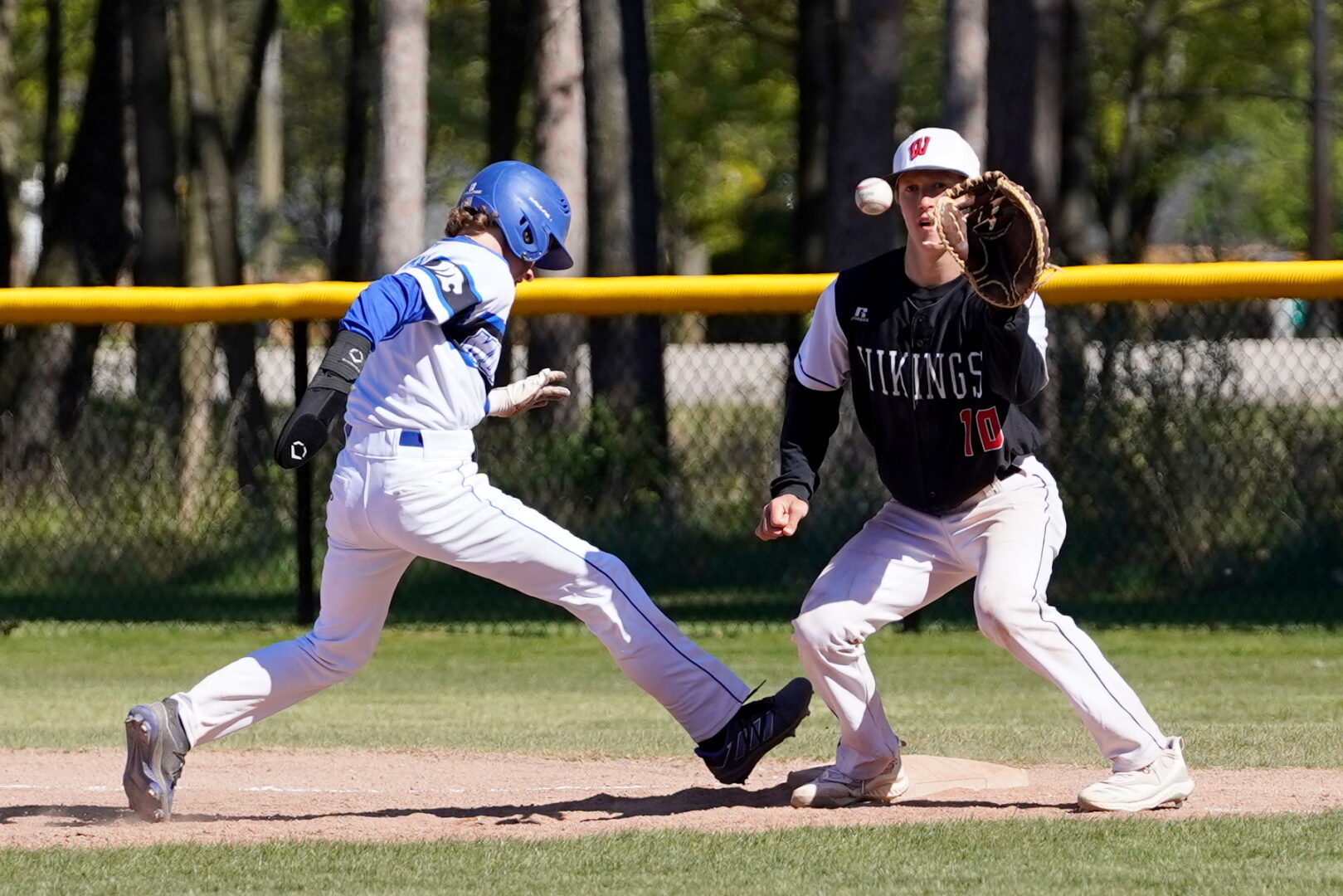 No. 10 Cayden Ritchie gets ready to catch the ball at first base as Montague’s Nick Moss gets back. Photo/Leo Valdez 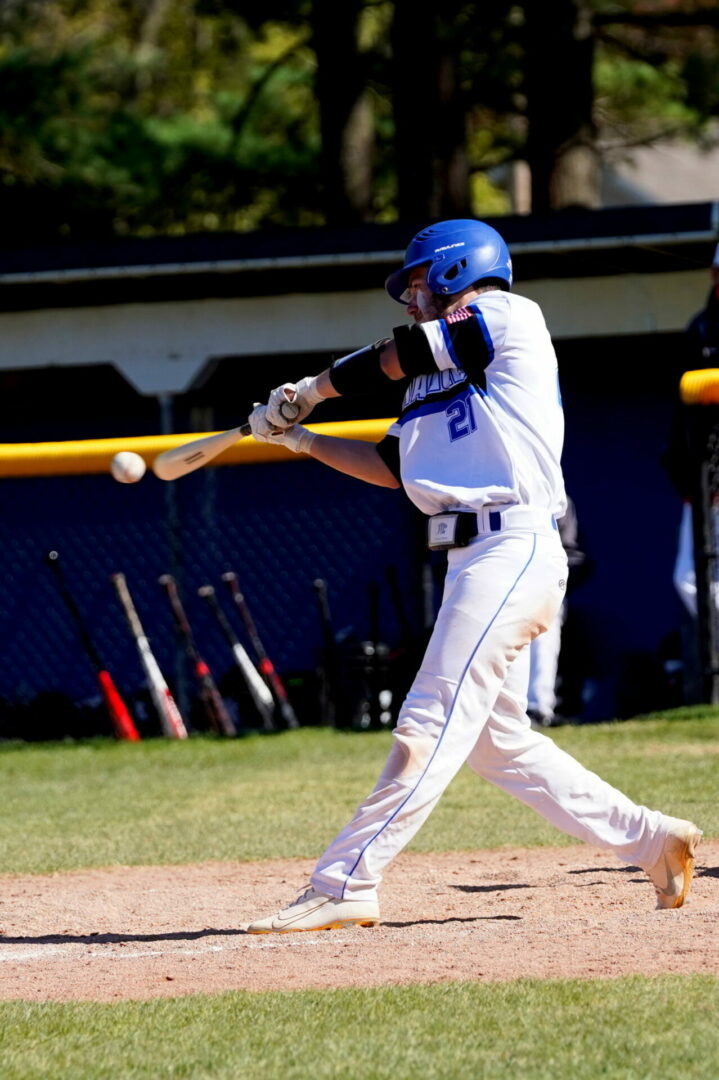 Tugg Nichole gets ready to connect with a pitch for Montague. Photo/Leo Valdez 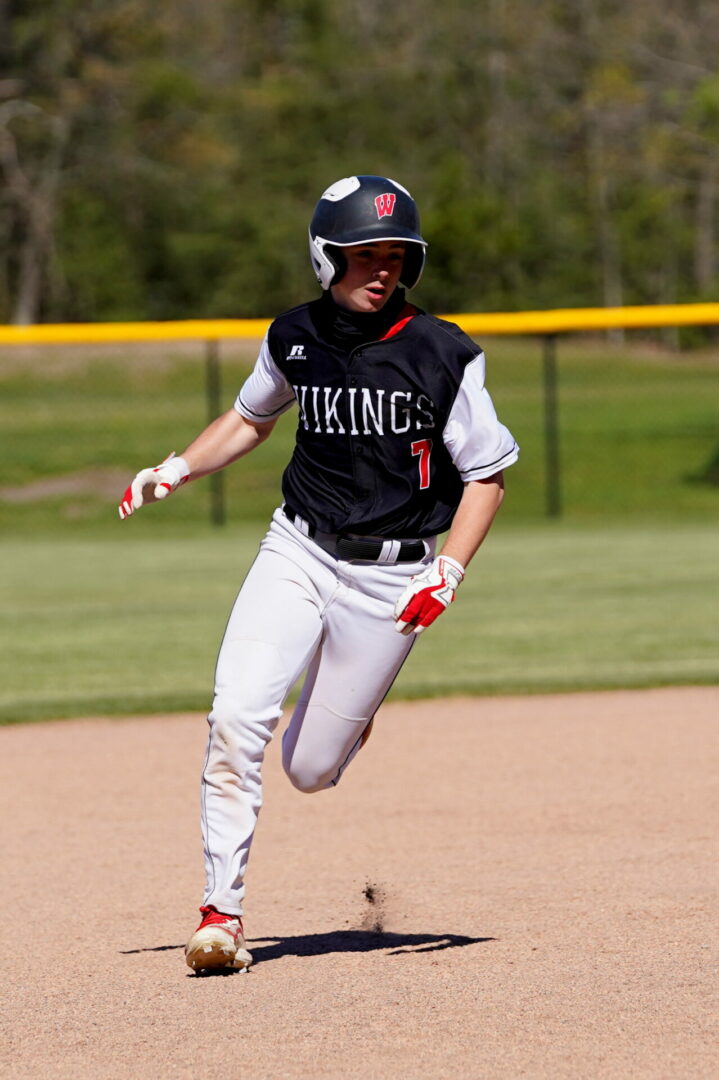 Ryan Brandenburg looks to round third base for Whitehall. Photo/Leo Valdez 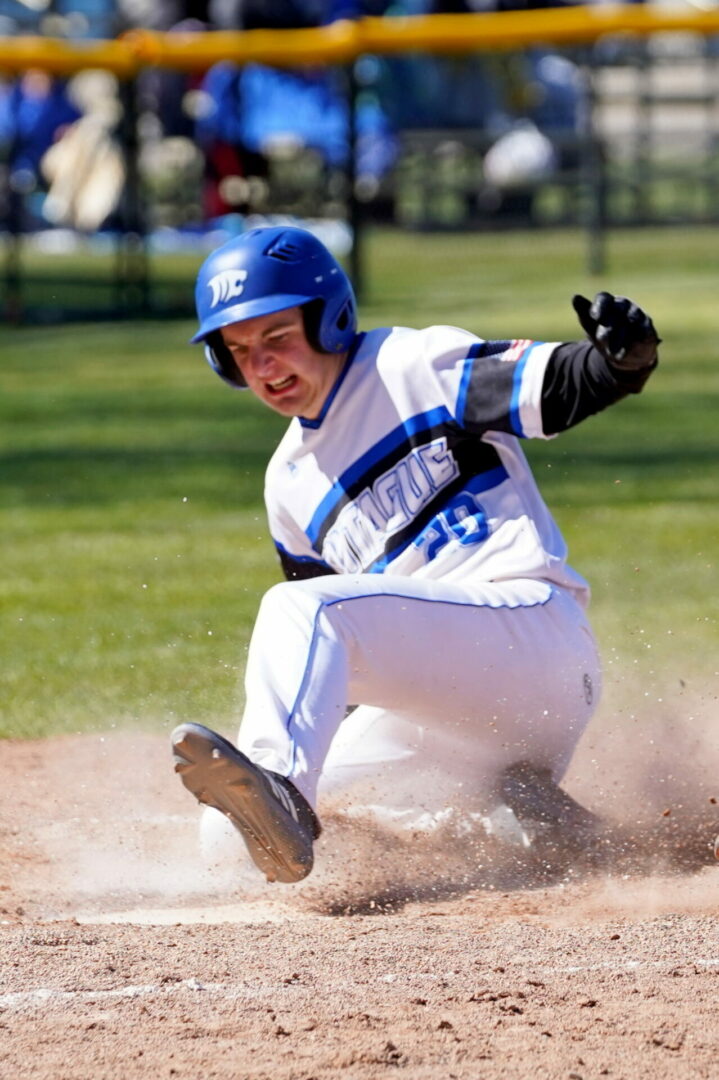 Aidan Buchberger grimace as he slides in to score a run for Montague. Photo/Leo Valdez 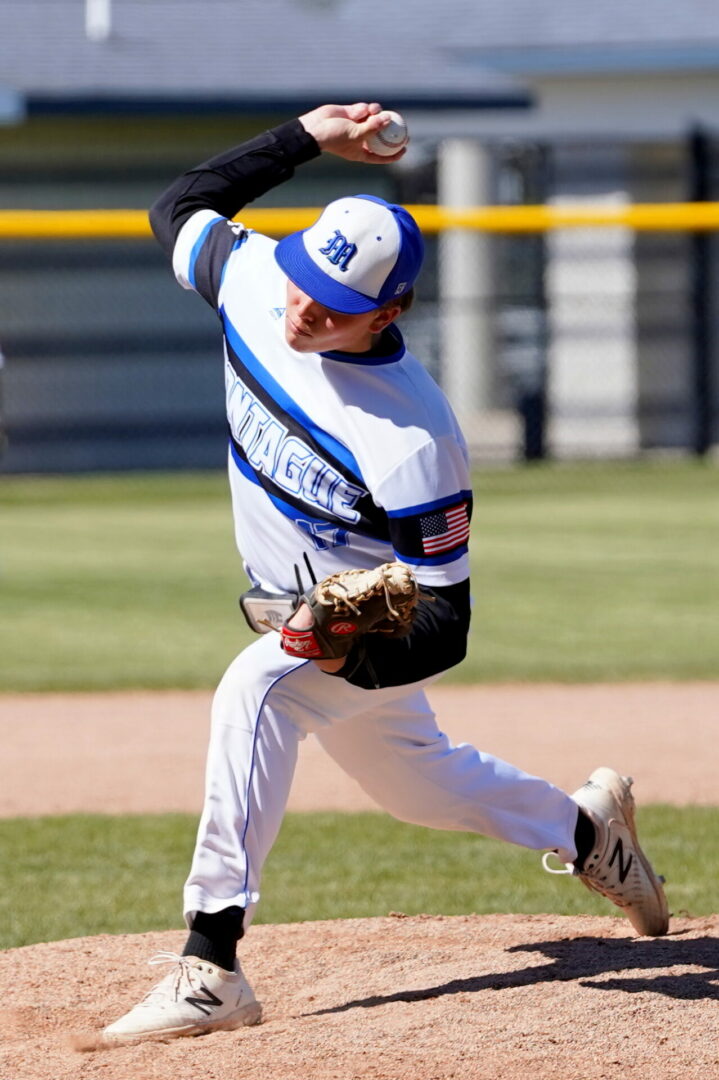 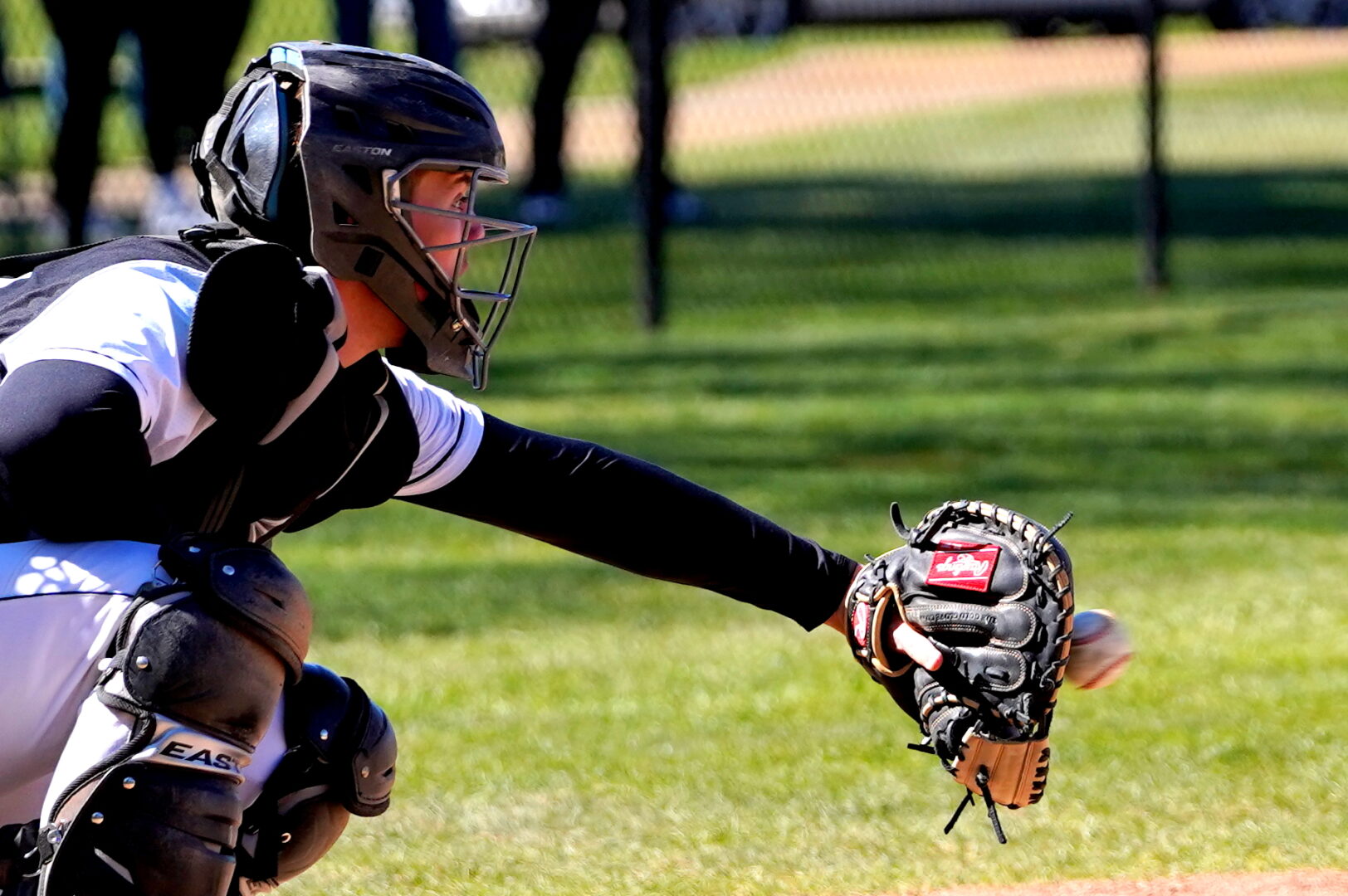 Whitehall catcher Aiden Raymond gets ready for a pitch to come in. Photo/Leo Valdez 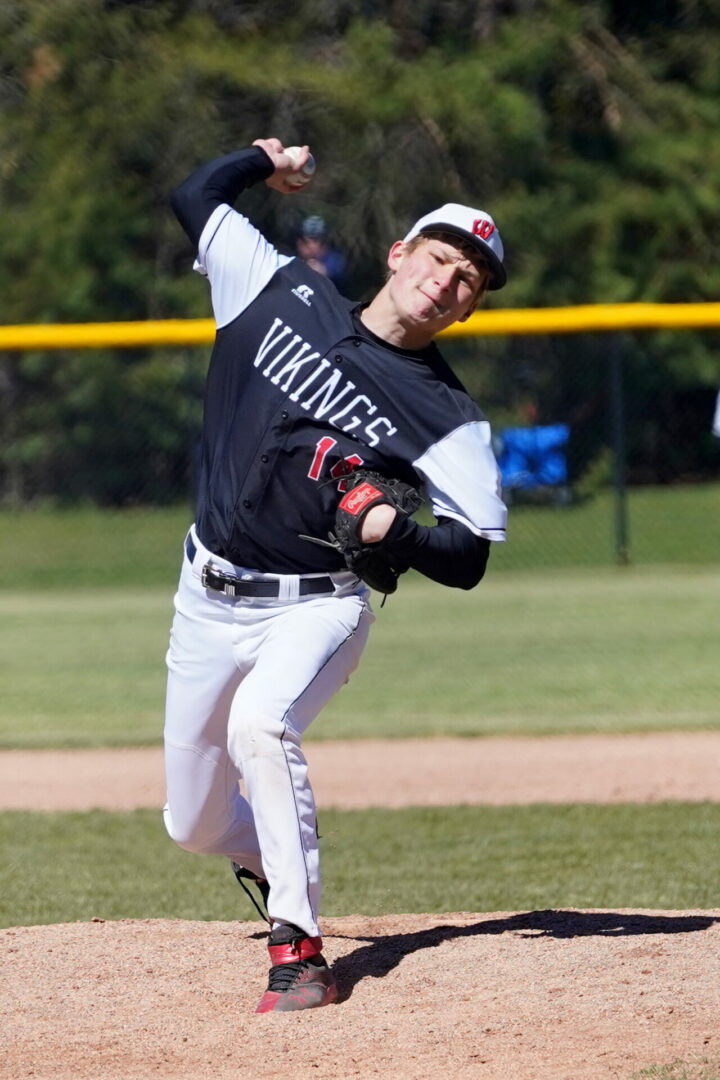 Christian Smolen leans back as he gets ready to throw a pitch home for Whitehall. Photo/Leo Valdez

Saturday wrestling roundup: Hart and Reeths-Puffer go 2-1 while Montague goes 1-2 on the day