On a recent 38-degree day in Big Rapids, the veteran coach heard some mumbling about the cold weather, so he decided to address the topic as his team huddled around him after practice on Top Taggart Field.

“Yes, it’s cold and it’s going to get colder,” said the 9th-year Ferris State coach, before relating a story about a Thanksgiving Day practice a few years back when the temperature never got out of single digits.

And with that, the man who won three state championships at Muskegon High School started counting the number of layers he was wearing (five was the total), as his huddled team – undefeated and ranked No. 1 in the country in Division 2 in both major polls – prepared for its Nov. 6 road game at Davenport. 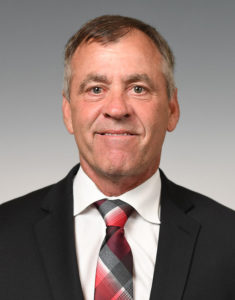 Getting ready to play in the cold is just one of the 1,001 details that Annese worries about as he seeks the only thing that has eluded him since arriving in Big Rapids on Dec. 22, 2011: a Division II national championship.

Ferris has posted an amazing 96-16 (86 percent) record in his time as coach, including four straight Division II quarterfinal appearances and a berth in the 2018 national championship game. The Bulldogs have been incredibly consistent under Annese, winning 37 consecutive regular-season games and 30 consecutive Great Lakes Intercollegiate Athletic Conference games.

Despite all of that success, you get the feeling that the 60-year-old Corunna native will not be completely satisfied until he hoists the national championship trophy.

“I like to think I’ll know when it’s time to stop, but right now I have great energy and passion for it.”

Winner at every level

Ferris clinched at least a share of its third consecutive GLIAC title on Nov. 6 with a dominating 50-14 win at Davenport.

The win was vintage Annese as the Bulldogs rolled up 396 total yards, while holding Davenport to 94 yards. The Bulldogs had a nice mix of 236 yards on the ground and 160 yards through the air – then pulled away with in the second quarter with an 85-yard punt return by Marcus Taylor and a 65-yard interception return by Major Dedmond.

Senior quarterback Jared Bernhardt (6-1, 195), who came to Ferris all the way from Longwood, Fla., with a detour at the University of Maryland, where he happened to be the nation’s top lacrosse player – was the game’s top runner with eight carries for 120 yards and three touchdowns, while completing 9-of-15 passes for 73 yards.

“It’s coach (Annese) and the culture he’s created up here,” said Bernhardt, when asked why he decided to journey 1,300 miles north to play college football. “My dad was a longtime football coach, so we sought out the right coach and the right program and we definitely found it.”

“I think one of the reasons I’ve been successful is just being able to tweak our system to feature the skill set of our players,” said Annese, who played football at Alma College. “This year, we’ve actually thrown for more yards than we’ve ran for. This offense can do a lot of different things and you try to take what the defense is giving you.”

He first made his mark in the high school ranks at Montrose, just down the road from his hometown of Corunna. Annese was 71-11 at Montrose from 1987 to 1994, including six straight undefeated regular seasons and 61 consecutive regular-season wins.

After stops at Ann Arbor Pioneer and Jenison, Annese enjoyed his greatest prep success at Muskegon High, where he posted a 92-15 record in nine seasons, highlighted by state championships in 2004, 2006 and 2008.

Annese left Muskegon after the 2008 season to try his hand in the college ranks. He posted a three-year record of 30-4 at Grand Rapids Community College, before heading up the highway to Ferris in 2011.

Annese is a football coach’s kid, son of legendary Corunna coach Nick Annese, who along with his son is a member of the Michigan High School Football Coaches Association Hall of Fame.

In many ways, he grew up on a football sideline and never left.

History is repeating itself as his son, Steve Annese, has coached with his dad since his first season at Ferris in 2012 and is now the offensive coordinator. His nephew, Tony Annese, who played D1 football at Central Michigan, is the defensive backs coach. His staff features many coaches with Muskegon ties, including Tim and Sam Parker, defensive coordinator Ryan Hodges, and former Mona Shores standout Asantay Brown. Jack Schugars, the former Oakridge head man and the winningest coach in Muskegon-area history, was on the staff for several years and still stops by practices frequently.

Talking with his players, one after the other describes Ferris football as a big family. Big is certainly the operative word at Ferris, with a roster featuring 91 players, who Annese manages to keep content despite the fact that only 11 of them can be on the field at any one time.

“It’s a family atmosphere, for sure,” said sophomore slotback CJ Jefferson (6-2, 180) from Muskegon High. “You can talk to TA about anything; it’s a special connection with him.”

Annese talks about former assistant coaches almost like family members, notably Shane Fairfield at Muskegon and Matt Koziak at Mona Shores. Both of those teams have made regular visits to the state finals using Annese’s trademark veer offense, which forces the defense to stretch out horizontally and defend the entire width of the field, stretching it thin in certain areas.

His influence is now being felt all around the GLIAC, as three of his former assistants at Ferris are now head coaches – Sparky McEwen at Davenport, Ryan Brady at Saginaw Valley and Kyle Nystrom at Northern Michigan.

Will this be the year that Ferris takes the final step and wins it all in Division II?

The Bulldogs will likely finish the regular season ranked No. 1, which would earn them a first-round bye. That means they would have to win four games for the championship, including the final game on Dec. 18 in McKinney, Texas.

Ferris has a special athlete at quarterback this fall in Bernhardt, but he is not a strong downfield passer, so Annese has regularly used both sophomore Mylik Mitchell and junior Evan Cummins in a unique quarterback rotation.

The Bulldogs are huge on the offensive line as all five starters stand 6-5 and weigh more than 300 pounds.

While his teams have always been successful, he hopes to find the magic that he enjoyed from 2004 to 2008, when Muskegon won three titles in five years.

“Those were great years,” said Annese, who lived in the Whitehall area for many years and coached basketball there. “I love the people in Muskegon – there are so many genuinely good people there and they love football.”

Right now, Annese is looking forward to earning a bye week on Nov. 20 so his players and coaches can get a much-needed breather, then reset and refocus for what will then be a 16-team, four-week sprint to the finish.

Even at the age of 60, he feels energized and ready to put it all on the line.

“There are very few jobs where you get to stay this young with people,” said Annese. “This career has allowed me to stay young.

“I still feel like a kid when I’m out there hanging out with these players.”

(All photos below are courtesy of Ferris State University Athletics) 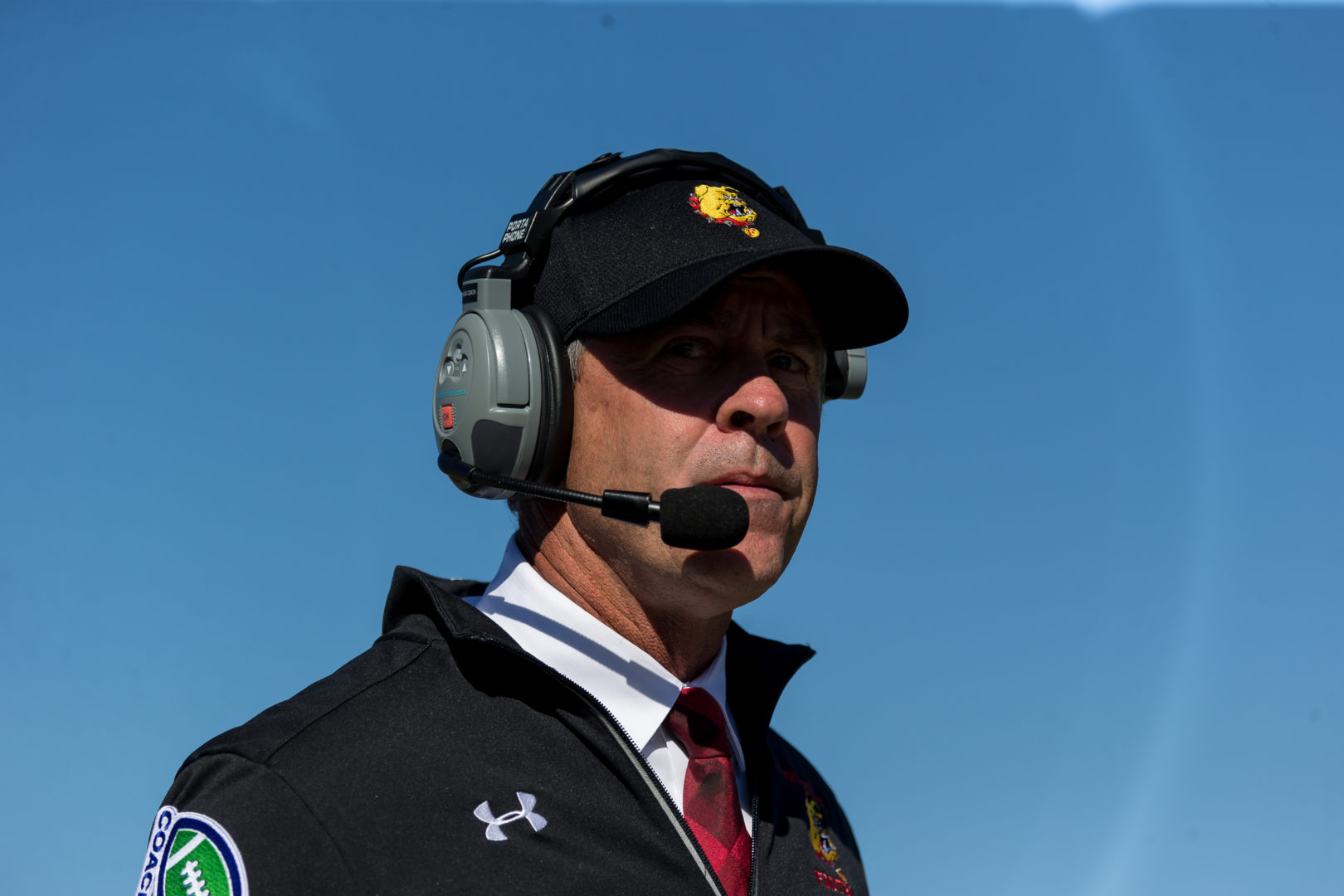 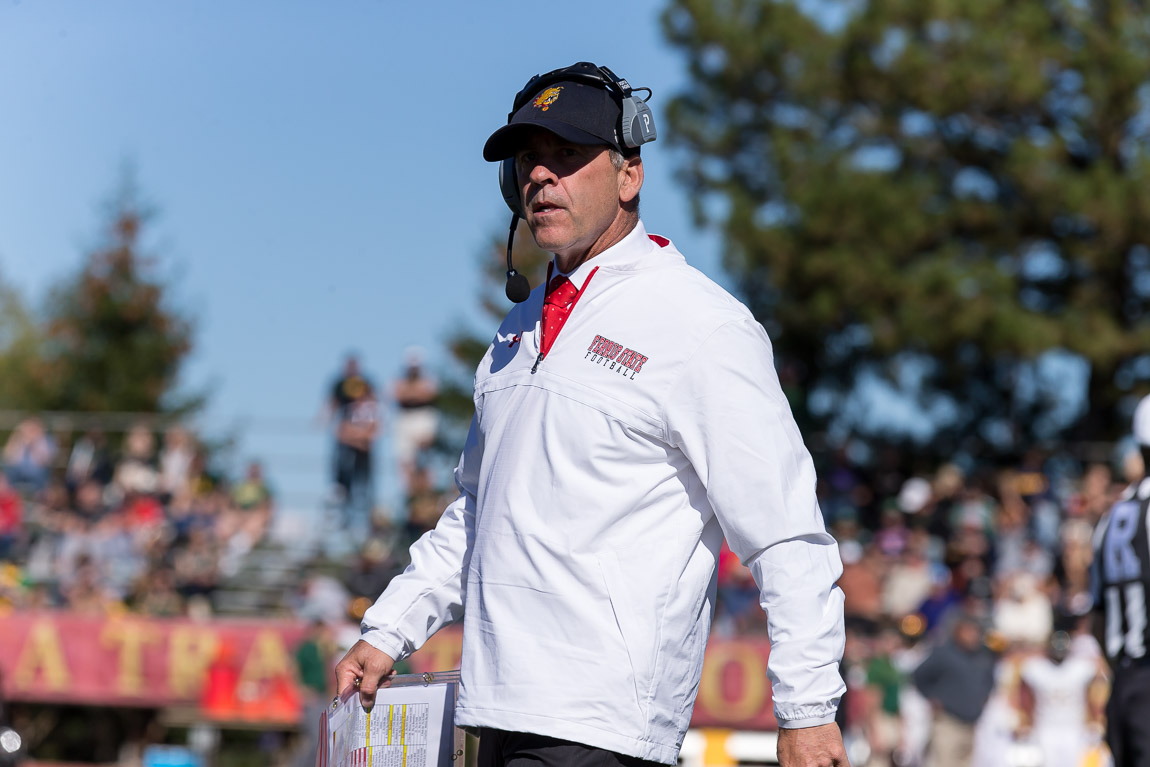 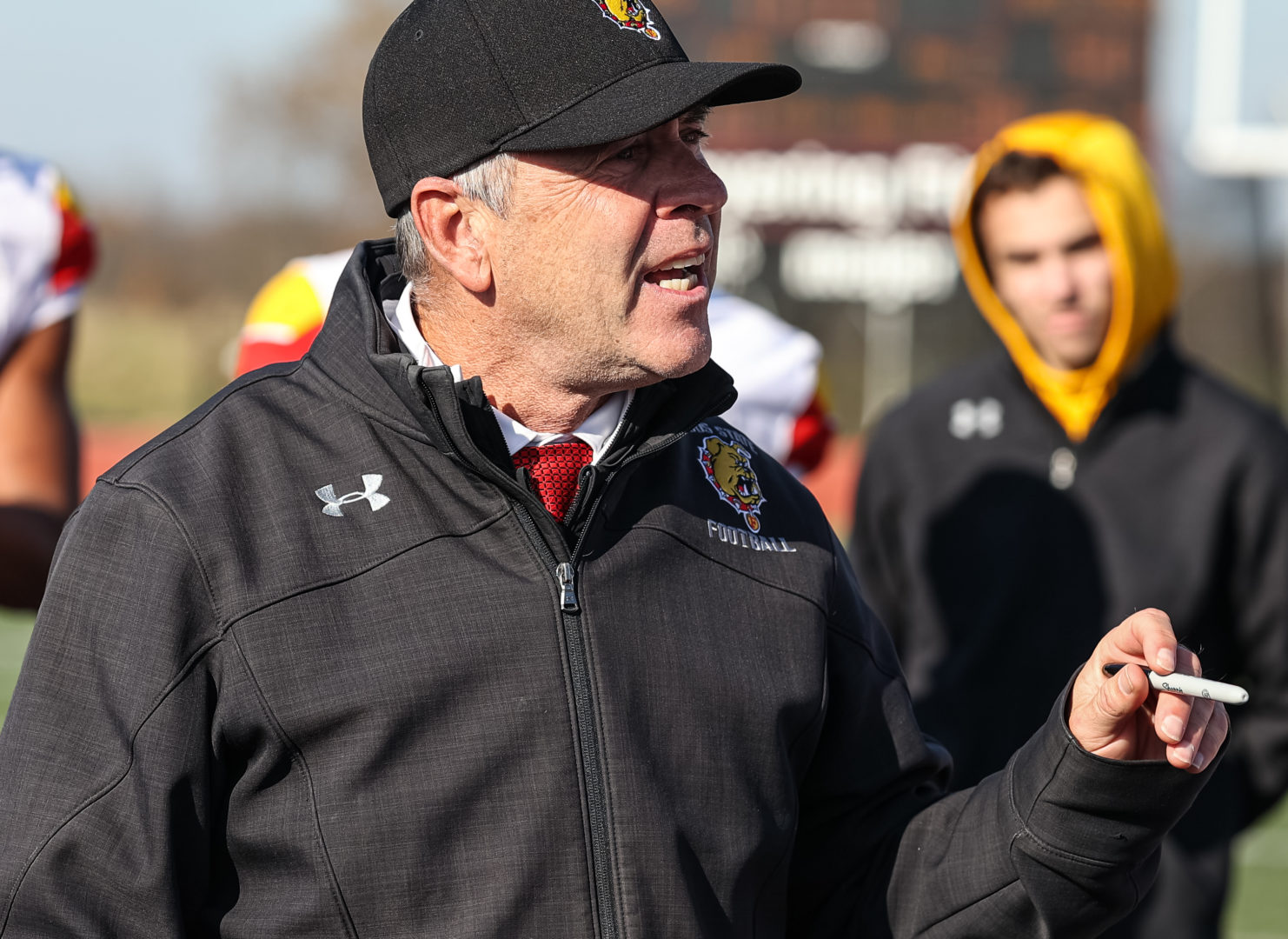 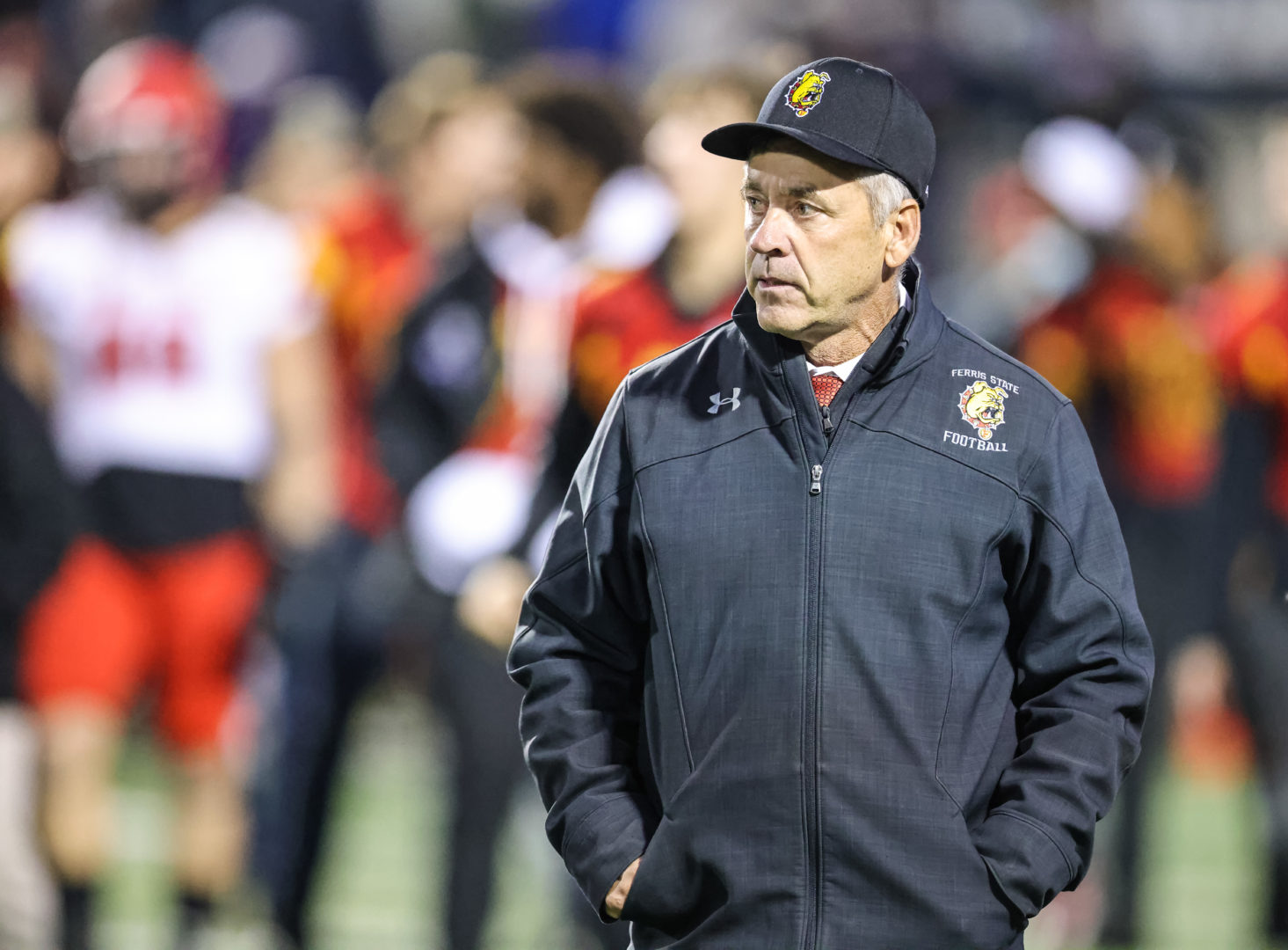 Hesperia closes football season with a 44-7 win over Shelby